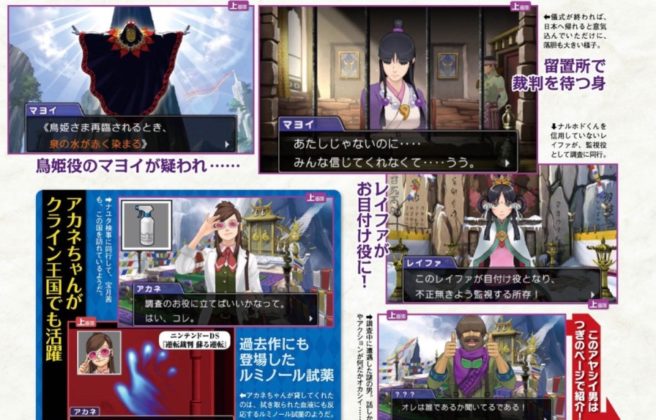 Phoenix Wright: Ace Attorney – Spirit of Justice is covered quite extensively in the latest issue of Famitsu. The magazine goes over episode 3, and introduces new characters in the process.

– Maya arrested on suspicion of murder when a priest is killed during the final rite of her training
– Both were alone at the time in the shrine
– When the murder happened, Maya was playing the role of the country’s mythical bird princess
– Said to have protected the country in a time of conflict
– The bird princess is so popular there’s a show based off of her, “Torisaman” (a play on “Tori”, bird, and “Tonosaman”, the JP name for the Steel Samurai)
– Nayuta returns to Kurain to take the case
– Ema is traveling with him
– She offers to help Phoenix in his investigation with the old Luminol magic
– Two new characters are revealed who have direct ties: Nanashiino Ganbe and Saara Aatam
– Nanashiino Ganbe: a man so amnesiac he’s appended “Tentative” to his own name
– Saara Aatam: the victim’s wife
– Aatam seems to be hiding something
– This leads to the re-introduction of the Psyche-Lock system
– Druk: leader of the revolutionary forces known
– Inga Karakhul Kurha’in: Rayfa’s father
– Inga is not only the husband of the queen but the Minister of Justice in the country, making his struggle against the revolutionaries that much more personal
– Revisualization makes its return
– Unlike AA5 where the process was shown as moving from left to right, here it’s visualized as diving “into” the screen