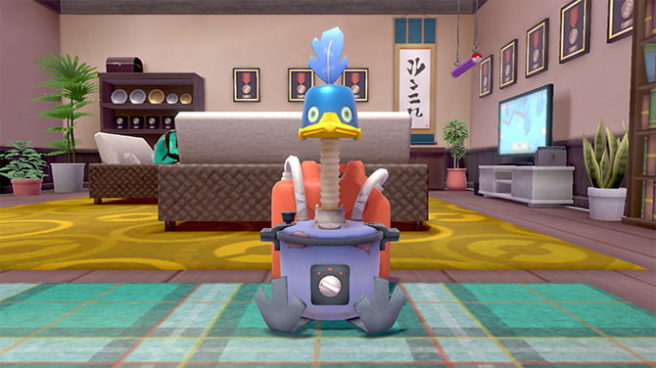 Another round of details (and screenshots) are in for Pokemon Sword/Shield. We have the official word on the latest features for The Isle of Armor and The Crown Tundra as part of the Expansion Pass, including new Galarian and Gigantamax Pokemon, tutor moves, the Galarian Star Tournament, and more.

The first new adventure unlocked by the Expansion Pass will take place on the Isle of Armor, an island of the Galar region. Many Pokemon make this island their home, living freely amid the lush nature. The island is also home to a dojo for Pokemon battles. Players and their Pokemon will train hard to become stronger under Mustard, the master of this dojo.

A Shellder bite set off a chemical reaction with the spices inside Galarian Slowpoke’s body, causing Galarian Slowbro to gain the Poison type. The Shellder that’s latched onto Slowbro sometimes unconsciously bites down harder on Slowbro’s arm, causing an itch that drives Slowbro to start wildly swinging its arm around and smashing its surroundings. With a speed that puts even the quickest reflexes to shame, Slowbro readies its Shellder and makes poisonous liquid shoot from the Shellder’s tip. This is Shell Side Arm, a Poison-type special move that may poison the target. The move inflicts either physical or special damage depending on which will damage the target more.

The power of Gigantamaxing has made Venusaur’s flower bloom so large that it covers the Pokemon’s body. During battle, the Pokemon uses these petals as a shield and swings its two thick vines around to thrash its target. Grass-type attacks used by Gigantamax Venusaur will change to G-Max Vine Lash. G-Max Vine Lash doesn’t just deal damage to an opponent when it hits—it will continue to deal damage for four turns to any Pokemon that isn’t Grass type.

Blastoise’s shell has grown to match its body, and it boasts new extra-large water cannons as well. Gigantamax Blastoise can adapt to different situations by using different combinations of its 31 variously sized cannons. Gigantamax Blastoise can also move the 12 large cannons surrounding its central cannon independently, letting it orient its attacks in any direction, whether toward the ground or the sky. Water-type attacks used by Gigantamax Blastoise will change to G-Max Cannonade. G-Max Cannonade doesn’t just deal damage to an opponent when it hits—it will continue to deal damage for four turns to any Pokemon that isn’t Water type.

Unseen Fist is a new Ability introduced with these expansions and one that only Single Strike Style Urshifu and Rapid Strike Style Urshifu possess. This Ability lets the Pokemon deal damage when it attacks with moves that make direct contact even if the target defends itself by using moves like Protect.

■ New Adventuring Featured Introduced in the Isle of Armor

The dojo on the Isle of Armor houses a unique take on recycling in the form of a device called the Cram-o-matic. If players feed it four items, it will combine them and give out a new item in exchange. Trainers can receive any of a variety of items, including Poke Balls, PP Ups, and more. Some combinations might even produce rare items.

Grassy Glide is a new Grass-type move that can be taught starting with these expansions. This move has high priority when used on Grassy Terrain.

Max Soup is a special dish made from rare ingredients you can gather on the Isle of Armor. If a Pokemon with great hidden potential drinks Max Soup, it will become a special Pokemon capable of Gigantamaxing.

Some Pokemon that Trainers are already traveling with may also gain the ability to Gigantamax.

The second area unlocked by the Expansion Pass is the snow-swept realm of the Crown Tundra. In this frigid yet beautiful landscape—with its jagged winter mountains and shining, silvery landscape—people live in small communities where they support and rely on one another. A man named Peony will appoint the player as the leader of his exploration team in the Crown Tundra and task them with investigating the reaches of this frozen land. Players will also be able to explore the depths of the Pokemon Dens seen during Max Raid Battles. What’s more, it seems several previously unseen Legendary Pokemon make the Crown Tundra their home.

Regieleki absorbs electrons to live. Regieleki’s signature Electric-type special move, Thunder Cage, fires furious bolts of electricity from its lower half, trapping opponents directly below it in a cage of lightning. Thunder Cage doesn’t only deal damage to opponents when it lands—the electrified cage will also cause damage every turn for four to five turns and prevent opponents from fleeing or being swapped out.

Regirago’s body is composed of crystallized dragon energy. With Regidrago’s signature move, Dragon Energy, the Pokemon assumes a shape similar to a dragon’s head, then fires intense dragon energy from its mouth. The more HP the user has remaining, the higher the move’s power.

Legendary Pokemon bearing strong resemblances to Articuno, Zapdos, and Moltres have been spotted in the Crown Tundra. These Pokemon seem to bear Ice-type, Electric-type, and Fire-type characteristics, respectively, and were previously thought to be the same as the Articuno, Zapdos, and Moltres seen in other regions. Recently gathered data from reported sightings and other sources about the Pokemon have bolstered the theory that they are, in fact, distinct variants.

Once every several decades, this migratory Pokemon appears in the Crown Tundra. Galarian Articuno’s signature move, Freezing Glare, is a Psychic-type special move in which the Pokemon attacks by firing psychic power from both eyes. This move may also leave the target frozen.

Once every several decades, this migratory Pokemon appears in the Crown Tundra. Galarian Zapdos’s signature move, Thunderous Kick, is a Fighting-type physical move that overwhelms the target with lightning-like movement before delivering a kick. This also lowers the target’s Defense stat.

Once every several decades, this migratory Pokemon appears in the Crown Tundra. Galarian Moltres’s signature move, Fiery Wrath, is a Dark-type special move in which the Pokemon transforms its wrath into a fire-like aura to attack. It may also make opposing Pokemon flinch.

Upon arriving in the Crown Tundra, players will encounter Peony, who has brought his daughter along on an adventure to find the truth behind tales of Legendary Pokemon in the area. Listening isn’t his strong suit, and his bold behaviour draws plenty of attention, but he has a kind side and plenty of affection for his daughter.

Trainers can team up with three other players to go on a Dynamax Adventure, where they will be able to venture into Pokemon Dens and even encounter Dynamax Pokemon. If Trainers do encounter a Dynamax Pokemon during their exploration, they’ll need to work together in a Max Raid Battle. Trainers will get a chance to catch the Dynamax Pokemon for their team if they triumph in the battle, but they’ll be kicked out of the den should they lose.

Once Trainers progress far enough in their adventure in the Crown Tundra, they’ll be able to participate in the Galarian Star Tournament, held in the city of Wyndon. In this tournament, Trainers will battle with various characters they met in Pokemon Sword and Pokemon Shield—but not just as opponents. They can also pick a teammate and tackle the tournament together.

The Pokemon Sword and Pokemon Shield Expansion Pass kicks off with The Isle of Armor on June 17. Look for The Crown Tundra this fall.