Posted on April 20, 2021 by Nicholas Serpa in Previews, Switch 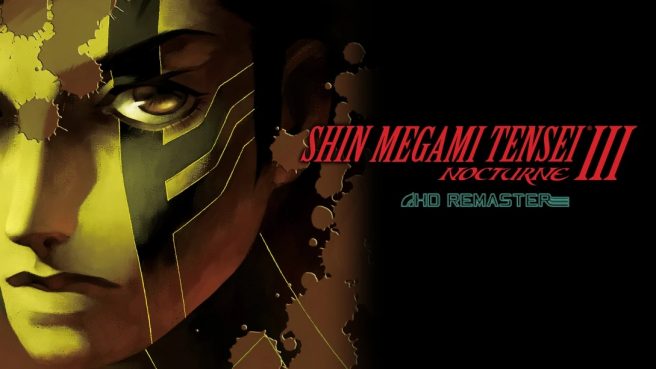 I’ve enjoyed digging into sprawling, dense RPGs ever since I was a kid, but Shin Megami Tensei has long been one of my gaming blind-spots. That’s despite me being a huge fan of the Persona series of spin-off RPGs – which are so popular in 2021 that still calling them spin-offs feels a bit reductive. So, when Atlus announced that Shin Megami Tensei III: Nocturne would be getting an HD remaster for Switch and other platforms, I was excited to finally experience a classic game in the franchise on a more modern, convenient platform.

So far, I’ve been enjoying my time with the game overall – even if it’s not quite the comprehensive overhaul that some dedicated fans may be asking for. We’ll have a full review closer to the game’s release, and at this point I’m only able to share my impressions based on the first few hours of the game, which mostly consists of a few basic dungeons designed to ease players into the game’s world and mechanics. Oh, and into the apocalypse – Shin Megami Tensei III starts off with a literal bang, resulting in the sudden and complete end of almost all life on earth.

It’s truly not even thirty minutes into the game that Tokyo is razed to ground – the world itself has folded over on top of itself Inception-style and has become infested with groups of warring demons seeking to rebuild the world in their image. Your nameless protagonist and a few of his friends are seemingly of only a handful of human survivors. Well, partially human at least – while his friends survive the incident with only some heavy trauma, the protagonist is transformed into a demon-human hybrid called a Demi-fiend and is tasked with using his new abilities to ensure the successful recreation of the world. 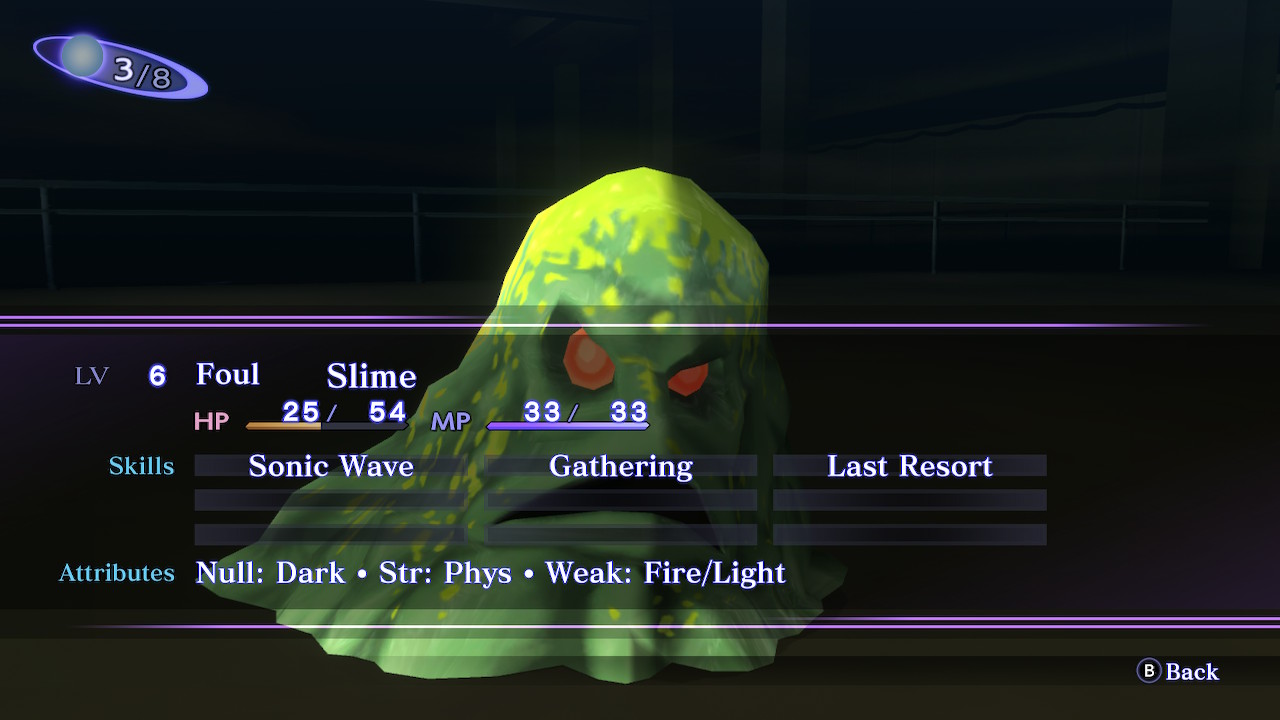 That’s the Demi-fiend’s impetus for exploring post-apocalyptic Tokyo, traversing increasingly challenging dungeons filled with hundreds of demons. As you explore, random encounters will initiate turn-based battles against these demons, in which you can either fight them to gain experience and level up or try and recruit them to your team. Recruiting demons can be risky as doing so requires negotiation, and it’s possible to get scammed by a demon and lose a lot of money, for example, or annoy them and lose your remaining turns in combat. But successfully doing so is critical – demons can be fused with each other to create new, stronger creatures with different skills that will allow you to actually have a fighting chance as the game’s difficulty ramps up.

The combat seems simple at face value, and as a Persona fan there are some definite similarities – at its core, striking enemies’ weaknesses is often the most effective way to speed through battles while taking minimal damage. But even a few hours in, the combat is beginning to ramp up in difficulty, and I’m beginning to realize that it’s going to take a lot more in the long-run than using fire attacks against ice-powered enemies. That’s because while the game rewards you with extra turns for hitting enemy weaknesses, it also won’t hesitate to take turns away from you if you, for example, attack an enemy and miss, or if an enemy exploits your elemental weakness. It’s part of what Atlus calls the “Press-Turn” system, and while it’s a simple system on paper, I’m already feeling a need to grind in the overworld to try and recruit and fuse some stronger demons. 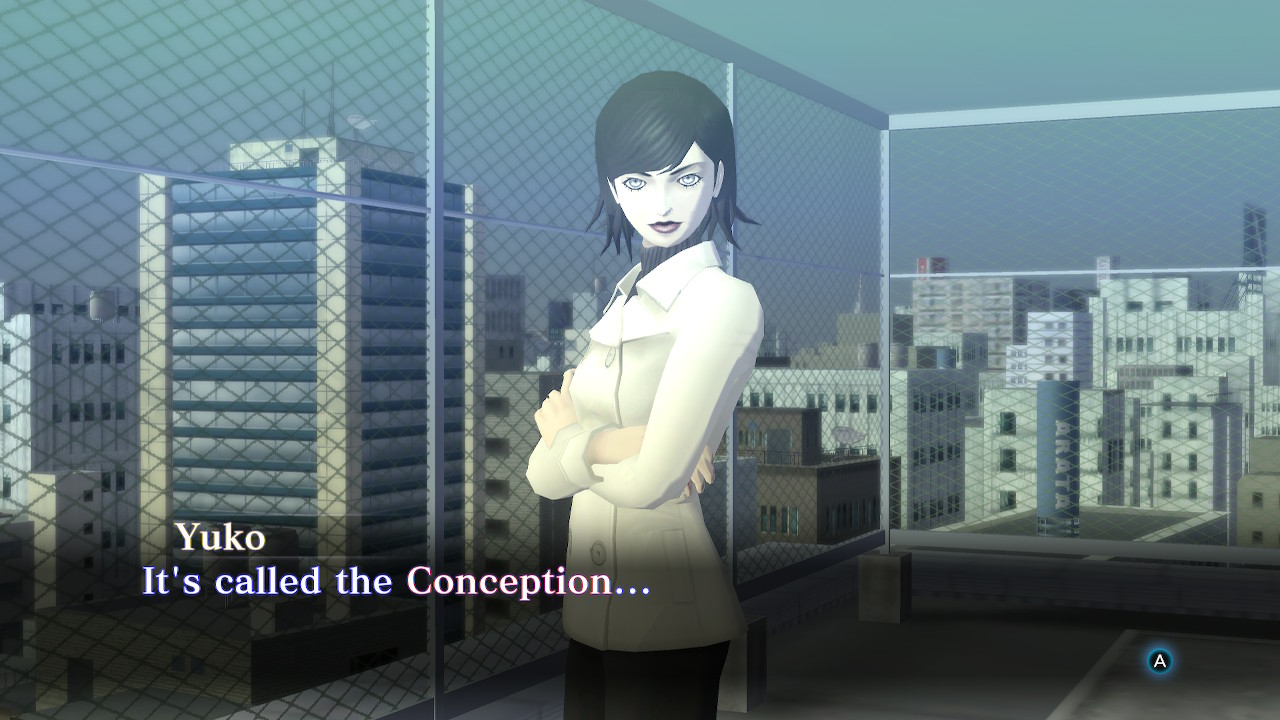 I’ve so far been playing through the game mostly on normal difficulty, and frankly can’t imagine enjoying the experience on anything harder. Save points and healing rooms are few and far between, battles occur what feels like about every thirty seconds, and the game is intentionally opaque about explaining a lot of its mechanics to you. At this point I haven’t encountered any sections of the game that truly feel unfair, but I’m just dreading that moment when I die 30 minutes away from my last save and have to redo a large chunk of the game after failing a difficult combat encounter. That said, I realize there are a lot of people out there who come to Shin Megami Tensei games specifically because of the difficulty – those people will probably love the structure and pacing of this game on its standard difficulty. Fortunately, for this HD remaster, Atlus has also included a “Merciful” mode that’s designed to make the game more approachable for new series fans. I haven’t tried this out yet and will have more detailed impressions in the full review, but Atlus says this mode drastically reduces the enemy encounter rate and minimizes the damage you might receive in combat. At what point will I inevitably cave and transition to this mode instead? Only time will tell!

There are some other notable new features added to this remastered version of Shin Megami Tensei III. Voice acting in both English and Japanese the big addition, and what I’ve heard of it so far has really added to my experience, to the point where I can’t imagine certain story scenes NOT having voice acting in the original release. There’s also a new feature that lets players create a suspend point for their games, making it easier to jump back into the game if you’re far from a save point but want to take a break and play something else on your Switch. Graphics have gotten a minor facelift, but overall, this is the same game that came out in 2003. (And yes, you can still play as Dante from the Devil May Cry series, for some reason). It’s great to have this experience on the Switch, and I think it’s probably the best platform to play this classic RPG on, if you don’t mind potentially having your ass handed to you.

Shin Megami Tensei III: Nocturne – HD Remaster releases for Nintendo Switch on May 25, 2021 for $49.99. It will also be available as a Digital Deluxe Edition with a handful of extra DLC bonus features on May 21 – four days earlier – for $69.99.