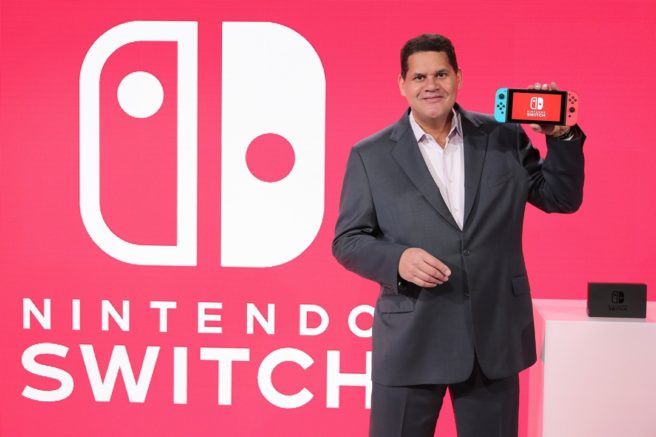 Wired caught up with Nintendo of America president Reggie Fils-Aime following the Nintendo Switch Presentation 2017. He weighed in on a number of topics about the system, such as its online service and concerns about supply. Reggie also teased that there could be news for those who already purchased classic titles – think Virtual Console – on the likes of Wii U and Wii. Aside from that, “3DS has a long life in front of it,” Reggie said.

Read excerpts from Wired’s interview below. Catch up on the full piece here.

Reggie Fils-Aime: Correct. It means that essentially you’ve got access to that game for a period of time, and then after the month there’s a new selection. You’ll have the opportunity to buy it, but [after] that month we’ve moved on to another game.

I think it would be helpful maybe to step back. Because I think it’s important there’s an understanding of the bigger vision. The bigger vision is that we are going to provide an overall online service, subscription-based, that not only will capture the multiplayer opportunity, but also the voice chat capability that we’re going to provide through a global app. We think that that’s just as important as access to Virtual Console content.

The reason for that is, it continues to reinforce our commitment to online, and do so in a way that will enable the consumer to enjoy their Nintendo Switch and to still be able to play those connected experiences—like Splatoon, like Kart, like fill in the blank—while they’re on the go. Instead of having some sort of bulky gamer headset, you’ll be able to do it right off your smartphone, put in your earbuds that you use for your standard mobile device. We think that’s a pretty sweet solution. That’s part of the overall opportunity that we see in a subscription service.

Fils-Aime: What I would say first is, we recognize that some of our most passionate fans have spent quite a bit, whether it’s with Virtual Console on Wii or Wii U, and we recognize that consumers are rightly concerned about moving to Nintendo Switch without backward compatibility. My comment is: Stay tuned, we understand the concern, more information to come.

There’s 40-some odd days between now and launch. There are more details to come. And at that point we’ll be able to define all of those various details of that online experience.

Fils-Aime: What we’ve said publicly is that there will be 2 million units that will be shipped worldwide for the launch, essentially through month one.

I know, because I read the boards and I read the comments, that there is concern about supply. From what I’ve read, the concern seems to stem from the lack of ability to buy NES Classic. So what I would say is this: Two million for essentially the first month is a huge number, especially when you look and see that this is not peak seasonality. This is essentially the first three weeks of March. Our focus is making sure that the consumer who wants to buy a Nintendo Switch can buy a Nintendo Switch. That’s how we build our supply chain, that’s how we think through the amount of product that’s available.

What happened with NES Classic is that was a situation where the global demand was well in excess of anything we had anticipated, and that’s what created shortages. The good news, at least for consumers in the Americas, is we’re going to continue to make the NES Classic available. With the ongoing level of supply, the ongoing demand is going to be met. We know the concern.

Fils-Aime: We know the popularity of our classic games. That’s a known situation. The challenge for us is that with this particular system, we thought honestly that the key consumer would be between 30 and 40 years old, with kids, who had stepped away from gaming for some period of time. And certainly we sold a lot of systems to that consumer. But what we also see here in the Americas is that we’ve sold a lot to [fans] who just saw a compact, all-in-one opportunity to get the 30 greatest games from the NES generation. I think that incremental demand is what surprised us. Because again, how many times have you purchased the original Super Mario Bros.? We thought that the consumer that already had a Wii or a Wii U and had purchased those games once or twice already, we didn’t think that they’d buy the NES Classic. And they did.

On what Switch means for 3DS…

Fils-Aime: 3DS has a long life in front of it. We’ve already announced games that will be launching in the first couple quarters of this year. There are a number of big games coming. And in our view, the Nintendo 3DS and the Nintendo Switch are going to live side-by-side. You’re going to be meeting different price points, you’re going to be meeting different types of consumers, you’re going to have the newest, freshest content available on Nintendo Switch, you’ve got a thousand-game library available on Nintendo 3DS, plus some key new ones coming. They’re going to coexist just fine. We’ve done this before, managing two different systems.

I think there’s a sense that Nintendo Switch is a portable device. It is portable. But at its heart, it’s a home console that you can take with you on the go.