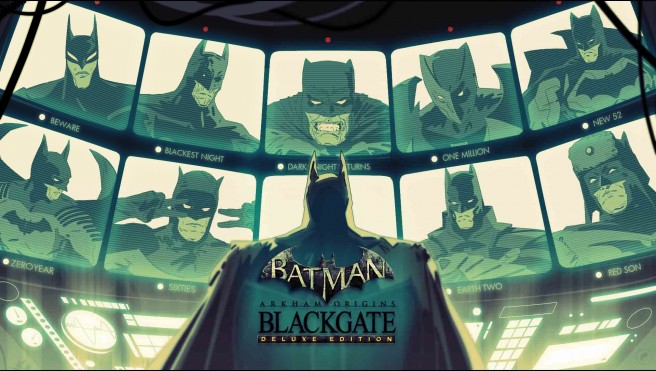 Think prison life’s bad? Having been there twice already, let me tell you, it’s worse than what the movies and books would have you think. Imagine having to shape your masticatory and gastrovascular secretionary actions around predetermined intervals of time throughout the day, with no exceptions. Imagine a life devoid of privacy in being forced to share a toilet bowl in a confined space with a burly ex-construction worker named Red. Now, with that gruesome reality in mind, picture being in a prison taken over by three maniacal super-convicts bent on causing mayhem and destruction upon their escape. Seems like just enough to drive you over the deep end, right? Well, in Batman: Arkham Origins Blackgate — Deluxe Edition for Wii U, you, the player, as the eponymous Batman, find yourself in that very peculiar predicament. 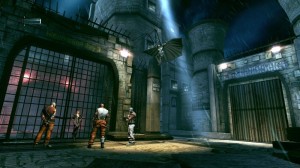 Blackgate — Deluxe Edition, a 2.5D action-adventure much in the vein of the classic Metroid and Castlevania series, is a home console port of a handheld title, and should certainly be analyzed in the context of that before anything else. Naturally, certain elements, such as environmental engagement and cinematic oomph, are lacking in comparison with what likely could have been had developer Armature Studio (industry-experienced defectors of the original Retro Studios Metroid Prime team) developed the title with a home console experience in mind. Under these parameters, Blackgate manages to succeed as a derivative of one of the most beloved (and critically high-scoring on average) game genres around. Unfortunately, its constant stream of solid, yet underwhelming gameplay and storyline elements leaves a comparatively lukewarm aftertaste from both a Batman game and adventure game perspective.

Blackgate starts out with a very dynamic tutorial pursuit of Catwoman through the Gotham skyline. In it, we seamlessly see what will unfold gameplay-wise through the rest of the title; a mix of standard 2D exploration, with simple Metal Gear Solid-esque stealth and Bare Knuckle-esque beat-’em-up segments peppered about to change things up when needed. After ruthlessly beating up Catwoman on top of a construction site, we are presented with a few animated comic book-style cutscenes of questionable artistic integrity (they do say the GamePad adds 50 years, which explains why Batman looks like he’s 120 in them). Something real bad’s going down in Blackgate Penitentiary— an Alcatraz-like maximum security prison home to Gotham’s most deviant delinquents— and only Batman (by Brother Gordon’s decree) has the means of stopping the jailhouse uprising. These stylized segments would continue throughout, and would have succeeded to a decent degree had Batman not looked so geriatric. 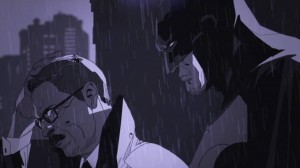 Comprised of three sections with an accompanying mini-boss and boss (Joker, Penguin, and making his series debut, Black Mask), Blackgate Penitentiary is a fair overworld in terms of size and nooks & crannies to explore, but crucially pans out as an overall nondescript setting. Coming from someone with a lot of experience in one, it really does look like a prison, or what one would look like in a completely unrealistic sense. Basically, what I’m trying to say, is, Blackgate succeeds in laying down the necessary anthill architecture and progression of exploration rhythm for what a 2D adventure game should have very astutely. Armature did a tremendous job of getting all the basics— numerous health and costume upgrades to find, the proper ratio of isolatory exploration to action— down pat. However, in terms of ultimately succeeding as a 2D adventure overworld, Blackgate Penitentiary importantly fails to engage, an area of need in the exploration genre. Room after room of banal darkness impound the desire to explore, while the boss-specific accoutrements (such as Joker’s area being filled with carnival decor) feel quite canned and boorish. The physical traversal of the jailhouse, due in part to the unquestionably solid implementation of Batman’s four unique power-ups, is more than professional in its own right, but without that basic desire, Blackgate leaves us alone on the dance floor with a fake phone number.

Blackgate Penitentiary is also unfortunately an exceedingly difficult overworld to chart. Its 3D mapping system, bearing a butt-ton of resemblance to Armature’s previous systems in the Metroid Prime series, is lacking a great deal in mobility. Though you are able to strafe and zoom while looking at it, the mapping system critically doesn’t allow for a complete rotation of view. Whereas in Prime simply rotating the C-stick would allow for a clearer vista when the map was an illegible jimber-jamber of white lines and neon-blue points, no such feature was made available in porting it from a one-stick handheld platform to a two-stick home console set-up. This wouldn’t have been a problem had the game been more linear in execution, but the high-frequency in backtracking between sections made leaning on cartography a necessity, a commodity (like Super Smash Bros. Brawl’s online functionality) that was technically present, but functionally invisible. Map functionality isn’t even implemented on the bonus GamePad touch screen; you still have to access the start menu before you can simply zoom or strafe along the map. An obvious oversight such as that comes off as lazy, and further questions the legitimacy of the Wii U’s distinctive controller. These maladies, on top of what can be a frustrating macro-traversal due to each area only having two points of entry, certainly added to the pervasive underachievement of the overworld. 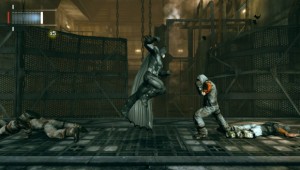 Control of the Man in Bat feels very weighty throughout, a proper fit with the gruff persona we’ve come accustomed to in his post-Clooney cinematic roles. Though the multitude of buttons and button combinations used to control Batman and his four abilities in Blackgate is a bit challenging to wrap one’s head around at first, control eventually becomes smoothly second nature near game’s end. While not quite as silky as Samus in her acclaimed Prime appearances, Armature bestowed upon Blackgate a noticeable amount of sheen, as the changing use and changing of abilities in certain gameplay scenarios felt diverse, yet easy to control. The game does a bit of “hand-holding” throughout, never missing an opportunity to notify you of a ledge to grab or, with the help of Batman’s touch screen Scan Visor, the precise item to use in a given scenario. While many purists of the genre may feel constantly patronized, the decision to utilize a plentitude of button prompts to streamline the experience was ultimately the correct decision, as the dark, realistic setting made such things hard to make out otherwise.

We see right away from our first bout of fisticuffs that the designated combat areas won’t be as precision-based a la Samus and her arm cannon, instead going for a 2D beat-’em-up style similar to arcade classics The Simpsons and Teenage Mutant Ninja Turtles. Combat is largely timing based— wait for your enemy (usually a green and orange-haired Juggalo with cornrows) to attack, dodge, and then counterattack by using Batman’s primary punch. Visual timing aids are removed in the Deluxe Edition’s exclusive Hard mode, which is my recommended mode of play. Though a sparse arena with only but a few commands to work with (there’s a roll and a flip maneuver, for example, but no combos or hugely diverse enemy types), Blackgate’s combat sections are one of the more fun aspects of the experience due to the fluidity of Batman’s dodging motions; though having to dodge from all angles and from varying distances, Batman never looked unnatural in motion despite his weighty frame. Armature did a truly notable job in making the pride and joy of the Wayne family move seamlessly in his aggressive outbursts, furthering the undercurrent of professionalism. 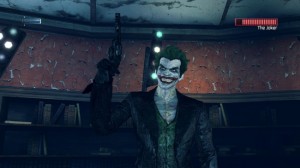 A good 2D adventure game should have within it a decent amount of musical dynamicism; each area should, hopefully, exist as a crescendo to the eventual climax of the boss fight (or, the double-pedal drop in classical movements). Unfortunately, this crucial element is missing from Blackgate in that, simply put, the boss fights all kind of stink. Most have you dodging an unnecessarily high-in-number armada of goons while trying to strategically figure out each’s distinctive weak points, a broad-brush-strokes tenet that left this convicted felon very annoyed. This pattern of irreconcilability would have been mitigated had the story provisions Joker, Penguin, and Black Mask provide in each of their segments left one weak in the knees, but Batman’s unflinchingly generic dialogue with the rest of the cardboard cast made Blackgate feel like a weaker episode of one of the Saturday morning animated series’ offerings. Blackgate doesn’t offend in its storyline, but isn’t something that will make diehard Batheads want to purchase this solely to complete canon.

A ‘Neutral’ rating means that, at the end of the day, the game in question succeeded at what it was trying to do, but not without some major flaws. If the concept and style appeal to you, you’ll likely still enjoy it, but it can’t be unquestioningly recommended to everyone.
The Recommendation?

Though rife with a underwhelming qualities, Blackgate manages to stay out of the dingy prison cell toilet bowl tier of the 2D adventure genre, but doesn’t beckon fans of both the Batman franchise or the Metroid franchise over other options. Buy this if you’re in a serious kick for an action-adventure game and have already exhausted the available supply, but with Metroid Fusion’s recent Wii U port, I can’t say Blackgate looks too swell in comparison.