While the original Blue Reflection was met with a mixed reception, it showed a mature side of Gust that involved some of the developer’s best illustrations yet accompanied by a beautiful, intuitive, and seamless user interface that really complemented the overall atmosphere. The game involved magical girls who come into their powers unexpectedly before realizing the good they can do with it. It undoubtedly took big inspiration from the likes of Persona and Final Fantasy, but the distribution of these influences felt uneven and misguided, even if it was an RPG worth talking about. Blue Reflection: Second Light now fixes a lot of the issues of what made the first game’s wholesome RPG feel more frustrating than I believe it intended to be, and thankfully serves as a standalone sequel that doesn’t need players to have any familiarity with the first entry at all. The best part is? Blue Reflection: Second Light not only feels like Gust maturing as a studio, but the team finally coming to grips with working on Switch’s hardware.

Blue Reflection: Second Light continues Gust’s formula of magical girls but in a refreshing new light as a group of students who have no real connection to each other form bonds as they’re mysteriously transported to a dream-like plane of existence where they remain in a school and world that’s been seemingly abandoned. Unsure of how or why they got there, they try their best to recoup their memories and help one another as they remember very little outside of their names. Their encouragement towards each other keeps spirits high as they grow accustomed to living there as they don’t know how or when they can get back to their normal lives. It’s not as flamboyant as its predecessor was in terms of its Sailor Moon-esque approach to design of the party, but it’s certainly a down-to-earth, feel-good time as you watch the relationships really blossom between the characters that find themselves trapped. 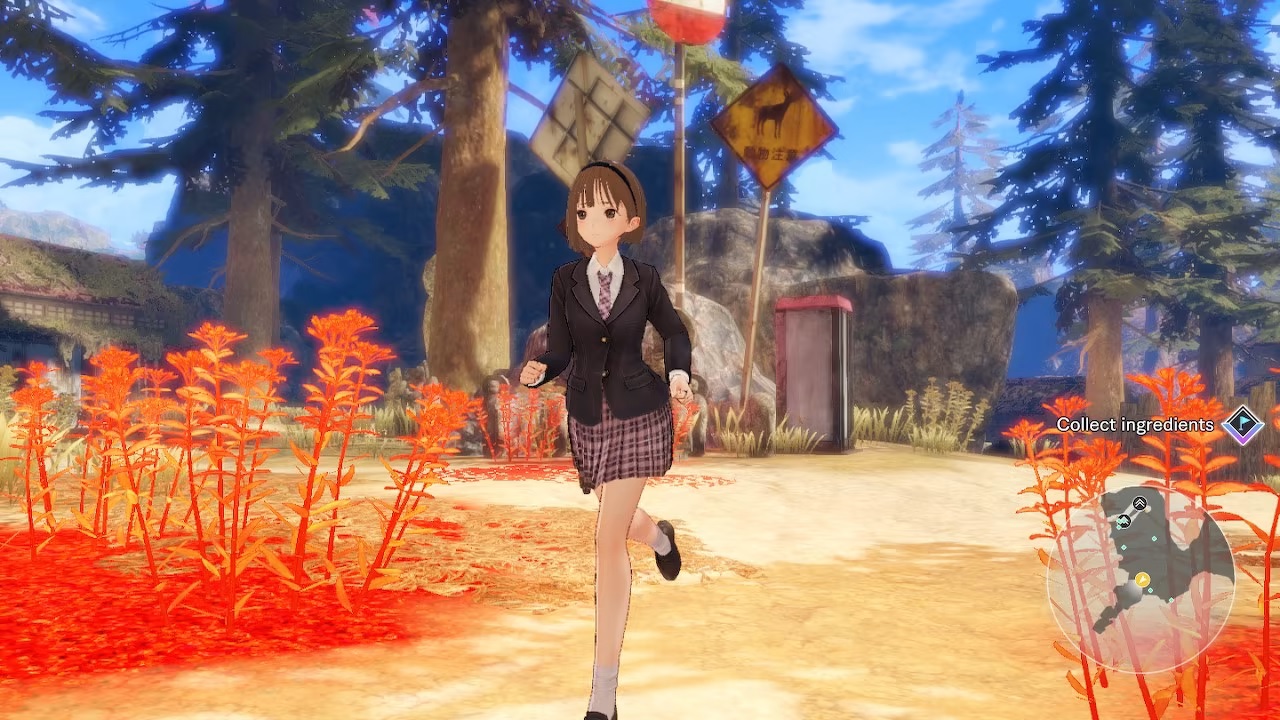 It’s not necessarily dangerous where they are, but they have to frequently go into an area called The Faraway that mysteriously appeared one day to scavenge for food and resources in order to ensure a healthy life during their time in this mysterious world. The school they currently reside in needs upkeep, so resources are necessary and the reason behind constantly going to The Faraway, though there’s one reason most important in these treks to the unknown: Memories. The memories each girl has lost have been scattered in a series of fragments, and it’s not long before they start to realize that some familiarities in various parts of The Faraway are because of the fact that they are built from those very memories lost. With those memories also come a slew of recipes that can be used to craft new types of materials and food that help with your expeditions, and to add to the wholesome nature of the game, crafting and preparing food has a cutscene that usually coincides with it having the cast of characters talk, eat, and laugh together.

As is the norm with Gust’s RPGs, those familiar with the Atelier series especially should already know what to expect going into the battle system when you find yourself on various encounters in The Faraway as you try to recover fragments of your memory, protect, and salvage any resources that you can. With a party of three, you’ll duke it out with various skillsets that define each character and complementing the others, making each member feel important and part of a larger whole. Blue Reflection: Second Light’s more recent Atelier foundations certainly shine through as the game adapts a semi real-time battle system that sees character icons going through a line to indicate turn orders that can change from move to move depending on any passives, buffs, or skills set in place that constantly influence the outcome of a fight. Though it’ll be familiar, it won’t necessarily be identical as Blue Reflection has a few other features that further give it its own flair in and out of battle, such as the transformations known as Reflectors.

These Reflectors are similar to the HDD forms that come from the Neptunia series of games in which, after a certain amount of time and/or energy, a character can transform into an ascended version of themselves that brings with it a huge increase in power that could easily sway the tide of battle. Each one of the girls involved in Blue Reflection: Second Light’s story has their own Reflector form that they can reach after a certain amount of what’s called Gears has been reached in battle. These shifting Gears as the turn orders, combos (which is hugely emphasized), and skills rack up provide a larger array of combat potential that can increase both power and frenetic nature of battles with the more Gear that’s used, which are indicated by a set of numbers on the timeline showing the turn order of battle. Each skill applied in battle also has a certain amount of Ether Recovery speed that increases your chances of quicker gears shifting in battle, meaning the quicker it becomes for you to reach higher levels for you to transform and take enemies swiftly. 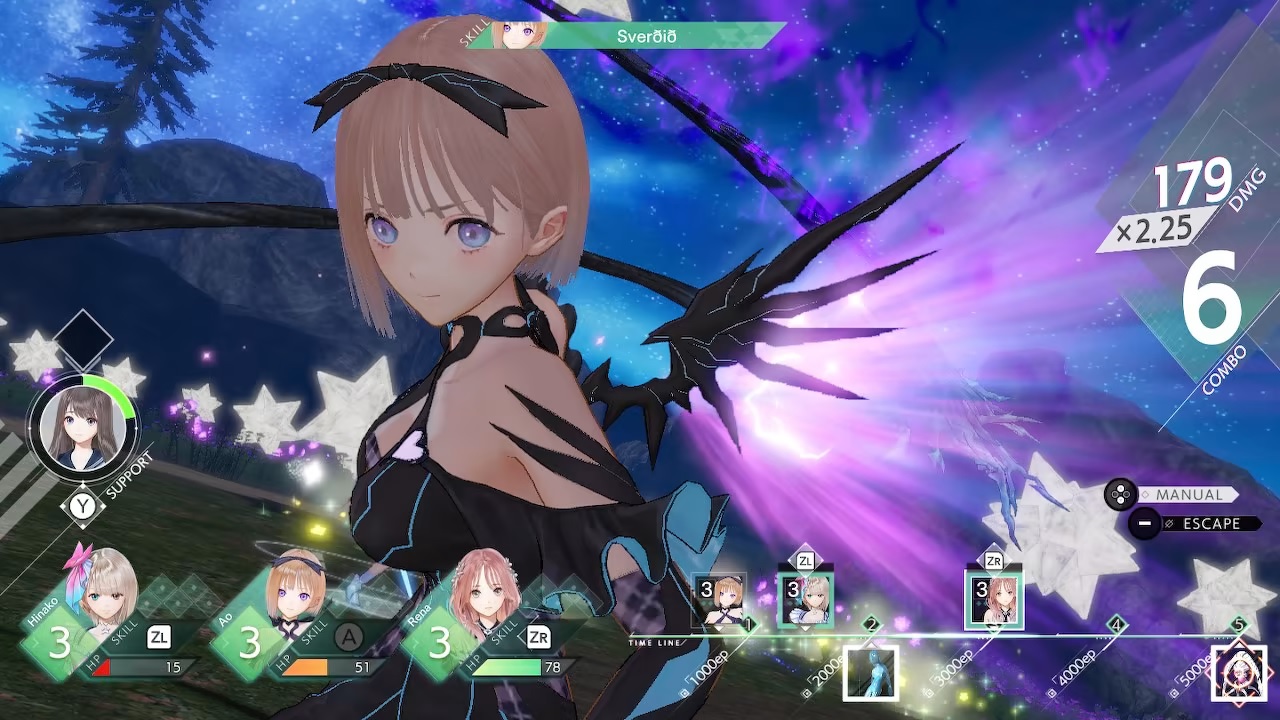 Though it adds a layer of depth to the combat system that I really enjoy, this can become a bit overwhelming when trying to manage multiple characters in a semi real-time environment, which Second Light thankfully tries to accommodate for by providing manual and auto modes in how your party members act in battle. These modes can be activated in real time to your liking whenever in combat. With this option, you won’t have to go into your settings to enable this, and instead can be flicked to manual or auto at any point in battle with the press of a button. If there are certain combos or time spent you want to take advantage of, manual is usually good for this so you can control which skills are used and when. Otherwise automatically having party members fight alongside you in battle works well too as they tend to quickly rack up damage themselves, reacting to where you are on any timeline and trying to initiate complementary moves.

The Faraway is filled with demon-like creatures that aim to destroy and corrupt, but as you scour the mysteries of this plane, sometimes you’ll run into a large group of enemies – or just some extremely powerful ones – that you’re just better off avoiding for the time being. Stealth missions in Blue Reflection: Second Light are the more story-driven scenarios of the game that have you reach certain areas without getting caught, and this also disables the ability to swing your weapons to initiate any sort of advantage of battle. I rather liked these sections a bit as it gave a bit of downtime during the usual go out for a bit, fight enemies, gather resources, and return back home routine. However, while it’s enjoyable to a degree, it’s fairly obvious that Gust is not entirely familiar with stealth. Don’t go in expecting a Splinter Cell type of approach when trying to navigate through specific areas (which thankfully aren’t all entirely linear as you can go on top of buildings, below into certain trenches, around, or directly through depending on what you feel is most optimal), especially since a lot of the movements whether yourself or the enemies you’re trying to hide from feel extremely jagged and barebones in terms of animation and application. 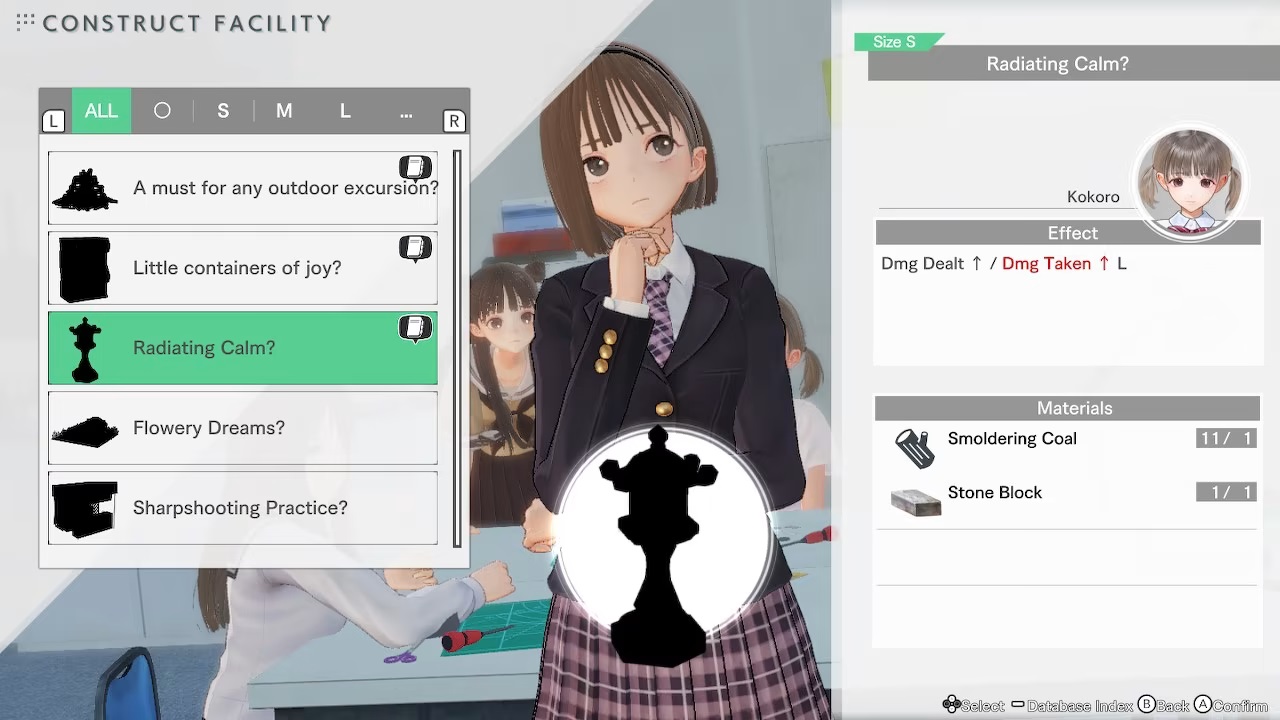 The stealth portions of the game just feel more like a blueprint than anything else, and just weren’t implemented to anywhere near the same amount of care and polish the rest of the game has, especially when it comes down to its cinematics. Blue Reflection: Second Light’s cutscenes are without a doubt the star of the show outside of its illustration, and these clearly have a lot more time and care put into them to make it feel like you’re watching something from KyoAni in terms of vibe and structure. The overall feel good nature of Blue Reflection: Second Light is consistent throughout, and the game is fun enough to see it all the way through to the end without it really ever feeling like it’s overstaying its welcome.

The most favorable part of Blue Reflection: Second Light is without a doubt its stability and performance on Switch. It’s clearly been a learning process for the team since Atelier and the developer’s other games began arriving on the console, but it hasn’t been without a fair share of flaws that, while playable, were better experienced elsewhere. There was a very clear disadvantage to playing on the Switch, even with prior releases on legacy handheld hardware, but with each new release saw better optimization and enhancements that made each new title from Gust felt like it was gaining more parity across all platforms. Blue Reflection: Second Light may be the closest yet, though omissions like depth of field, a decent amount of bloom, and poor anti-aliasing to name a few keep the game looking slightly worse despite enhancements and leveling otherwise. It just makes the entire package feel like a big step up for the studio’s comfort with the system, and Blue Reflection: Second Light’s traditional JRPG aspects make the game overall feel extremely comfortable and a joy to play on the Switch from beginning to end as you help Ao and her friends remember their past and form new friendships strengthening their bonds and taking full control over their emotions to grant the powers that they use.

Blue Reflection: Second Light is a wonderful new sequel that looks at some of the mediocrities of its predecessor and builds upon the foundation of all the things that did make it great, unique, and memorable, while stripping and learning from its less than favorable features and approaches to its design that were met with mixed receptions. While I felt the first was the closest thing to a modern day Sailor Moon game we would get, Second Light feels much more wholesome in the fact that it’s a coming of age story Gust has become all too familiar with having worked on the Atelier franchise of titles that tend to carry this theme. Blue Reflection: Second Light is also arguably Gust’s most stable port yet, and while it doesn’t have anywhere near the same amount of detail its Atelier series does in the scope of its environments, it’s commendable that the game looks and plays as well as it does given that it is fairly packed with detail and polish in the grand scheme of things.

Blue Reflection: Second Light copy provided by the publisher for the purposes of this review.