Posted on December 24, 2022 by Nicholas Serpa in Reviews, Switch 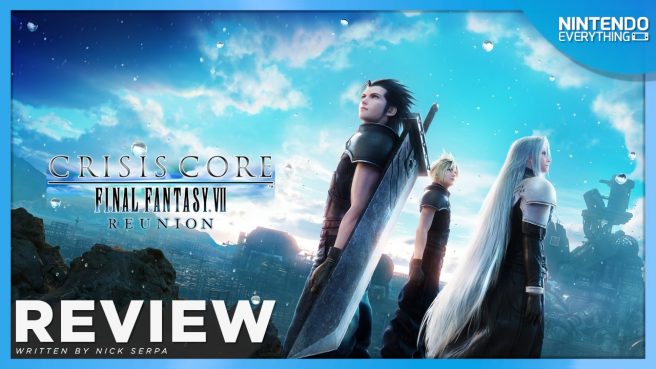 In the 25 years since Final Fantasy VII originally graced PlayStations around the world, this monumental RPG has amassed a legacy that few other games have, and has fittingly been rereleased on a wide range of platforms; it is still, even today, the best-selling entry in the Final Fantasy series of all time. The same can’t quite be said for its many spin-offs, which have typically been trapped on their original systems, but that changes with the launch of Crisis Core: Final Fantasy VII Reunion. Once a PSP-exclusive, this action-combat title serves as a comprehensive prequel to the events of the original game, and its remastered version attempts to bring the visuals closer to the style of the recent Final Fantasy VII Remake. But how does this enhanced version of a 15-year-old game hold up on Switch?

As someone who, believe it or not, has never touched the original Final Fantasy VII, I was excited for Crisis Core Reunion to act as my personal introduction to the characters and world of this classic RPG. Players take on the role of Zack Fair, a plucky, overly enthusiastic young soldier who works for the creatively named military organization called… SOLDIER. He’s essentially a high-ranking pawn for the Shinra Corporation, which maintains paramilitary control over the floating city of Midgar and harvests a powerful type of energy called Mako to keep everything running. After an elite SOLDIER operative goes missing on an assignment, Zack is tasked with investigating what happened and taking down the increasing threat of monsters appearing in and around the city. 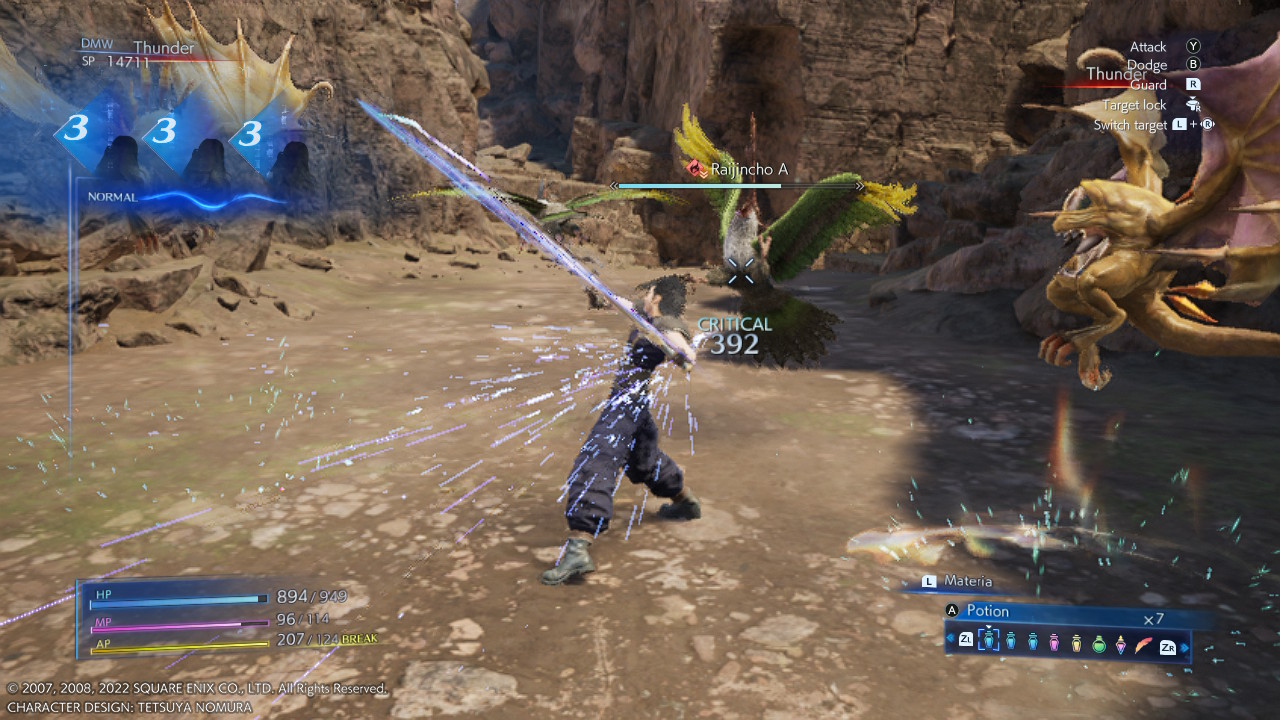 But while Zack may be the player’s conduit to the events of Crisis Core, the reality is that the game is most effective as an origin story for most of Final Fantasy VII’s main cast. It’s in this title that major characters like Cloud, Aerith and Sephiroth have their backstories fleshed out, and the tribulations and discoveries they experience throughout act as a partial catalyst to the events of Final Fantasy VII. This makes it a great entry point to the broader lore of the franchise, and by the time the credits rolled on Crisis Core, I was genuinely excited to move onto the recent Final Fantasy VII Remake to see what would happen to these characters I had fallen in love with.

While Crisis Core deals with some heavy themes that I’m sure will be familiar to fans of Final Fantasy VII – environmental decay, authoritarianism, coping with trauma, and genetic modification (just to name a few) – it’s also a silly game, thanks in part to the hokey voice acting and melodramatic writing that, I would argue, have long been part of Final Fantasy’s charm. Even by Final Fantasy standards, it can feel a bit over-the-top at times – I would often find myself laughing at story beats that would otherwise be considered serious – so I can see why some might find the overall narrative presentation a bit jarring. To me, the overall thrill of unraveling the core mystery was engaging enough that I was able to accept the silly moments alongside the rest of it. And there are a few truly heartfelt and unexpected story revelations scattered throughout that consistently surprised me, and often left me hanging off the edge of my seat. 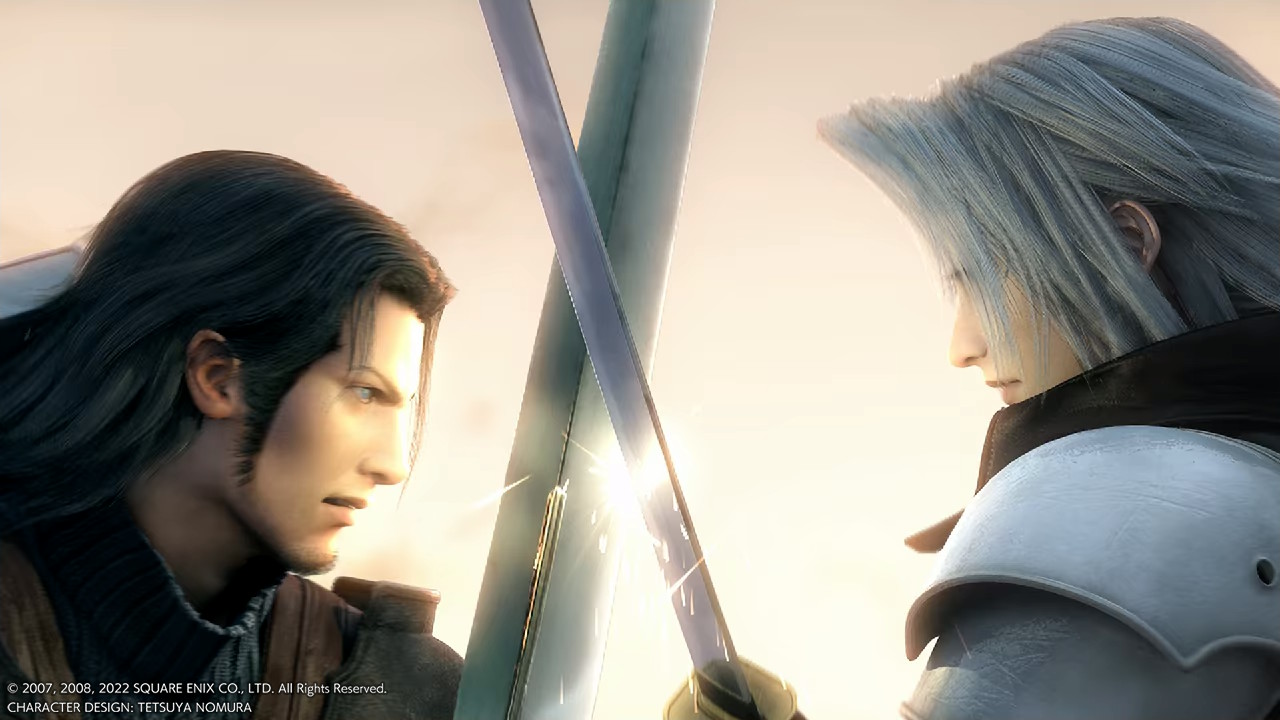 The story and gameplay in Crisis Core: Final Fantasy VII Reunion are delivered through an episode-based structure that takes players through different portions of Midgar and the surrounding world. Each of the ten chapters gives players the opportunity to explore small, semi-open chunks of the world, where the focus is tackling real-time hack-and-slash battles against tons of enemies on the way to the next story beat. While there’s not nearly as much to see and do in these environments compared to modern Final Fantasy games, there are some basic side quests scattered about that help flesh out more of the world, although they generally all just involve talking to NPCs. I wouldn’t pick up this game for the exploration alone, but there’s enough to do between the mission markers that the world of Crisis Core feels relatively grand, even if most of it is functionally just set dressing for combat.

It’s a good thing that combat in Crisis Core is a lot of fun, even if it’s not the deepest thing in the world. For most of the game, Zack can only do a few things – all that’s really required of the player is hitting the attack button repeatedly to wail on enemies, hitting the guard button to take reduced damage, and dodge-rolling out of the way. But there’s also room for added depth for those who want to engage with it. Players can equip up to six spells or physical abilities known as Materia, which deal special types of damage to foes. Some Materia deal elemental damage (ex: fire, ice, thunder), while others can be used to poison foes or prevent them from casting magic for a limited time. Other Materia can be used to heal yourself, and it’s even possible to fuse Materia together in the game’s menus to create stronger or more effective variants. Up to four accessories can also be equipped to grant additional boosts to health, strength and more. Doing particularly well in combat also has its benefits, resulting in temporary buffs to health and other attributes for doing things like completing a fight without taking damage.

I generally really enjoyed engaging with all these combat mechanics, and I found myself liking combat more the more time I spent building up my repertoire of Materia. Players can have multiple loadouts of Materia to experiment with different playstyles depending on the foe. Compared to the original release, Materia and Items are all much faster to use in battle, making the rhythm of combat feel fast and fluid. I also found the revamped HUD in Crisis Core to do an excellent at delivering all the info I needed to make split-second decisions in the heat of battle. 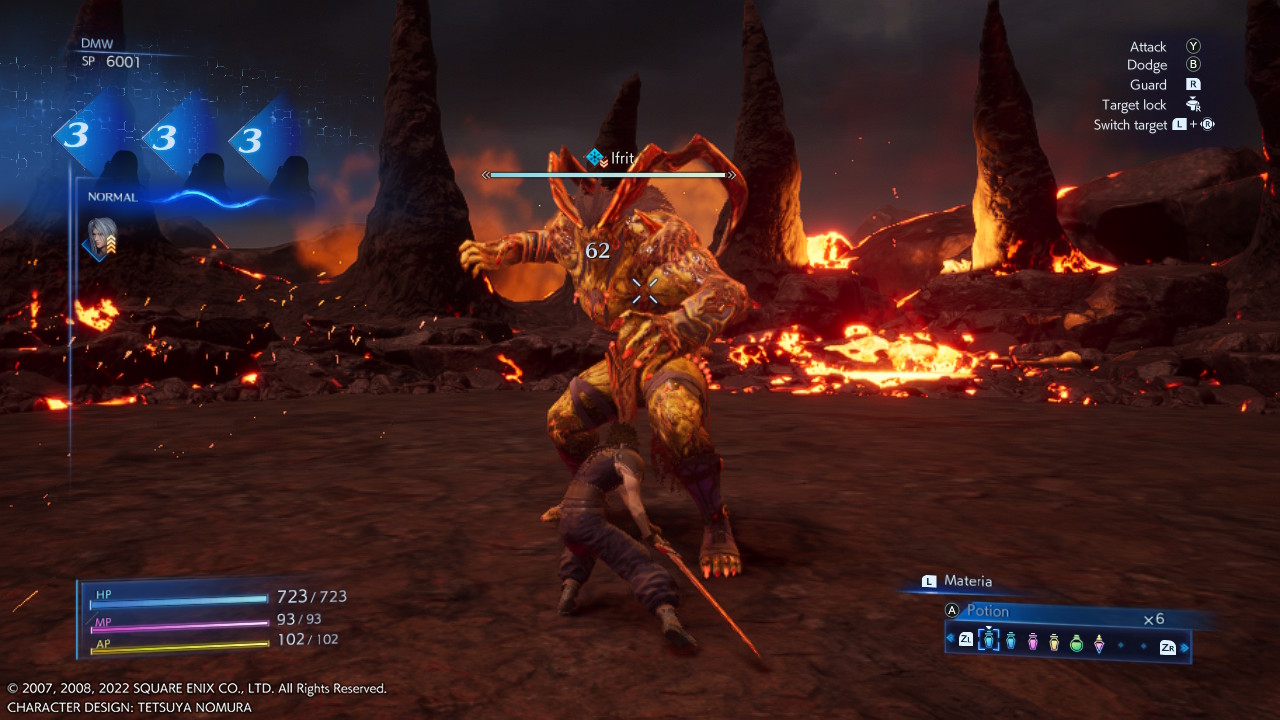 The other major element affecting combat in Crisis Core is the DMW, or “Digital Mind Wave.” This is a slot machine-style mechanic that dishes out random buffs and abilities to Zack during combat and determines when Zack levels up. I’ve never really seen anything like it – it’s interesting because it removes a layer of strategy that would normally exist in Final Fantasy games, but at the same time, its inherent randomness adds a layer of unpredictability to battles that makes everything more exciting. Summoning beasts and unleashing high-damage special attacks is entirely contingent upon when the DMW decides to let players do these things, so while it can sometimes be frustrating to take on a tough battle and be dealt poor or infrequent abilities, it can be equally satisfying to get that extra boost right when you need it most.

On top of the main and side quests, Crisis Core also has a staggering 300 bite-sized combat challenges called “Missions,” which drop Zack in a random environment and task him with fighting hordes of enemies and collecting trinkets. While there’s no need to do all these Missions unless you really want to 100% the game – they do get repetitive after a certain point – there’s good incentive to engage with them. Many of Crisis Core’s best and rarest Materia, Accessories and Summons are locked behind Missions, so completing some of them will be required for players wanting to get the most out of Crisis Core Reunion. I completed about a quarter of them during my playthrough and felt like Zack was powerful enough at that point that I didn’t need to complete any more, but it’s totally up to the player how much they want to engage with this content.

All that into consideration, my playthrough took me about twenty hours, but it could be substantially longer for those who want to see everything. The way Crisis Core Reunion is structured feels particularly perfect for the Switch. Story objectives, side quests and missions alike are all deep enough to be engaging, but bite-sized enough to feel well-suited for handheld play. I chipped away at the game on a recent trip and loved how I was always able to make meaningful progress even if I only had a few minutes to spare. 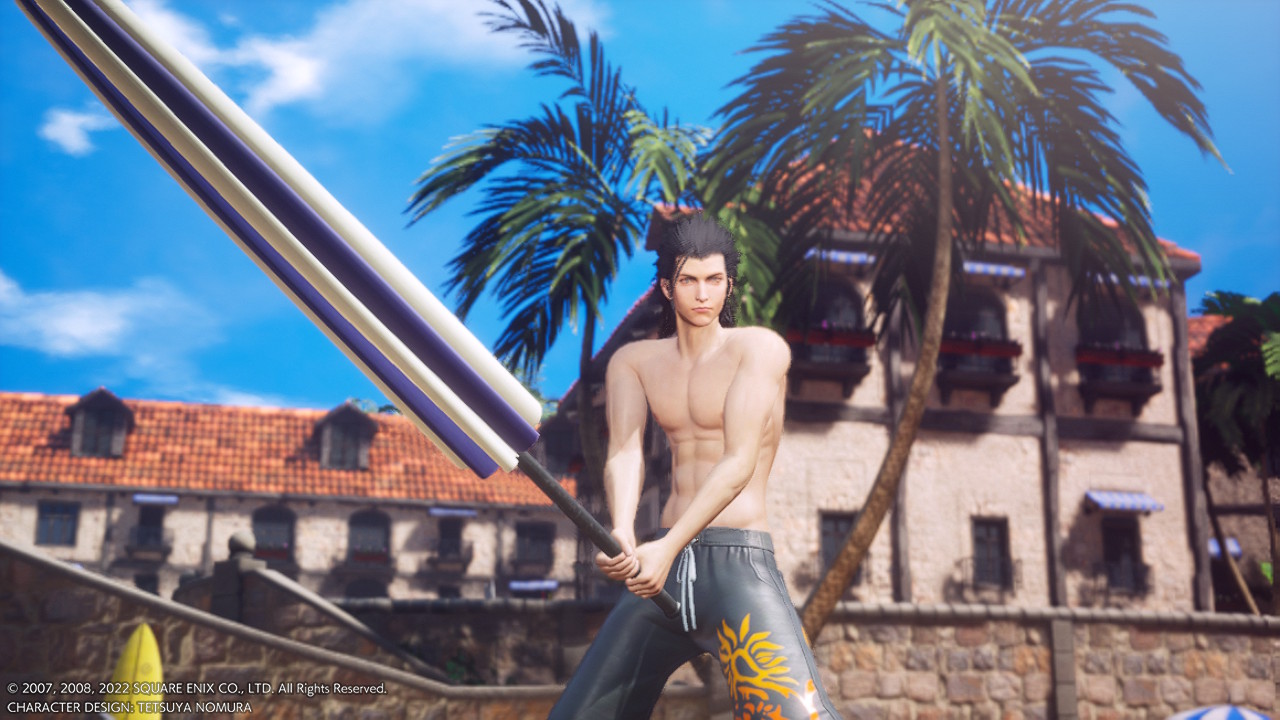 One thing I recommend is playing this game with a great pair of headphones. From pensive piano melodies to pulse-pounding rock, there’s not a single track in this game that isn’t among the best Final Fantasy music I’ve ever heard. My favorite tracks are the bombastic orchestral arrangements that play during boss battles – if you’re the type of gamer who loves hearing a choir chanting at you while you wail away at beasts ten times your size, you’ll love the score in Crisis Core.

Crisis Core: Final Fantasy VII Reunion is a fantastic effort that is so comprehensive in its improvements that it could almost be considered a remake. Character models, environments, textures, and lighting have all had a massive overhaul, to the point where the game looks shockingly close to the 2020 Final Fantasy VII Remake in many ways. The HUD and menus have also received a massive overhaul, overall being much easier to parse than in the original release. The Switch port is also immensely impressive – almost every aspect of this port looks sharp, vibrant, and fluid, to the point where this is one of the more technically accomplished Switch ports that we’ve seen to date. There are some small compromises made here and there – the game runs at a mostly steady 30 frames per second here compared to the solid 60 FPS on other platforms, and hair textures can look a bit wonky at times in docked mode, but it’s a great remaster in almost every other way.

In fact, I’d say the amount of quality-of-life-changes, mechanical tweaks, and overall refinements is simply too large to list. Just to give you a sample of the work that has been done: controls have been remapped to take full advantage of modern controllers, meaning you now have full camera control, something that wasn’t possible in the PSP release. Zack can now lock onto enemies and sprint, both changes that fundamentally improve gameplay. The script has been retranslated. The soundtrack has been rescored, and the audio re-mixed. Random encounters can now often be escaped from. Materia fusing now shows you the output of what you’re creating before you do so. Save points now restore health, MP and AP. There are now extra NPCs roaming the world. Chances are high that if you had a gripe with the original release, it’s probably been improved in Reunion.

Crisis Core: Final Fantasy VII Reunion is an excellent remaster and thrilling prequel that does a fantastic job setting up the events of Final Fantasy VII. Its action-heavy gameplay is fast and frenetic, while offering just enough depth to make tinkering with Materia rewarding for min-maxers. Exploring Midgar and the world around it is a visual feast, thanks to the greatly enhanced visuals and countless meaningful tweaks that bring significant polish to this 15-year-old PSP game. This new version of Crisis Core is perfect for Final Fantasy VII fans, newcomers, and hack-and-slash lovers alike, and the bite-sized missions and outstanding technical execution make the Switch an excellent place to experience it.

Crisis Core: Final Fantasy VII Reunion copy provided by the publisher for the purposes of this review.