Posted on February 20, 2020 by Campbell(@CampbellSGill) in Reviews, Switch 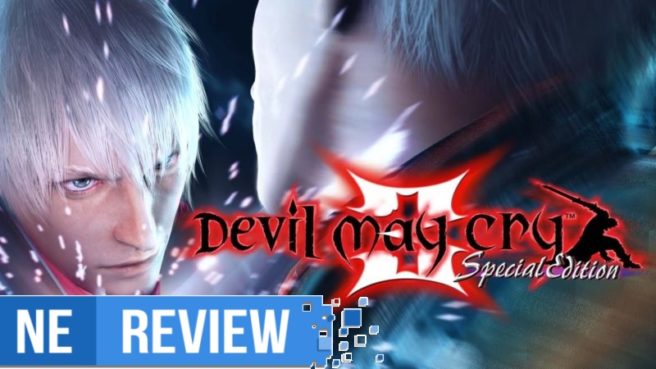 You wouldn’t be blamed for being dissatisfied with much of Capcom’s output on Switch. Many of the company’s releases are mere ports of older games that often offer little to no improvements upon their previous editions, all while being overpriced compared to other platforms. The recent ports of the first two Devil May Cry games are solid examples of that. With the third DMC port on Switch, however, Capcom has taken a different approach. This new release of Devil May Cry 3 Special Edition is more than a simple port. Rather, it features a few simple additions that completely shake up the way the game is played. For series veterans and newcomers alike, the Switch version of DMC 3 is perhaps one of the best ways to experience this action game classic.

Despite being the third game in the series, Devil May Cry 3 is a prequel to the first two games. It starts with a simple premise: just as the iconic protagonist Dante is about to open his own business, a massive tower erupts from hell and demons begin to invade the world. Seeing his brother and rival Vergil at the top of the tower, Dante assumes that he must be the one behind this and determines to stop him. Thus, Dante embarks on a quest to the top of the tower to slay every demon in his path and eventually confront Vergil. It’s a story with plenty of twists and turns that always teeters on absurdity thanks to its bizarre spectacle of violent demon slaying action. Dante himself is the highlight of the storytelling, punctuating every plot beat with his cocky attitude and constant sarcastic wisecracks, especially as the story becomes more and more ridiculous as it goes on.

Perhaps the most ridiculous thing about the game isn’t its story, but its action-packed gameplay. Devil May Cry 3 has the reputation as one of the finest action games ever made, and in 2020, that reputation certainly holds true. Combat starts out fairly simple, as Dante comes equipped with only one sword and one gun that can be combined to create a few basic combos. Dante’s arsenal soon expands with additional items and abilities, so that before long, you’ll be flying across stages and pulling off flashy combos with ease by switching between swords, weapons, and guns at will, constantly discovering new abilities to keep combat fresh. 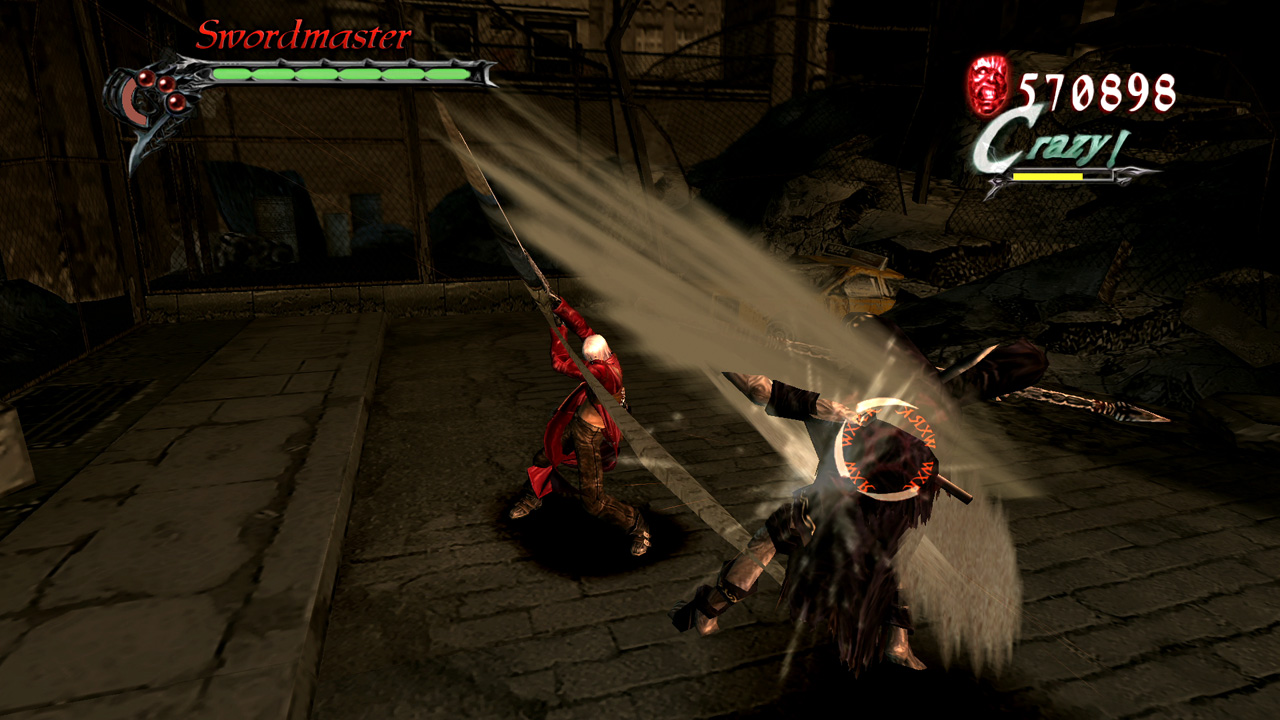 There’s further flexibility to the battles thanks to the styles system, which allows you to use different abilities depending on the style you select at the start of each mission. For instance, the Swordmaster style gives you special powers, new moves, and increased attack for using swords, while Gunslinger makes your gunplay all the more effective. It’s characteristics like these that keep your action strategies constantly evolving throughout the game’s roughly ten-hour main campaign.

That’s not to say that the game is easy; far from it. There’s a wide assortment of enemies to put your combos to the test, and many of them can certainly put up a fight. The onslaught of enemies only gets tougher as the game goes on, with some levels mercilessly hurling hordes of enemies at you at once. This can be overwhelming if you don’t know which weapons to use or how to handle combos, but if you keep a level head and take the experience fluidly and adjust your combos as you go, then there’s a thrilling, visceral flow to action.

This is where the Switch version truly begins to shine. In all previous versions of the game, you were unable to switch between your styles or weapon lineup at will. Instead, you had to pick them out manually either at the start of the mission or at specific points within levels. There wasn’t anything wrong with this design, but it did feel rather limiting. In the Switch version, however, a new mode has been included: Free Style. In this mode, you can switch up your style and weapon lineup at any time in any level with a mere click of the d-pad or shoulder buttons. That means you can toss an enemy into the air with a Swordmaster attack and then switch to Gunslinger to use a special that hits that enemy and another behind you at the same time, to list only one potential combo that is only possible in the Switch release. This new mode is simply a game changer. I did two playthroughs of the game for review: once in classic mode, which is essentially the same as previous releases, and another in Free Style. Free Style dramatically changes the moment-to-moment action, allowing you to make combos more elaborate than ever while also letting you experiment with several play styles at once, making it perhaps the ideal mode for beginners as well as a fresh way for experts to jump back into the game. 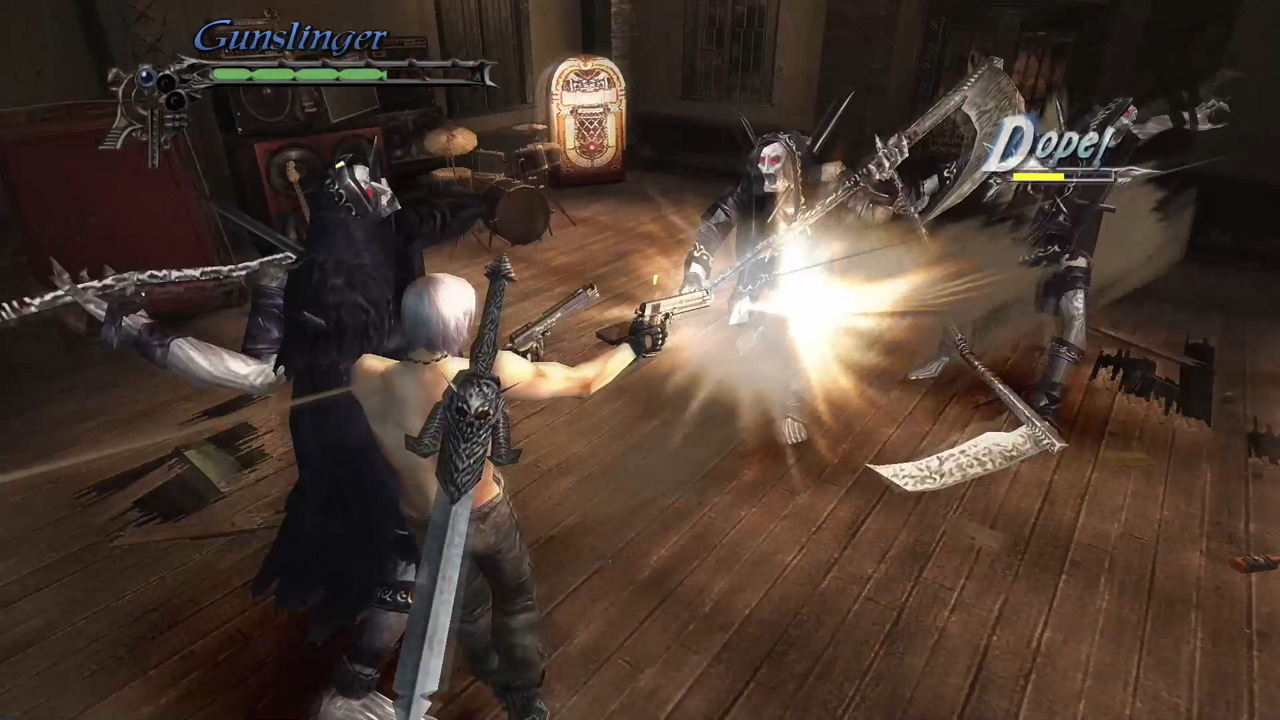 This isn’t the only Switch-exclusive content either. In addition to Free Style mode, this release on Nintendo’s console also includes multiplayer support for the Bloody Palace section, which is a lengthy gauntlet of enemies and bosses that you face one after another. Now these challenge rooms can be faced with a second player, who controls Vergil. There’s even support for single Joy-Con multiplayer, which is much appreciated for those who want some multiplayer action on the go, even if the controls are necessarily awkward when squeezed onto such tiny controllers. It might not be particularly groundbreaking for the general gameplay experience, but this little bit of multiplayer content is definitely a solid addition to the game.

And while the combat is absolutely what Devil May Cry 3 is most notable for, it’s not all that it offers. The game is divided into separate missions, and while most of these are fairly linear, a handful of them do open up and allow for light exploration. These exploration sequences can be a mixed bag, with some environments being so large that it can be easy to become hopelessly lost if you don’t already know exactly where to go to complete each objective. In between combats sequences, there are often very simple puzzles to solve. Most of these are extremely basic and merely revolve around pushing blocks around a room or revealing hidden passageways. They offer a nice distraction from the chaos of the constant action, but little more than that. It’s in these non-combat sequences that the game begins to show its age, since it retains a generally fixed camera angle that can make certain scenes awkward or difficult to follow. It’s nothing terrible, since certain scenes do allow you to control the camera anyway, but fully zoomed out cameras can still be awkward nonetheless.

The camera isn’t the only way that Devil May Cry 3 shows its age. It first released on the PS2, and its visuals certainly show it with plenty of graphical rough edges and flat textures. Much of this has been smoothed over for this upgraded re-release, and while it still looks like a game of its time, it’s also very polished for 2020. Most importantly, movement is silky smooth, running at a solid 60 fps without a single dip or compromise, allowing action and movement to flow freely. What few graphical blemishes remain are difficult to perceive on the Switch’s small screen; when playing portably, the image is crisp and silky smooth.

Devil May Cry 3 is a special kind of Switch port. While it might not seem to change much on the surface, it introduces a few changes that completely alter the way the game is played and revitalize it for a whole new set of players. The action is just as fast, fluid, and intense as it always has been, while the new Free Style and co-op modes shake things up enough to revitalize the game for a new audience on Nintendo’s console. Whether you’re a DMC veteran returning for another fling with Dante or you’re a series newcomer looking for the best introduction to the series, then you couldn’t ask for much better than Devil May Cry 3 on Switch.