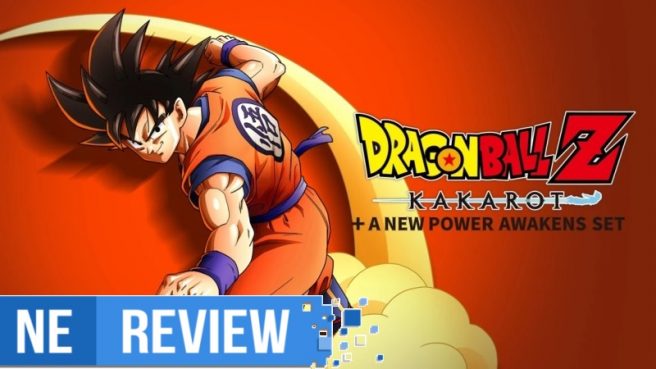 Dragon Ball Z: Kakarot again has Goku and co.’s adventures and sagas represented, but this time in a much different format that hasn’t felt this fresh and exciting in a long while. Having put almost 100 hours when it initially released at the beginning of 2020, the semi open-world take felt like a modern day Legacy of Goku mixed with the design philosophy of One Piece: World Seeker, but done so in a way that still retained the essence of the IP and left no shortage of fights for the player to enjoy and reach higher power levels with. The Switch version undoubtedly sees a few technical downgrades compared to other platforms, and it was a bit jarring at first, but after having settled with the game for quite some time now, it’s arguably Bandai Namco’s most competent Dragon Ball port yet, making for a really great DBZ experience that can now be played at home or on the go.

While Dragon Ball Z: Kakarot will be taking players throughout the entire series from the Saiyan Saga to Kid Buu Saga, it also takes creative liberty in a lot of aspects to ensure original content and quests are sprinkled throughout so it doesn’t feel like another binge of the series. Many of the game’s elements give it more of an RPG flair than the usual fighting feel, and you’ll get the hang of this fairly quickly as things begin with tutorials weaving into the narrative. You’ll get acquainted to fishing, gathering resources, how to run, fly, and read the map through a dragon radar. Not long before Raditz becomes your core focus and opponent for the opening hours of the game, Dragon Ball Z: Kakarot will also get players informed on its medal system within the game that almost functions as a sort of flexible skill tree. These medals and orbs you’ll find and acquire in various places throughout Dragon Ball’s world and story are used in a variety of ways through its Community Board system and more, where the likes of Soul Emblems can be pressed down into certain sockets of multiple categories (Fighting, Food, Money, etc.) to gain bumps and advantages within them. 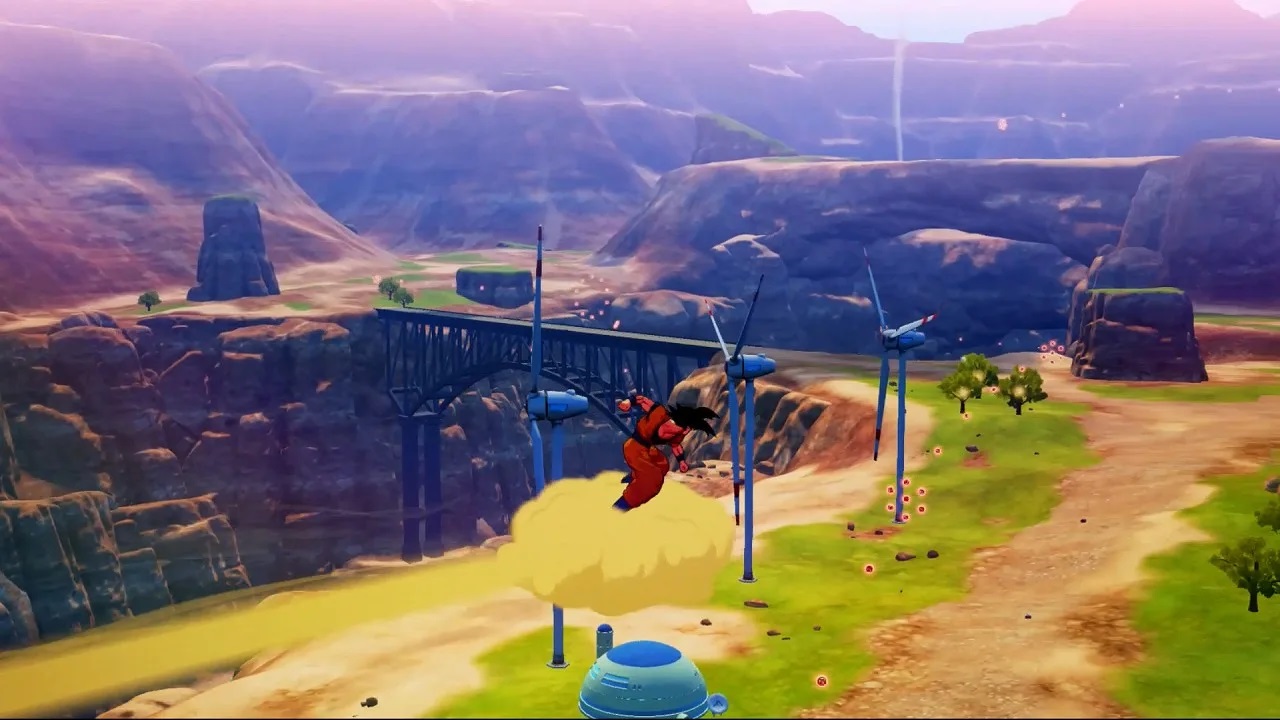 Outside of fighting, these RPG elements that help the myriad playable characters level up, learn new moves, and gain new attribute and specs make Dragon Ball Z: Kakarot an oddly addicting experience, though there are times when it can feel overwhelming to look at because of the copious amount of Z-Orbs that are scattered throughout the skies. In a way it’s a nice layout to collect these orbs to help improve stats, moves, and levels as you travel from area to area, but it can be distracting and ruin what could be a serene experience flying around and taking in the sights. Dragon Ball Z: Kakarot isn’t on the level of Genshin Impact or One Piece: World Seeker when being compared to other luscious and scenic environments with an anime aesthetic, but I do wish there was a way to disable all of the orbs and that they were put into chests or the usual capsules instead. It doesn’t help that the skies are also plagued with repetitive enemies that are portrayed as robots of the Red Ribbon Army, all with various coats of paints but with no real distinction otherwise between them as their power levels mainly vary depending on the color of the aura they give out.

Even with some creative liberties in place and feeling shallow and cheap in others, Dragon Ball Z: Kakarot feels faithful to its core and recreates some of the most iconic moments in the illustrious anime with sharp detail and excellent audio. Whether you’re flying around, hit hard objects, about to land, or surfing through menus, every single piece of audio is exactly as you remember it from the shows and done in a high quality format. It also helps hugely that the narrator of the DBZ series – also played by Gohan’s voice actor Kyle Hebert – is a big part of the game as well, helping to transition every chapter and key moment in the game by explaining the current state of events with potential foreshadowing onto what may come next. Kakarot also feels extremely accessible, so even those that may have only dabbled into Dragon Ball Z in the past or aren’t too fond of the game because of the technical nature of fighting games in general should be able to easily pick this up, as a lot of the flashiness can come from basic button presses with a combination of shoulder buttons. 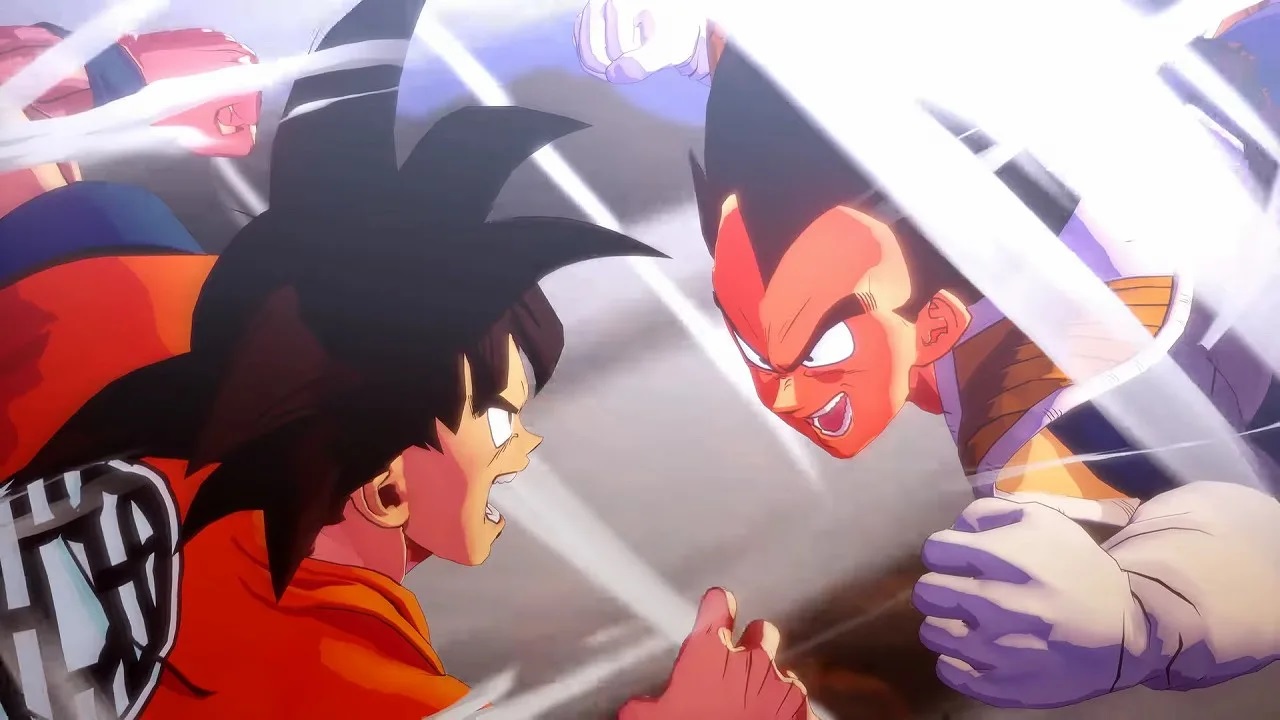 In regards to Switch in particular, the controls feels tight and optimal whether in handheld or TV mode using the Pro Controller or Joy-Con, so regardless of how you play, you’ll be comfortable. Very rarely does the Switch version also chug as it remains stable, and even being capped at 30 frames per second the fights don’t feel particularly slow or hindered because of it either. It’s nice that the game is stable throughout and even with its graphical downgrades is still an appealing and playable experience. The game once again feels like a blast to play with even though jagged edges and lower resolution remains present. For a semi open-world experience that is fairly loaded with things to do and will take most people a minimum of 40-50 hours to beat, it’s a great game to have at home or on the go for Switch. Dragon Ball Z: Kakarot also makes sure that the side quests that you can do are ones that also probably should be done, as a good portion of Soul Emblems, medals, experience, gifts, and more will come from these and usually can’t be obtained after some time has passed. It certainly adds a bit of stress to completionists like myself that can’t help but collect everything as a lot of side quests are time-sensitive and those extra items become immensely useful later down the road, but thankfully if you happen to miss one you can use the time machine post-game to clear up anything you may have missed, quest or otherwise.

One of Kakarot’s biggest upsides without a doubt is the ability to play a huge amount of characters and loadout your parties as you see fit (unless some are locked for narrative purposes) and get into fights with them and seeing how they collaborate on the field. Characters will have priorities like defensive, offensive, and support types, so depending on which you’re teamed up with they’ll sometimes take hits for you and heal you, as well as sync attacks for maximum damage when specials are performed. You can unleash powers even further by heading to the training room in the Capsule Corporation to unlock a variety of things. These are especially challenging, but the rewards are well worth it. Every location on Kakarot’s map has a reason to come back to it, and whether you’re looking for new ingredients for that special dish, fishing for rare fish, or simply scouring for the Dragon Balls themselves, Kakarot’s world is thought out enough that it makes each area count. 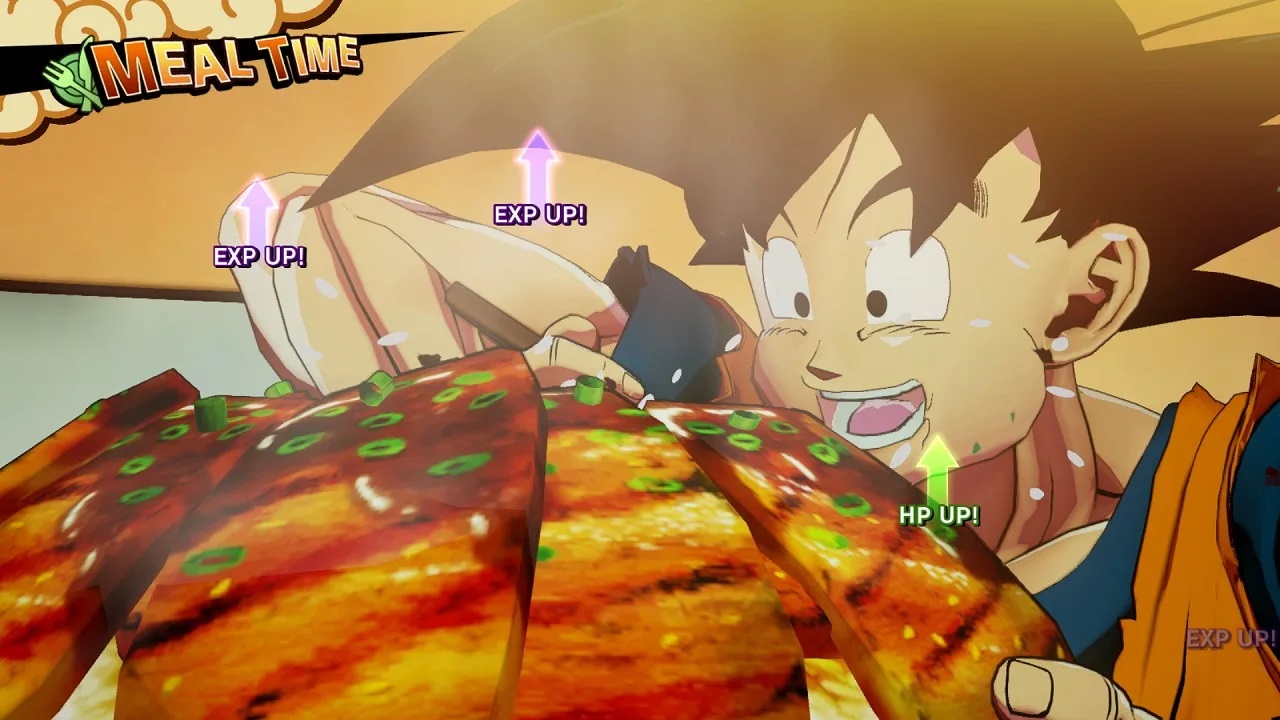 Both a benefit and a downside to the game is that while the DLC was highly anticipated to see what else we’d get in this new open-world format for the series, we ended up once again getting a recreation of the Battle of Gods, Resurrections F, and History of Trunks films. Much like the base experience, these scenarios are faithful playthroughs of what’s already previously existed, though outside of visiting other planets and timelines and the sort, I do wish there was something more original done because I think it’s safe to say most people saw this coming a mile away as it’s been done time and time and time again. Titles like Super Dragon Ball Heroes and Dragon Ball Fusions were much appreciated because of their originality, despite how weird they were, and I was hoping with the DLC that CyberConnect2 would have a little fun with it, but alas we once again find ourselves saying “maybe in the next game.”

Overall, Dragon Ball Z: Kakarot is a solid port of a great game, but the “New Power Awakens Set” is a terrible addition to the title as it’s essentially just non-exclusive DLC that includes the initial preorder bonuses, new transformations, level cap unlocks, and a few trivial bonuses. It’s unfortunate that it couldn’t have been ported as a “Complete Edition” instead with every single piece of DLC included as the Ultimate Edition still remains as a separate SKU entirely. Considering the base game can be found for roughly $20 USD now at any given moment, there’s not much incentive here for those who have already played it prior to double-dip for a high price once again. However, those that may not have access to other platforms or simply never got around to it will probably find a fair amount to enjoy here, especially if you’re a fan of the series. Dragon Ball Z: Kakarot is arguably the most faithful game for the series yet and on the Switch thankfully feels great for those wanting a unique RPG experience that emphasizes the fights more than the loot.

Dragon Ball Z: Kakarot on Switch very much preserves the integrity of its original release in all the aspects that count, but the norm with ports are that the inevitable technical downgrades will exist to get the game to run. In Kakarot’s case it’s a lot more understandable given its open-world nature, and it’s incredible to have a game of this scale on hardware like Switch. Dragon Ball Z: Kakarot mostly works well, and being able to experience that classic story and the sagas within it is a thrill. Everything that the game should be highly prioritizing it does so excellently, so fights run fluidly and loading time between zones and areas within its world map never feel like they take too long. For fans of Dragon Ball or even those looking to get into a fun semi-open world brawler with an anime aesthetic, Dragon Ball Z: Kakarot feels like the next best thing to a modern day version of the Dragon Ball RPGs that took many hours of my life on Game Boy Advance.

Dragon Ball Z: Kakarot copy provided by the publisher for the purposes of this review.