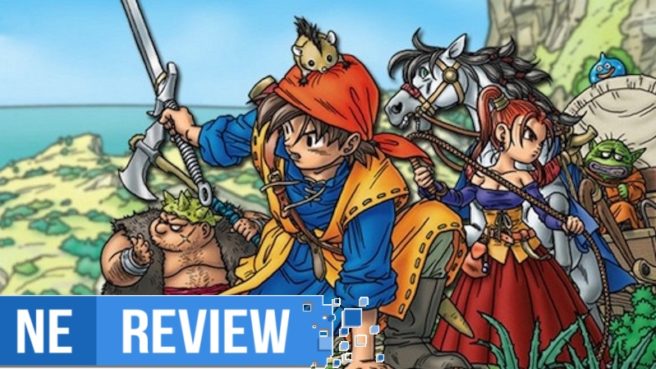 For a long time, it seemed like the Dragon Quest series was fairly underappreciated in the West. Not necessarily by its publisher Square Enix, but by the fans of its own genre. The series has usually garnered a cult following of sorts overseas all the while enjoying heavy praise in Japan. Yet to my pleasure, I’ve begun to see a somewhat recent change in that viewpoint. With the highly anticipated Dragon Quest XI on the Nintendo Switch’s horizon and the remakes of Dragon Quest VII and now Dragon Quest VIII: Journey of the Cursed King for the Nintendo 3DS, there couldn’t be a better time to get familiar with the Dragon Quest series. Dragon Quest VIII: Journey of the Cursed King is an adventure that those who are new to the series or those who are well acquainted with it won’t want to miss out on.

Our story begins with the protagonist and his pet mouse, Munchie, taking a breather after a long trek with their party. After a brief cinematic, the game quickly introduces his traveling companions: Yangus, a burly yet surprisingly friendly ex-thief who’s friends with the protagonist, and King Trode and his daughter Princess Medea, who have been freshly cursed to appear as a monster and horse, respectively. The story quickly falls into place around you: the king, his daughter, their entire kingdom, and all its inhabitants have been cursed by an evil jester known as Dhoulmagus, with the sole survivors being the newly transformed royal family and the protagonist. After getting just the right amount of backstory, the adventure begins and you quickly take control of the party and set out to investigate the first lead to Dhoulmagus’ whereabouts. This was extremely refreshing in comparison to Dragon Quest VII: Fragments of the Forgotten Past, which was almost painfully slow in its early hours. Dragon Quest VIII starts at a comfortably brisk past and maintains that speed for the majority of the game.

The story is one of the strongest aspects of Dragon Quest VIII: Journey of the Cursed King. From the beginning it grabs hold of your attention and keeps you wondering where the adventure will end up next, and adventure is definitely the most fitting word to describe the game. Compared to Dragon Quest VII, the plot is much more cohesive, and it’s easy to see each party member’s motivations for joining the protagonist’s search for Dhoulmagus. The characters the protagonist meets along the way have fleshed-out backstories and rich personalities, and traveling across the map accompanied by the sounds of a horse-drawn carriage make the game feel like a medieval road trip of sorts. As the protagonist and his party travel from town to town in the hopes of finding the next lead to the elusive Dhoulmagus, or explore caves and ruins at the request of townsfolk, one can’t help but feel excited about where the party will end up next. 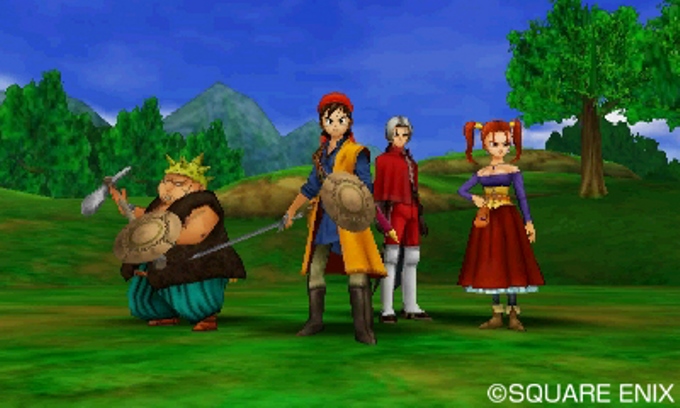 Dragon Quest VIII also features fully voiced cut-scenes throughout, and I was surprised at how many there actually were. The voice acting can be hit or miss for some of the NPCs or minor characters, but is largely enjoyable. The major characters and party members in particular are well-voiced and sound exactly how I’d imagined them to, and the voices overall add a sense of depth and whimsy that I wasn’t expecting when I first began playing. Some of the audio quality didn’t fair too well when being ported over from the PS2 to 3DS hardware, however, and while it is noticeable at times, it hardly detracts from the overall experience. This brings up the point of the 3DS versions localization, which seems largely untouched from the original PS2 version.

The traditional Dragon Quest gameplay formula is still intact with a few twists here and there to shake things up. Probably the biggest change in contrast to other Dragon Quest games is the lack of a class or job system – at least to a physical extent. The structure of the job system is more or less retained with the addition of skill points. Once a character levels up, they will be able to allot skill points to certain attributes. For example, the protagonist has skills like swords, boomerangs, lances, and courage. Once you allot a certain number of skill points to a skill, new abilities are unlocked in that skill branch. Many of these abilities are staples from previous entry’s job systems, which gives a sense of familiarity to go along with the new format. While not every party member can be extremely versatile, each party member has skills the others lack. So while the protagonist may not be able to train in axes, scythes, or bows and get the abilities from those branches, other party members can focus in the areas that don’t overlap. This makes each party member feel truly unique, as they can invest in certain skills only they can have.

Another new addition is the tension system. This system is somewhat akin to Bravely Default’s default option, meaning taking a turn to “psyche up” allows the chosen party member to build up tension. While that character is basically a sitting duck, being unable to attack or guard, the next action they perform after they’ve built up tension does increased damage. Tension can be increased up to four times leading to devastating attacks, and knowing when to balance building up tension or attacking normally can be key to many boss battles and adds a surprising amount of depth to the familiar turn-based combat. 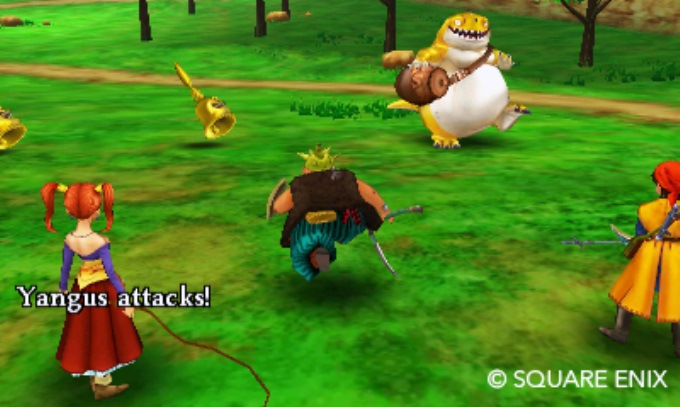 While turn-based combat returns in Journey of the Cursed King, instead of having random encounters while traversing the world map – as was the case in the original PS2 version of the game – the 3DS remaster displays enemies wandering around the overworld and in dungeons. This is a very welcome change, as having visible enemies allows you to travel at your own pace. Every monster seen on the overworld can be skipped, or if you need to grind all you have to do is grab their attention and the enemy will dash towards the party. It’s relatively easy to avoid most enemy encounters in this case, but in dungeons with tight corridors and long hallways be prepared to face a fair amount of enemies – which I appreciated, because I did end up skipping a lot battles while heading from one town to the next, but when I had to enter the next dungeon I could face enemies at a normal pace and catch up or even out on levels. While there is a small bit of what felt like necessary grinding in Dragon Quest VIII, it never really bothered me. Finding enemies was easy, and thanks to the newly added fast forward function, battles progressed at a much faster and convenient pace when I needed to hang back and round out my party’s levels.

This brings me to some of the newly added features of the 3DS version. As mentioned before, random encounters are replaced with visible enemies that wander about the overworld and dungeons. Battles play out the same, but with a new menu design to fit the 3DS’ dual screens. This makes viewing the party’s health and magic points in the middle of battle much easier, yet the menu outside of battles remains largely untouched. This isn’t a huge issue, but it does feel slightly outdated and a bit cumbersome at times, especially in regards to dealing the party’s item bag. Extra story content was added, like two new playable party members, alternate endings, new post-game content, and an all new and extensive sidequest featuring the newly added in-game photography feature. While the addition of taking photos feels like a novelty, it is still enjoyable. The camera controls well and allows for characters to pose alone, with other party members, or disappear altogether to get shots of the surrounding landscape. 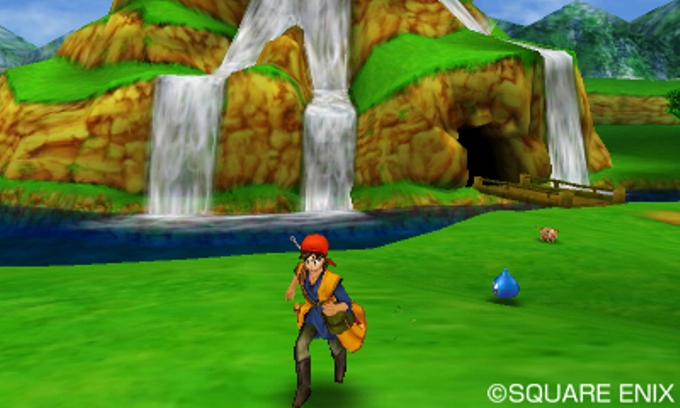 However, you probably won’t find yourself doing that too much outside of the new questline, as the graphics in the 3DS version are nothing to write home about. While the game by no means looks ugly, the downgrade in hardware is obvious compared to the original. Textures can look pretty flat and even splotchy at times, and most of the overworld landscapes look like rolling polygonal hills with a grassy texture or a rugged mountainous texture placed over them. There are pop-ins here and there in regards to trees, grass patches, or the livestock roaming about, but the models for monsters and NPCs are steady and look polished and clean. The graphical fidelity of the 3DS remake may be hit or miss for fans of the original, but the downgrade is understandable. Dragon Quest VIII, like all Dragon Quest games, is by no means a small game. The fact that the game fits into the 3DS in its entirety is worthy of praise in and of itself, and being able to take this grand adventure on the go more than makes up for the lack of polished graphics. The soundtrack of Dragon Quest VIII sounds right at home on the 3DS and is another one of the games strongest aspects. While the North American version lacks the fully-orchestrated music of its Japanese counterpart, the music in the localized version still sounds great.

Dragon Quest VIII: Journey of the Cursed King is a remake that should not be overlooked. The story and characters stand out from other classic JRPGs and truly make you feel as if you’re traveling along with an old group of friends. While the graphical quality of this remake isn’t an improvement to the original, the overall pacing is smoothed out tremendously and being able to take Dragon Quest VIII wherever you please is well worth the compromise of downgraded graphics. Whether you’re a fan of the original, or all-new to the series, Dragon Quest VIII: Journey of the Cursed King provides an adventure that is worth seeing through to the very end.