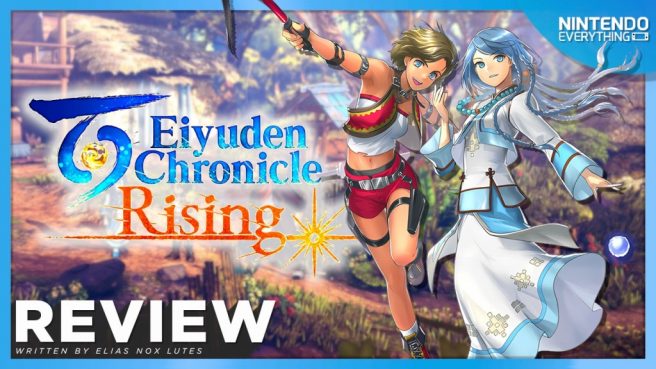 CJ is on a coming-of-age quest handed down to her from her family’s storied history as treasure hunters. Seeking out fabled riches in the recently booming adventurer destination, New Neveah, she finds out that the town is in a bit of a pinch. Using her talent for fighting and exploring, CJ begins to chase not only treasure, but the sense of community in helping the town rebuild after a recent quake. Mending the town’s ties between the villagers and the newly-arrived adventurers, a story unfolds that introduces us to the Eiyuden Chronicle universe, which is set to feature a turn-based RPG, Eiyuden Chronicle: Hundred Heroes from a legendary development team featuring Yoshitaka Murayama (Suikoden I, II) and Junko Kawano (Suikoden I, IV,) of Rabbit & Bear Studios. While this is not the main feature, they do have a lot of fans picking up this smaller companion game. So how does Eiyuden Chronicle: Rising reveal to us this new frontier of adventure?

Right away, CJ is thrust into combat to help a traveling merchant while she’s traveling to New Nevaeh. Fighting is a very simple approach in Eiyuden Chronicle: Rising with a basic hack and slash system. With the game being a side-scrolling adventure RPG, the player can run, jump, and slash enemies in order to gain experience points and items. Although the player character starts with just this simple setup, later upgrades can be utilized to increase the number of strikes in a combo, and armor upgrades can also enhance CJ and company’s other abilities, like adding an extra jump to allow access to hard to reach places. CJ can also use her twin hand-scythe weapons like climber’s picks, allowing her to pull herself up on ledges if a jump is a bit too short to land. Upgrades don’t unlock for a couple of hours of playtime in game, so it gives the player a decent amount of time to get used to the controls and learn the quest and gameplay loop. 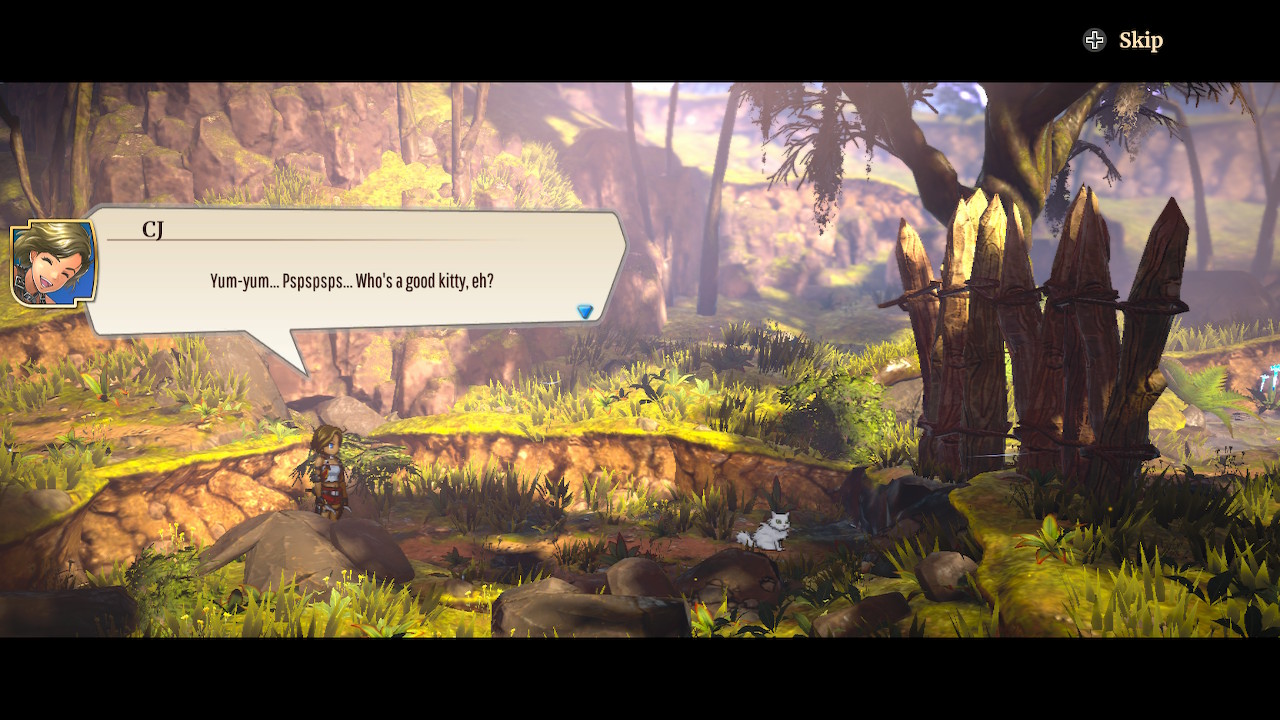 After you rescue the stereotypical lost kitty, the story progresses and two more characters will each join the team. Characters can be swapped between on your adventure with the press of a button – you can choose the slower and more powerful fighter than can land heavy blows, or a spell weaver than can blast enemies at a bit more of a distance. Each character has a different fighting flow, and when executing combos you can also utilize powerful team up attacks that quickly switch between party members for maximum damage; something quite handy when going up against tough monsters and boss fights. While grinding levels and experience isn’t really necessary, there are a lot of quests that have the team going back through familiar areas to pick up specific item drops or materials to help the townspeople open new shops, upgrade locations, and rebuild the town. This will result in a lot of passive leveling, and if you do take the time to grind, it can definitely lower the difficulty, but isn’t really necessary if you want fights to remain challenging.

The main story is progressed with a quest system, and taking on challenges either from townsfolk or the request board in New Nevaeh will allow the player to continue moving forward. While a lot of requests that open up later on are optional, completing them does net decent rewards for the effort so its worth completing them even if you’re not a 100% completion kind of player. Whether it be exploring for treasured lens relics in the ruins, defeating a wily monster, or simply collecting certain materials or items, there’s a lot to explore and discover in this adventure, but the repetitiveness of the gameplay loop could be a turn-off for many players. The abundance of early-game fetch quests can feel like quite the slog, and it does take a while for it to feel like the game ramps up.

Once crafting and upgrade open up, however, the depth of game increases exponentially. Granted, it does take a few hours of introduction to get there, but once I was able to trick out my gear I had a lot more fun. Combat got more interesting and collecting resources became more than just a chore, but a necessity to continue getting stronger. Couple that with a very interesting storyline, and you have a recipe for something that will keep you enthralled for hours. 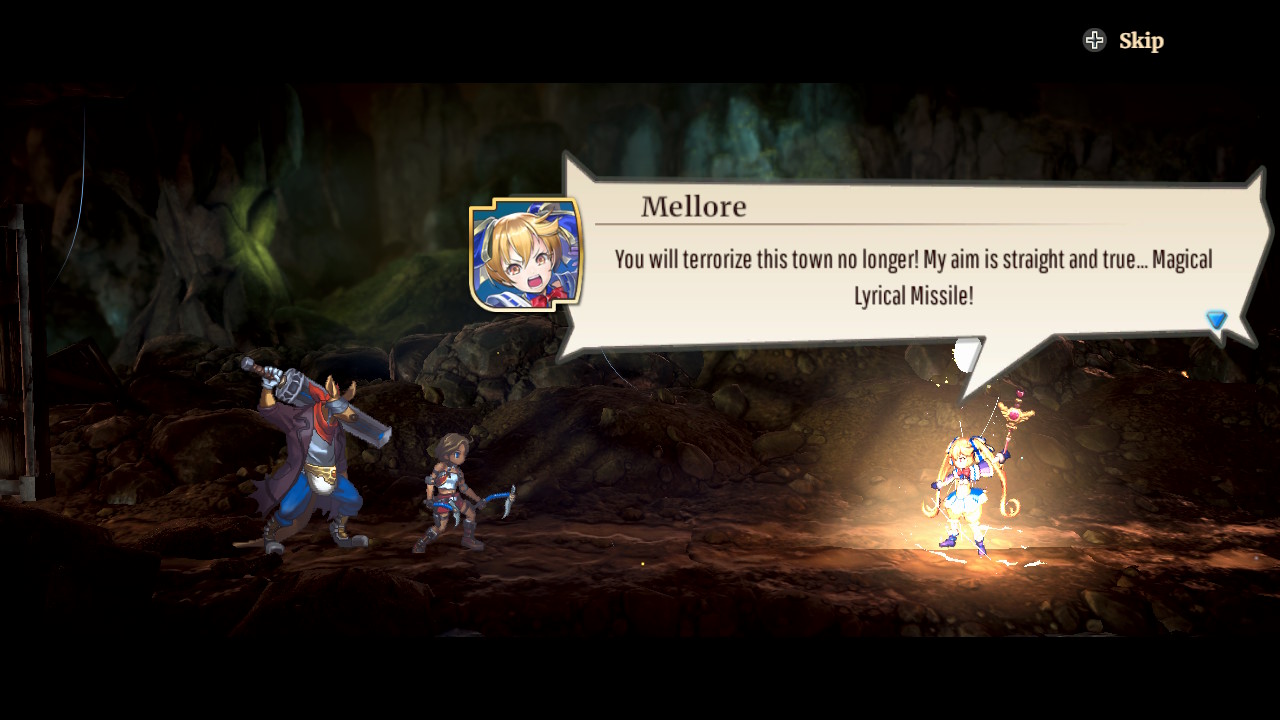 Even though beginning progress is a little slow, the most glaring issue I encountered with the game is the amount of graphical stutter that happens during combat and exploration. Frames will drop and the game will lag, and while this does not at all make the game unplayable, it is definitely a distraction and takes away from what could be a rather smooth combat system. Additionally, the art style of the characters is a little off-putting. The character sprites themselves look great, but movement is not fluid at all and it looks more like the assets of a mobile game than something released for a console – then again, this is a budget companion game, and I can’t stress enough that its your fifteen dollars, and you’re allowed to go spend that on a month of Final Fantasy XIV if you want something unarguably pretty.

Eiyuden Chronicle: Rising happens on a parallel timeline to Hundred Heroes, and though it does have its own little drawbacks, what you get for the price point is absolutely a good experience for those looking forward to the next game. For those who are not keen on Hundred Heroes, this game plays a lot like an older Castlevania game in terms of combat, and has a great little story with characters that are well-written and show true growth as the story moves forward. As an introduction to the Eiyuden Chronicle world, Rising does a great job and showing off what we have to look forward to, but it does so in a way that would likely be better if they kept the same battle system and focused more on the small issues of stutter and graphical fidelity.

Eiyuden Chronicle: Rising is not a perfect game by any means, but it is a wonderful introduction to a brand new world that players are looking forward to exploring. With the introduction of characters and systems, the title does what it set out to do – it has me hungering even more for Hundred Heroes, and craving that turn-based combat system’s methodical approach to fighting. Eiyuden Chronicle: Rising happens on a parallel timeline to Hundred Heroes, and though it does have its own little drawbacks, what you get for the price point is absolutely a good experience for those looking forward to the next game. For those who are not keen on Hundred Heroes, this game plays a lot like an older Castlevania game in terms of combat, and has a great little story with characters that are well-written and show true growth as the story moves forward. Pick this up if you’re looking forward to Hundred Heroes, or if you like side-scrolling RPGs for sure.

Eiyuden Chronicle: Rising copy provided by the publisher for the purposes of this review.