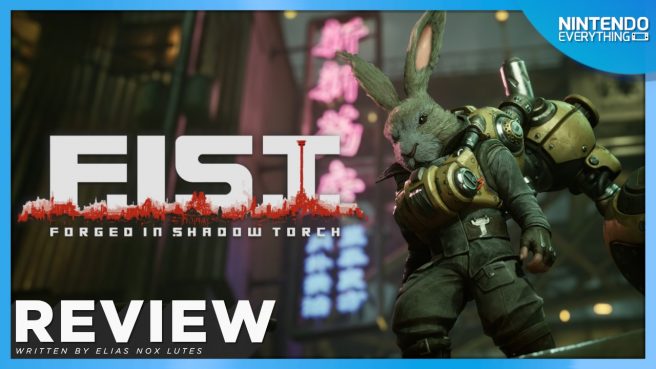 Rayton is an old retired rabbit, er hare, maybe? That aside, he doesn’t want to stir up any trouble, but when one of his friends is taken by the hostile military state, he takes up part of his old fighting suit and makes way to their rescue. The world is full of anthropomorphic creatures: cats, bears, rabbits, you name it. For those of us who grew up with stories like Watership Down, and the classic Redwall series, F.I.S.T. puts out a darker tone immediately, but settles in to being just another flavor of something that feels familiar enough. Torch City isn’t a bright and brilliantly lit town of hustle and bustle like its name might imply, but seems to be a dim and industrial city full of unrest. Immediately as you step outside, you get the feeling that you are in some sort of dystopia, and that feeling won’t fade when you see the ravages of war on such loveable animal visages.

Rayton’s controls are fairly simple in the beginning, which can make exploration feel slow and clunky at times. Luckily, the player will stumble across upgrades very quickly in the story progression, getting classic staple moves like double-jumping and air dashing surprisingly fast. Along with powered up moves for smashing doors (and faces) in, eventually the sprawling expanse of Torch City will be yours to explore. The map itself is also decently large. With many corners to explore and hidden items to collect, it’s worth poking your nose into every nook and cranny. It’s also worth trying to destroy everything that looks smashable, and jump and grapple your way up any wall that seems scalable. Your weapons do double as tools here, and mastering them will be the key to getting where you need to go, especially since the more you unlock, the tougher the enemies become. You’ll need to adjust to spikes in difficulty and really make use of your arsenal. 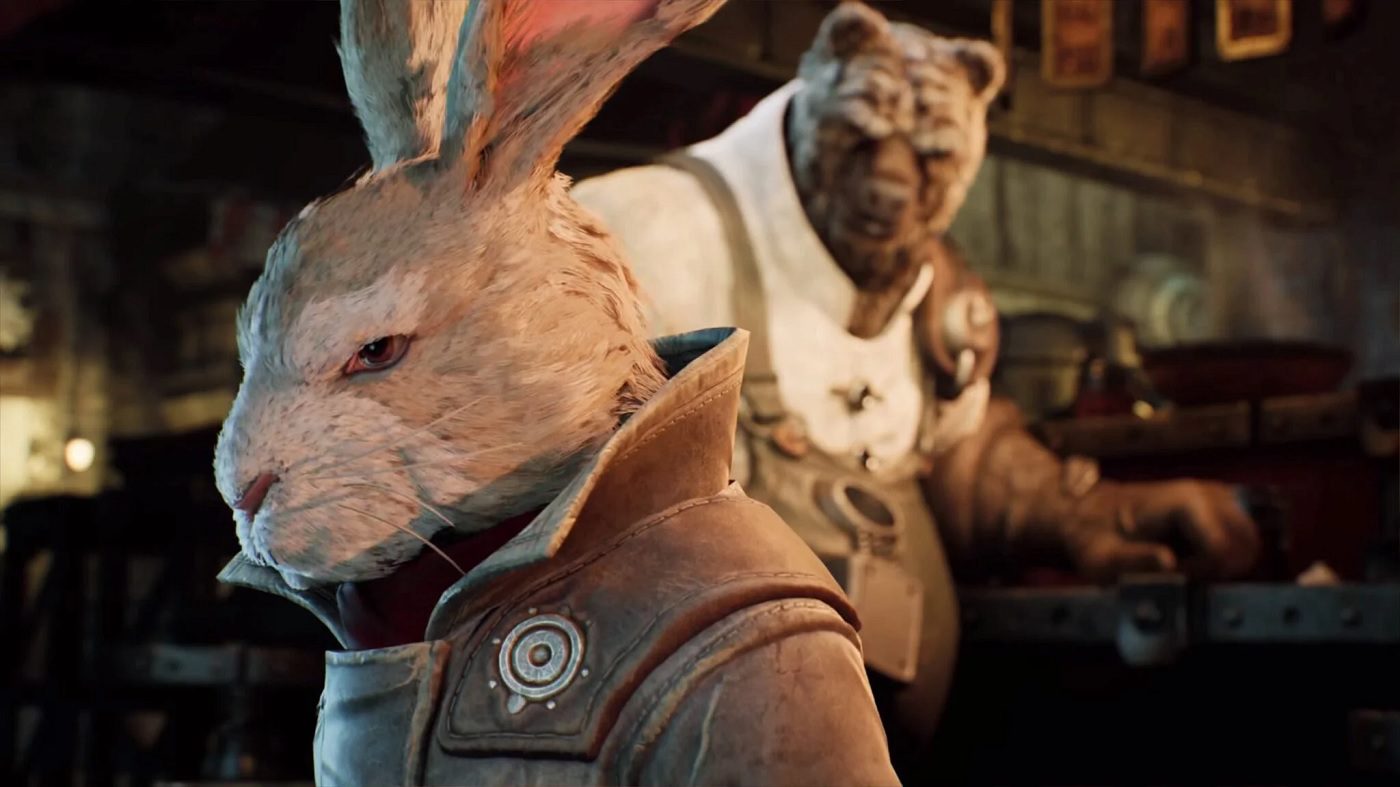 Combat is a lot of fun in F.I.S.T. After unlocking all three weapon types, the player will be able to smash into enemies with combo after combo. You can even pick up an enemy and launch them at their unsuspecting cohorts to stagger and interrupt their attacks. Figuring out how each type of enemy behaves will allow you to adapt and avoid unnecessary damage while stringing blow after blow into your foes. Use of the dash skill and using your combos in the air can also be effective. Clearing overhead of enemies charging forward, or dodging an overhead slash from a sword carrying soldier are skills you will want to build early in order to find and exploit the opening in their defense. As you smash your way through Torch City you’ll rack up a decent amount of currency. This can be used for buying shop items and upgrades to your abilities, allowing you to continue growing stronger as you face tougher and tougher foes.  Should you find yourself in a pinch, an item you find on your travels, or a healing item from the shop may come in handy. Don’t forget that your pockets can hold answers to being at 10% of your max health.

The artistic approach seems to blend steampunk and dystopian settings together. Developer TiGames’ Chinese influence can be seen in the art assets, but the decision to use animals instead of people was a big one. I did really fall in love with the lore, the world building, and pretty much every single character in this game. The writing is overall wonderful, and the storytelling flows smoothly. Along with the combat and upgrade systems, we have a wonderfully blended gaming experience in this package. So what’s the catch? Yes, there’s always a catch… 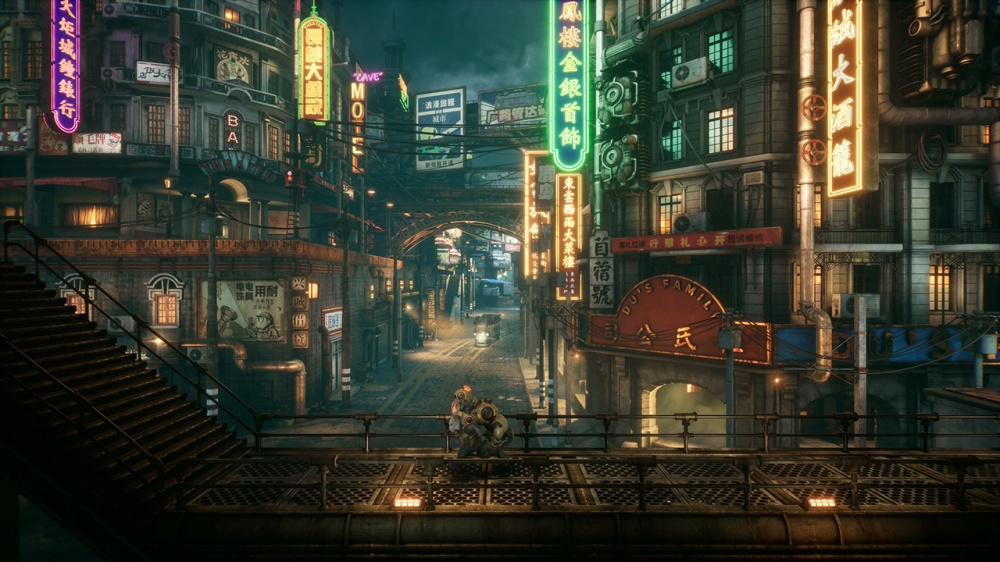 F.I.S.T. loads slowly. When changing between zones, the load screen is noticeably long. When in full combat, you may also lose frames and experience stuttering from time to time. As a mostly-mobile Switch player, I’m used to that, but many who feel that performance should not be compromised might disagree with me that it’s tolerable and say that this negatively impacts their experience in a big way. The game also doesn’t really break the mold from what you might expect from a game in the genre: there’s nothing new here that we haven’t seen before, but that’s completely okay. The game was designed for a wide audience and though it will appeal to certain players, it also is approachable enough and comfortable enough in its controls to sway even a casual gamer into giving it a shot. It feels like Metroidvania home, and as a Chinese developer’s first world wide release, I find that incredibly impressive.

Shortcomings aside, the sheer expanse of Torch City is worth a look. You will get lost, you will get frustrated, you will get a new tool, and you will go back and smash the room that you couldn’t figure out an hour ago. You will purchase the wrong upgrade, and you will lament over it until you get enough money to purchase the right one. FIST is an adventure, and its one that has its rocky paths, but the journey itself is what’s important after all, and I enjoyed mine fully.

As any Metroidvania fan will know, good controls along with decent framerate and abilities are a huge deal in side-scrolling platformers. F.I.S.T. just happens to hit all of these categories decently, with two of them getting top-notch marks. While the slowdown doesn’t make the game unplayable, it does show that there are some improvements that could still be made to the game’s performance. Load times being as slow as they are can also lead to frustration, especially since there’s a new loading screen for every transition from zone to zone, which adds up over time. Delays aside, the game runs decently enough and what you’re here for is worth the wait. If you’re not sure what to do with yourself after finishing Metroid Dread, this would be a good pick up.

F.I.S.T.: Forged in Shadow Torch copy provided by the publisher for the purposes of this review.