Posted on February 19, 2018 by Jakob Vujovic(@jakovujo) in Reviews, Switch eShop 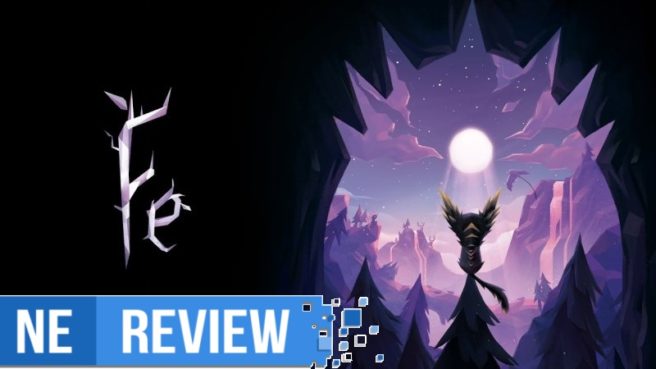 It’s is a little bit of a platformer, a little bit of a puzzle game, and a little bit of an art piece. At its heart Fe is a game about communication. It’s easy to locate among the lineage of games that are notable for pushing stories that only an interactive medium can tell: Another World, Ico, and Journey, as three pivotal entries in that genealogy. With its stylized low-poly aesthetic, soothing cello carried soundscape, and wimpy little fox character Fe feels like a game that is content being placed under the larger context of games that have been bolder and newer than it. For what it is, Fe is good. Scattered throughout its eight hour run time are a few really effective and awe-inspiring moments but even these glimpses of inspiration feel complacent in the shadows of earlier prospects.

Fe, presumably the name of fox-like creature that you guide, is a pretty wimpy little creature. It can perform a feeble hop, and it can sing. True to its lineage, Fe doesn’t have any dialogue. The story is communicated through play, visuals, and audio. Wandering around the deep woods, Fe can primarily interact with its surrounding by singing in its odd baby voice. Holding down the trigger makes the fox sustain a cry. Tilting the Joy-Con alters the pitch and intensity of that cry, in a noise that ranges from a cute little whisper to loud gurgling baby. By exploring the ever-dusky forest and entering the territories of its various species, Fe can harmonize with the creatures and borrow the abilities that allows them to interact with the unique fauna of the forest.

As this little fox learns the animal languages and the navigational abilities inherent to them, the forest branches out into a big interconnected space. The deer language, for example, activates flowers that blow glidable updrafts enabling progress into further reaches of the game world. While the it never demands the kind of focused mechanical engagement that a Metroid would, Fe echoes that style of progression and world layout. It’s just enough of a touch of conventional game design to keep the the pacing of the game steady and engaging, if a little formulaic. 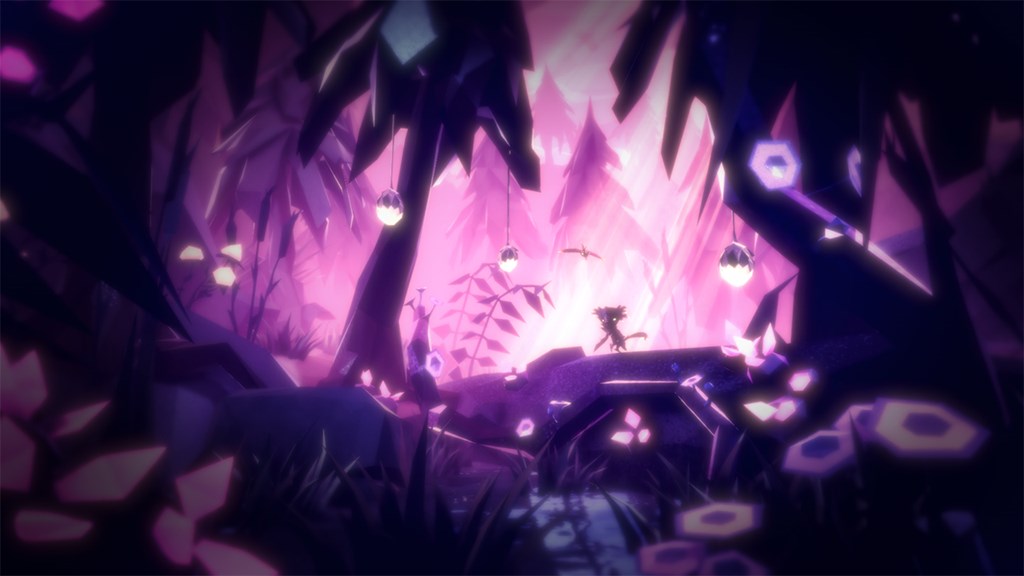 It’s really a puzzle game above all – just not a particularly complex one. As you navigate the territories and ecosystems of the various species in the forest you have to solve simple puzzles, mostly involving some strange robotic creatures that are capturing animals and generally causing problems in the forest. This always leads to helping the giant elder of that species solve their robot problem in big set piece moments, and they teach Fe their language allowing you to progress to the next territory of the forest. All of these puzzles play out pretty similarly, either involving song or hunting down certain items in the environment that dispels the nets that the robots use to capture animals. The game doesn’t stray much from this simple formula, and puzzle design rarely builds on itself.

As formulaic as progression might be, Fe‘s biggest asset lays in its art design and atmosphere. The whole game is composed of big angular polygons that are shaded in a stark purple and blue. Detail in the far distance is lost to the forest’s haze, and the palette shifts from purple, to streams of cold blue in caves, or a swampy green under the dense forest canopy implied by the heavy fog. There’s no need to worry about technical fidelity with this kind of art style, so the environment on screen always has a striking and somewhat abstract composition. The game is always visually enrapturing, and on this quality alone it’s easy to lose yourself in its unique portrayal of the undisturbed natural world. At least, it is when the game’s frame rate isn’t struggling. In handheld mode where I played most of the game, it struggles to reach 30 frames per second even at the best of times. From briefly trying it docked it seemed to perform just as poorly. For a game that wants you to just wander at your own pace these technical issues aren’t so bad that they ruin the whole, but they are pretty much constant.

Fe is satisfied sitting in the legacy of bigger and bolder games rather than trying to push anything forward. Everything in its game design feels intended, if not a little derivative and undercooked. Where it really excels is as a piece of interactive visual art; its polygonal visuals with bold, evocative color palettes does a lot with very little. If you can get over the near constant frame rate issues in the Switch port then it’s a very competently executed but pretty ride.

Fe review code provided by EA for the purposes of this review.