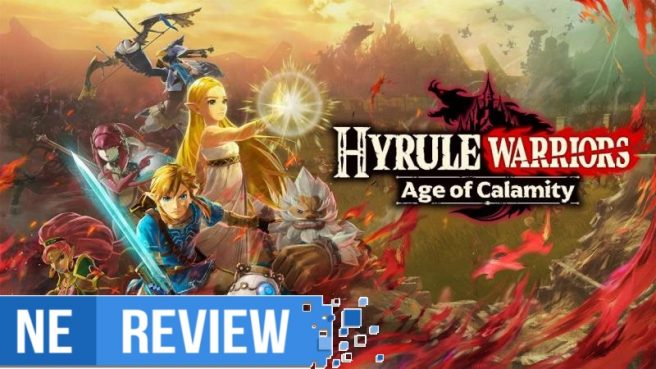 In true Musou/Warriors fashion, the original Hyrule Warriors was Koei Tecmo’s take on a completely original story that introduced new characters like Lana, Cia, and Linkle and saw a darker, more mature take on the Zelda IP. Omega Force used the studio’s hack-and-slash prowess to give us one of the most intense and action-oriented Zelda titles to date, and now the follow-up takes us back – way back – to long before the Calamity plagued Hyrule in the timeline of Breath of the Wild. The game brings with it the usual Musou greatness Omega Force is known for while featuring Breath of the Wild’s aesthetic and storyline instead of the more stylized Musou approach that we saw with the original Hyrule Warriors.

Age of Calamity sees a peaceful time of Hyrule – back to just before the Calamity began – where things begin to unravel as a portal through time takes a little Guardian back into the past to warn and protect Princess Zelda from impending doom. As a shift in the world begins to happen and monsters like the Bokoblins, Lizalfos, Wizzrobes, Chuchus, and more begin to raid the world, Link, Impa, Zelda, and more are tasked with taking back and protecting the kingdom from the evil that slowly begins its reign. Going from region to region on the same map from Breath of the Wild, players will go along with the champions Mipha, Urbosa, Revali, and Daruk and utilize all their skills to face against anything that heads their way in order to take back the land of Hyrule and stop history from repeating itself. 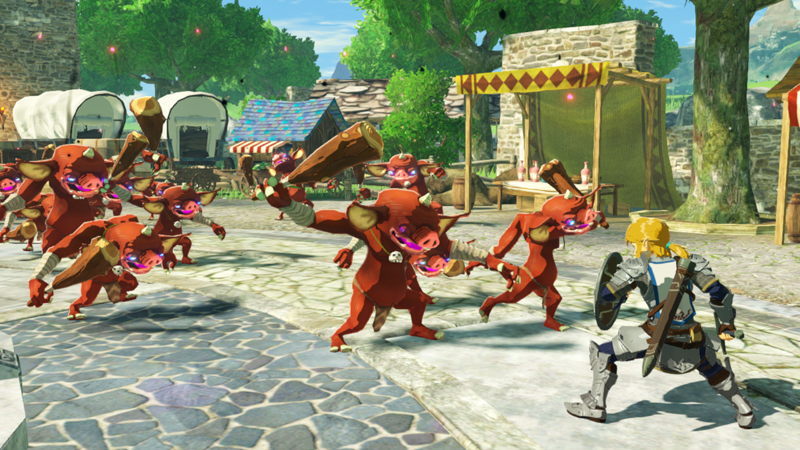 Being an Omega Force title, much like the original Hyrule Warriors, Age of Calamity is a more action-oriented approach to Zelda that strays away from the usual puzzles and dungeons in favor of slaying enemies as quickly and as flashy as possible while taking back outposts and camps riddled with enemies and have the occasional boss tied to them. Gameplay consists of the usual light attack and heavy attacks that can be alternated to create immense combos in addition to special attacks that can take out large amounts of foes at once. The basic inputs for each attack is shared amongst just about every playable character, though the feeling and sets of moves is what sets each apart from each other, making each have a unique identity out on the battlefield and be accessible for all sorts of players, including those that like to button mash. Some will feel a lot faster, while others are more focused, others with an area of effect, and others that bulldoze. Some are more aerial based while others are more sequential, requiring more methodical inputs for maximum output of damage and flare. Regardless of how or who you play, Age of Calamity, much like any other Musou line of games, has a little something (and someone) for everyone.

The map given through the Sheikah Slate serves a sort of hub and level select for how you’ll be progressing through Hyrule Warriors, and much like in Breath of the Wild, you can go in any order you’d like between main quests and side-quests as well as a multitude of other areas like stables, merchants, guilds, and the sort. Each mission you go on will give resources just like those found in Breath of the Wild. With those resources, you can access various locations spread throughout Hyrule to use to trade, sell, or submit towards a goal where you can increase your relationships with various factions for increased rewards to enhance a variety of things like more hearts, better weapons, armor, combos, and more for various characters. 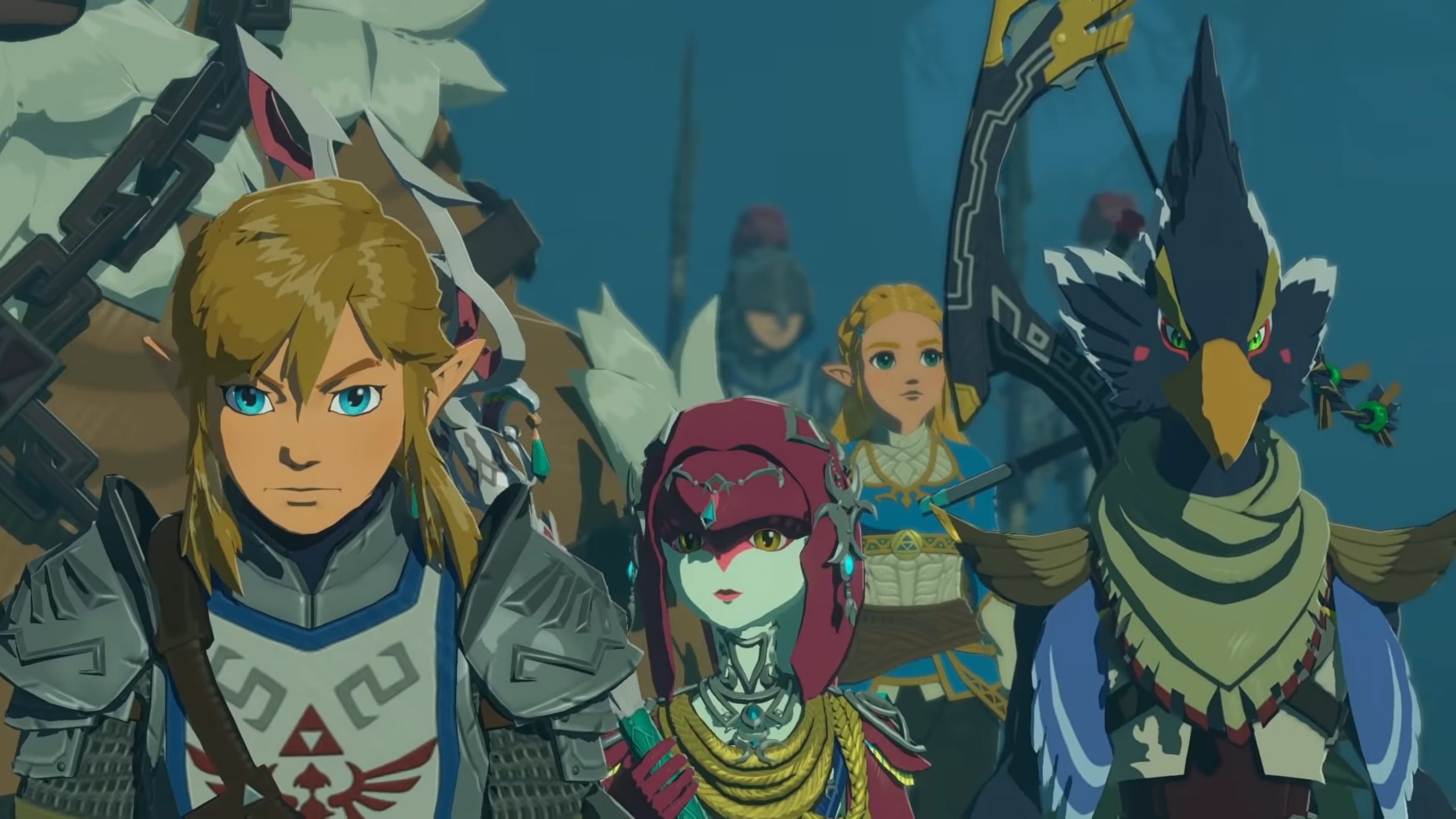 Side-quests can provide rewards of their own as you aim to achieve certain objectives in record time like killing certain foes with only bombs or barrels. These are short and sweet and a nice refresher when you don’t want to take on the longer missions that can, like most Warriors titles, ultimately feel repetitive as you’re just taking back camps from level to level. For completionists, however, regardless of what difficulty level you’re on you’re bound to have a great time collecting and unlocking most things in an organized way throughout your 15-25 hour playthrough depending on how much you’re willing to complete or focusing on, though it’s definitely a good thing to unlock the other areas where you can just buy and sell resources that you won’t need and make use of those so you don’t find yourself overwhelmed by the amount of similar weapons you have.

As you can imagine, with a high density of enemies on screen at once with a bunch of flashy animations, things can became fairly demanding. But with Omega Force’s prowess in the genre and aiming for 60 frames per second optimization since the era of PS2, it should seem like a simple task for the new Switch outing to run without fault. However, much like Hyrule Warriors on Wii U before it, it struggles to properly hit that mark, instead favoring a 30 FPS target – but even that target hits the mark a lot of the time with a further decreased resolution in handheld mode. It does make you wonder why there aren’t any options similar to those of Fire Emblem Warriors and recent Dynasty Warriors titles where you could choose between an action and cinematic mode, which basically served as performance and resolution modes. Given what we’ve seen the Switch to be capable of, it’s interesting to see that a more condensed version of Breath of the Wild somehow chugs and has issues far worse than an open world. 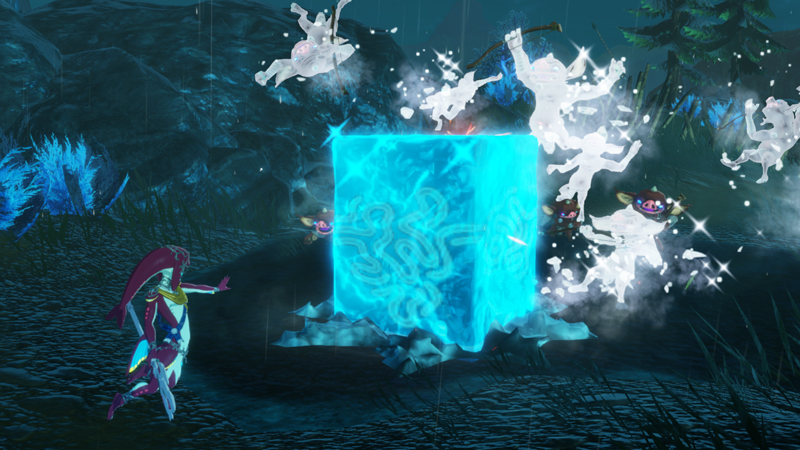 With all of its changes and quality of life enhancements and upgrades, Hyrule Warriors: Age of Calamity overall is a worthy spinoff that sees Omega Force’s hack-and-slash prowess shine once again on the Switch, giving Breath of the Wild further depth concerning its narrative as a prequel story. Overall, I do believe it’s the better successor to Hyrule Warriors that released years ago, but Age of Calamity leaves a bit to be desired in terms of performance and content. Seeing Breath of the Wild’s stunning art direction used to help propel a more action-oriented entry is fantastic, but certain things that gave Breath of the Wild’s magical charm are missing here and loses its mark visually, atmospherically, and tonally. The cinematics are great and combat is mostly fluid with a variety of playable characters that certainly makes you wish we’d see more spinoffs that would tackle stories focusing on characters other than Link, but once again Hyrule Warriors continues on the ever so familiar Musou formula from battle to battle that I think will have some players retiring the game about half way in unless they’re truly in love with Breath of the Wild.

Hyrule Warriors: Age of Calamity is a big improvement over its predecessor in almost every way, and though I appreciated a lot of the originality of the first game, adding more depth to the story of Zelda: Breath of the Wild is still massively appreciated as the game’s world and story has stuck with everyone since its release. In true Musou fashion, any Warriors title is going to mostly function the same with its biggest changes being on its art direction or license from game to game, but the Warriors franchise has very much been a firm believer of “don’t fix what’s not broken” as the formula works well and lends itself nicely to a bunch of different settings. Age of Calamity very much does well to still feel like a Zelda game instead of a typical reskin, and being able to really appreciate other character’s skillsets is really what sets this – and much like the original Hyrule Warriors before it – apart from other Zelda games and much of its spinoffs. Age of Calamity holds its own as not only a fantastic Musou title, but a worthy entry to the ever expanding and art-defying series, and continues Zelda’s legacy of quality, fun, and remaining so memorable which is why it still remains one of the most successful and well-known properties in and out of gaming to this day.