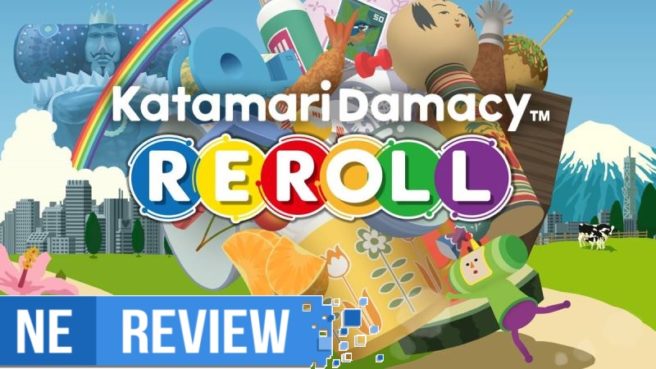 Since 2004, Katamari Demacy has always held a special place in the gaming spectrum with its quirky design but colorful and lovable world that has players simply rolling up items to make the biggest possible star that they can. What started off as a school project would end up becoming a series that would span well over a decade of titles across a multitude of platforms and become one of the most beloved niche classics known today. It’s been a long time since Katamari Demacy had a proper installment, but Katamari Demacy Reroll sees the Switch go back to the series’ beginning.

With Reroll, we get to experience The Prince having to clean up after the mess of the King of Cosmos after his binge drinking causes him to accidentally wipe out all of the constellations. It’s a stupid but incredibly humorous story that makes for tons of laughs and smiles, with a side-story seen from a family’s point of view. However, while the nostalgia is there for players who have experienced Katamari since the beginning, the game is so faithful to the point that the controls are still as wonky as they used to be.

Katamari Demacy Reroll keeps virtually everything the same from its original release, but does add some small additions to keep things fresh and a little more modern, such as split-screen multiplayer and support for motion controls – two options that, for better or for worse, give players more options that probably won’t be used for a variety of reasons. The multiplayer mode is lacking in a lot of areas, though choosing from a variety of princes is actually nice since they have appealing designs. In TV mode, it mostly runs fine as two players compete to collect the most stuff – including the opponent if you get big enough – but in tabletop mode the competition comes to a screeching halt as the frames drop tremendously and Katamari becomes Katastrophic. Outside of multiplayer, however, everything runs well except for a hiccup in each loading screen where the dialogue text from the King of Cosmos is slightly delayed with stutters, but it’s trivial stuff so that’s simply nitpicking, though noticeable. 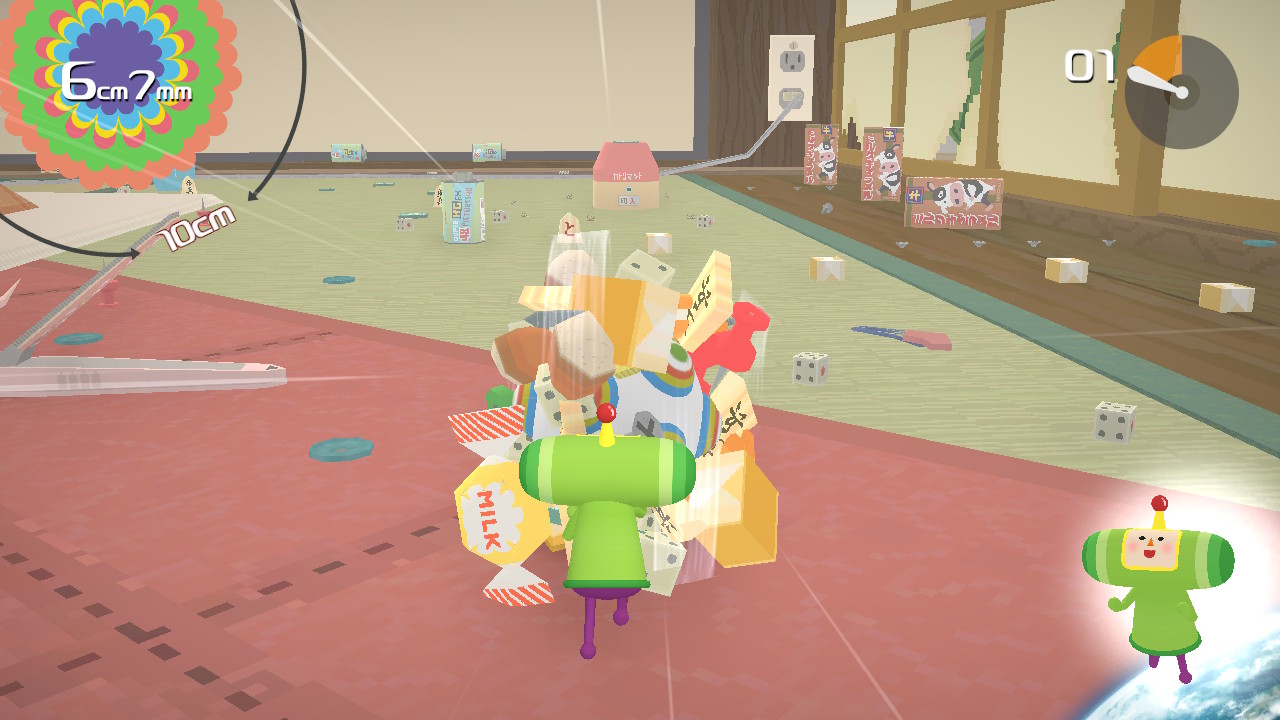 Despite Katamari’s accessibility and relaxing nature, the controls will undoubtedly take most people time to get used to. In theory, everything actually makes sense, but in execution things don’t always work out how you’d like. You’ll have to get used to moving sticks in certain directions that somehow manage to, at all times, be parallel but oppose one another at the same time. Finding your rhythm and playstyle is the best way to overcome movement in Katamari Damacy Reroll, but once you find a method that works, I don’t necessarily want to say the rest comes easy even if your experience becomes a lot more comfortable.

While the controls will default to how it is natively, known as “Usual Controls”, there are also “Simple” and “Motion” methods, though motion can only be used while in TV mode as a Joy-Con is needed in each hand. The “Simple” method allows for, as the game explains it, a more “modernized” experience, though I found my time with it to be even worse than the “Usual” setup, as a lot of the more technical stuff like sharp turning, charging, and jumping had these weird combination of inputs or were just removed entirely. Some folks may prefer that method, but the tutorial at the very beginning of the game gets you used to the “Usual” Katamari style of playing, so for me it was a lost cause after that. Motion controls I actually had a lot of fun with, but only because between the music and replaying older levels I had already completed and going back to them for fun. It was a goofy experience where I couldn’t stop laughing the entire time even though the movement was not very precise and I lost every level I tried with motion enabled – including the first level.

The music of Katamari deserves praise on its own, as it complements every level with these catchy and quirky (see a theme here?) tunes that span a variety of BPMs and styles that further contribute to the overall joy that the Katamari series inexorably exudes. There’s detail in all angles that have been carefully (and humorously) thought out, and one of my favorite features is actually the use of HD Rumble from the Joy-Con themselves. Each bounce, roll, collision, and more is felt with the right amount of feedback to make the impact just that much more convincing. With around 20 levels filled with replayability and differing goals in size, you’ll grow accustomed to feeling the HD Rumble be put to good use, and it’s really satisfying to watch your Katamari grow larger and larger – sometimes to the point where it’s unfathomable but equally absurd with all that’s going on. The best part is, even with hundreds and what feels like thousands of items available to be acquired, the game rarely dips in performance. This is equally as impressive now as it was back in 2004 on the PlayStation 2, even if by no means is Katamari Demacy pushing any boundaries in graphical specs. 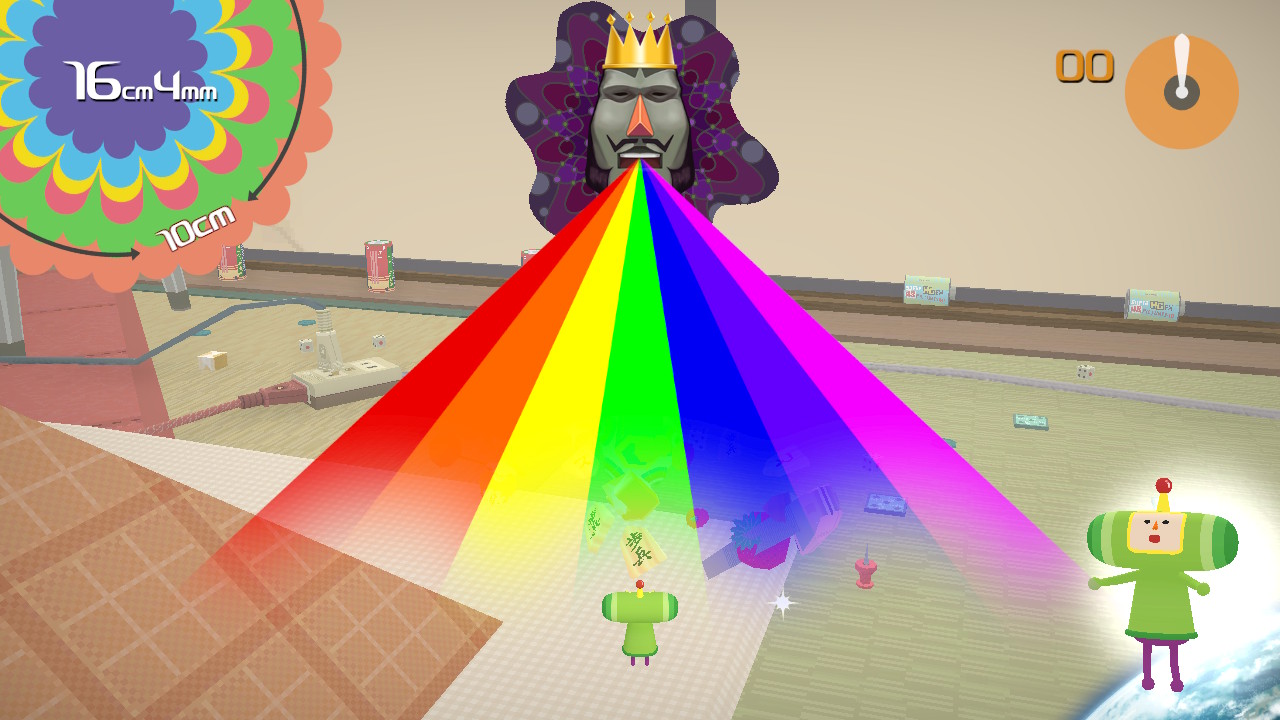 Katamari Demacy’s long history is attributed to one simple thing: Roll stuff up. It’s the simplicity of this rule that’s made it a fun and relaxing experience with no real obstacle except for the timer itself in each level to meet your size by. Having Reroll on the Switch feels like revisiting a piece of gaming history that allows itself to become accessible to a plethora of new players on a modern platform also meant to exemplify fun and joy much like Katamari itself, and while it’s worth reiterating that the controls are the biggest obstacle the game has to offer, it’s a worthwhile experience that is an audio and visual feast that, to me, is quite literally the gaming equivalent of dessert and pastries. Katamari Demacy Reroll is short but sweet, bright and funny, and most importantly joyful and memorable. There’s no game like it, and nearly a decade and a half later there is still virtually nothing to come close to replicating what’s made Katamari Demacy so special all these years. I have no doubt a fair amount of people will find it repetitive as every entry has essentially been just more levels to collect stuff in, but much like dessert, it’s a precious commodity that’s best enjoyed in moderate doses or else you’ll just end up feeling sick and regret consuming as much as you did. Katamari Demacy can easily be binged, but it’s much better to go at your own pace, and quite literally and metaphorically growing from level to level as you restore the stars to the night sky.

Katamari Demacy Reroll brings back one of the quirkiest games ever made with a fresh HD makeover that still as goofy, classic, and lovable as it’s always been. Between its relaxing gameplay, catchy soundtrack, and humor, the game is a colorful delight that feels like you’re having nothing but dessert the entirety of your playthrough. While the controls themselves haven’t aged particularly well, there’s at least another option that makes them a little more modern. Regardless of style it will take some time to get comfortable, though once you’ve gotten acquainted with the absurdity of the controls – an overall theme of Katamari – the rest comes easy. Katamari was never meant to be particularly challenging or aggravating, but some players may find the obstacles to be a bit overwhelming as you’ll constantly be crashing into stuff expecting to pick it up, only to lose a bunch of items instead from the impact. The biggest grab Katamari has always had is that, thanks to its experimental nature, it never takes itself too seriously, and neither should players. With tons of stages that have replayability and hundreds more items to collect, it’s a ridiculous amount of fun to see the Katamari become as big as possible as you attach to houses, cats, cars, people, and just about everything you can think of. Complemented by its soundtrack, much like Katamari Demacy itself, gameplay and the experience of playing Reroll is colorful, bright, and very much an abstract but joyful place to be in.

Katamari Damacy Reroll review copy provided by Bandai Namco for the purposes of this review.