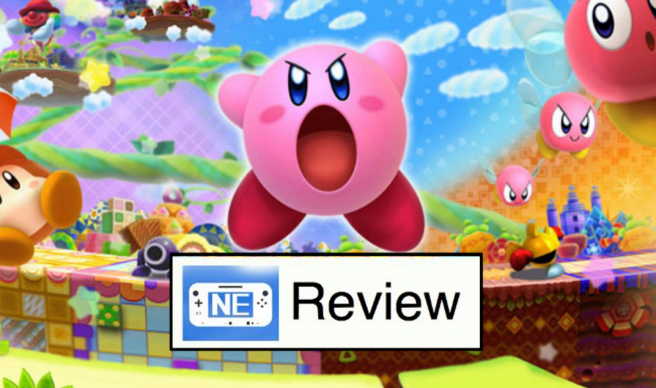 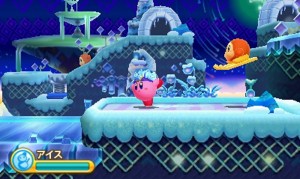 The first thing that grabs your attention in the Story Mode was graphics. Kirby games always have a bright, cute, and cartoony visual aesthetic, which enhances the experience of the otherwise simple gameplay by providing players with something visually appealing and constantly stimulating to hold their interest. These types of visuals pair nicely with the upbeat music and simplistic gameplay to provide a fun and carefree environment, and Triple Deluxe certainly continues in this direction. From the candy-coated landscape of Lollipop Land, to the lush jungles of Wild World, it’s a brilliantly colorful game, and at 60 FPS, everything is a delight on the eyes. Environments are lush and animated, and thanks to the 3DS’ three-dimensional effects, also contain a lot of depth. This depth not only plays a big part in the game’s visuals, but also is integral to a new gameplay mechanic. Levels now contain foreground and background platforming paths. Kirby can travel between planes using Warp Stars, adding even more to explore in each level.

There are lots of new puzzles in Triple Deluxe that utilize another feature of the 3DS: the gyroscope, by requiring players to move around objects in the game’s environment by tilting the 3DS. Triple Deluxe has the perfect amount of puzzles to balance out the action and keep players interested in each level, which ultimately helps the pacing of the game. Without them, the game would be simply run-and-gun (or perhaps, run-and-inhale?) platforming, which, despite being fun, is undeniably simplistic and one-dimensional, and might inevitably become tedious. Fortunately, each level has a nice mix of exploration, combat, and puzzles for a well-rounded gameplay experience. 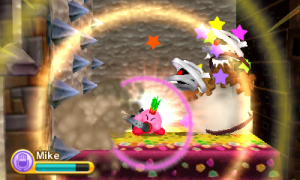 Lots of Kirby’s old copy abilities return in Triple Deluxe, along with several new ones, like Archer, Beetle, Bell, and Circus, giving players a lot of options to choose from for arming themselves for combat. I found myself being drawn more toward the new abilities, as they felt much more cleverly designed and fun to use. However, that’s not to say that old abilities have become stale– many copy abilities have had new twists added to them. For example, Kirby’s Sword ability– based on Link from the Legend of Zelda– now adds Link’s signature spin attack to the mix. Boss battles are also much more involved and challenging than before, with each boss having multiple forms and more intricate and devilish attacks — the first boss alone has two forms and 10 different attacks!

Triple Deluxe also gives players plenty of collectibles to obtain, through Sun Stones and Keychains scattered throughout every level. Sun Stones play a role similar to Green Stars in Super Mario 3D land; a certain amount are needed to progress through the game, but there are many to be found. Keychains are sprites of friends and foes from past Kirby games rendered as little keychainsh, taking you on a trip down memory lane as you try to collect them all. Being that I strive to find all collectibles in games and reach that 100% mark, Sun Stones and Keychains definitely improved the progression of the Story Mode for me. I felt compelled to collect every Sun Stone in each level before I would let myself continue, but if you aren’t so compelled you may not find them of much value. That being said, by finding every Sun Stone in a world, an extra level for that world is unlocked, which also contains more Sun Stones to collect, giving you a few bonuses for collecting Sun Stones as you work to collect them all. 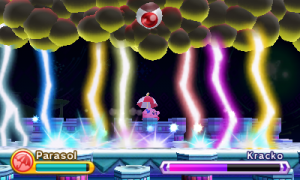 Triple Deluxe has a fair amount of extra content, as well. As mentioned before, two other games come alongside the Story Mode when you start up Triple Deluxe: Kirby Fighters, and Dedede’s Drum Dash. Kirby Fighters is surprisingly very similar to Super Smash Bros., in that it is a fighting game played on platforming levels. However, as it is titled, it’s all-Kirby. In single-player, you choose a Copy Ability and fight wave after wave of Kirbys with other Copy Abilities. Each wave takes place on a different map based on a location from a past Kirby game, such as Lololo & Lalala’s boss fight level from Kirby’s Dream Land. Lololo & Lalala even appear on this map as environmental hazards! Being a huge Super Smash Bros. and Kirby fan, I found Kirby Fighters to be very fun and addicting. Dedede’s Drum Dash is a music rhythm game of sorts, where the player controls King Dedede as he moves through a world of drums. Each level plays a tune, and the player presses the A button to the rhythm to bounce Dedede into the air and collect coins to increase their score. It seems simple at first, but actually gets pretty difficult! I love music rhythm games, so this game mode was a surprise bonus, and I felt compelled to play it over and over until I mastered it.

Kirby Fighters and Dedede’s Drum Dash aren’t all Triple Deluxe has to offer. There’s also three more game modes players can unlock: Dedede Tour!, Arena, and True Arena. Dedede Tour! is unlocked by beating Story Mode, and is a more difficult version of Story Mode where players control King Dedede, who plays like Kirby’s Hammer copy ability. By serving as Triple Deluxe’s Extra Mode/New Game+, Dedede Tour! adds replayability and more challenge to the game. Arena and True Arena have appeared in previous Kirby titles, but have not changed much. It almost feels extraneous to have these modes appear yet again, and I honestly would have preferred they be replaced with new game modes I hadn’t seen before several times since Super Star on the SNES. 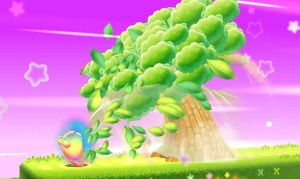 Throughout the entire game, Triple Deluxe’s soundtrack shines. Every track is perfectly placed to set the tone for each level, menu, boss, and more. There’s plenty of new music to be heard, but the best part is hands down all of the reworked versions of classic Kirby tunes. These songs have proved tried and true across many Kirby titles, but the arrangements in Triple Deluxe are just so fresh and fun. The soundtrack definitely adds a lot of value to the overall feel of the game.

There’s a lot to love in Kirby: Triple Deluxe. While it’s not a title with a twist like Epic Yarn, Canvas Curse, or Mass Attack, so much has been added to Triple Deluxe to make it more dynamic and engaging than previous core Kirby titles, still with the classic platforming gameplay. Overall, with plenty of collectibles to find, gameplay modes to unlock and play through, and challenges to complete, Triple Deluxe is a very fun and well-rounded game.

A “thumbs up” rating means that, at the end of the day, the game in question succeeded at what it was trying to do with possible minor flaws.
The Recommendation?