Posted on October 28, 2020 by Campbell(@CampbellSGill) in Reviews, Switch 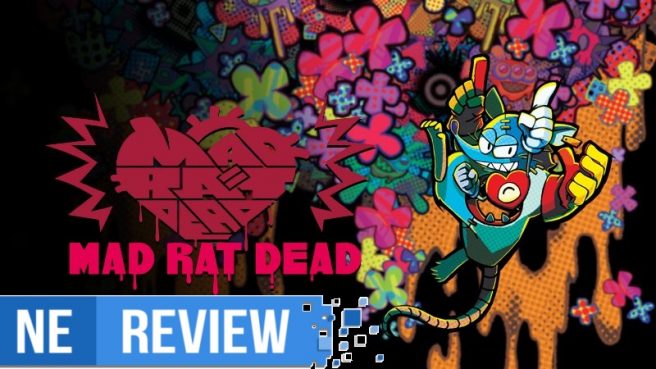 Mad Rat Dead marches to the beat of its own drum. Blending rhythm mechanics with platforming elements, this music-themed action game from Nippon Ichi Software introduces a new take on its genre with fast-paced gameplay and punk flair. Although it may look like a simple cartoonish romp on the surface, playing through its first few levels reveals Mad Rat Dead to be a surprisingly heartfelt experience bolstered by addictive rhythmic gameplay and a strong narrative direction.

After a stylish title screen accompanied by an upbeat jazz soundtrack, Mad Rat Dead opens on a surreal note. Following a fatal surgery, a deceased lab rat is given new life by a mysterious Rat God who grants him the ability to pursue one wish: to get revenge on the doctor who killed him. Driven on by a sentient heart that beats to the rhythm of the music (it’s a long story), what follows is a quest for vengeance that gradually morphs into a journey of self-discovery.

From this point onward, Mad Rat Dead’s narrative ventures into some unexpected directions. Along the way, Mad Rat encounters characters and events that shake his determination to end the doctor’s life. His beating Heart has its own personality, and the two of them establish a rapport that develops into a fascinating dynamic over the course of the game. It even delves into surprisingly dark subjects, making the story an unpredictable ride fraught with emotional twists and turns. Covering subjects like grief, empathy, and forgiveness, what looks like a simple comic action game gradually grows into a touching narrative. 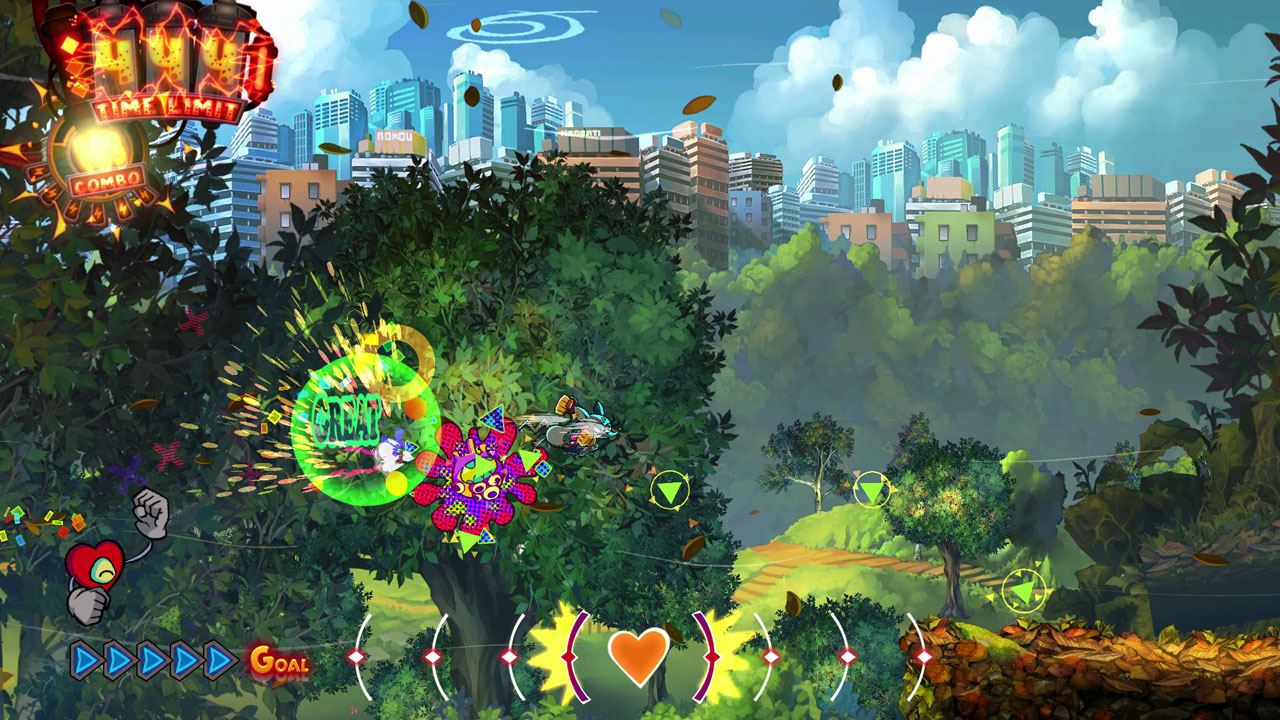 Mad Rat Dead keeps up the surprises when it comes to its gameplay. It’s not a traditional rhythm game; rather, it’s best described as an action platformer with strong musical elements. You can jump, dash, pound, and dance for extra momentum to navigate your way through six worlds of rhythmic platforming challenges. Although you can move freely while ignoring the music, every action must be performed at least loosely in time with the beat to execute completely. This is an unorthodox approach for a musically-focused title: unlike the countless auto-runners on the market where you endlessly move forward with the rhythm, Mad Rat Dead is a more manual take on the genre that gives you full control over your character. It creates a fast-paced gameplay loop where the beat of the music constantly pushes you forward, never letting you slow down.

This gameplay style can feel disorienting at first, especially for those who are accustomed to more traditional rhythm titles. However, after the first few levels, it clicks. It rewards paying attention to the beat, and it’s deeply satisfying to string combos together as you hit beat after beat after beat, timing your actions to the pulse of the soundtrack to maintain forward momentum. After any initial discomfort, the challenge likely won’t feel too overwhelming. It strikes a nice balance for the most part, as the game gradually dials up the difficulty while rarely feeling outright unfair.

The music isn’t the only thing you’ll have to keep track of as you’re exploring the world of Mad Rat Dead. Each stage has a strict time limit – or more accurately, a limit of how many beats can be played before you get a game over. Typically, this isn’t too much of a challenge, and rather, it lends a nice level of urgency to the moment-to-moment gameplay. Most levels aren’t so long that the time limit poses a genuine issue; I finished the vast majority of areas with hundreds of beats left on my clock. It only becomes more difficult during the last few stages, which is to be expected. 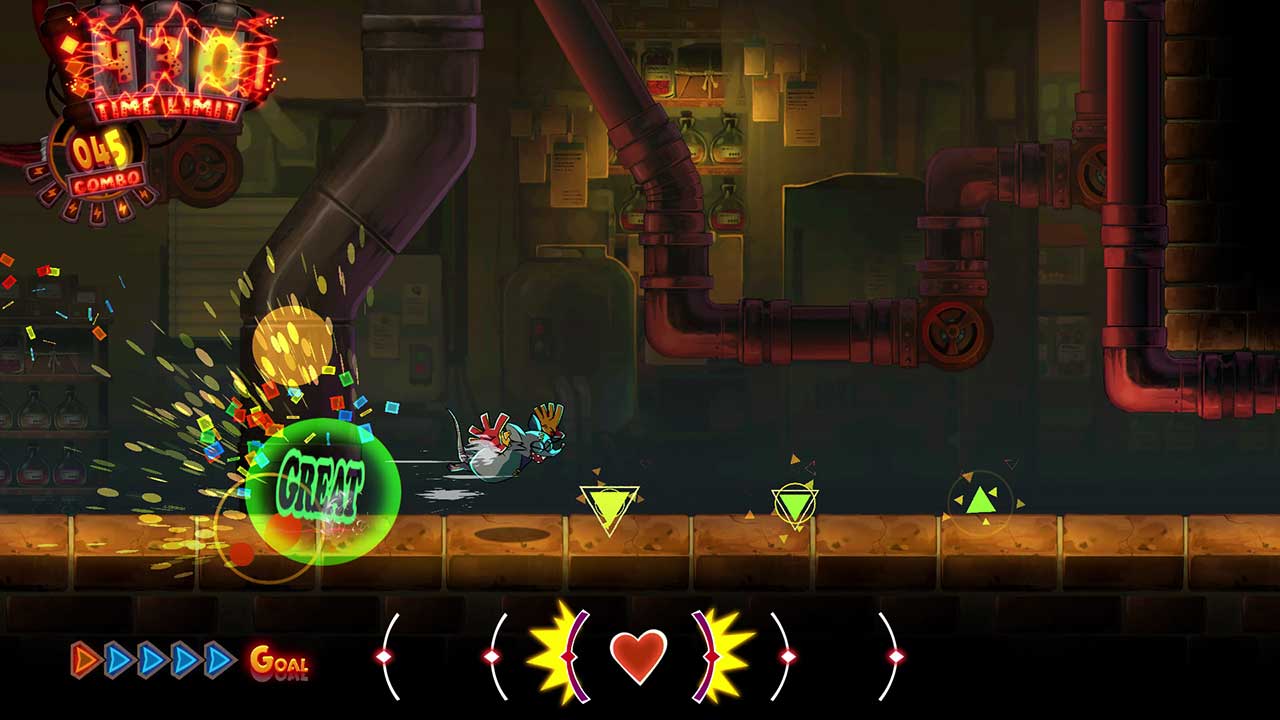 As much as Mad Rat Dead settles into a nice routine, there’s no denying that certain sections can feel supremely challenging if you’re attempting to pull them off perfectly: some areas require pixel-perfect (or perhaps beat-perfect) precision to overcome. Thankfully, the game eases on the challenge by allowing you to rewind time up to ten beats in the past every time you either get hit by an obstacle or fall to your death. This gives you an opportunity to reevaluate your situation and give each challenge another shot – at the cost of precious beats, however. This system offers an opportunity to lighten the blow of the game’s tougher challenges without making things too generous.

As exhilarating and satisfying as the gameplay loop can be, it’s by no means perfect. Mad Rat Dead has an unfortunate habit of randomly throwing obstacles at you. You could be cruising along and grooving to the music before it suddenly drops a giant fireball on you with no warning and forcing you to rewind. These obstacles don’t give you time to react unless you’ve already played and memorized the level – it’s a frustrating obstruction that breaks up the flow of an otherwise well-paced game.

On a similar note, the game also has a habit of changing up the tempo of its soundtracks, again without warning. While this adds a touch of musical variety, it has a directly disorienting impact on the gameplay. Since you have to move entirely to the beat, sudden tempo shifts require you to dramatically change the way you play. And since you won’t be able to know when a breakdown is coming ahead of time, you’ll almost certainly miss a few beats and be unable to perform necessary actions, potentially costing you precious beats and yielding major setbacks. Thankfully, these tempo adjustments are infrequent throughout most of the game, but they pop up more commonly towards the final levels. While this was likely an attempt to dial up the difficulty for the final stretch of the adventure, it feels cheap at best and downright unfair at worst. 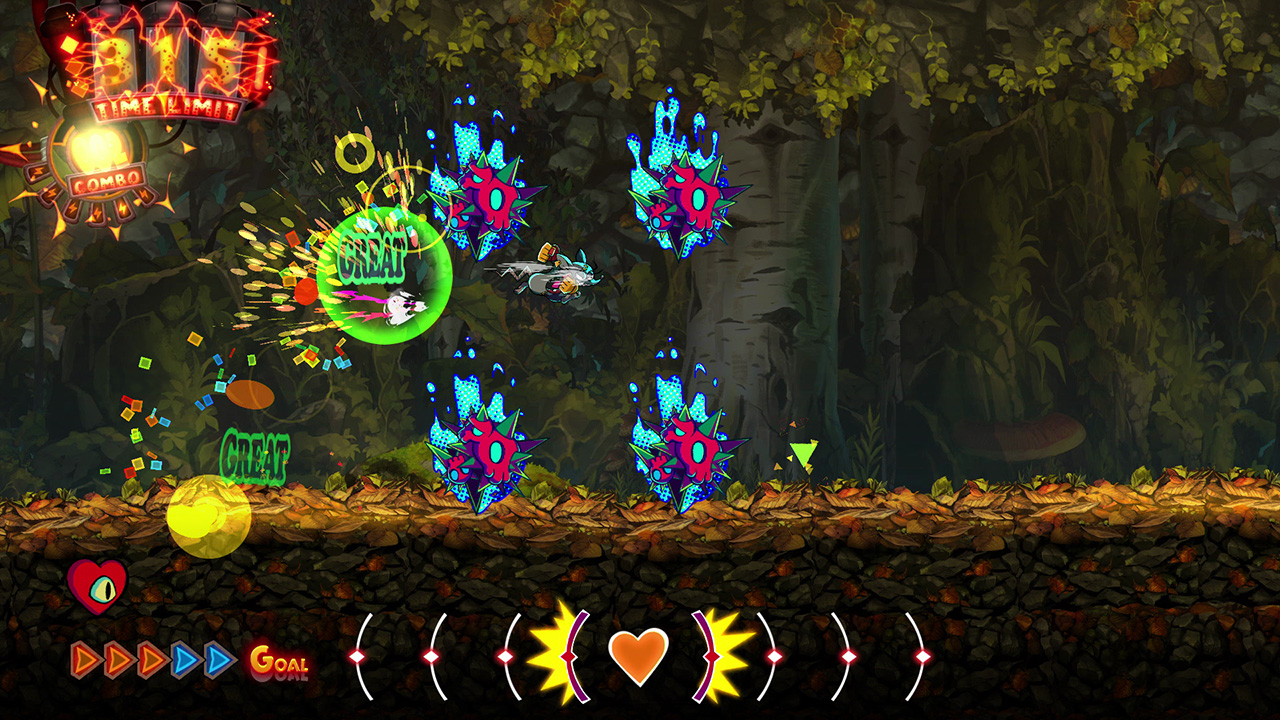 These occasional issues ultimately can’t detract from what the game does achieve the vast majority of the time. It’s a heart-pounding rhythm game in the best way. Once you understand its mechanics, it locks you into an intoxicating loop that’s satisfying and addictive throughout its entire 8-hour runtime. It’s easy to hop back into it for many more hours as it’s easily enticing to try and finish levels with higher combos or faster completion times.

Of course, a rhythm game is only as good as its music, and Mad Rat Dead continues to deliver in this regard. Its soundtrack spans upbeat jazz, EDM, rock, and even some piano ballads. Despite featuring multiple composers who each bring their own distinct style, Mad Rat Dead’s music manages to be remarkably consistent from start to finish. Each song boasts of a strong beat paired with lush instrumentation, including exotic flutes and string instruments along with bright keyboards, guitars, and even big band orchestration. Perhaps not every melody is unforgettable, but each song makes notable contributions to the gameplay loop and makes each level memorable and exciting.

That’s not to mention that the game looks beautiful too. Its graphics boast the hand-drawn, comic-book-esque art that has come to define most of NIS’s 2D titles. The graphics pop on the portable screen, while they look similarly lush on bigger displays. The game keeps pace with itself even in the most hectic sections, maintaining a smooth frame rate so you can get lost in the beat.

Mad Rat Dead is one of the year’s most pleasant surprises. Seemingly coming out of nowhere, its blend of deeply satisfying rhythm gameplay with a story that isn’t afraid to get dark make it well worth your time. Of course, its catchy soundtrack and beautiful visuals only sweeten the deal aesthetically. It may not always be completely fair and its moment-to-moment gameplay might take some getting used to, but after getting into the flow, it offers a healthy and deeply rewarding challenge. Fittingly enough for its name, Mad Rat Dead is maddeningly good.