Posted on March 19, 2022 by Nicholas Serpa in Reviews, Switch 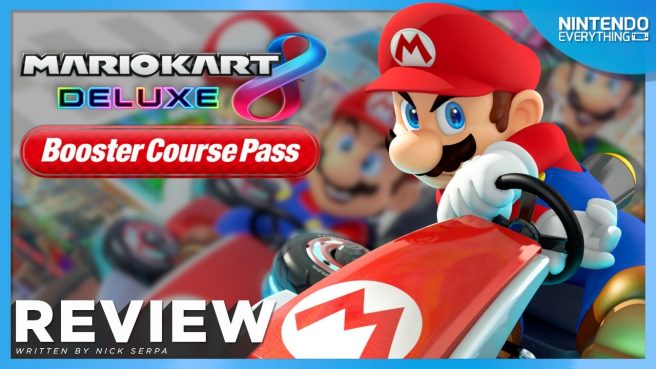 Mario Kart 8 Deluxe has sold roughly a bajillion copies since it launched on Switch back in 2017 (and that’s on top of the sales of the original Wii U version), so I had been hoping for years that the game would receive some new content at some point in its life, but it was never a guarantee. Finally, though, that moment is here: this week marks the arrival of eight new courses in Mario Kart 8 Deluxe, as part of a new DLC pack that Nintendo promises will eventually result in 48 (!) new courses being added to the game by the end of 2023. So how do the new tracks fare so far – and will these new courses be enough to get the community excited about Mario Kart again? 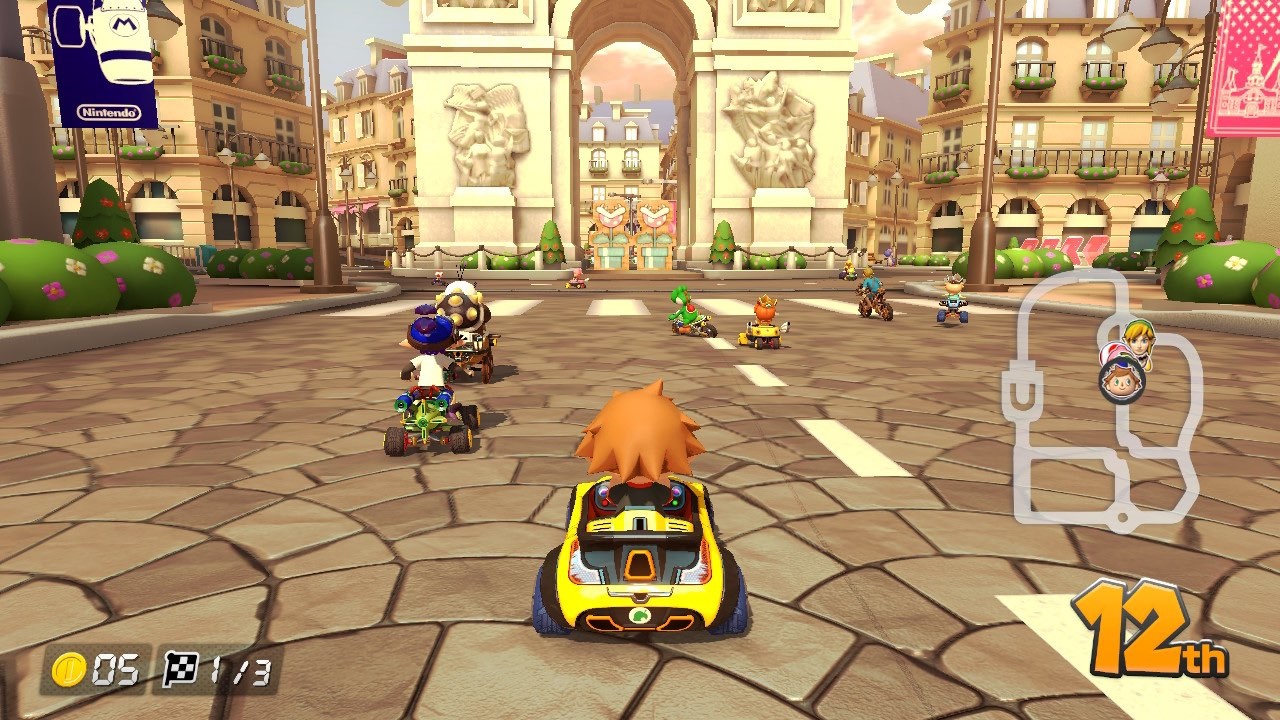 Overall, I’ve been thoroughly enjoying the course selection as a whole. Paris Promenade is an absolute joy to experience on Switch – the way the lighting on this track shines through the Eiffel Tower is flat-out gorgeous, and there’s a good amount of detail to the architecture of the buildings. It was the first course I played, and it sets a high bar for the rest of the tracks – seeing what was originally a track designed to be played on smartphones (in a vertical orientation, nonetheless) made crisper and more vibrant on the Switch is an absolute treat. And the music is outstanding – a bouncy yet calming mix of heartfelt accordion and light, airy chimes that captures the ambience of Paris perfectly.

Ninja Hideaway is another standout course, and also one brought over from Mario Kart Tour. It’s actually a very complex and vertical course that takes place mostly on the rooftops of a Japanese dojo, and it’s filled with tight turns and plenty of places to fall to your doom. It feels like one that will actually take me some time to master, which is genuinely exciting – I haven’t felt that way about a Mario Kart course in a long time.

Granted, those are also both fairly new courses – Mario Kart Tour released just a few years ago, after all – which is maybe part of the reason why they feel like such a great fit for Mario Kart 8 Deluxe. I didn’t really feel the same way about the Tokyo Blur course though; while the setting of Tokyo is fairly interesting, it’s a relatively straightforward circuit that keeps most of the city in the background, just out of reach – you don’t interact with very much on the course itself. It’s not bad by any stretch, just not as interesting as the other courses brought over from Tour. 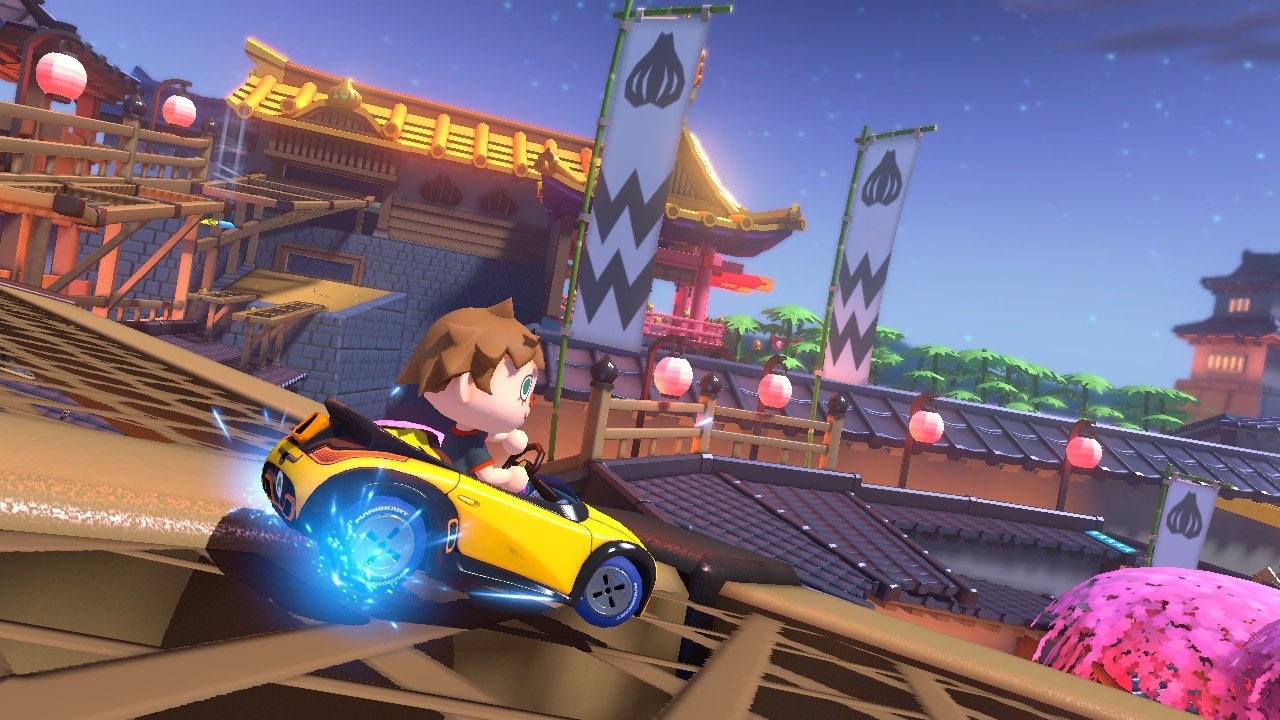 As far as older courses go, there are some genuine classics being brought into Mario Kart 8 Deluxe with this first wave of DLC, and they’ve never looked as good as they do now. Coconut Mall is a personal standout; I have fond memories of playing the original course on Wii, and it’s pretty much exactly how I remember it here, just with a fresh coat of paint. There are some subtle differences – the cars in the mall parking lot no longer move back and forth, for example – but by and large this is the same high-energy, frenetic sprint through a shopping center that Mario Kart fans know and love, complete with the iconic music attached. Shroom Ridge is also a fun one, with plenty of traffic to avoid (or use as impromptu ramps) – although this one does have a lot of thematic similarities to Toad’s Turnpike, which is another traffic-based course already in the base game.

There are a few courses that I don’t feel have aged particularly well, even with a fresh coat of paint. Sky Garden was originally a pretty one-dimensional course on the Game Boy Advance, and not much has been done to make it feel particularly dynamic here, short of a glider segment or two. It’s also very short, and just generally feels like an inferior version of the existing Cloudtop Cruise track in the base game – so to me, it just feels like a wasted slot. Toad Circuit from Mario Kart 7 is a solid track, but also feels like it’s been superseded in terms of quality and depth by the Mario Kart Stadium course introduced in MK8D, and again, very similar thematically. And while I know lots of fans have nostalgia for Choco Mountain from Mario Kart 64 – myself included – there’s nothing about the overall layout of the track that feels particularly notable in today’s racing landscape.

It’s worth noting that while some of these course have had some tweaks to their design to help them fit in a bit better with Mario Kart 8 Deluxe’s base courses – Coconut Mall, for example, has a glider segment added where there was originally just a jump to the ground – these tracks are devoid of the anti-gravity segments that were a huge part of the marketing build-up for MK8D. I noticed their absence, but I still wouldn’t say the courses feel like they are harmed by it, especially because many of these courses are awash with branching paths and shortcuts that add an extra layer of replayability and complexity to them. 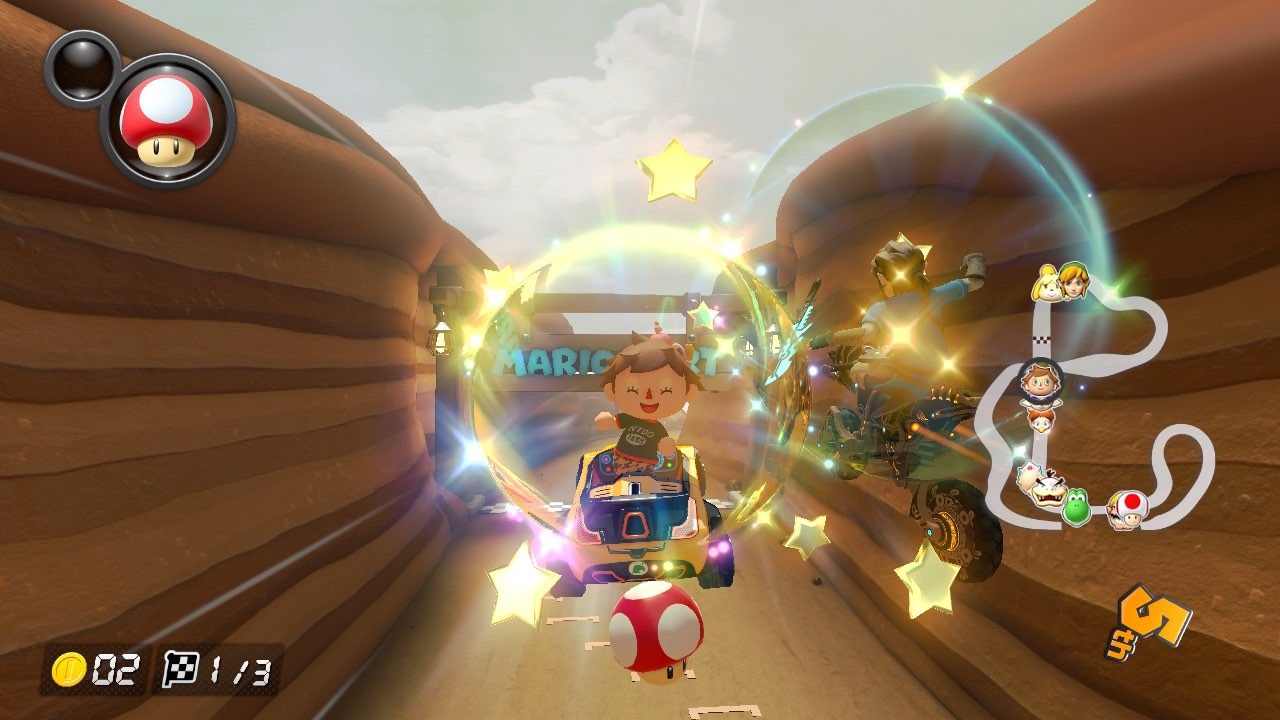 As far as visuals go, there was a lot of debate on the internet prior to the release of these courses about the general quality of the graphics of these courses. Some people were over-the-moon about how amazing theses old courses look now that they have been brought over to a modern game, but many others were disappointed with what they saw as a strong visual downgrade. After playing them all several times, here’s my take: yes, some of these courses do seem to have slightly simpler textures compared to the base game, and aren’t quite as detailed. Foliage and building textures in particular are much simpler and flatter, and you won’t notice as many environmental objects in general. That said: the new courses all still look great. Colors are vibrant and pop off the screen, the lighting is still dynamic, and at no point when I was actually racing through the courses at blistering speeds did I think to myself, “darn, this should look better.” If anything it just feels like a slightly different art style was selected – and I’m totally fine with the decision. Ultimately, Nintendo is doubling the amount of courses in Mario Kart 8 Deluxe for less than half the price of a new game – if a slightly more simple art style is the trade-off, than that’s one I’ll gladly make. And of course, the music is just as excellent as ever – the remixes of the classic songs are all bursting with energy and personality, and while I can’t always tell how much of it is orchestral and how much of it is digitally created, it’s all outstanding across the board.

If you’re on the fence about whether on not these courses are worth your hard-earned money, remember that there are still 40 more tracks being added to the game over the next year-and-a-half or so, so there’s no harm in waiting. Also, even if you’re not planning on purchasing the Booster Course Pack anytime soon, you can actually still play the new courses online if one of your friends owns the pack, or if they end up being randomly selected during online play – you just won’t be able to play them solo or select them on your own during online play unless you buy the Booster Pack or subscribe to the Switch Online Expansion Pack. So there’s at least a way to try before you buy!

At the end of the day, I think this first wave of new courses is a strong start to the Booster Course Pack, and if you (like me) have been eagerly waiting for Nintendo to release new content for Mario Kart 8 Deluxe, then there’s a good chance you’ve already had this DLC preordered for weeks. And for everyone else – this is a new pack of high-quality, fun-to-play and beautiful tracks, and I don’t think most people will be disappointed.