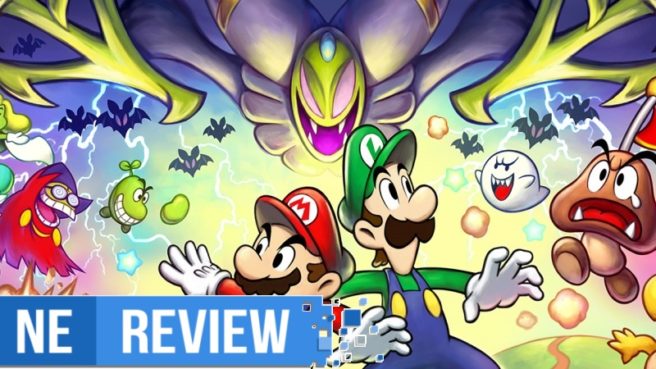 For many of us, Mario titles were the games we fell in love with growing up. Whether you were raised on the NES, N64, or even playing the more recent releases like Super Mario 3D World on Wii U, it’s likely you have some fond memories. For me, Mario & Luigi: Superstar Saga was that game. I remember the very concept of having a game this large in my pocket with me everywhere I went fascinated me all that time ago, and to hear that Nintendo is finally looking back on it with a glorious remodel filled my heart with joy. As someone who has already completed Superstar Saga several times over, I was a bit concerned about this new look being enough to buckle me in for a revisit. Yet thanks to some new additions, a trip down memory lane was definitely worth it.

Mario & Luigi: Superstar Saga begins with a frantic Toad rushing into the home of Nintendo’s famous plumbers to alert them of Princess Peach’s situation. As it turns out, evil forces under the names of Cackletta and Fawful have come and stolen her voice, leaving her mute aside from her literally destructive vocabulary. This upsets no one more than it does Bowser, and so he, alongside with our heroes, take chase after those who terrorized the castle. It’s the perfect setup for one of the wackiest stories in all of Mario’s backlog of titles. There’s always a constant flow of charm and humor that come bursting out of the seams of nearly every piece of dialogue. Some of the scenarios and scenes you’ll be presented with are so unpredictable and insane you’ll genuinely grow excited every time a new scene begins to play. Also, there’s plenty of Luigi roasting to go around, which is always a good laugh. I’ve given many Mario RPGs a shot since originally playing through this title and it’s very pleasing to see how well it all aged.

At its core, the battle system in Mario and Luigi: Superstar Saga + Bowser’s Minions is what you’ll find in a traditional RPG. You take turns switching between attacking and dodging enemies, but throughout the process you have control over both brothers. Similar to that of the early Paper Mario games, you deal extra/absorb less damage when you press the action button at just the right second. When it’s the player’s turn, you select from the commands what move you want to take (attack, item, special), and then watch each bro make their move. Obviously, the typical jump and hammer commands aren’t too difficult to land, but if you’re feeling particularly skillful you can choose to use a special move, where the you must nail a string of timed commands that reward more damage done the better you time it all out. There would be times where I would find myself lunging my whole body forward because I got too into it. As you progress the main adventure, they gradually provide you with more and more options to use in battle, so being able to constantly try new strategies and see how they play out was always tons of fun.

When the enemies take their turn in battle, they’ll fire some attacks or lunge at you, and once again you’ll control Mario and Luigi and must perfectly time your moves to not only completely avoid damage, but sometimes even give some damage back. This interactivity in battle by controlling each brother throughout the whole experience lends them to not grow taxing as your playtime increases, as you’re constantly engaged and first-hand affecting how each portion plays out. There’s rarely any lull time, and with all the numerous kinds of enemies that all possess their own unique patterns, you’ll have plenty of new kinds of battle experiences falling onto your lap. 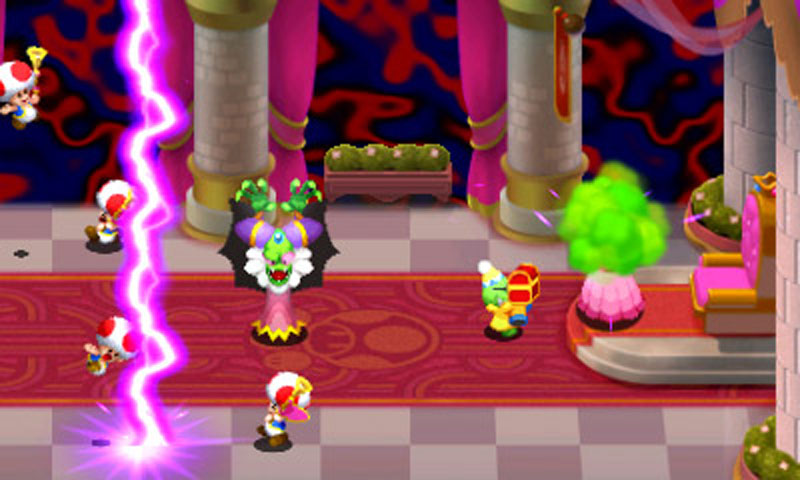 The leveling system is mostly self-explanatory. When either Mario or Luigi gain a certain amount of experience, their stats will raise a set amount, but you’re given a roulette wheel of 1-4 points that you can apply to a single stat. The stats that can be upgraded are Health, Battle Points (used to perform specials), Attack, Defense, Speed, and Stache, the latter of which helps improve your chances of getting good deals in shops or performing lucky hits. This mechanic is nice, because if you feel that maybe Luigi isn’t up to par with Mario on strength, you can test you luck and try to give him that extra boost to keep things far (even though he doesn’t deserve it).

The other portion of this game, that easily plays as huge a role as the combat, is the exploration of the overworld. You’ll control both the plumbers using the control stick/d-pad, but will have separate control over each of them using the A and B buttons respectively. Throughout your journey, each Mario Bro. will learn their own special commands that you will use to dig, fly, and spin your way into solving puzzles and traversing the terrain. As you progress further and further, their list of skills will grow, and this will encourage you to backtrack and try out your newly acquired skills to see what else is hiding in the world and to collect all the little collectibles you can get your hands on. The puzzles actually did cause me to think twice sometimes – but never once felt frustrating or like they were being thrown my way simply as filler. Something to note is that these skills also work in tandem with the battles, meaning that each thing you learn to aid your journey and can also be used to crush enemies, which is always a fun time. 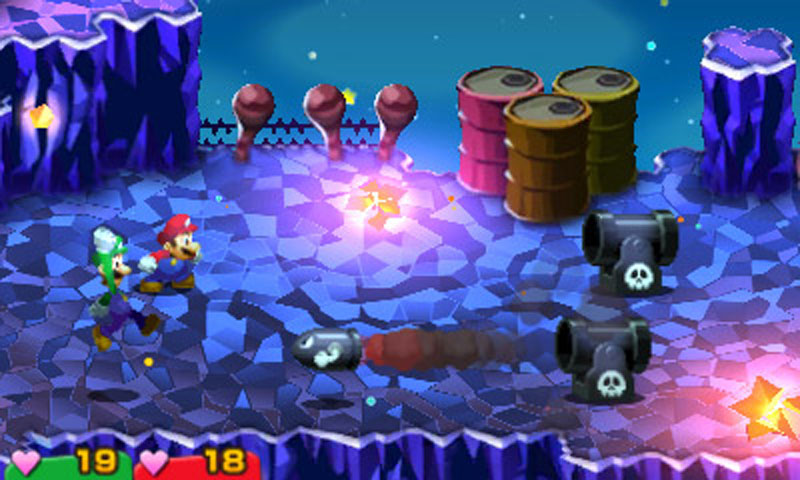 One of the biggest updates to Mario & Luigi: Superstar Saga in its jump to the 3DS is the very clear visual upgrade, and initially I didn’t think of it as more than a new coat of paint. However, that’s not the case at all. From the beginning it became clear that this was nearly a visual reimagining, as each asset has been completely redone and everything looks fantastic. The once already vibrant and popping color palette of the original GBA version is now more fleshed out than you would think, lending each area and town you visit the ability to stand-out more than ever before. The art style takes excellent advantage of the 3DS’ capabilities, and it was always so much fun seeing the expressiveness of every character shine more than ever. A problem I often found myself running into when playing the original title was with depth perception. The ledges and cliffs at times sometimes blended with the background, rendering it difficult to establish whether its something you can traverse by plainly walking or if you needed to perform a special move. This new art style, however, completely eradicates this issue by making the depth work much better than before.

Instead of taking place solely in the Mushroom Kingdom, this game takes place mostly in the BeanBean Kingdom, which is full of towns and villages whose names all comprise of different ways to express laughter, such as “HooHoo Mountain” and “ChuckleHuck Woods”. This is a completely new area introduced in Superstar Saga, meaning the developers were able to have complete creative freedom in how to build these new areas and create these new faces, and they did an excellent job. The people you’ll meet along your journey include a Hermit Crab with a lisp, a town full of people who are quite literally beans, a snow monster rocking some pigtails, and a whole plethora of completely unique designs and styles that you won’t find in any other Mario title. Each character is so drastically different from the last, and thanks to the upgraded visuals now express and emote more than ever before.

On top of the visual upgrades, there were also several gameplay changes, the biggest of which being the whole new “Bowser’s Minions” mode. You gain access to it about 3-4 hours into the main game, and it’s a whole other arc being introduced just for this 3DS remake. You control Captain Goomba, who upon hearing the troubles Bowser has put himself in, collects an army and gives chase to rescue their Lord. The combat works a little differently here, as it actually plays out by itself, and your only interaction during the battle is choosing when to perform criticals and hitting the action button at just the right time to deal that extra bit of damage. It follows a rock-paper-scissors style weapon triangle, and before entering battle you select from your collection of allies and pick who’l be the best fit for the battle at hand. It never goes too deep, but is definitely a welcome addition to the full game and helps add longevity to the overall experience. 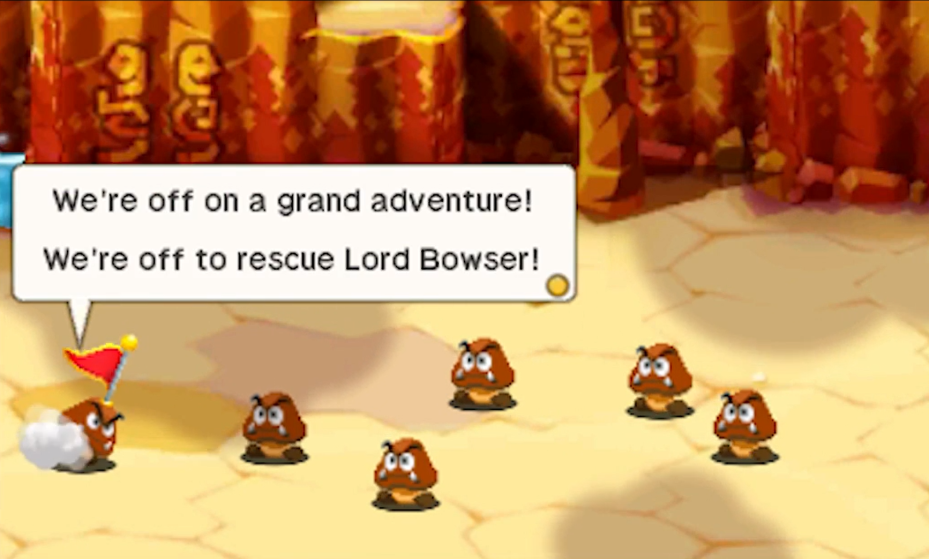 Another change is an upgraded soundtrack that never sounded better. Certain area’s themes have been completely reimagined and for the better. In battle there’s also now the option to use an Emergency Block if you aren’t able to nail the timing of that one attack, and a way to add visual indicators on where and how enemies will attack to make things easier for newcomers/less experienced gamers. The bottom screen of the 3DS goes a long way to helping the flow of battles and traversing the overworld feel more seamless as well.

Mario & Luigi: Superstar Saga + Bowser’s Minions is the remake I never knew I wanted, and in absolutely every aspect adds to the quality of the original game. As a fan of the GBA original, it’s such a great remake that I might find it legitimately difficult to go back to the original. It’s very clear that the developers of this title knew exactly what made the GBA classic so fantastic and knew exactly where to expand. Now if you’ll excuse me, I have some Goombas to crush and Luigi insults to read.

Mario and Luigi: Superstar Saga + Bowser’s Minions review copy provided by Nintendo for the purposes of this review.