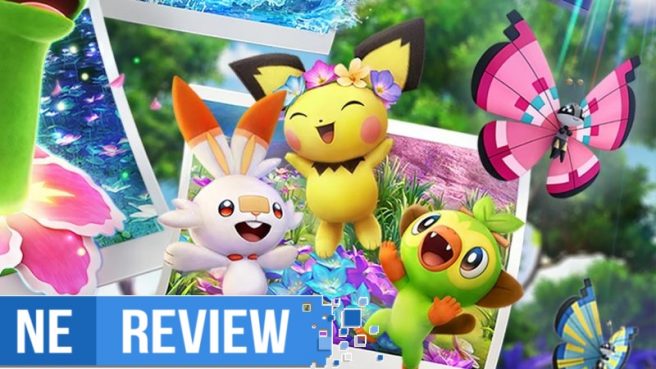 It’s been two decades after the original release of Pokemon Snap on Nintendo 64, and since then fans have been both nostalgic and petitioning for a worthy successor. Despite its failure, when the Wii U was Nintendo’s current console on the market, many were certain that a new entry would materialize as the GamePad seemed like the perfect controller for a truly next generation Pokemon Snap experience. New Pokemon Snap now finally sees the long awaited and almost mythical release of a sequel on Switch, and brings a slew of new features, replayability, and stunning graphics that lets us look at Pokemon in a way we’ve never seen them before. It lets players get up close and personal with their trusty cameras once again to take wondrous shots, all in the comfort of their own home or on the go instead of a Blockbuster.

The concept of New Pokemon Snap doesn’t veer to much from its debut on Nintendo 64. You’re still very much on automated rides where you’re on a research trek through various ecosystems of a region – in this case the Lental Region – to uncover all the Pokemon that inhabit each respective area and take exciting shots of all kinds from glamorous ones to revealing their more peculiar habits and how they interact with the environment or other creatures around them. If you’ve been a fan since day one 25 years ago or someone who’s recently gotten into the mindset of catching them all, the game constantly exudes a feeling a magic as you go from area to area to get some of the best shots you can with all sorts of Pokemon, including those you wouldn’t expect to be seen in such close proximity, making for a series of “oohs” and “ahhs” when you come up on the detail of some of the more monstrous pocket monsters. 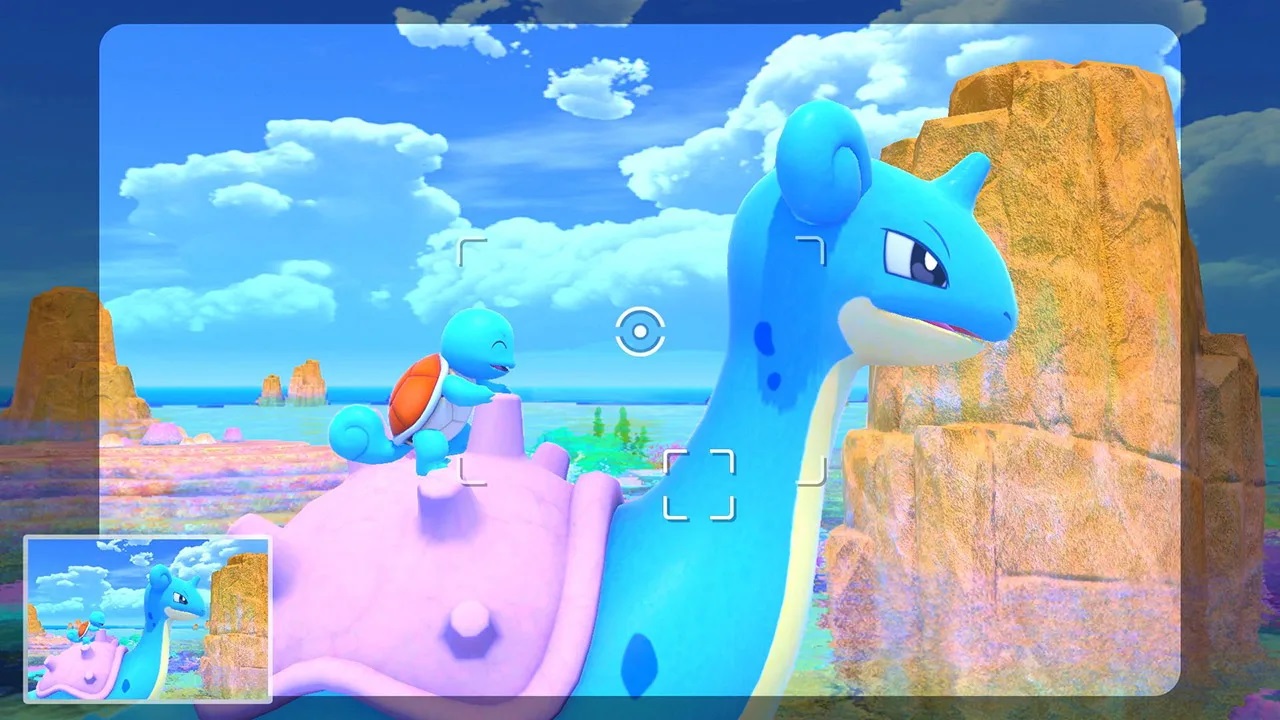 Whether you’re into photography or not, New Pokemon Snap is an easy pick-me-up that has you up and running quickly, and even with fully voiced and animated cutscenes as well as more text-based dialogue exchanges, it wastes no time getting you familiar with the mechanics and making sure you’re understanding the fundamentals of trying to secure the best composition possible for your shots out on the field. In a research camp and lab known as L.E.N.S. – Laboratory of Ecological and Natural Sciences – you’ll be introduced to Professor Mirror and other aspiring researchers who will greet you and get you acclimated to how to get the most out of your pictures with quick tutorials and practice shots while doing a few trials runs in more luscious and open areas to understand the differences between breathable and filled compositions.

New Pokemon Snap is photography at its most basic, but it’s also not trying to win a Pulitzer Prize or an award for National Geographic. When you’re initially out on the field, concerning yourself with the type of lens you’re using or shutter speed is the least of your worries, instead opting for more interactive elements to the photography that will help you get some of the coolest and most animated raw shots possible. With a set amount of film each expedition, you’re free to take shots of anything and everything as you look around in a 360 degree fashion, but it’ll be the Pokemon and unique objects that will net you the most experience from Professor Mirror as he critiques every photo you submit once your research ride is completed. The algorithm used to critique the shots are odd, however, because if you’re actually going in with the mindset of a photographer, it won’t actually mean much as the things that go into account are pose, placement, size, other Pokemon, and additional factors that will make up the score you end up with on each photo. 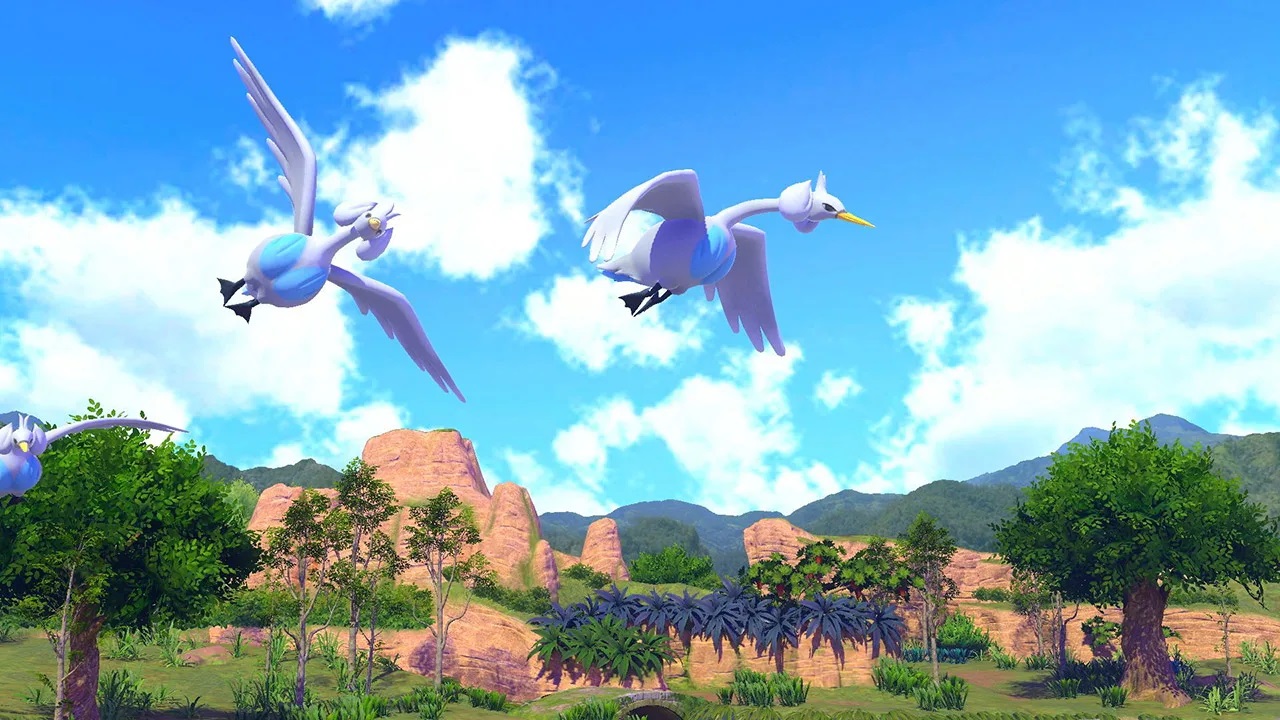 Once you’ve submitted all photos, these will effectively make up the experience you’ll get for the region you’ve visited and increase the levels, and with each increase in levels comes more to see, do, and experience, from change of day to added Pokemon, food to throw, triggers, and more to get the most out of each research trip and creatures you come across. With an increasing amount of abilities and interactions, you’ll get the chance to take more unique shots that will grant you higher rarities of shots taken, which will be rated from 1-4 stars and then further awarded with either bronze, silver, gold, or platinum versions of those stars depending on the composition of the photo.

Photos don’t just end the moment the shot is taken, but of course with the power of editing, you’ll use filters, stickers, and frames to play around with after you’ve submitted the initial shots for Professor Mirror to critique. You’re also welcome to make them as hilarious as possible for the world to enjoy too as you upload them with New Pokemon Snap’s online feature that takes you into a hub of viewing trending photos, photos of the day, as well as recommendations from friends and similarly ranked research photographers. Due to the technical limits of the 90s, outside of printing some of the shots available (which most people didn’t and weren’t able to do), it was always unfortunate to not be able to show off some or your better shots to friends and family in a convenient way other than inviting them over and showing them on the TV, so thanks to the power of the internet and the digital age we currently live in, it’s incredible to be able to see so many fantastic shots from players nationally and globally, as well as some of the communities favorite shots via the medal distribution players can give to other uploaded photos to show their appreciation of the picture.

That being said, even though the editing portion of the game is a bit of a letdown with a lack of tweaks and filters. You’re really just limited to the likes of contrast, exposure, black and white, VHS effects, and other unflattering effects. It’s still nice to be able to see players making the most of a small toolset to show off some pretty awesome compositions, though it doesn’t necessarily give the chance for people to necessarily show artistry behind their shots, so instead you’re left with what ultimately feels like a glorified Miiverse more than anything else. 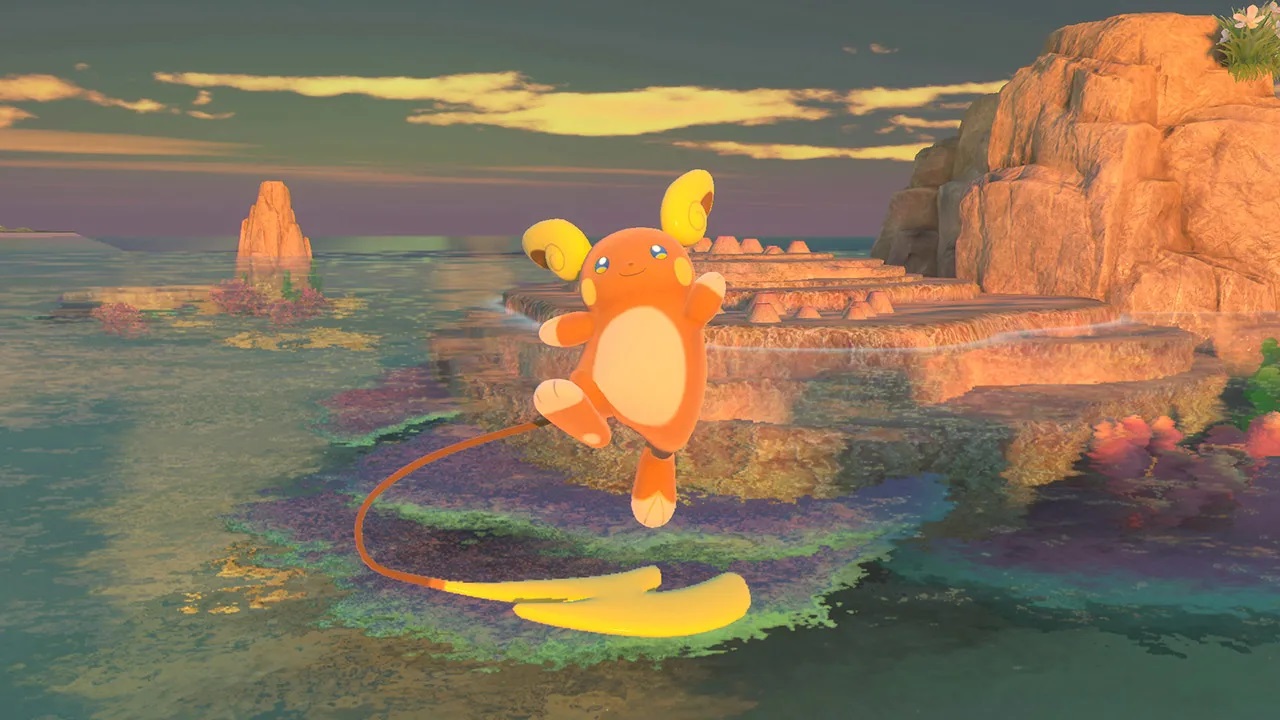 New Pokemon Snap is almost deceptive in that it seems hollow at a glance, as the menus initially come across as being incredibly simple and modes are left to a bare minimum. But as you play and unlock more the inclusion of requests where you’re tasked to get certain shots of all kinds in both night and day cycles leaves it so you’re able to come back for more and more, and with each Pokemon being able to have multiple shots allowed for your Photodex, you can grow a catalog tremendously and have incentive to keep finding more of every creature’s unique emotions, demeanor, and more for some special shots to show off to both the professor and the world. The inclusion of a photo album has it so you can also save some of your favorite shots to come back to and look at, and while the initial offering doesn’t seem like much – being able to hold less than 50 of your favorite photos – eventually once you get low enough the game will ask you if you’d like to expand your photo album into hundreds being able to stored, so long as you’re willing to expend some storage space on your Switch.

Though New Pokemon Snap doesn’t offer much in the way of modes that you would expect to see such as mini-games to help give the game more depth (something like a rapid-fire sequence of shots you have to take in, say, thirty seconds, or having tons of Pokemon show up at once with one shot available while you’re trying to get a picture of a specific one), there’s enough there to feel like it warrants the full price tag as the amount of fun, despite the lack of variety in what you’re able to do outside of the usual research expedition, is consistent and genuinely filled with joy. New Pokemon Snap is undoubtedly something you’ll binge for the first day or two, but as you go on you’ll notice that the play time becomes drastically less and less per session as you’ve pretty much gotten the point of it after the first few hours. It’s still a relaxing time being able to photograph Pokemon in areas and ways unlike before in such a great visual direction, and I truly believe one of the best Pokemon experiences to come out over the course of the last few years.

New Pokemon Snap reimagines and reinvents a classic for the modern day, providing a game that gets you up close and personal with our favorite pocket monsters to get their best glamour shots, capturing surreal moments with breathtaking visuals that make Pokemon look the best they’ve ever been before and after the shutter. With the ability to further edit, however simple and basic the most customizable aspects of the game may be, it gives a great chance to make your best shots even better to ensure that your shots of Pikachu, Liepard, Toucannon, Meganium, and Corsola are the most majestic they can possibly be, and being able to take that extra step with online functionality and sharing them with the world alongside captions and medals give an almost Instagram take on Pokemon to further breathe life and charm into the game. Even if New Pokemon Snap is, at its core, simply taking pictures as you go on what feels like a theme park ride through various biomes, it’s the consistent feeling of excitement, despite its repetition, that exudes such an incredible feeling each time you head out to take more shots for both your research and your leisure. It makes the game an absolute joy that’s all about feeling close to the creatures we’ve grown up with and loved for so long, seeing them in a way we wouldn’t normally get to otherwise, and the smiles and happiness you get while playing New Pokemon Snap linger long after you’ve said “cheese”.