Posted on June 22, 2021 by Nicholas Serpa in Reviews, Switch 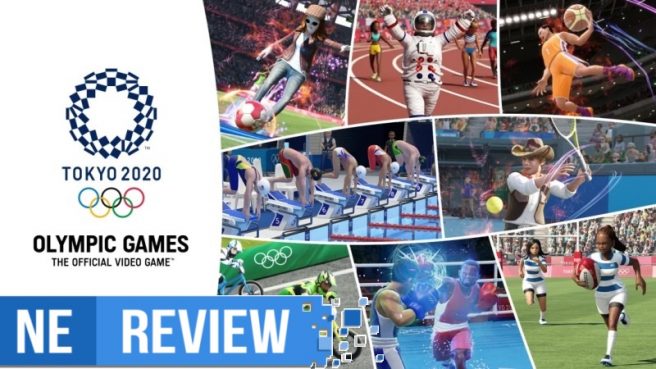 Some people eat, sleep and breathe sports. I’m not one of those people, but even I can appreciate the Olympics and what they represent – the coming together of cultures, the excitement of seeing the best athletes in the world compete against each other, and of course, all of the associated spectacle. I decidedly do not enjoy, however, the decidedly average minigame collections that typically get churned out every few years to tie in with the event. That is why I’m thrilled to report that not only is Olympic Games Tokyo 2020: The Official Videogame an excellent Olympics game, but it is also one of the best pick-up-and-play sports games I’ve experienced in a long time.

I have had an immense amount of fun playing, and replaying, the 18 included sports in Olympic Games Tokyo 2020. Most of the sports present in game are about what you’d expect – swimming, track and field challenges, tennis, soccer – although there are also a handful of more off-the wall activities like BMX, table tennis and even climbing. 18 activities may or may not sound like a lot of variety to you, but what impressed me about this collection was the amount of mechanical depth present in each sport, and how entertaining even the simplest of the games were.

Take the 100-meter dash, for example. At first glance, it looks pretty basic – mash the right button to pick up speed and get first place! But that strategy will only get you past the qualifying round. Each mini-game in in Olympic Games Tokyo 2020 has three tiers of challenge, and to even get to the finals and have a chance at winning a medal requires practice and a deeper understanding of how each game works. True success in the dash, for example, requires timing – even before the race begins, you’ll need to choose when to charge up your athlete’s stance, not to mention start your sprint perfectly on time. You can also use a burst of energy at the end of the race to quickly pick up speed and try to gain the advantage, but do it too early and you’ll wear yourself out and probably slip to last. And just like in the real Olympics, all of this happens in what feels like seconds. 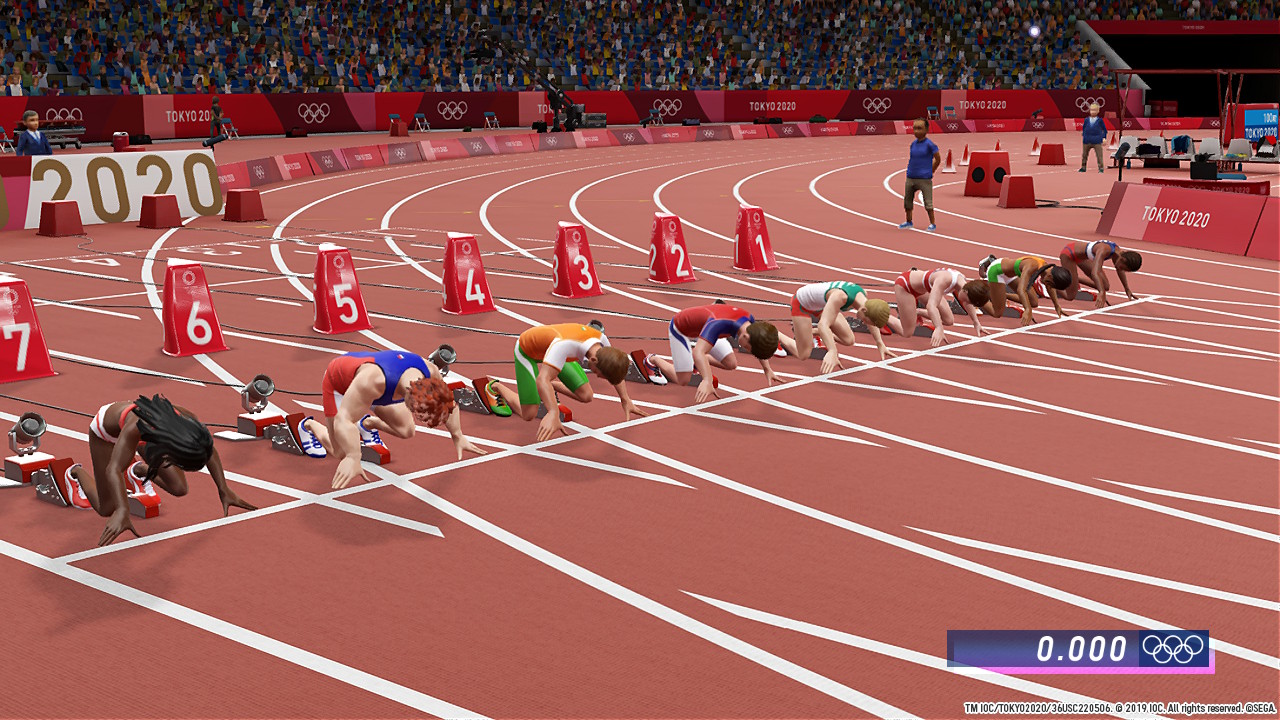 The situation is the same with the other sports. Speed climbing has you attempting to reach the top of a climbing wall faster than your opponent, but it requires more than just button mashing – you also have to carefully (and quickly) aim where you want to climb next, picking up seed as you go. Miss too many times, and you’ll actually fall off the wall completely, losing instantly. And both tennis and table tennis actually require you to aim your shots at higher difficulties, even applying backspins and topspins to try and psych out your opponent.

A handful of the sports in this collection even have enough depth to them that they could probably stand on their own as downloadable eShop games, at least from a gameplay perspective. My favorite game in the whole collection is baseball, which surprised me because I normally cannot stand watching the sport on TV, and yet playing it in Olympic Games Tokyo 2020 was consistently satisfying. Just as in real baseball, it’s not as simple as swinging a bat. As the batter, you have to gauge where the pitcher might actually throw the shot on top of timing your swing correctly and be prepared to make split-second changes to avoid swinging a strike. Pitching is all about outwitting your opponent and throwing in patterns that the batter is unlikely to predict. It felt, during my play sessions, just as much about strategy as it was pure skill – and I found myself wanting to return to it often, despite there being only one field to play on. 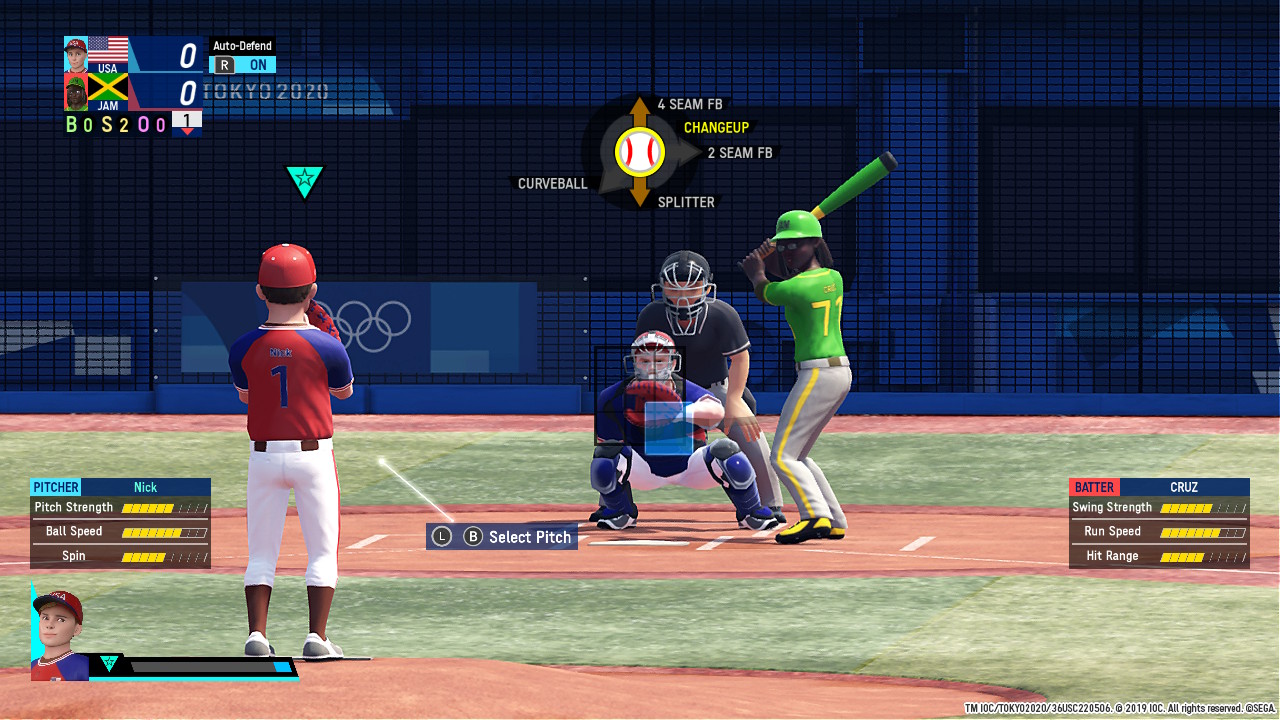 There are a lot of mechanics to master in each sport, and such mastery is necessary if you want to get the finals. For many of the sports, if you don’t at least place in the top four you won’t qualify for the next round and will be unceremoniously booted back to the event selection screen. While it does at first feel like the AI is possibly pushing the boundaries of fairness, it is definitely possible to place in first, but doing so has to be earned, which I found refreshing.

Despite this, Olympic Games Tokyo 2020 still feels totally appropriate for casual pick-up-and-play sessions. At the end of the day, this is still a mini-game collection, and fun is clearly the focus here above realism. Across the board, the presentation of this game is right along the lines of something like Wii Sports – depictions of sports that are realistic enough to feel grounded, but with a decent dose of silliness present throughout that elevates the experience to something relatable. I loved watching the camera dramatically zoom in on my avatar’s face as I nailed a special move in tennis, with my racket literally on fire as I did so. And I was thrilled when I discovered that, at the start of every event, I could push a button to strike a funny pose and make my character salute an audience of thousands.

A huge surprise for me was the insanely robust character creator in Olympic Games Tokyo 2020, which legitimately ranked among the most fun I have ever had making a character in a game. There is an almost absurd number of options to make a character that looks like you. Not only can you do inane things like separately tweak the contours of your face from both the front and the side, but there are a ton of hairstyles, accessories, and colors to choose from, and a ridiculous number of noses and eye types. There’s even a tool that lets you randomly generate batches of characters, and then choose which facial features you want to keep as you try and generate an avatar that you like. There are RPGs that don’t even have this level of customization. I have no idea what SEGA was thinking when they decided to make such a fully featured character creator, but it’s so cool that they did. 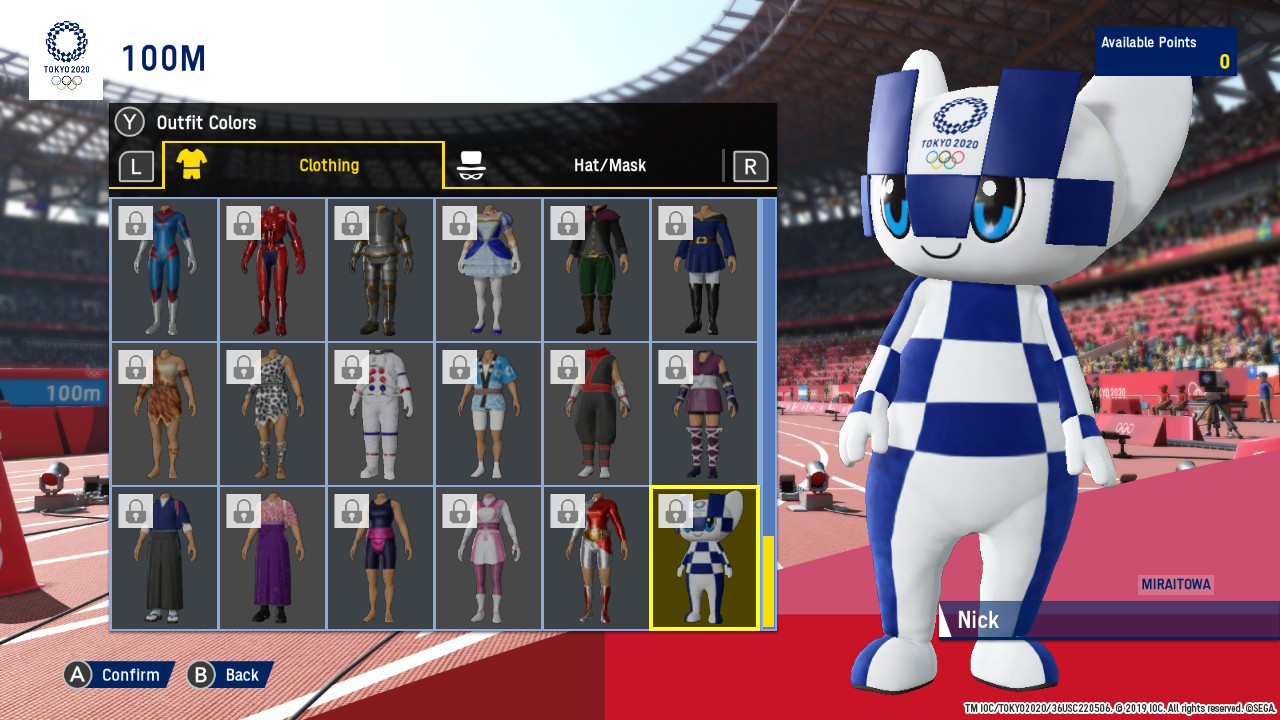 Doing well in the mini-games gives you points, which can be spent on unlocking a ton of new costumes and accessories for your character. Ever wanted to play sand volleyball while dressed as Sonic the Hedgehog, or ride a BMX bike in an astronaut costume? Well, now you can! Crazily, there are actually 100 different slots in which you can save your custom character creations and load back up at any time. And not only can you use this feature to change what your player character looks like, but you can also set designs for each of your AI-controlled teammates. If you wanted, you could make a bunch of Harry Potter avatars in-game and have them play alongside you during single-player soccer matches, for example. It’s a feature I had a lot of fun playing around with and should definitely help extend the replayability of this game.

That’s good, because the only real game modes here are single-player and multiplayer. Both are relatively straightforward and involve just picking which game you want to play next from a list – unlike the Mario & Sonic series of Olympics videogames, there isn’t a dedicated single player campaign or a quirky party-style mode as far as I could tell. You can, if you like, build “playlists” of activities that play through in whatever order you want, but that’s about it. Fortunately, both the game has online multiplayer in addition to local play, and so it’s possible to compete against other real people if players so desire. 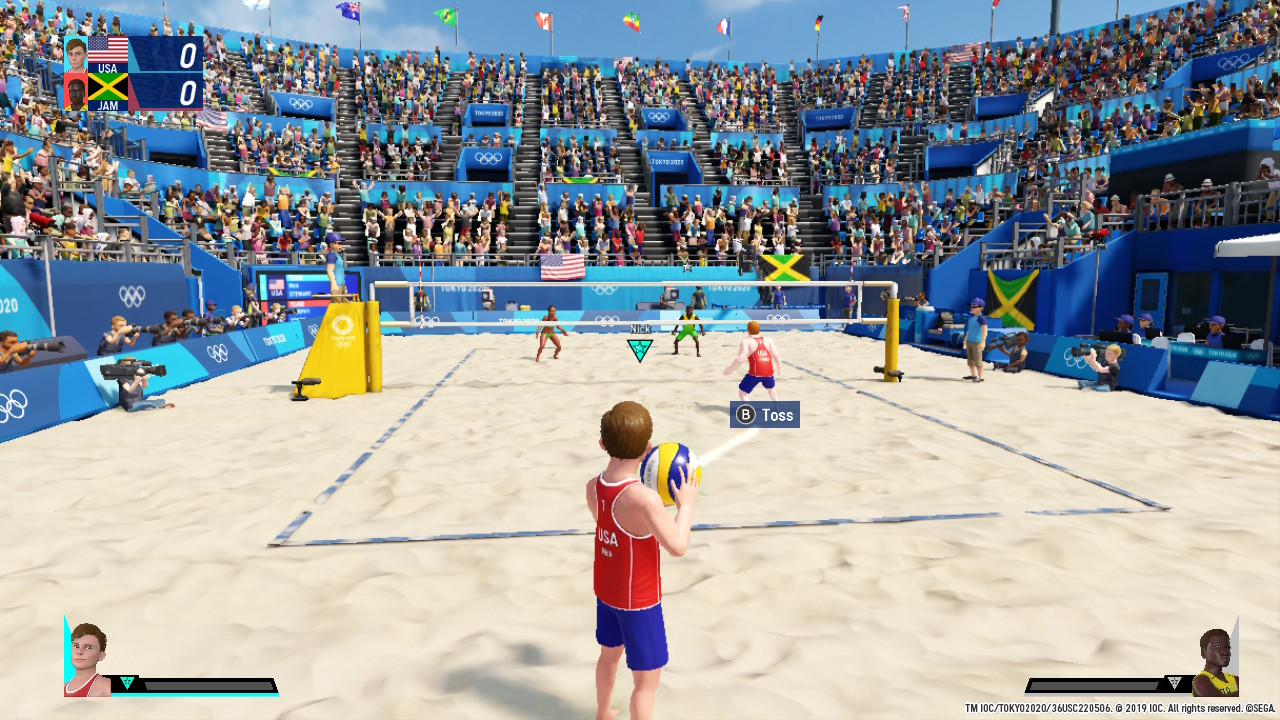 You can play with a maximum of two players locally, either on one Switch console or via local wireless connection if you have a friend with the game in the room. You can also join both public and private rooms online. Joining private rooms can be a bit of a pain as you have to manually send a code to your friends, but I love that the option exists. One of the things I loved about online play is that, at least for some of the sports, it seemed like it was possible for the host to set matches to last longer than in single player modes. For example, its possible to set volleyball games to end when someone hits 11 points in online play, rather than 5 in single player. (It doesn’t seem possible to make matches longer in single-player mode, but it’s possible I just haven’t figured out how to unlock that feature yet.) You can also send chat messages to the players from a pre-composed list of options. There are even ranked matches available for those who truly want to compete against other players from around the world. Overall, it’s a pretty comprehensive suite of options for folks hoping to play with friends or strangers.

The icing on the cake that is Olympic Games Tokyo 2020 is the outstanding technical performance of the Switch version. This game is beautiful, colorful and technically impressive at almost every turn. I have no idea how the wizards at SEGA were able to render massive, detailed stadiums filled with thousands of 3D animated fans in the stands, but they did, and I never noticed any form of slowdown during my play sessions, even in handheld mode. Animations are smooth and nuanced, and the texture work on some of the costumes and environments is better than even some Nintendo-developed games. It’s a great example of what a properly-optimized Switch game looks like, and the excellent visuals elevate the entire experience.

Really, the only aspect of Olympic Games Tokyo 2020 that I found unremarkable was the music, and it’s hardly something I can justify complaining about when the rest of the package is so strong.

Olympic Games Tokyo 2020: The Official Videogame is a substantial, highly replayable minigame compilation with a surprising amount of depth, a wide variety of activities to compete in, and just the right amount of humor. While most licensed tie-in games often struggle to appeal to audiences beyond just the casual player, the skill ceiling required for achieving true mastery of these 18 included sports is higher than most would expect, and plenty of customization options can help keep the experience fresh and fun for longer. It’s also a wonder to look at, with incredibly crisp and colorful visuals that surpass what many Switch games are capable of. The fully-featured online play modes are also a huge perk for a game like this, and exceeded my expectations. Olympic Games Tokyo 2020: The Official Videogame will likely remain on my Switch for a long time, and I’m genuinely excited to keep playing its rewarding take on arcade sports for years to come.