Posted on December 4, 2022 by Elias in Reviews, Switch 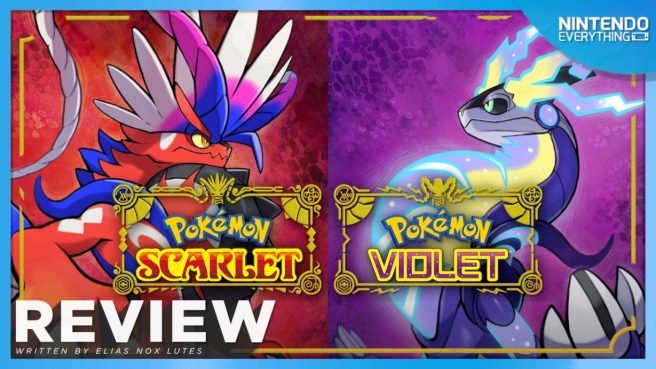 After impressively selling over ten million copies in just three days, trainers around the world have been exploring Generation 9’s new Paldea region in Pokemon Scarlet and Pokemon Violet. With a completely different open-world and open-choice approach to the longstanding and rather traditional series formula, the new games aren’t afraid to break the mold. How does this completely different take on Pokemon work out for the modern player, not to mention series veterans that have been around since before Pokemon GO took the world by storm? Diving into our own journey across Paldea, what will we find? As always, a world where dreams, adventure, and friendships await, of course.

The Paldea region both looks and feels massive. Colorful landscapes and multiple types of biomes make the world incredibly fun to explore, and discovery is more fun than ever. Crossing the region on foot would be more than a little daunting, but luckily we’ll have plenty of help getting around for this one with our legendary Pokemon friend – Koraidon or Miraidon depending on your version – giving us a boost of speed and a rather nice taxi service that allows you to fly to previously reached locations directly from the map. Getting places for the first time is the challenge.

The player character is a brand new student at Naranja Academy or Uva Academy depending on whether they go with Scarlet or Violet, and will meet plenty of other students and teachers rather quickly – including a Champion-level student named Nemona, who becomes the player’s friendly rival, a boy who really loves his dog, and a mysterious and quiet student with an air of intrigue. These three friends become entwined in the game’s progressive paths as the player adventures through Paldea, and grow alongside them as various milestones are completed. Their stories and writing are phenomenal at most times, and every task completed provides rewards some way: a new ability for your motorcycle friend, stronger Pokemon will listen to you, access to an expanded list of shop items, and more. 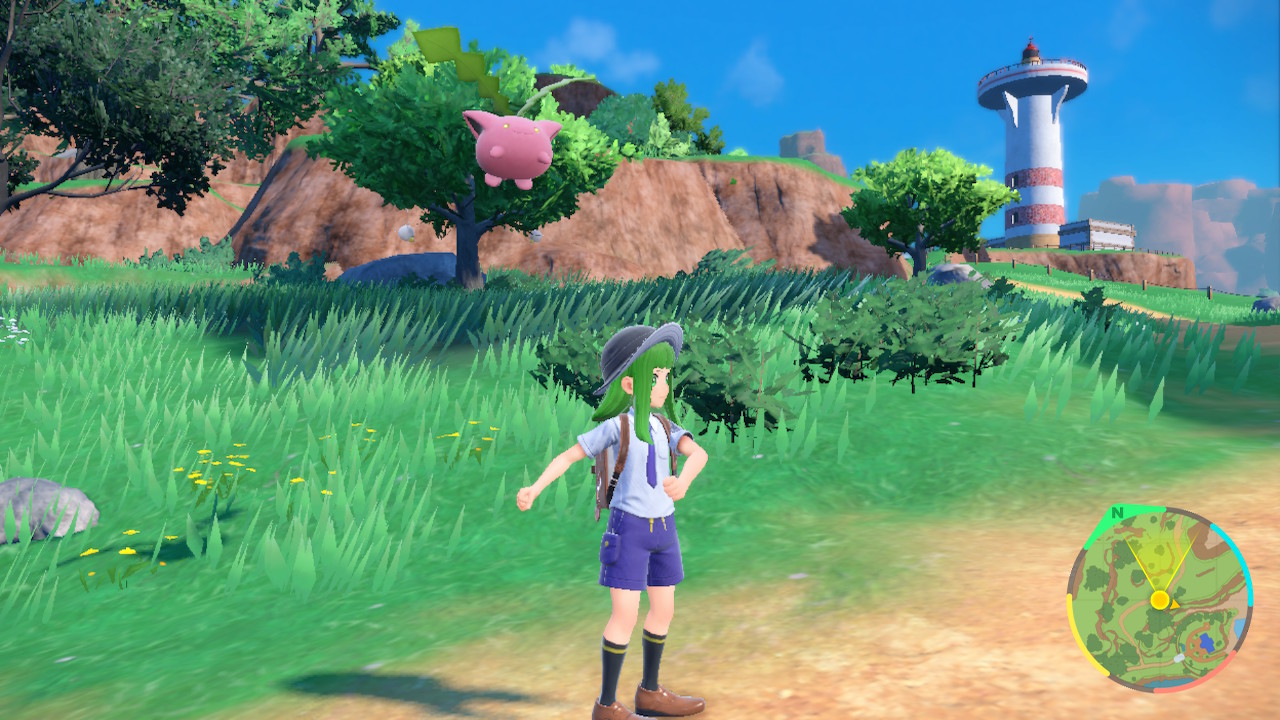 Traditionally, rivals and side characters were fairly one-dimensional and easy to understand. Pokemon games were also large patches of grass full of random encounters, long winding caves that you had to light up using a Pokemon’s special move, and long grinds of turn-based fights in order to level up your team and if you were lucky, you’d have a few Rare Candy items in your bag to level up a bit if you found yourself in a pinch. However, Pokemon Scarlet and Violet are far from traditional. Unlike past titles, there is no linear path of progression. Students of a Pokemon Academy are, after all, a bit different than kids who set off on their journeys directly from home. Paldea is also a bit of a different region.

As an academy student, you’ll spend time taking classes and battling with your friends. This is your normal daily life until a special time in the school year: the Treasure Hunt. This event is huge for the students, as they are able to freely roam the region and pursue their own treasure. What the treasure is, of course, is different for each trainer. Setting out like this is not a linear and rigorous learning path like an organized education system offers. The Treasure Hunt is a time for the learners to go out and find what it is that they want on their Pokemon journeys. Will they take the gym challenge? Will they go fill out their Pokedex? The choice truly is up to them. If all you want to do is explore and take your Pokemon on picnics? You can do that. You can also go back to the academy at any time for classes with the Academy’s teachers, but the majority of our time will be spent trekking across Paldea.

Traversing the world and finding your way to objectives can be a little overwhelming at first, and the map system doesn’t really do us too many favors. While I absolutely love that you can turn the camera angle and orient yourself toward an objective, the map system’s many functions can make doing what you want a little more complicated that it needs to be. Zooming in and out on the map will show various regions, but zooming out too far brings you to a screen that shows what all objectives the player has completed so far, and what else there is still to do. Getting back out of that screen is also not the B button, even though I still press it every single time. 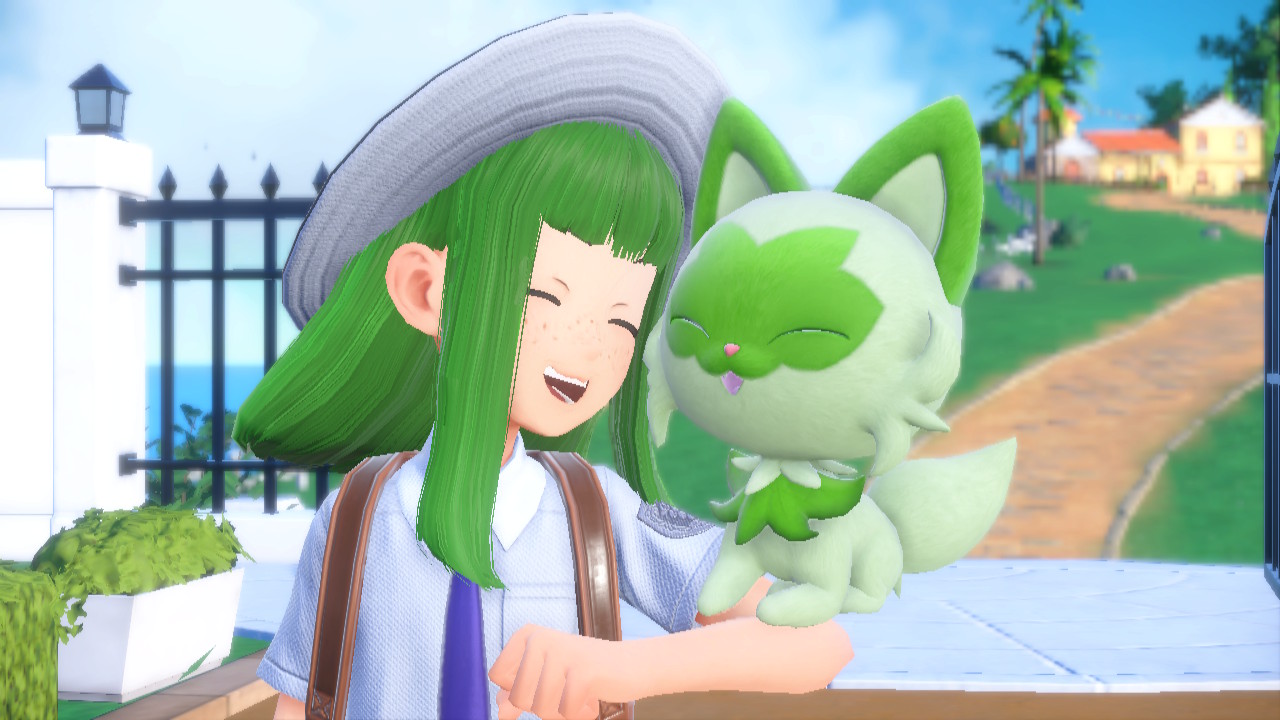 Map woes aside, the open expanses of Paldea are basically yours to traverse as you see fit. Using Koraidon or Miraidon’s help, more and more areas will become easier to access as you progress in objectives, and that also means more of Scarlet and Violet’s Pokemon will be accessible for catching. The games do have a healthy list of creatures both new and old, but like Sword and Shield before them, not every creature will be available for use. A limited Pokedex still needs completing, though, so that does mean relying on a critter or two that you may not have given a chance to before. Interestingly enough, the early offerings are quite nice for things to catch, and critters I caught in my first hour are still in my end-game party.

The Victory Road route in game is headed by our friendly rival Nemona, who will push the player to complete the gym challenge and provide encouragement along the way. No matter which gym you go after, or in which order, you’ll be able to take them on. Each one has a “Gym Challenge” which is sometimes a mini game, sometimes an errand, and sometimes something different entirely. The first gym challenge I took on was pushing a giant olive into a goal. Upon completion I could then take on the Grass-type gym leader. While I found this task to be silly and unnecessary, later challenges were a lot more fun. Warm up fights to get more views for a streamer gym leader, or ordering a secret menu item at a restaurant were far more fun and engaging tasks, and each win allowed me to catch stronger and stronger Pokemon for use in battle. It is the level that a Pokemon is caught at that determines whether or not it will listen to the player in this installment. 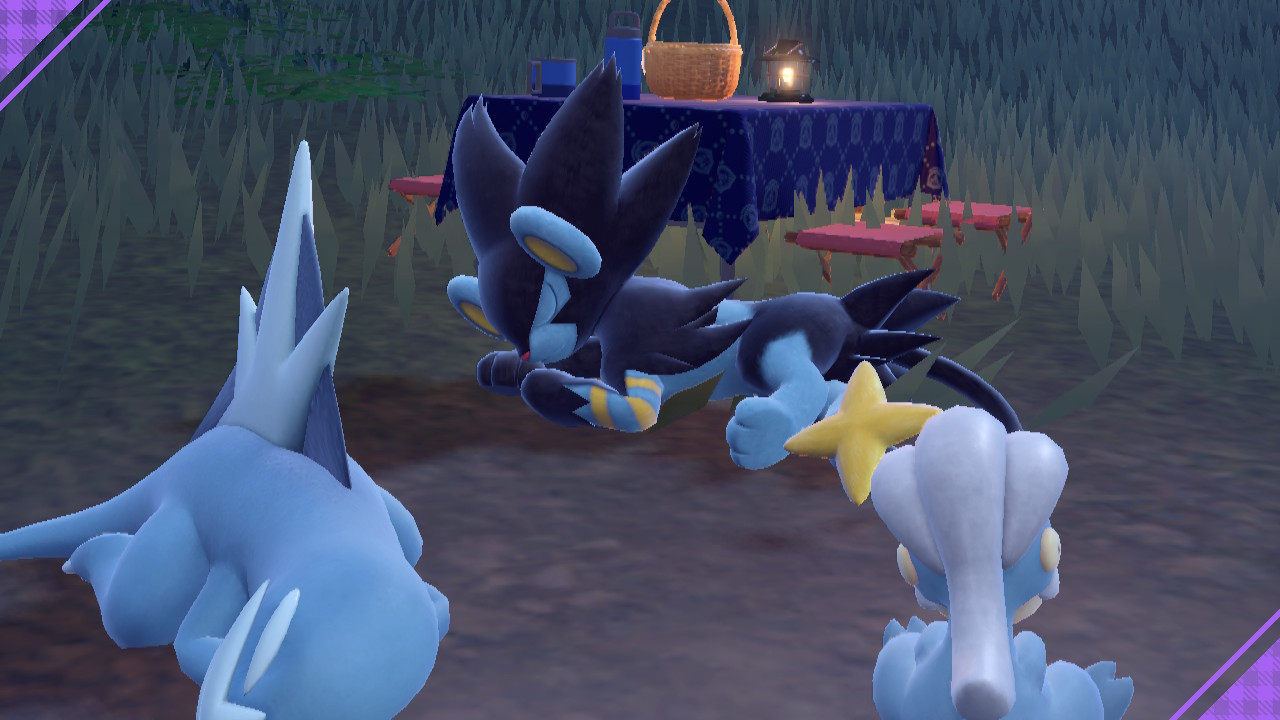 The Victory Road route really shows off the game’s Tera Type system, which allows a Pokemon to adopt a Tera typing. This type is usually something that the Pokemon already has access to, but can be a different type from the Pokemon’s. The Terastal Phenomenon is a temporary one, giving the Pokemon a gem-like appearance and switching them specifically to that type during the transformation. While Terastallized, Pokemon receive the 1.5x Same Type Attack Bonus (STAB) on moves matching their Tera Type, in addition to moves matching the type(s) they had immediately before Terastallizing. This compounds if their Tera type is one of the types they already have, resulting in a 2X damage modifier instead. This is limited, incredibly fun, and has a lot of applications for sheer power.

Team Star is a second progression route, titled Starfall Street. The Team has a reputation for delinquent behavior and bullying, and a mysterious contact named Cassiopeia asks that the player investigate and later challenge the squad bosses and claim their badges – this would mean that Team Star would have to disband. Progressing this path unveils more about the game’s story and characters, as well as helping the academy’s director Clavell get to the bottom of general kid shenanigans and truancy. This is the storyline that I enjoyed the most as a player, and found the writing to be incredibly good.

Arven helps on the third progression route. As the local professor’s son, he seems to have had a lot going on. It’s probably hard to grow up with a Pokemon Professor as a father – but be that as it may, Arven would like to go exploring during his Treasure Hunt, and this path is also quite well written. Hearing about special mythical herbs and their ability to grant strength and healing, Arven asks the player to accompany him on an expedition to hunt out the Titan Pokemon across the region, each of which has gained its strength from the powerful Herba Mystica that grow hidden throughout Paldea. Fighting and defeating the various Titans allows the player to find the five different herbs, each of which will help Koraidon / Miraidon gain a bit more of its original strength back. Bonus points here for a very stellar ending. 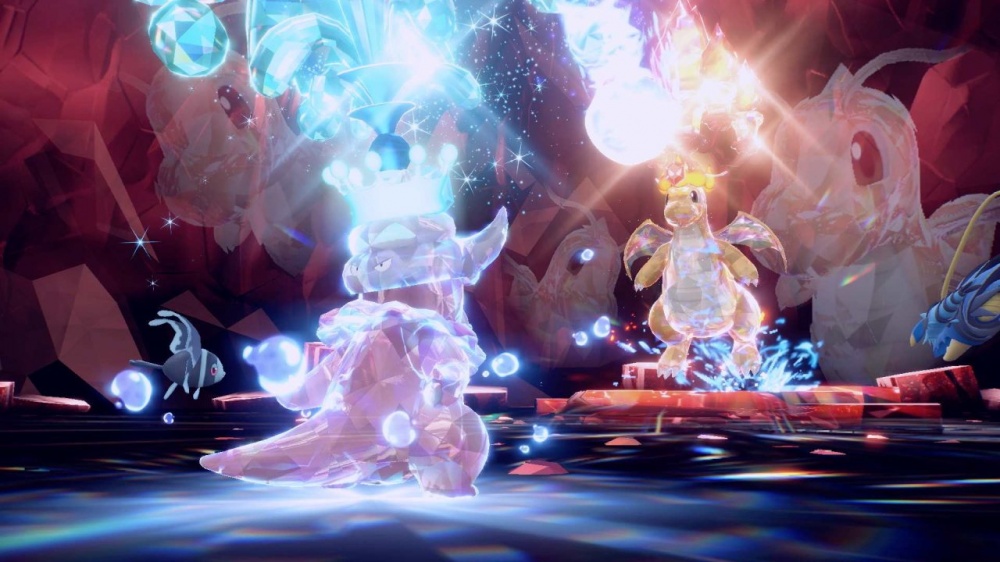 With three storylines to complete and follow, and a very expansive end game, what is there not to love about Pokemon Scarlet and Violet? Graphical issues, for one. The world will often adjust and resize like putty while you are exploring, and overworld NPCs are very jagged and have significant pop in and low movement frames. Crashing and slow down are also common. Luckily enough, a patch has since released, and while there’s been some debate as to what it actually does, I personally have seen an improvement. My spouse has not, and has still experienced significant slowdowns and weird graphical anomalies. Although these experiences do still seem to be widespread, I haven’t actually had a bad time with this game. Even through three separate crashes and a lot of lag, I’ve still enjoyed every moment I have spent playing.

Were there moments where I wanted to pull my hair out? Certainly. Slow down will do that to you. Trying to jump up the same cliff to get somewhere for two straight minutes will do that to you. That last one is probably your – er, my fault though. I’ll stop doing that. Experience Share always being on? Annoying at first, but I’ve since stopped caring. These games are not the same as the ones I grew up with, and that’s a good thing. This is the evolution of the series, and this is something that a lot of us have wanted for a very long time. A truly open-world Pokemon experience is out there, and yeah, right now it’s a bit clunky, but I’m having a fantastic time.

Pokemon Scarlet and Pokemon Violet have definitely changed the way we will experience the series from here going forward. While some may say this is just a proof-of-concept with the primary issues aimed at technical performance and visuals, everything else feels thoughtfully crafted. As events roll out for end game and performance patches hopefully join them, I’m sure we’ll dig this generation for years to come.

Pokemon Scarlet and Pokemon Violet copy provided by the publisher for the purposes of this review.