Posted on April 24, 2017 by Jakob Vujovic(@jakovujo) in Reviews, Switch 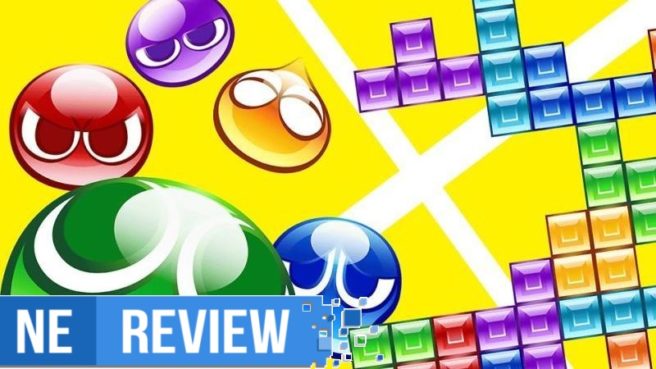 Puyo Puyo Tetris – a crossover of Puyo Puyo and Tetris – has been around in Japan since 2014, having released on just about every platform. With the Switch version as a Japanese launch title, it’s finally getting localized, albeit two months late. It goes without saying that Tetris is well known in the west with its release on every platform imaginable, though SEGA’s Puyo Puyo series is far less renowned internationally as it is in Japan. The last time a Puyo Puyo game saw an official international release was on GameCube in 2004.

Going into Puyo Puyo Tetris, I was well acquainted with Tetris and just sort of floundering around with the Puyo Puyo game modes. If I really need to explain this, in a regular game of Tetris you place falling blocks in a grid. A complete horizontal row scores points and disappears, leaving more room to stack more blocks. Complete multiple lines subsequently to score extra combo points. In Puyo Puyo, the player directs two-piece falling jelly-like puyos, each one a different color. Match four or more of the same color and that group will disappear. Combos here require a different kind of forward planning than Tetris. Because puyos have more elaborate physics than tetronimos, combos have to be stacked and set up vertically, keeping in mind how puyos at the top of a stack will land on a matching color set up at the bottom.

It’s these two very different ways in which each puzzle game approaches the thought process behind combos that makes Puyo Puyo Tetris an interesting crossover. This fusion makes it into something of a game of rubbing your belly and patting your head – managing two cognitive functions – as much as it’s the regular challenge of playing either one game effectively. 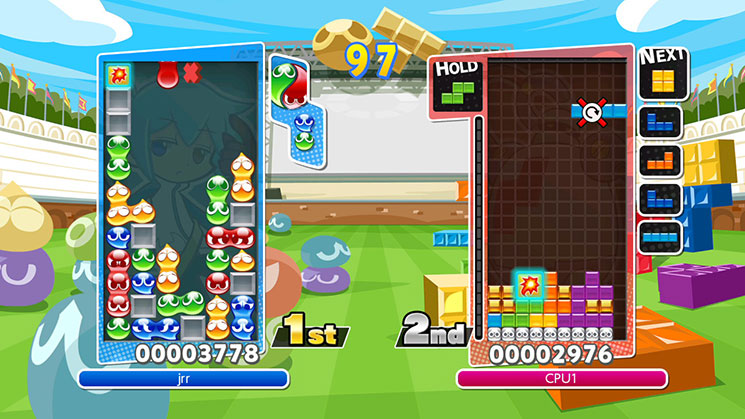 The mileage this game gets out of having these two prominent puzzle games in terms of the breadth of game options and extras makes it seem like Super Smash Bros. director (and creator of a forgotten DS falling block puzzle game Meteos) Masahiro Sakurai was secretly at the helm. There’s a shared meticulousness to all the extra skins and game options that cater to the most obsessive tastes. Even the menus have a similar flair in the way that their many, many layers and sub-menus are filed away.

There are typical non-crossover modes that would be found in a regular Puyo Puyo or Tetris title. These are nice to have, but the crossover modes are where things get interesting. As someone who feels they’re at least competent at Tetris but a fledgling-at-best puyo plopper, I found myself gravitating toward the “Swap” crossover mode. Either playing against a CPU or another person, you play either Tetris or Puyo Puyo. After a set interval of time the Tetris game board is put on hold and swapped for Puyo Puyo, or vice versa. Play the games better than your opponent and you’ll send them junk blocks or puyos until they become unmanageably screen filling. Keeping my lopsided skill set in mind, this was the easiest crossover mode for me to wrap my head around. It achieved that belly rubbing and head patting coordination balance just right for my brain. 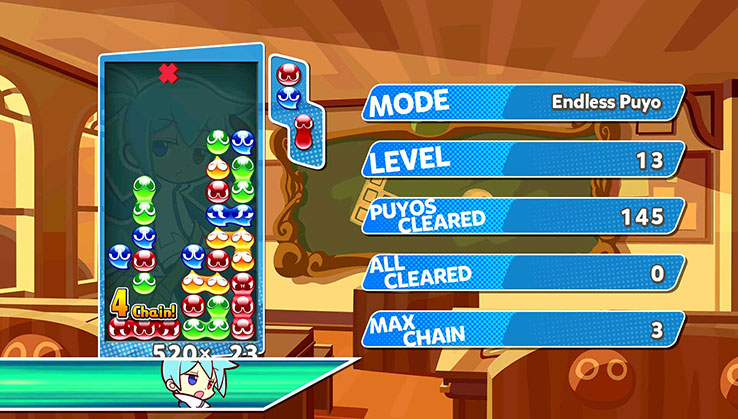 By comparison, the other crossover modes are like eight dimensional chess. Where Swap mode has you playing fairly vanilla versions of these two games, each on their own neatly squared away boards, “Fusion” mode has both puzzle games played on the same board. Tetronimoes and puyos will be cued up randomly, with certain pieces that even periodically switching between one or the other as they fall. This mode isn’t a totally incomprehensible mess of blocks and blobs. Like mixing oil with water, tetronimoes always sink to the bottom of the board and puyos float above them. In many ways Swap mode is really just training wheels for this more fully realized crossover. The onus is on the player not only to become proficient at both games, but to develop a reflex to juggle them together. While seemingly unmanageable at first, Fusion mode is the game mode that I keep coming back to.

All of these game modes can be played in any configuration of single or local multiplayer that anyone might need. Want to play with four players in the Switch’s tabletop mode? The screen is impractically small for that setup but they let you do it anyway. Do you have multiple consoles? You can create local multiplayer rooms.

Online play is also well featured. You can join a friend’s game directly or play any game mode with a stranger in either a competitive ranked mode or regular free play. If you feel so inclined, there’s even the option to upload and view saved matches. Considering that everyone I encountered playing online was in Japan and my Switch’s unusually weak Wi-Fi signal, there was only a small amount of latency and stutter. Performance online wasn’t ideal but it’s hard to say how that will fare when your opponent isn’t halfway across the globe. 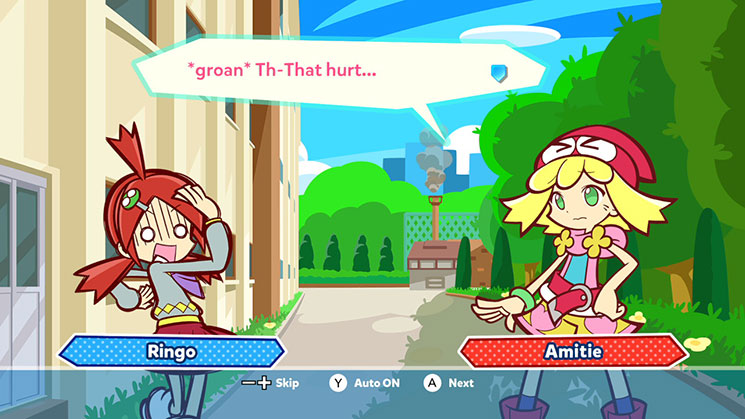 Puyo Puyo Tetris has a story mode, too. I didn’t ask for it, but it is certainly there. You might think “what took them two months to bring out a localized game in a genre with notably little in the way of words?” While I can’t say I know for a fact, I have a sneaking suspicion that the overwrought nonsense story is the reason. It’s at least self aware at how contrived its vignettes are to give an excuse to sample its many game modes. That doesn’t make it any more tolerable. They’ve created a whole crossover cast of characters. Who knew that Tetris universe was so rich with personalities like Zed the alien caretaker robot that exclaims “vitamins” and “minerals” every time a combo hits? Zed and the puyoverse’s dancing fish Suketoudara really redeem the otherwise generic cast. To the music!

Puyo Puyo Tetris is really all you could ask for in a full console version of these two falling block puzzle games. There’s a borderline obsessive attention to detail when it comes to configurations and game modes. I can’t really imagine a scenario where someone who is either into Tetris or Puyo Puyo would be left wanting, especially when the crossover features are excellent and unique in their own right.

Puyo Puyo Tetris review copy provided by SEGA for the purposes of this review.