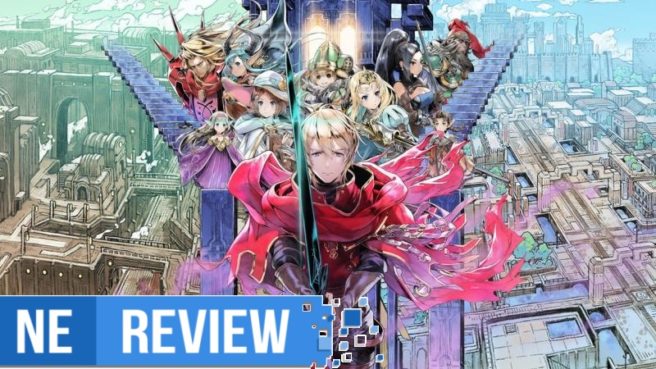 It amazes me how even after years of incredible games from a system’s lifecycle, we have been consistently impressed with the “cherry on top”, if you will, at the very end that leaves its mark and gives players one last hoorah before the inevitable new generation. It was Zelda: Breath of the Wild on Wii U for example, and now Radiant Historia on 3DS. With Radiant Historia, we can revisit one of the titles that made the DS so great, and gladly add it to the 3DS’ ineffable library of RPGs. It’s an encore that shows nothing but respect for the craft, the legacy of the DS and 3DS, as well as the genre as whole.

Radiant Historia, for those unaware, originally made its way to the DS at the end of 2010 in Japan and in the early months of 2011 in the west. Although a niche title, it has been one of Atlus’ hidden gems since its release and beloved by many. I only had a chance to play it briefly back then as my DS was mainly a Pokemon machine before my eyes opened and I began using my 3DS to catch up on games I’d missed from that era, so this is a welcome treat to come back to all the times I passed by it in a store, unable to look away thanks to the beautiful art direction on its cover, as well as the engaging story, and wonderful spritework.

Players will be put in the shoes of SI agent Stocke, a soldier for the nation of Alistel which is in a constant loop of stalemates and war with opposing nation Granorg. While the world is succumbing to a disease called the Sand Plague, Stocke is bestowed upon him a book called the White Chronicle, which helps him travel through alternate timelines to set the correct course for history. Though flummoxed, Stocke is determined to save those around him and make sure that the outcome is favorable to humanity and evil is subsided, but even with the power of time on his side, sacrifices must be made in order to keep history balanced. 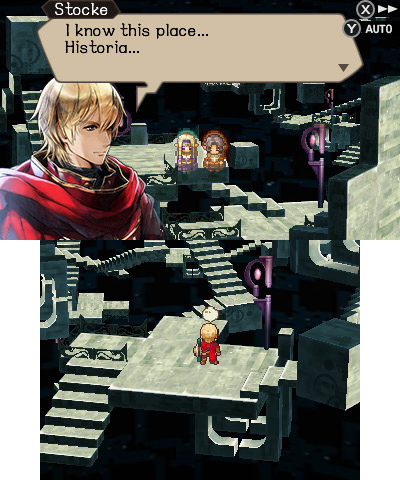 The story offers a deep look into Stocke and his struggles with having such a powerful tool by his side while doing his best as one of the best soldiers around to protect the people of Alistel at all costs. Players will have the choice at the end of the day deciding where they want to go next in history, and while there are many points in the White Chronicle they can go back to, every choice has an action and a reaction and can affect multiple timelines at once.

To revisit these crucial choices and follow a new path, you can go to Historia and use the White Chronicle to go back in time and relive some events, as well as change the course of history. All of this is possible without having to start the game over, which is nice. Most properties that handle anything related to time travel – whether it be a film, game, book, etc. – typically aren’t very fleshed out, become unnecessarily convoluted, and don’t really leave you content by the end of it. Radiant Historia is different however, respecting the idea without going too crazy on the science and the how’s and why’s – it just is. You accept it as a mechanic, and you move on. This makes it flow in a way that, despite multiple paths, is so seamless and fluid that every choice and path you take feels genuine, not forced to reach a certain outcome so you don’t get to a game over screen. Games like this, Steins;Gate, the Zero Escape series – they all respect time travel in a way that just simply makes sense without you having to be an Aerospace Engineer, though those particular titles are arguably a lot more scientifically inclined. 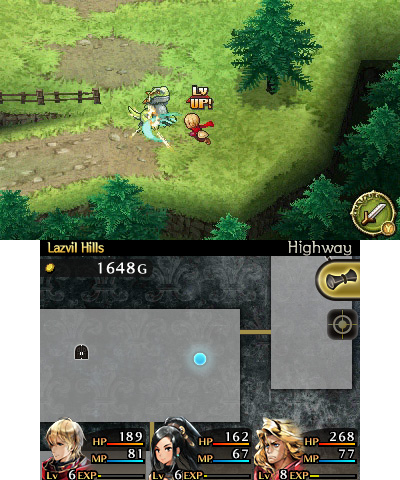 The story in Radiant Historia: Perfect Chronology is slightly different this time, however. New timelines, events, and characters have been added that bring exciting new possibilities to the outcome. Because of this and its ability to drastically alter circumstances, Radiant Historia: Perfect Chronology allows players when beginning a new game to choose between the classic story from the original DS release, or the tweaked, updated adventure in this 3DS enhancement.

New aspects like Easy Mode, which have been added, make it possible to go through the game with little to no fighting, if you really much rather focus on the story. The standard Strike move, which is utilized by pressing the Y button to hit enemies in the overworld, is upgraded to Hyper Strike and instantly kills most enemies. This also saves you from having to go through a battle, and still gives you all the experience and loot you would’ve gained having played through it normally. While most RPG fans may stay away from the Easy Mode and play normally, I actually find it really handy and rather amazing that this a feature that gives the option to truly enjoy the story without having to do all the grind and excess filler stuff in between. At a time where people are more busy than ever and the video game industry has seen week after week of incredible titles, I find this to be a welcome addition and something more games should adopt in the future for those that want to invest into the game and the story but don’t have much time to do so in a traditional fashion.

The player will still find themselves in important, story-mandated battles, though, and these battles take place in turn-based ways that are laid out in a 3×3 grid, up to nine enemies on the field and three of your party members battling at once (though you can have more in your overall party). The battle system puts a lot of emphasis on combos, stressing that these are the most efficient way to deal out the most damage and slay those that oppose you the quickest. You can manipulate where enemies stand and stack them on each other as well through various skills, and changing your party lineup mid battle to unleash an onslaught of damage to all at once.

A new addition to the battle system that’s also been implemented this time around are Support Attacks. These attacks occur at random, but their frequency and chance of trigger is based off the Lucky stat each character has. Obviously, the higher it is, the better a chance of an arbitrary and unexpected attack, though sometimes they may come out to heal the party instead, especially for healers. It’s a straightforward battle system that also does well to be different enough to not be a standard turn-based battle or active-time battle component. It finds a sweet spot in between that works to its favor, but also gives the player the ability to be strategic without being put on a timer. Whether you’re playing in Normal or Easy, you get the hang of it pretty quick and end up finding it rather engaging. 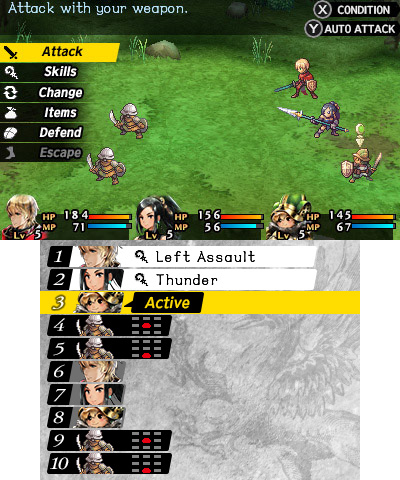 Radiant Historia: Perfect Chronology has so much to love about it that it’s easy to overlook the negatives, though there really aren’t many. The biggest complaint I may personally have with it – and this doesn’t even affect the game itself – is that there is unfortunately no 3D feature. While this certainly isn’t a game breaker for most, including myself, this is one of the few games I think I would have actually preferred a 3D-enabled feature due to the fact that, thanks to its mixture of sprites and meticulously crafted 3D environments, it would have been the closest the 3DS got to having its own Project Octopath Traveler. I think it really would have made the game pop a little more, despite it already just being beautiful in its own right. And while the voice acting may also not wow many, having its inclusion is a massive plus and makes it much more immersive, bringing the characters to life even further. The character development and the relationships between everyone you meet is already stellar, and being able to hear them talk to each other and emote beyond the text is a really great thing to have compared to the original. However, it’s worth mentioning that the entire game isn’t fully voiced, only important characters. Other NPCs and one-offs will have either grunts or phrases like “I see” and “Very well”, while the text may say something completely different but is more or less a variation of said response.

Complaints I typically have with RPGs of this nature usually stem from a character’s walk/run speed not being good enough, a lack of save points when one isn’t made available in the main menu (and if it is, one that doesn’t insist on suspending your game afterwards), immense filler to artificially prolong the game, unnecessary side quests to feel like there’s more to do despite the lack of merit, a horrendous inventory management system (like not showing stat differences when equipping a new weapon), and many other things, but Radiant Historia: Perfect Chronology simply doesn’t have any of these problems. Though the user interface may be its biggest fault and certainly the least pretty part of an otherwise gorgeous game, it still remains accessible and intuitive. 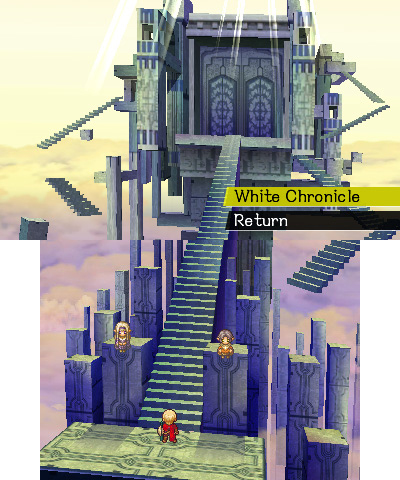 Overall, Radiant Historia: Perfect Chronology is a faithful and exceptional port with just enough added content to keep it refreshing for those that played the original, but not so much to the point where it feels like a completely different game. What was once a classic remains a classic. I also know this is something that is said rather frequently when discussing a score complementing a game, but the soundtrack is truly a reason in itself to pick up this title. The beautiful staccatos of the violins to the cries of a cello – there’s a piece for every occasion that is so meticulously crafted and ineffable, and you can thank Yoko Shimomura of Kingdom Hearts and Final Fantasy fame for her brilliance when it comes to scoring the likes of this. Whether you’re jumping in for a second time years later, missed it for the first time or have never heard of it before, if you have even the slightest interest in RPGs, Radiant Historia: Perfect Chronology will be an absolute must-have. There are no excuses.

The 3DS has arguably one of the best libraries in any system’s history, and with the incredible amount of stellar RPGs, I can safely say now that Radiant Historia: Perfect Chronology is on it. This game qualifies as one of the system’s best – easily top ten RPGs for the system. From the captivating story, engaging battles and cut-scenes, palpable score, and bleak yet vibrant world, it’s the perfect title to end your run of the 3DS with, as well as one worth having in a library for JRPG aficionados. The characters are memorable and ones you’ll laugh and cry with as you set out on an epic adventure of hope, despair, life, and death. The sprites are brilliantly done with an unparalleled art style to make Radiant Historia as unique as ever and stand out in a sea of RPGs, even so many years later. Whether you end up making Radiant Historia your 3DS’ swan song, or even if you haven’t touched yours in a while after the launch of the Switch, just know that this will have made everything worth it. The 3DS, much like the DS before it, will have gone out with possibly one of the greatest RPGs ever made, from a company that at this point, no matter how niche the game may be, may arguably know RPGs better than anyone else at the moment.

Radiant Historia: Perfect Chronology review code provided by Atlus for the purposes of this review.