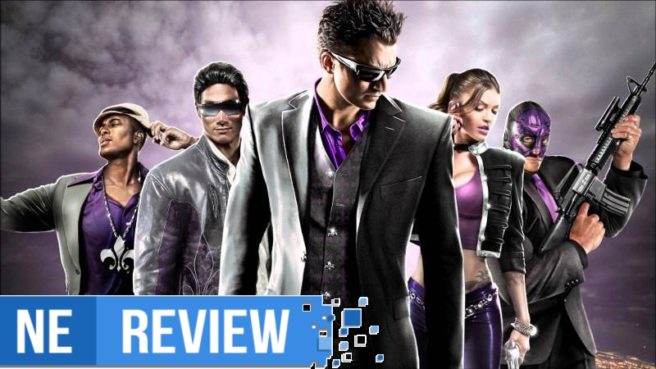 There are certain genres that Nintendo consoles have historically missed out on. During the Wii generation, the Call of Duty style shooter was sorely missed – if not for an actual lack of ports (and well-forgotten games like The Conduit), then at least for the Wii’s inability to impressively render HD set piece spectacles. Open world games in the vein of Grand Theft Auto found similar enough success to spawn countless formulaic imitations, but the open world genre saw almost no representation on the Wii, and a handful of really bad ports on the Wii U. Perhaps the Wii’s greatest legacy was the perception that Nintendo consoles are bound to miss out on those “hardcore” blockbuster experiences.

Saints Row: The Third came out at the end of the Xbox 360 and PS3 console generation, and it’s impossible to parse it from the context of the open world genre as it stood at the time of its release. More than anything, the game was a reaction to the onslaught of mediocre and humorless GTA imitators that simply didn’t have Rockstar’s immense budget to convincingly pull off all of that self-seriousness. There isn’t nearly a Rockstar budget here, but the grim face of GTA IV is absent as well. While this is the third Saints Row game, it is the first in the series to fully commit to the Old Spice commercial-style irreverent tone.

This was all very new in 2011, but the referential style of humor that irreverence relies on has a short expiry date; it’s impossible not to see this game, in 2019, as anything other than a cultural artifact. A lot of its jokes land about as well as a rage comic, or Elon Musk tweeting about “dank memes.” This particular form of viral comic sensibility is outdated because it operates in the ironic mode that was popular at the time of the game’s original release, and for years before it. Everything is couched unsubtle winks and nods (“aren’t those wacky Japanese commercials so funny” is a running gag). The transgressive gestures of irreverent sex and violence that underpins the humor of the game are just quaint now, like a corporate ad department that’s ten years too late to the party; we’re past simple transgressive irony. I don’t know if there’s a way to earnestly laugh with the game. I could only laugh at it as a pastiche of the barely-distant past. 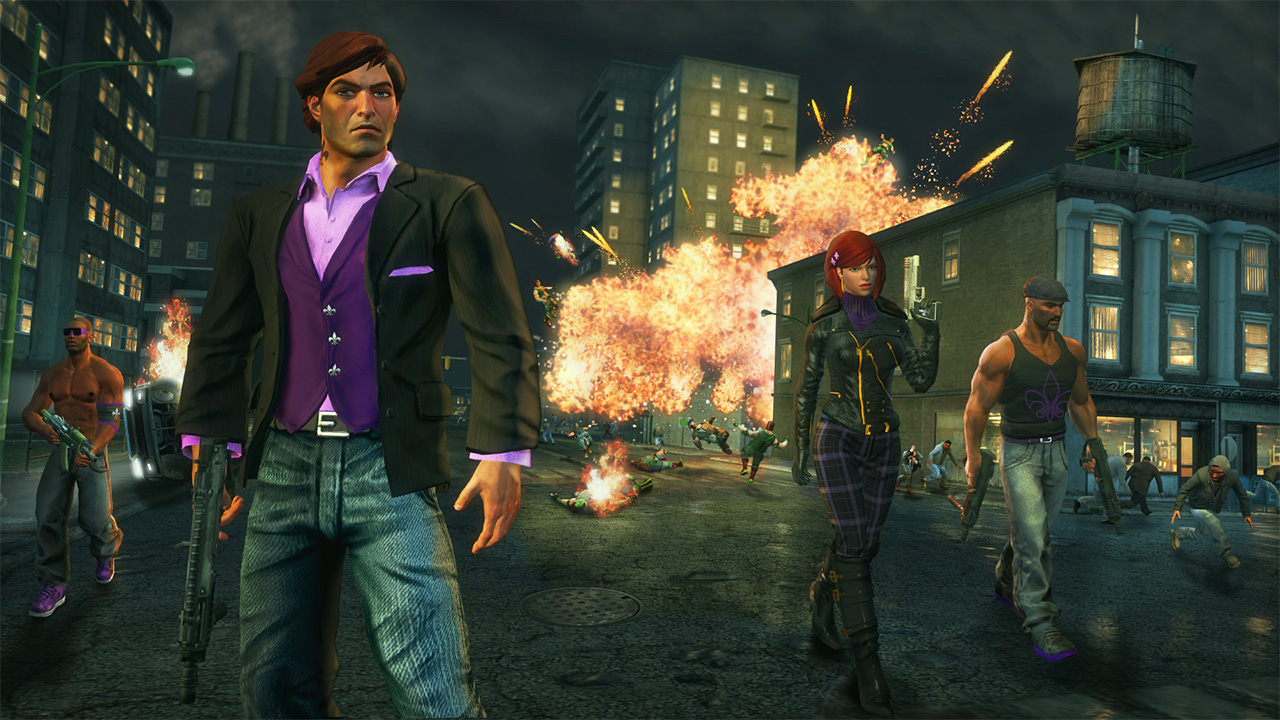 Now I’ll stop killing jokes and explain the game itself. It follows a pretty standard open world city structure: you’re free to wander around, cause mayhem, buy properties for your gang, even play with cheat codes, and when you want to progress the story you select a mission from your phone and follow a GPS route to start it. This is (or was) all standard formula, but the irreverent tone of the game makes it possible for the designers to come up with creative mission designs that couldn’t be justified otherwise. Some highlights include rolling an apartment building-sized yarn ball, Katamari-style, around the city to cause as much damage as possible, or committing insurance fraud by ragdolling the player character into traffic. The game is at its best when it lets the events unfold totally incoherently, away from the plots and subplots of its only sometimes likable cast of characters.

The main story missions are usually less creative and boil down to shooting your way through SWAT teams or rival gangs, progressing by following an objective marker. Even with the game’s arsenal of absurd joke weapons, a flopping dildo on a stick still works like a bat, and a shotgun that finishes foes by summoning a shark from under them still functions like a shotgun, more or less. There are more interesting weapons, originally from the game’s DLC which are included in this package, but they are only accessible when you reach the DLC content. Nonetheless, the story missions are mercifully to the point; the pacing of the game’s missions in general lends itself well to a handheld format, even as it can often feel like a relic of last-generation open world design trends.

There’s no shortage of things to do, and the game eventually provides the tools to clear out the many objectives on its map in whatever stupid way you might want to, including through an online co-op campaign and a hoard mode (called “whored mode”) which you can play locally or online. There are more fun little extras and features than I care to name, with protagonist customization, clothes and costumes, and bonuses that incentivize dangerous play like a meter that fills the longer you drive in the wrong lane and swerve around oncoming vehicles. 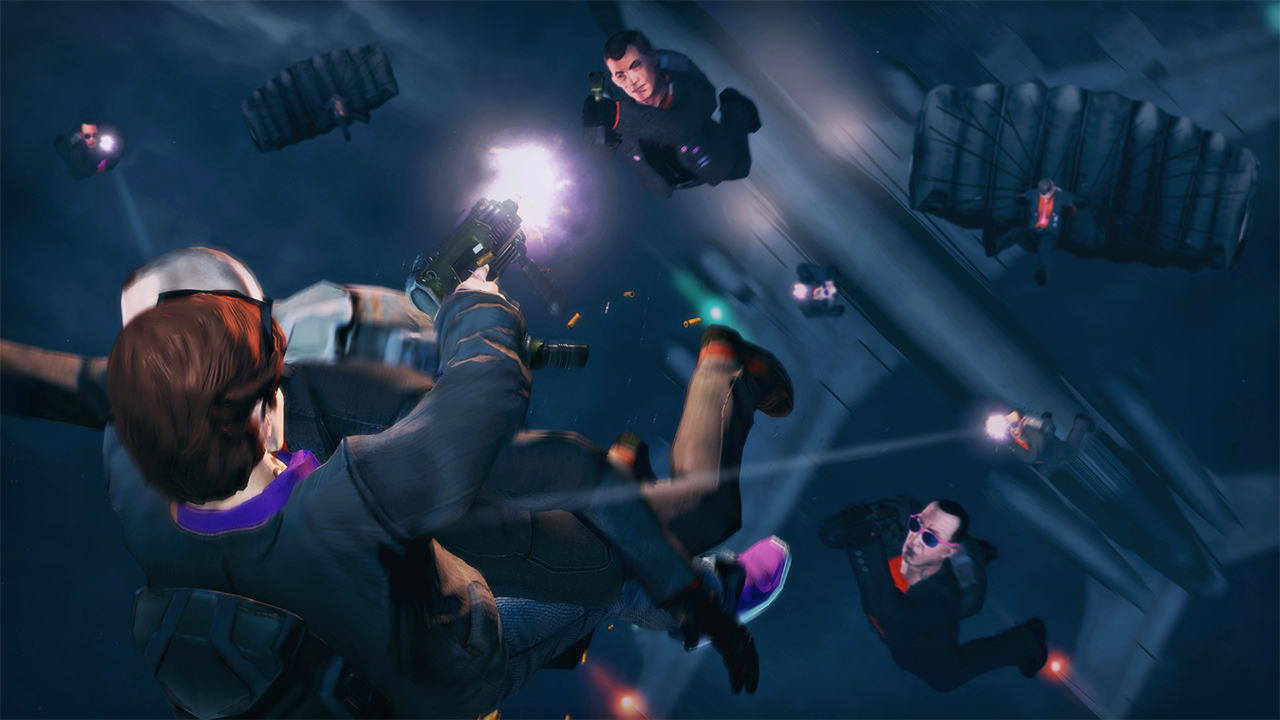 On the Switch’s screen the game looks pretty good, displaying in its native resolution. The small size hides some of the game’s more aggressive pop-in and texture loading that can look just plain bad on a TV. The only real issue with the Switch port, both in handheld and docked, is the frame rate. It’s not unplayable, but things can get pretty choppy when there are a lot of characters on-screen in a firefight. There were even a few instances where, in one of my favorite missions, my superpowered character punched a car and the full-screen explosion would freeze the game for a split second. This is an extreme case, and the bigger issue seems to be that the port has an unlocked frame rate; when I pan the camera to the sky the game suddenly runs at an impressively smooth 60 frames per second. In most normal scenarios, the frame rate really just seems to wildly fluctuate, and a simple lock to 30 frame per second could alleviate some of its performance issues. As ever, gyro aiming to help correct for the joy-con’s nubby little sticks (and the fluctuating frame rate) would be a welcome feature that’s unfortunately absent.

Despite how its conceit has aged, Saints Row: The Third is one of the better examples of an open world game from the last console generation. The humor may be outdated (if it was ever really in-date) but the rejection of its the grounded, grim, and serious contemporaries at least allowed for a fun game to emerge. It’s formulaic, but more varied than almost any open world game from that generation; you’ll never quite know what to expect in a new mission. Even as its comedy might make you roll your eyes, the novelty at least still holds. If you can deal with some of the performance issues in the Switch port, it’s surprisingly suited to handheld play. Don’t think too hard about the game and just get lost in its naive juvenile delight.

Saints Row: The Third – The Full Package review copy provided by Deep Silver for the purposes of this review.