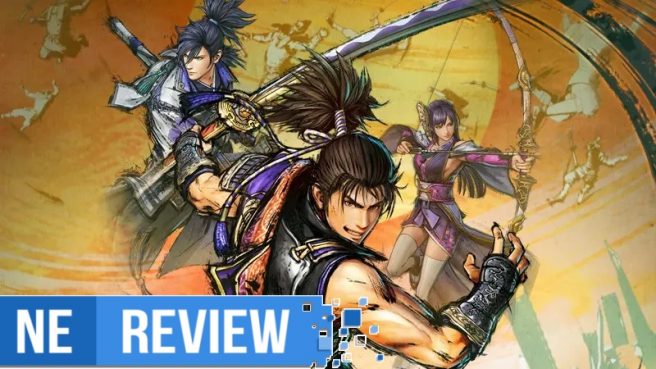 The Warriors-labeled series (also known as Musou) has gone in various directions both visually and mechanically. Being the sister title to the more famous Dynasty Warriors, it has been one such property that has also seen numbered entries, spinoffs, and crossovers. In the case of Samurai Warriors 5, this marks the first numbered game in seven years as well as a soft reboot of sorts with a new art direction and a wonderful streamlined system that makes it the most intuitive and accessible title in the series to date. And thanks to a slew of new features, it’s also one of the most enjoyable Musou experiences in quite some time on Switch.

Samurai Warriors 5 takes place in the Sengoku period of Japan, remaking and reimagining the first game that debuted back in 2004. You’ll first be shown a war that rages between prominent figures wanting to reign over the land. As the turbulent and tumultuous times continue to linger, through the perspective of Nobunaga Oda, players will go through the rise and fall of families, empires, and legendary warriors as they experience a period piece with a fresh makeover and immensely flashy combat.

Samurai Warriors 5 continues the trend of the Musou formula of being an over-the-top hack-and-slash title bolstering hundreds of enemies on screen at once with kill counts and combos going up well into the thousands from mission to mission. You’ll be simultaneously protecting, infiltrating, defending, and aiding people, castles, land, and more. What sets this title apart from others, however, is that the way the game progresses and is packaged between upgrades, characters, skills, and other elements feel like an amalgam of some of the best parts of various entries over the years and meshes them all into a new foundation that makes Samurai Warriors 5 feel like the definitive Musou experience. The story mode – labeled Musou mode – doesn’t necessarily do anything new, providing a linear though extremely fun progression as you go from each level and map making each playable character stronger and enhancing their skills through experience gains via combat and tasks completed on the battlefield. As is the norm, each battle gives a time limit of an hour, though this is more than enough whether you’re looking to just complete the battle or squeeze out every possible mission and objective each scenario has to offer. Doing so obviously will increase your ranking, experience, and items obtained, making it easier to progress not only through the game but for each individual character outside of combat. There are also a multitude of ways to gain levels and enhance weapons and skills through the My Castle portion of Samurai Warriors 5, which serves as a sort of management hub within each mode where you can equip, acquire, enhance, and do more to ensure consistent victory through strategic leveling and strength.

One of the bigger takeaways from Samurai Warriors 5 is that every character has flexibility in the way that they play, allowing for multiple weapons and skills to be used rather than preset or restricted functions. This sort of flexibility that gives each warrior the chance to use a variety of weapons (though not all) is a feature we’ve seen with the franchise previously, though it’s something that comes and goes. In Samurai Warriors 5, it is massively welcomed, however, as it gives more depth and breadth to the scale of the game from a mechanical standpoint. The flexibility between characters also makes it so you can have them be more palatable to your fighting style if there are certain weapons you’d prefer to use while in battle, but also comes with unique finishers for animations for each character and weapon. These finishers can also be interlocked with other characters out in the field with you that you can sometimes switch between depending on the scenario being played whether in Musou Mode or its Free Mode. The only real unfortunate aspect is that the way the spontaneous and overly annoying tutorials explain how some of the features work, the linked Ultimate attacks you would expect to be a big spectacle instead just involve a quick cut to the faces of the two samurai in battle before each individually performs their own animations tied to the weapons and skills they’re using as they cut through the hundreds of NPCs on the field. They also end up going their own separate directions, so it’s hard to tell if anything happened at all. It’s not as exciting as one would expect, though all of the skills you acquire across the nearly 40 playable characters between special attacks, musou attacks, and rage attacks are all extremely satisfying to pull off and look at as enemies fly into the air whether you’re using a katana, bow, spear, and many other weapon types. A simple press of the right bumper followed by a button prompt can initiate any number of moves depending on how you’ve set up the character you’re playing as, including buffs that increase attack power, defense, speed, and more for a short duration of time. Being able to do this with every character at the touch of a button makes it so it’s not entirely necessary to remember an inordinate amount of combo inputs just to not repeat the same moves over and over each time you come across a horde of enemies. It gives more variety and flavor to all of the characters and to the gameplay as a whole, though cooldowns can vary from skill to skill to keep things balanced and avoid spamming of the more massive attacks.

Another welcomed feature when not going through Musou or Free Mode is its Citadel Mode which serves as a fun tower defense portion of Samurai Warriors 5. This is a great way to be able to do some quick training for both your characters and your mounts that you’ll acquire through stables as increasing experience for both will obviously allow for more steam rolling. Citadel Mode is also hugely complementary to Musou mode, allowing you to further upgrade your characters and weapons, as well as increasing the relationships between them to unlock further scenes and bonds to ensure maximum upgrades. This is hugely beneficial as doing so is what can increase level caps on so many things, including the buildings themselves to give you even better items in the shop and other opportunities to continuously upgrade and optimize your loadouts.

What remains both a blessing and a curse for Samurai Warriors 5 is its new art direction has allowed it to have some of its best cutscenes yet, both prerendered and in-engine. While the Musou franchise has always had grand-scale fights, how it handles itself outside of these epic battles have always been less than thrilling, and I wish with the My Castle portion of Samurai Warriors 5 where you handle the Dojo, Blacksmith, Stables, and Shop within the game had more depth to it rather than being some menu. Having the ability to come back to even a small hub and handling your business while walking around your estate – however big or small it may be – and adding little things like decorations in addition to the usual upgrades and training would just keep things much more engaging, as once the battles themselves are over more often than not I tend to feel like the menus themselves – while extremely clean and intuitive – are just boring time wasters that would keep the overall experience more consistent if it was provided in a 3D spectrum. Omega Force and Koei Tecmo are no stranger to this sort of formula, with the likes of Dragon Quest Heroes, some Dynasty Warriors entries, and others having done this in the past, so it feels like a missed opportunity to not add that level of detail that itself could add another layer of gameplay, seamlessness, and immersion. The curses from this art direction come from the fact that even with its new supposedly less demanding style compared to the more realistic approach of prior titles, Switch still handles them in not the most optimal way. Loading of the levels and scenarios themselves are quick, but coming out of them and into other portions and modes of the game can take a noticeable amount of time, though still far from aggravating compared to other titles both in and out of the Musou series. Frames drop in the more action heavy scenes, and resolution compared to what Samurai Warriors 5 really hits with benchmarks on other platforms is a noticeable difference. Add that to egregious pop-in, jaggies on every possible object, and incredibly small text while in handheld mode, Samurai Warriors 5 is a big step forward for the series while still being inconsiderate for platform differences as a whole after prioritizing one in particular with so many entries. I understand Switch isn’t the powerhouse we’d all like or believe it to be, but many games have proved that optimization goes a long way to make just about anything possible with enough time, effort, and sincerity to the user base.

Samurai Warriors 5 as a whole is a solid package that sees a brand new light for the series and excites me for what’s to come next. It’s a familiar yet refreshing new entry thanks to a new streamlined interface and progression system that puts more focus on just having awesome battles than nonsensical upgrades and dismantling among thousands of weapons and characters. By comparison, Warriors Orochi 4 had 177 total characters and was just way too much to manage, choosing quantity over quality and providing a massive game that, while fun, was a big hollow bowl rather than a meaty dish. Samurai Warriors 5 condensing this down and feeling like weapon unlocks and the sort are a natural part of the progression rather than a bombardment for visual stimulation to cover up the lack of any real soul, and it’s massively appreciated alongside its cleanly and easy to read interfaces. The tutorials and random pop-ups in battle can become incredibly annoying after some time and almost feel endless, but at least by the end of it all you’ll walk away after 20+ hours feeling pleased, accomplished, and a proud warrior yourself.

Samurai Warriors 5 is both a familiar and refreshing new entry in the long-running Musou franchise and remains another stellar addition to the series. With a makeover that brings with it fleshed out cutscenes and a beautiful sumi ink aesthetic, it’s not only a joy to play with controls and features that make it the most accessible the series has seen to date, but feels like you’re also experiencing and watching a historical painting in motion. With nearly 40 characters to choose from, you’re able to play with some of your favorites in a whole new light with more streamlined and addicting upgrade features. Even with its linearity and repetition, Musou fans should already know what to expect, and it’s always a treat to see a period piece be represented in some fashion. The only real unfortunate part is that the Switch yet again gets another Warriors title that performs at a significant disadvantage compared to other platforms, leaving frames capping out at 30 (when it can reach them), and both resolution and visuals clearly taking a hit to accommodate for mobile hardware. Samurai Warriors 5 remains perfectly playable though, and those looking for another action-oriented title they can take on the go should be more than satisfied with this new entry in the Musou genre.