[Review] Scram Kitty and His Buddy on Rails

Posted on June 1, 2014 by Jack Johnson(@tupachologram96) in Features, Reviews, Wii U, Wii U eShop 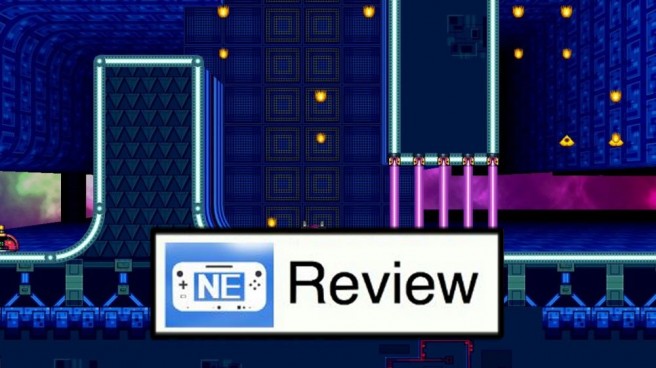 I hate it when people label things incorrectly. It makes me very sad and upset. I can’t tell you how much compound irritation I’ve had to repress when, say, someone would write the wrong name down on an online order at work and offer me the duty of rectifying the situation over the phone with Mrs. Jihnson and her missing mail-order appliance, or when a past roommate not-to-be-named would intentionally label the cat food ‘dog food’ just to try to make me sick the next day.

This is why I possess such a vitriol for relatively new Welsh developer Dakko Dakko and their latest attempt at capturing the burgeoning Wii U indie scene (think Mutant Mudds, Cloudberry Kingdom, and all of the other titles I’ve referenced way too much in writing and on the podcast), Scram Kitty and his Buddy on Rails, a 2D shooter with strong open-world platforming elements. The ‘On Rails’ signifier at the end there implies imprison-y, limited bounds and pointed, one-dimensional gameplay design, whereas Scram Kitty, in its comparative sense of freedom to the recent litany of top-notch platformers we’ve seen reach the eShop, feels anything but. Scram Kitty, though confusing in name, scratches an itch not satiated fully by its contemporaries on the platform. By not being as singularly masterful in its level design elements as, say, VVVVVV or Mighty Switch Force!, Scram Kitty feels a little less uptight and neo-retro, yet crucially still achieves the same level of “old-school hardcore” as those luminaries do. I will not use any cat puns in this review. 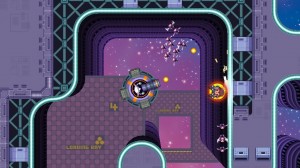 While the above introductory paragraph may have implied this as a game with a focus on level design, Scram Kitty should be largely judged upon its magnetic-based platforming and, chiefly, its incredible jumping mechanic, before anything else. Instead of travelling a land within the normal definitions of gravity, Scram Kitty involves the convex traversal between floating, magnetic shapes instead. This unorthodox setting this leads to a lot of constant wonderings about foundational movements otherwise considered implicit; would continuous jumping improve my covered ground on this bean-shaped object, or would simply control-sticking it out do a better job? Would adhering back and forth between these two nearby “asteroids” do a better job, or should I just control-stick it out? These fundamental upheavals do an excellent job of giving Scram Kitty a distinct undertone, shedding the slightly wack “trapped as a derivation of NES Mega Man” designation other recent shooter/platformers have had when nitpicked upon.

The physics surrounding Scram Kitty’s jumping ability, purportedly to have required around a year to program to completion, warrants the cliche “mediumly difficult to learn, hard to master” moniker. Double tapping the jump launches you– a cat-loving humanoid bent on rescuing spacebound kittens from the wretches of evil astronaut mice– into the an accelerated figure tied to the point of jump-origin, an ever-stretching radius with a hint of a bouncy feeling. Most sequences you’ll perform require utilizing this truly notable (even in the context of our day and age) vortex-y platforming function multiple times, and the few-and-far-between successful attempts you’ll execute, even by the end of the ~six hour, seventy-plus mission game, will largely be from muscle memory via level-specific identifications than long-tread schemas built after much experience. Be prepared to replay and be positively (in a good sense) frustrated by the bread and butter of the game, which Dakko Dakko has thankfully facilitated with its speedy respawn times. 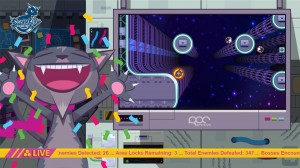 Level design, as stated above, is way more open and less pointed, directed, and “masterful” than what we’ve seen in recent similar titles; while one might consider this a knock at face value, consider it a breath of fresh air, rather. Each level (after the brief tutorial-less introductory period) is untimed and free-roaming, repeating the same four missions— “Get to the End of the Level”, “Collect All 100 Coins”, “Reach All of These Checkpoints in Time”, and “Defeat the Same Boss”— in an unflinching manner. Levels aren’t designed around a strong theme (a series of repeating hills requiring a precise action, for example, crescendoing in guile) so much as they are collections of small, interesting snippets of interesting geographical features. This “structure-less” design structure lets you find the patterns in the gameplay rather than having them identified and presented by the developer. This doesn’t inhibit the potential to execute jaw-dropping, intricate jumping sequences and typical heart-pounding shoot ‘em up feints to evade enemy fire. This philosophy, while providing Scram Kitty with a wonderful organic sense, is, of course, a double-edged sword; the game both lacks the developed shoot ‘em up presence only meticulous design can create and a sense of overarching dynamicism, ending rather abruptly and without a feeling of progression in difficulty nor intricacy.

The open-world platforming elements, surprisingly, also aid the somewhat lackluster aesthetic table-bringings as well. The levels themselves, largely lacking in visual distinction from area to area, did find a way to become memorable due to the conflating factors of repeated level-playings (due to you screwing up a vortex-jump at the end of a particular checkpoint mission run) and its organic stylings, despite run-of-the-mill neon courses backed by a slightly generic electronic score. 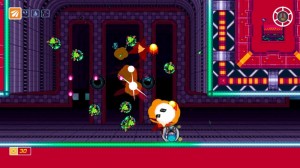 Scram Kitty, despite what should be a universally-adored kitten theme, will only appeal to a certain “hardcore” audience due to its reliance on its fairly obtuse, yet entirely fair jumping mechanic and prevailing shoot ’em up elements. Its notability and efficacies in both said jumping ability and its unique foundational traversal, along with its sufficient length, should be enough to cause warrant for a purchase from most members of the aforementioned audience. Though its lack of pointedness in design, though inducing freshness upon a genre somewhat maligned by “forced movement” level design, may mean long-term comparative disadvantages in the eShop marketplace, Scram Kitty’s sheer uniqueness in gameplay should provide enough ammo to continue the discussion of its place in the indie hierarchy for months to come.

While it probably won’t go down as one of my absolute favorites as the eShop’s library gets further fleshed, I still really appreciate Scram Kitty’s, to quote Bogost, “unflappable nonchalance” amidst a sea of refined level design structure. The heights of its truly excellent vortex jump still feel like they haven’t been reached. Buy, with confidence, Scram Kitty if you’re in the mood for an authentic old school shoot ‘em up experience; don’t buy Scram Kitty if you possess low diligence.

More: highlight, review, Scram Kitty and his Buddy on Rails, Wii U eShop