Posted on June 22, 2020 by Jakob Vujovic(@jakovujo) in Reviews, Switch 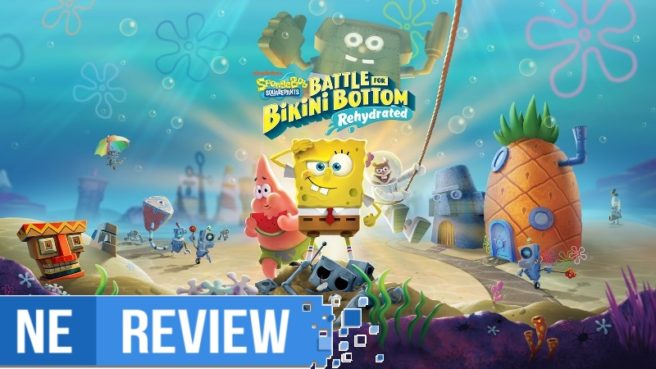 SpongeBob SquarePants: Battle for Bikini Bottom would seem like an unlikely candidate for a remastering (or a rehydration) considering that – to the credit of the original – it’s merely an above average licensed 3D platformer of the GameCube generation. These games have almost completely vanished, but for its time these games were everywhere. I have an especially vague sense of nostalgia with this game: I actually can’t remember if I played Battle for Bikini Bottom specifically or if it was any of the other countless similar SpongeBob games that were released in the half decade following it. To further complicate this nostalgia, Battle for Bikini Bottom doesn’t just evoke the other SpongeBob games of its generation, but games like the now-forgotten Tak and the Power of Juju (which, as an aside, one might say was a trailblazer in the modern video-game-to-failed-TV-series pipeline.) Put aside the modern visual overhaul of Rehydrated in the Unreal Engine, which is competent but less than optimal on the Switch, and the game seems frozen in time. Rehydrated still feels like a game from 2003, but with the relative rarity of its kind in 2020, it’s hardly worse for it.

Spongebob: Battle for Bikini Bottom – Rehydrated is structured in a Mario 64 style, with a very basic hub world that connects to the games levels, fashioned after iconic locales from the early seasons of SpongeBob – from Jellyfish Fields, Goo Lagoon, the Kelp Forest, and Rock Bottom, among others. You collect golden spatulas, this game’s power stars or jiggies, as well as “shiny objects,” effectively a currency for opening alternate paths and buying more golden spatulas. In terms of story, the SpongeBob license is just as well treated as it was in the original. The plot and jokes could never be as tightly woven as an episode of the show, but it hits the appropriate kid-friendly crass tone, and the plot is suitably aware of its video game induced contrivances. The characters you’d want to see are here and voiced by their original actors, with a few notable exceptions like Mr. Krabs and Mermaid Man. One benefit of the game’s age – it was originally released only four years after the TV show first aired – is that its source material is limited to the best and earliest of the cartoon. It doesn’t have to deal with the interminable continuation of the SpongeBob franchise, which I haven’t kept up with. I checked out somewhere around 2006. The game’s limit to early SpongeBob only contributes to its general nostalgic aura, which you’ll probably only feel if, like me, you’re in your 20’s, the target market that a remaster like this seems to be after. 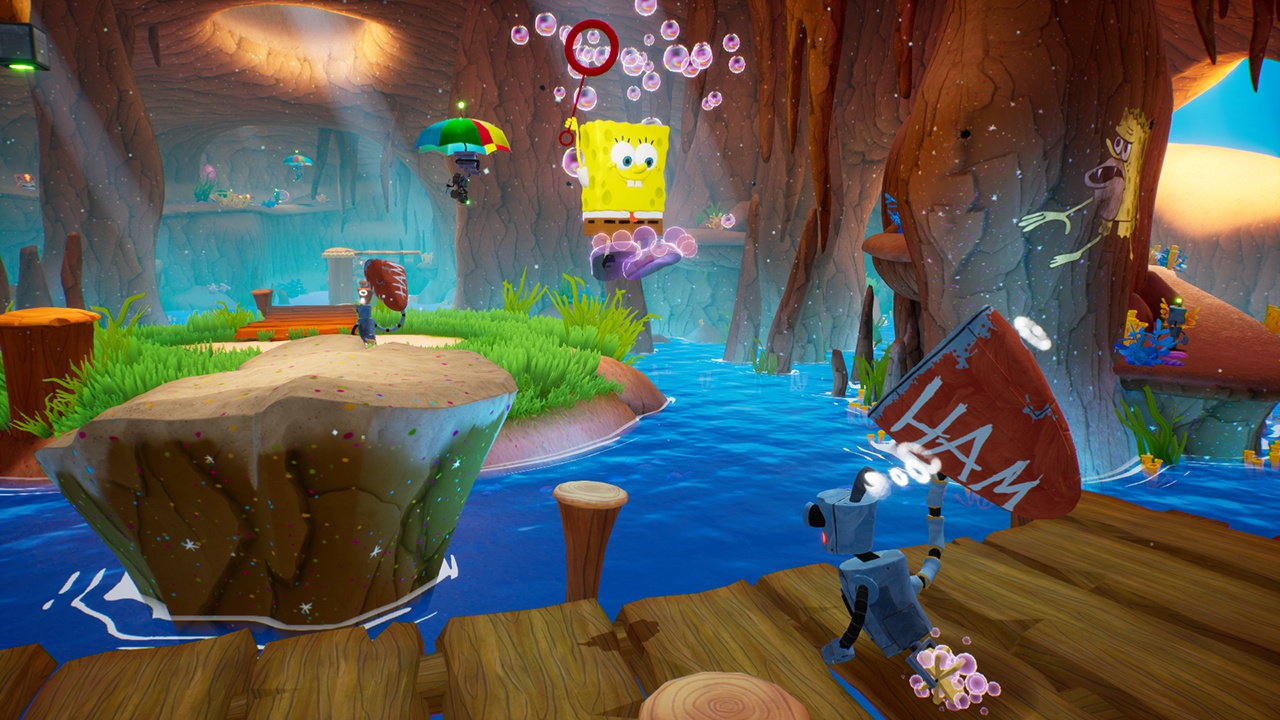 The hazy nostalgia can start to clear at points when actually playing the game; as I said, it still feels like an (above average) licensed game from 2003. Don’t expect SpongeBob – or the playable Patrick and Sandy, who have marginally different abilities – to control with the highly polished agility of a premier mascot platformer. SpongeBob always runs slightly slower than I’d like, and his moveset is often more restrictive than the level design would imply. A basic low-momentum double jump is about as exciting as it gets with SpongeBob or Patrick. Sandy’s lasso lets her helicopter float on descent, which brings a nice change of pace and offers a greater sense of freedom. Most other abilities are context sensitive, including wall jumping, which removes most of the challenge that could come from the platforming itself. Character movement could be compared to Crash Bandicoot (low momentum, stiff, but precise) whereas levels are designed with a degree of openness that makes it feel like you should be able to do skillful Mario-style acrobatics to find secrets. But you can’t.

What this means is that the game isn’t very challenging. To be fair, most 3D platformers aren’t challenging if you just want to see the end credits. The real distinction that we could make between the best 3D platformers and those that are average is that, with its limited movement, this example of an average platformer doesn’t let you make your own challenge. Once you accept this then the game is a perfectly pleasant, if not a particularly memorable experience.

This particular game has an ardent fan base who I may have upset with my tepid praise. For these fans, this remaster restores content that was cut from the original. As someone with only vague memories of the original, I can’t speak to what exactly has been restored (aside from known quantities like Squidward Tentacles) and what kinds of tricks and exploits have been changed or preserved in this version. In these situations, the best praise I can give is to say that nothing feels out of place. If I didn’t know any better I would have assumed everything here was in the original; nothing that was inserted back into the game feels uncomfortably wedged. 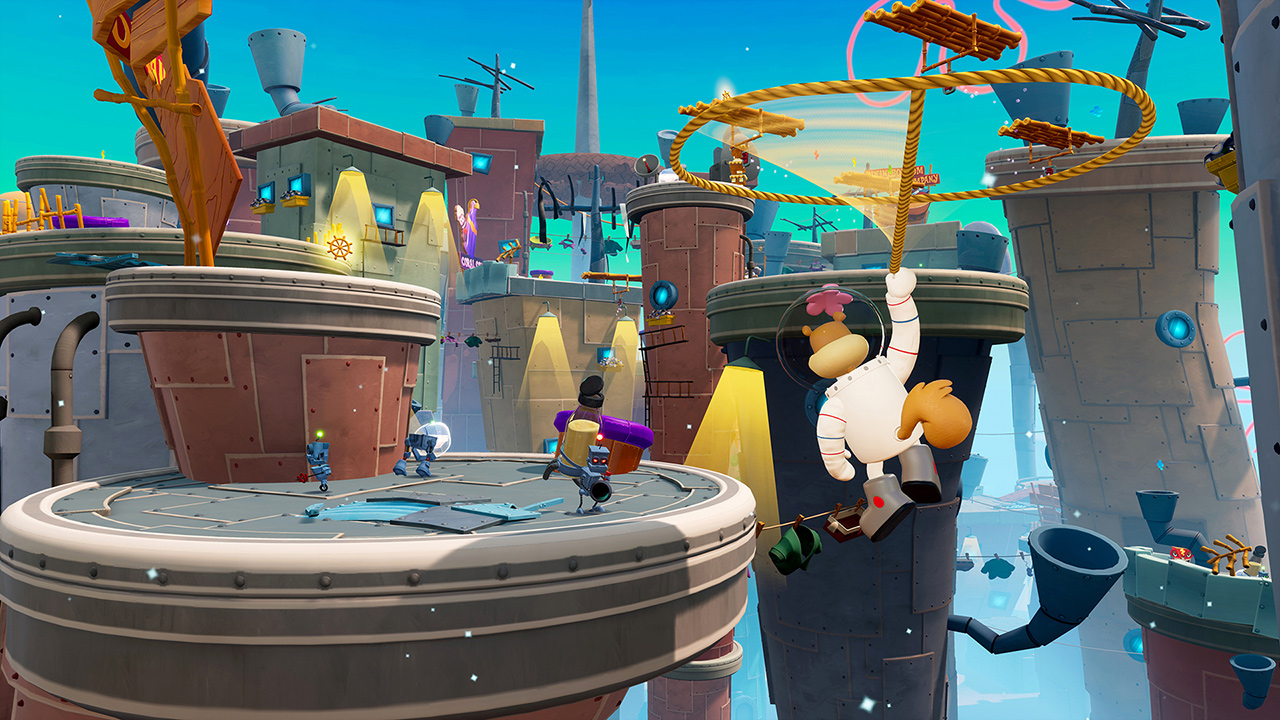 The Switch port of Rehydrated is a mixed experience. The overhauled models and textures are here. Character models do look significantly better than the original, which suffered from awkward shading that you’d see of other 2D cartoon characters adapted into 3D of the time. Everyone looked comparable to the infamous Homer 3D gag on The Simpsons. There was no cell shading or clean cartoony outlines on characters in the original, just weird smooth gouraud shading. Compared to the cartoon, the original graphics were like seeing a celebrity without makeup. The art style has been overhauled into something closer to the current corporate sanctioned 3D interpretation of SpongeBob. I take no issue with it, even though I find the original charmingly of its time. Its particular brand of 3D uncanny ugliness can be endearing. Environmental shadows, grass, and other adornments have been added, although they pop in very close to the camera on Switch. Handheld mode runs below native resolution, but it’s not egregious.

The big problem with the Switch version in particular is its frame rate. The original game ran at 60 frames per second, but the Switch version rarely ever hits this target except in very small environments. Most of the time the game fluctuates somewhere between 30 and 60, with occasional moments of severe slowdown when there are a lot of “shiny objects” on screen. These tend to pass quickly, but they are notable. I got used to the fluctuating frame rate, and the game is very playable on Switch, but considering the performance of the original and the fact that the game would look a lot smoother if they just locked the frame rate down to 30, the technical hiccups of this port cover over most of its original 2003 budget bin jank.

If you’re part of this game’s dedicated fan base, then you don’t need a stranger’s recommendation. The only meaningful advice I can give is that unless you really want to play Spongebob: Battle for Bikini Bottom – Rehydrated in handheld mode, you’ll probably be better served with it on more powerful platforms that can run the game at the consistent 60 frames per second of the original. It’s perfectly playable on Switch, but it’s clearly not ideal. As a 3D platformer, I can only offer tepid praise; the game is enjoyable enough, but if not for the SpongeBob trappings and its nostalgic evocation of 2003-era licensed games that weren’t bad, it’s not particularly memorable. It’s still not bad.