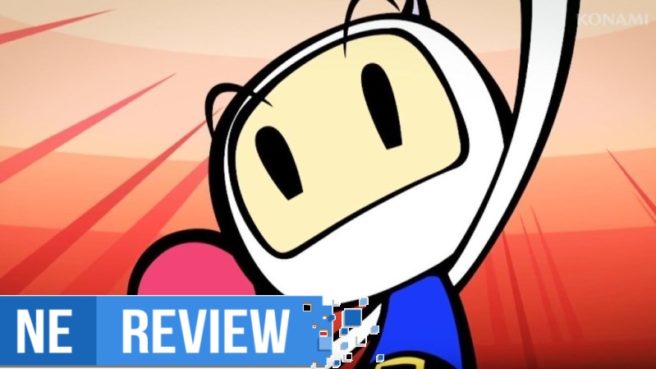 Super Bomberman R sees the return of a series that’s been dormant for nearly a decade, this time returning exclusively on Switch. Bomberman has a long and illustrious history thanks to its simple gameplay and arcade-like presentation that makes it easy for anyone to jump in at any time and have fun, regardless of skill level or familiarity with the series or the medium in general. Super Bomberman R, however, for all its worth lacks quite a bit for its price of entry, and while the fun and arcade feeling is still there, don’t expect to feel fulfilled by the end of it all – especially if you’re playing solo.

Super Bomberman R introduces you to a clean menu that gets straight to the point, offering a Story Mode, Battle Mode, Shop, and Options. It’s bare-bones, but it works for what it’s trying to accomplish. The presentation of the entire game feels modern, wasting no time with overwhelming text and taking you directly to where you need to go depending on what you’re in the mood for.

Story Mode offers a quick, cute, and fun experience, introducing you to all the different Bombers with their crazy personalities and dilemma they face within it. The art style and presentation of Super Bomberman R’s Story Mode is welcoming and colorful, popping both on your television screen as well as handheld mode for the Switch. It has a Powerpuff Girls-like aesthetic that felt both nostalgic and contemporary, while remaining true to Bomberman fashion. The cut-scenes are minimal and short, but remain cute and to-the-point. Besides that, however, Story Mode doesn’t give much in the way of content, and can get repetitive incredibly fast. You’re given five worlds to go through with a boss at the end of each world that isn’t particularly difficult, just tedious due to the odd control scheme of the game. 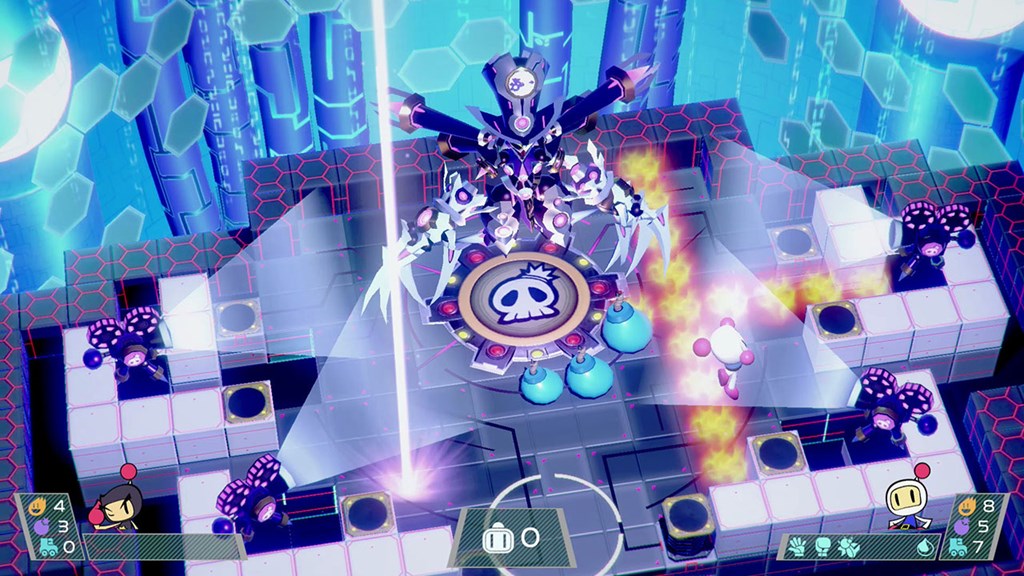 While the controls themselves are simplistic and intuitive such as ‘A’ to drop bombs and the analog stick or directional buttons for movement, the nature of the way the levels are designed don’t exactly work to the benefit of the characters thanks to the free-form movement, rather than being a little more grid-locked like some of its past titles. Sometimes you’ll find yourself in a corner you didn’t mean to get into due to lag or odd input reactions when traversing the maps, and then ultimately lose a life thanks to a bomb placed in an odd position.

Within each world are the same enemies and objectives needed to clear them: either defeat all enemies, find keys, activate switches, or collect random items. This gets old very quickly, and the maps sometimes feel uninspired or recycled regardless of what “World” you’re going into. The Story Mode is as bare as it gets, making the entire mode able to be completed at around 2 hours, give or take, depending on your proficiency.

Battle Mode is more than likely where most people will find themselves, but even that won’t give you much bang for your buck. The mode offers very little in the way of content, and simply puts you in local multiplayer using the same screen, or up to eight other Switch devices.

The online mode is where I found myself playing a decent amount of time on, but I also found myself getting incredibly frustrated due to the poor net code of the game. I tried multiple different Wi-Fi connections across various locations, both in 2.4gHz and 5gHz, and no matter where I was, the lag was immense. If you can somehow find a stable connection, you may enjoy trying to out-smart your opponent and bombing them up to the three times for the victory, but otherwise online is more often than not going to be unplayable thanks to poor net-code and the choice of peer-to-peer rather than a dedicated server. More often than not, even if you have a great and stable internet connection, you’ll be paired with someone who probably gets a 3MB download speed and 0.5 upload, or someone who decides it’s imperative that they have Netflix running in the background. This kind of online infrastructure for multiplayer games can get frustrating, and with the lack of real rewards and slowness of pairing and getting through games, the incentive is long gone. 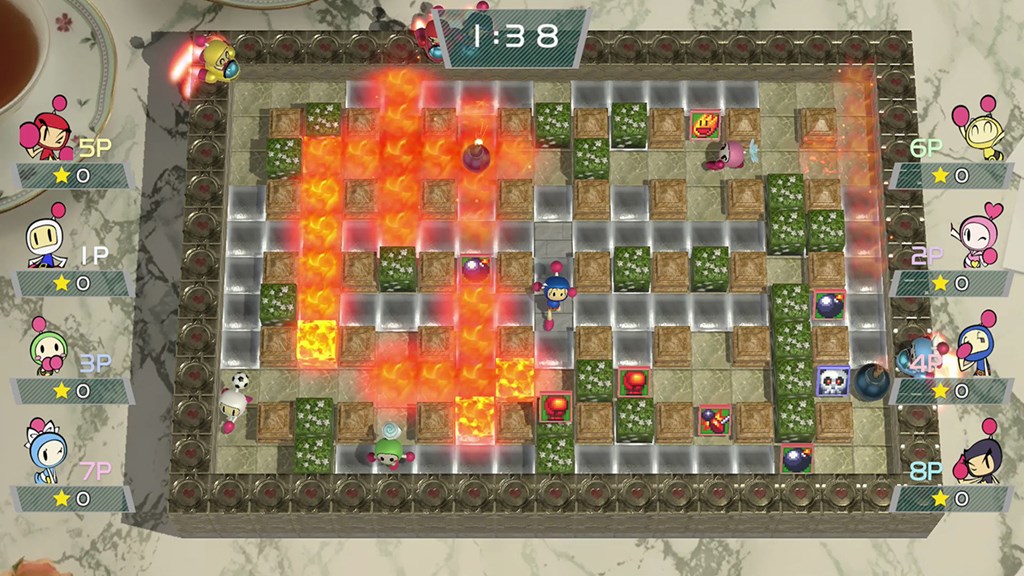 At most, it seems Super Bomberman R was initially planned as a mobile game, thanks to its shallow gameplay and inclusion of a shop that’s set up as if it was ready for microtransactions. There are none in the game, but the coins and presentation used to give extra accessories to your bombers compared to the extremely low rate in which you get rewarded with coins feels like a “grind and beat daily quests or pay real money for gems” sort of approach. The shop is practically Super Bomberman Pachinko.

For $50, you’re not getting much out of the box. In fact, you barely get anything at all. The graphics are pretty and the art direction is nice, but ultimately this feels like this should have been a cheaper digital-only title – assuming Konami didn’t want to go the free-to-play mobile route – that got hit with a premium price tag thanks to it’s exclusivity on a brand new console and tugging on people’s nostalgia on top of this being the first Bomberman game in nearly a decade.

Without the touch of Hudson Soft, the game has lost its charm and appeal that kept it going strong for so long. It’s not a bad game by any means, far from it in fact, but it’s not a particularly good one either. It’s unfulfilling, and unless you’re getting this mainly for huge get-togethers and parties, there’s no real reason why you should invest time in something so mundane, especially if you’ll only be playing alone.

The Switch exclusive Super Bomberman R provides a brand new look to the long-running Bomberman series that’s been played around the world across many generations, but falls short of providing players and fans of the IP the achievements and satisfaction of past installments. While the art direction is a breath of fresh air and rather pretty to look at, the gameplay is lacking in any real excitement that gives players a reason to keep moving forward, both in Story Mode and Battle Mode. The music is catchy and the arcade feeling of the series is still very much there and in-tact, but the soul and charm of what has made Bomberman so great over the years just isn’t present in Super Bomberman R. The game provides a rather fun multiplayer experience when lots and lots of people are involved, but ultimately this would have been better as a digital-only title for a much lesser price instead of paying premium for a game that feels extremely shallow and may disappoint many consumers in the long run.

Copy of Super Bomberman R provided by Konami for purposes of this review.