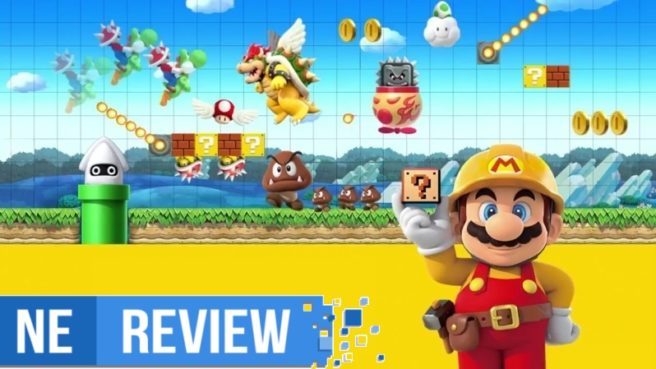 Last September Nintendo graced us with a Mario fan’s dream when Super Mario Maker released for the Wii U. It gave veterans, newcomers, and creatives alike the power to build Mario levels at their own accord and release their inner Shigeru Miyamoto, as well as play brand new courses designed directly by Nintendo and gamers from around the world. Now the 3DS version of the game – revealed just a few months ago during a Nintendo Direct – is here for all to experience, and while it is identical in many ways, there are some things that differentiate it from its home console counterpart that alter the experience, for better or for worse.

Almost everything from the Wii U version of Super Mario Maker is still here, such as Recommended Courses and the ability to create levels at your leisure – among many other elements – but some things stand out immediately after booting up the game. For some odd reason, it takes an upwards of five minutes creating save data and extra save data upon launching. While it isn’t new to see games automatically create saves upon beginning, especially those that autosave, after 30 seconds or so of waiting at this screen seeing Yamamura (one of game’s two teachers) casually peck away at random walnuts, I realized I was waiting a lot longer than usual. I began to time it, and nearly five minutes later (this is not a hyperbole) I was finally able to start. 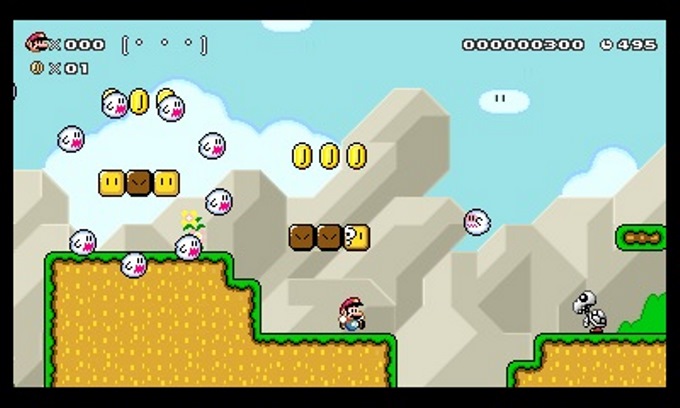 If you haven’t played the original Wii U version, Super Mario Maker for Nintendo 3DS will start you off with some basic tutorials on how to make courses before you’re able to jump in on your own. After a point, however, you’ll be able to choose whether or not you’d like to keep continuing with the lessons or go ahead and start creating on your own. Wii U owners will have an advantage and can just start building levels right away, but for those playing for the first time, Mary-O and Yamamura will thoroughly walk you through all the tools you need and how to use them in an intuitive and concise manner to get you making the levels of your dreams in no time. You don’t start off with much, but you’ll get more over time as you finish levels in the new Super Mario Challenge mode by completing courses, achieving assigned goals within each level, and finishing worlds. This is slightly different from the Wii U version where you’d get more assets by logging in consecutively as well as designing courses on your own.

While it’s great obtaining assets to use throughout the Mario games and its various styles available in Super Mario Maker, such as New Super Mario Bros., Super Mario World, Super Mario Bros. 3 and the original Super Mario Bros., the lack of online comes to bite once again while creating courses. The ability to share the levels you’ve spent a long time making on Wii U meant something through the feedback you’d get via favorites plus Miiverse posts and responses. This was a way to improve on your current design or simply see people’s thoughts, often hilarious on the more goofy courses.

As someone who’s been playing Mario for as long as he’s been able to hold a controller, being able to relate to those experiences with other people through course sharing and seeing what their vision could be if they made a Mario title of their own was a sight to behold. With this function lost, once again, the spark and drive and wanting to “Create and Share” as the game likes to mention so much feels ultimately pointless and unrewarding, especially for those that may not live in populated areas or have friends with a 3DS or an interest in Mario, as sharing can only be done locally. The asking price of a standard 3DS title is a big investment for a lot of people, and not being able to play with your friends unless next to each other could ruin the experience for some, especially when now, more than ever, we tend to be busier than we’d like to be and may not have as much time as we’d like for video games, whether at home or on the go. A slightly lower price point I believe would be much more forgivable for a title that ended up losing the most precious quality from its Wii U counterpart. 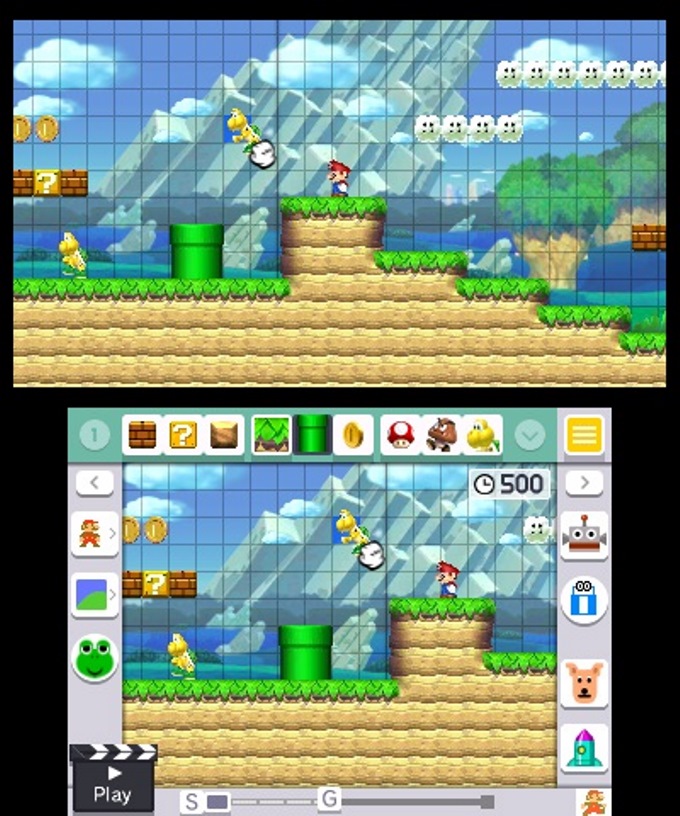 Aside from the lack of online sharing functionality, Super Mario Maker for Nintendo 3DS is missing a few other features from the original Wii U release. Nintendo has ditched amiibo support, meaning the Mystery Mushroom costumes are a thing of the past. Wii U courses created with these outfits are not compatible with the new 3DS edition. Event Courses have also been removed along with the ability to find and play specific courses online.

One of the oddest things you’ll encounter in Super Mario Maker for Nintendo 3DS is that whenever you’re playing through a level or in course creation mode, for whatever reason, the game is actually set to a smaller resolution and doesn’t immediately stretch to the dimensions of the 3DS. Black bars surround every kind of Super Mario Bros. style. This can be problematic for those with the standard 3DS models as what’s shown on screen will end up being smaller than what the already small screen provides. One would imagine this was done to make the games set in “pixel perfect” mode, but given that the Wii U version fit on every TV I’ve played it on without issue, I’m not exactly sure why Nintendo opted for doing this on an already poor resolution. Was setting it to a sub-native resolution easier for porting purposes? Who knows. Menus, settings, and basically anything that isn’t the gameplay itself actually stretches to the screen’s size without fault, though.

If you are thinking about getting Super Mario Maker for Nintendo 3DS and do plan on playing with others locally but only want to use one copy, be wary that it’s not possible. Friends will need their own game and system to collaborate locally. Inserting the cartridge into another 3DS will delete all save data, so any progress or courses you may have made will be completely wiped – it’s another odd design choice that I don’t quite fully grasp. Without the ability to upload courses online in the 3DS version of the game, I’m not sure what Nintendo was afraid of. No information whatsoever could potentially be stolen. 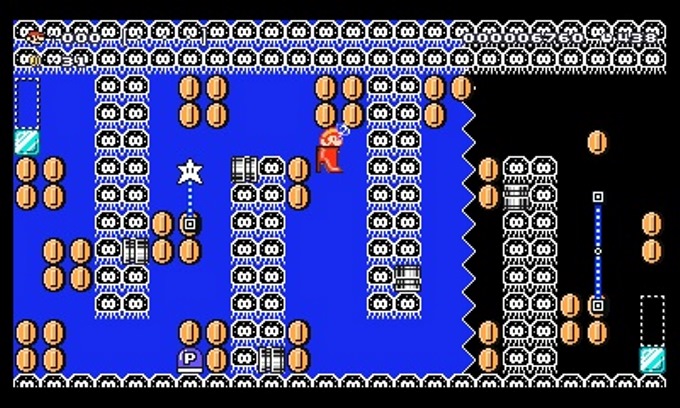 For all the faults Super Mario Maker for Nintendo 3DS has compared to the Wii U version released last year, if anything, look at it as a new-ish Mario game that brings you over 100 unique courses (some classics remixed as well) designed directly by Nintendo, along with an ample supply of content brought over from the Wii U version of the game. Add the ability to create your own levels, and you have another fun Mario game to jump into, but if you own or have played the Wii U version of the game that released in 2015, there’s really not much to look forward to. Super Mario Maker for Nintendo 3DS is strictly for those that don’t own a Wii U to bring out their inner game designer, even if you might be the only one who can enjoy and play the courses you make.

Super Mario Maker for Nintendo 3DS delivers all of the fun and creativity we got out of the Wii U version, even with its missing online sharing features. While the core sharing functionality may be gone, the 3DS version still has a long life ahead of it as you’ll constantly be receiving new levels to play via Recommended Courses and 100 Mario Challenge, so long as people on the Wii U version are creating and uploading compatible levels. It’s unfortunate, however, and overlooked, how important the online features were to Super Mario Maker. The inability to upload and share your own creations on the 3DS through the internet hinders the experience and makes level creating feel almost like a chore and gives a lack of incentive to do so with no ability to gain feedback from other players around the world. Unless you StreetPass often or have friends that own the game, making levels ultimately feels pointless and unrewarding.

Having gone through the Wii U version extensively, it didn’t hit me until playing the 3DS version just how important these online features were. This was a way to collaborate with others and ultimately design the best courses you can possibly make. As an artist myself, there’s always a sense of curiosity and wonderment for the things you make and how they resonate with others that interact with it, so being unable to do so in Super Mario Maker for Nintendo 3DS really feels like a punch to the creative gut as you’re shelled off from the world. While I believe art should be selfish and represent you at your core, being able to give it wings and send it off to the masses is just as exhilarating, and it really is sad that the loss of one component that was part of an amazing game – a game that is still practically identical in its 3DS counterpart – can make it hard to recommend for those that own or have played the Wii U version.