[Review] The Cruel King and the Great Hero 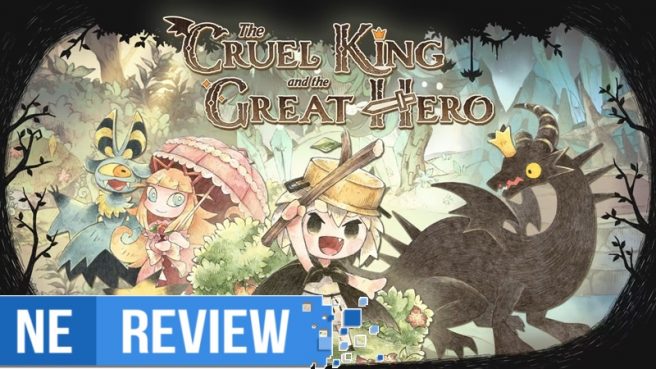 Long ago, a heroic man had a great battle with the tyrannical dragon king – but rather than slay his foe, the hero found a way to sever the demonic energy corrupting the king, allowing him to live on. Now kind and just, the dragon king watches over the hero’s daughter, raising her on stories of her father’s conquests and supporting her dream of becoming a great hero one day, herself. What adventures await little Yuu?

A brave and kind child, Yuu wants more than anything to become a renowned and great hero. Training on the mountain top with her trusty branch, she starts to defeat bad monsters to build up her strength. This training regimen intensifies one day, when Yuu decides to descend the mountain on her own. The Dragon King agrees to her request, but watches from the branches of the forest to keep Yuu from any real harm. With her first real adventure under way, Yuu decides that she must do what good she can, knowing that at her current size and strength that she’s not quite ready to be a real Hero just yet, she does know that making the best of her time to train means helping others with errands and small tasks – these acts of kindness will pave the way for Yuu to grow into her Hero boots, after all. 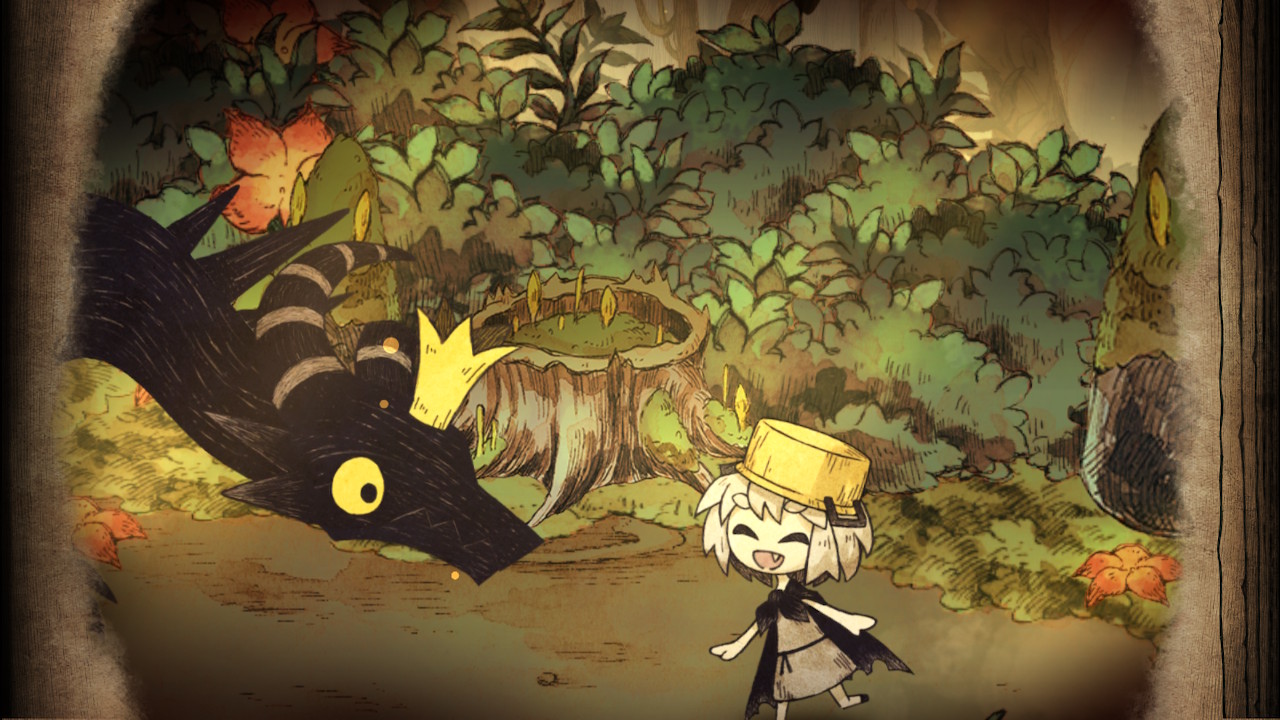 The Cruel King and the Great Hero is a simplistic RPG, one where navigation is done through side-scrolling areas, not unlike a Metroidvania style map, but with a lot less puzzles and enemies on your tail. Exploration is limited, with branching paths here and there, and while exploring can deliver great rewards, sometimes chests can’t be reached until certain party members are in the team, or other objectives have to be met first. While this does make coming back to older areas rewarding, it is easy to forget where something is. Luckily, the player’s map will mark where treasures are so that finding them later is a breeze.

The map is also helpful at illustrating where objectives are, allowing the player to either gun straight for story progression, or even tackle the myriad side quests that the game throws at you every chapter. Side quests are very rewarding, and though there is usually a fair amount of back tracking involved it is usually 100% worth the player’s time to complete them. Currency, accessories, and items can be earned by helping out the villagers, and a lot of the time the items received will complement the player’s next journey into the unknown – for example, in the early beginnings of the game, a quest will reward the player with a pendant that prevents the Chill effect when equipped. This can be earned right before the player is to traverse a tall mountain area in the midst of blizzard-like conditions, with monsters that have frosty abilities that can stop the party from acting in battle. 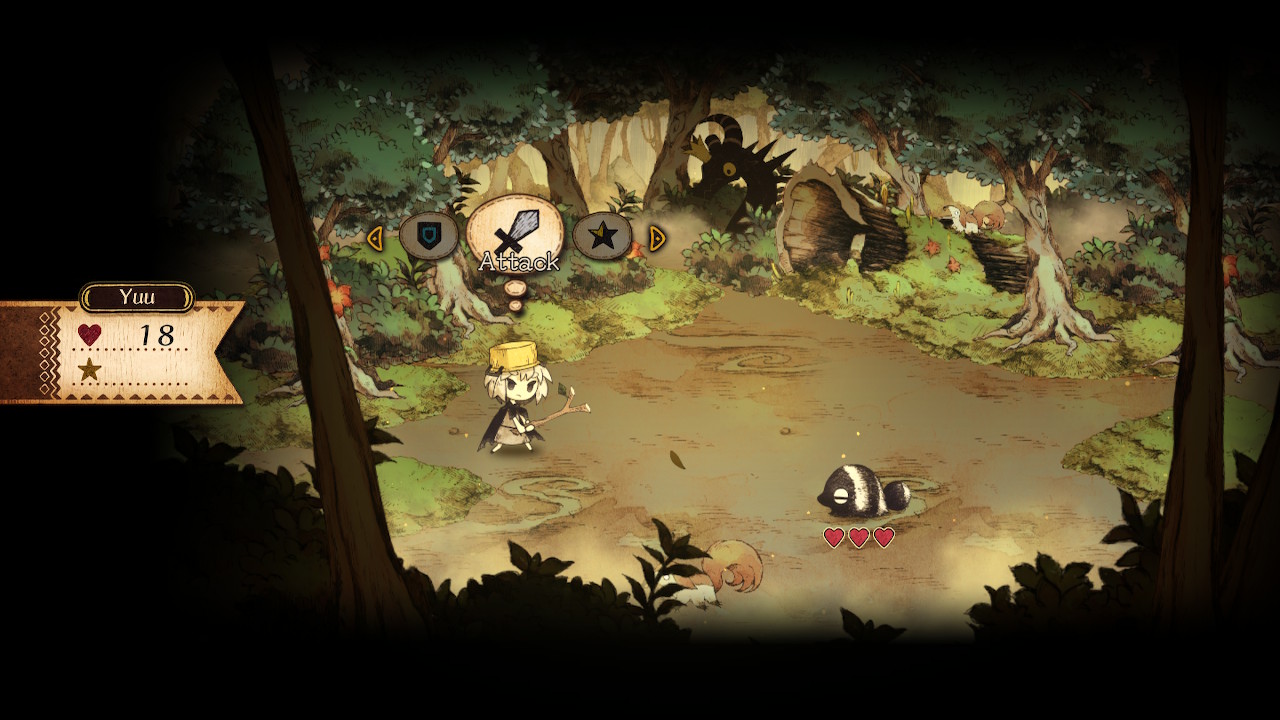 As in many RPGs, combat is done through turn-based ability selection. A regular attack will do damage to enemies, and when their hearts run out, they are defeated. As Yuu defeats more and more enemies, she grows stronger from the battle experience. Each level up increases her stats, like attack, defense, and skill points. Skills are learned by the party gradually through leveling up. The first skill Yuu acquires is a flaming sword attack – unbeknownst to Yuu, the power of fire granted to her weapon is a bit of the Dragon King’s own fire breath. Other special moves will allow Yuu to scout enemies, or hit first in battle. Other characters met along the way will have their own learned abilities, as well. Though most party members are temporary members through a chapter or two of Yuu’s journey, making the best use of their abilities will change the flow of battle.

Enemies will also have abilities of their own, some allowing multiple hits during an attack, or the affliction of a status condition, like the chill effect, or poison. Accessories that the party can equip can nullify these effects, or the player can opt to use their accessory slots to augment stats instead, making their party members faster in battle or hitting a little harder on every attack by adding to their strength score. Making sure to check equipment and upgrade it often can really help with hitting for more on every attack, and taking less damage from each enemy hit. Equipment can be found in chests around the world, or even bought at the shop in the monster village. 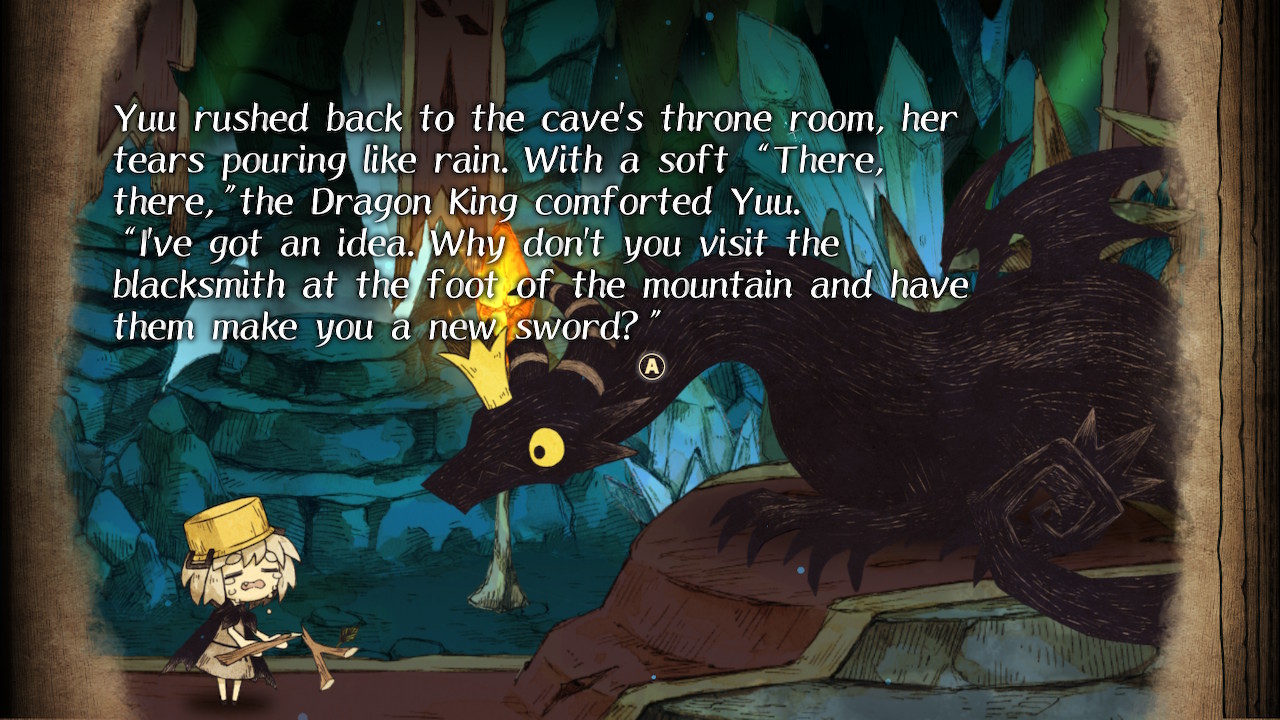 The real journey begins when Yuu’s trusty branch gives out on a particularly strong boulder. The King decides that Yuu should attempt to get a new sword made, and thus Yuu’s resolve to help others begins to burn strong within her. The story’s progress is mostly made in adorably animated cut scenes. Everything in The Cruel King and the Great Hero is told through a storybook lens – battles even open with a transition that shows the turning of pages. The lightheartedness of the story, the cute presentation, and the innocence of the protagonist make for a wonderful first introduction to RPG games, especially for younger players. Older players that want a relaxing and heartfelt journey also will find a lot of enjoyment in the smooth battles and Yuu’s resolve to go out and do good in the world, just like her father.

The Cruel King and the Great Hero doesn’t break from the turn-based RPG mold, but is a tried and true testament to the timelessness of the genre. Taking a proven formula and telling a tale of magic and swords and sorcery may not be a cutting-edge experience, but feels more like a hearty bowl of chicken soup comforting you on a cold day. The game’s difficulty starts very low, but will ramp up as the story progresses to something that will keep a player busy, but won’t overwhelm them. While the lack of complexity may bore players of action titles (there is a lot of waiting for inputs and abilities to resolve in turn-based game play) this is an example of “old reliable” coming back to us for another round.

The Cruel King and the Great Hero may not appeal to the average core gamer, but for anyone that wants a beautifully-illustrated and interactive fairy tale, this will scratch the itch rather well. A very approachable formula makes for a title that even younger players can enjoy with ease, and the presentation of the story in its whimsical book format will make for an engaging read-along experience for parents of young players. RPG fans will feel right at home with the tried-and-true turn based combat, and the engaging story following our strong lead will capture hearts immediately. I suggest settling in for this game with a hot beverage before bed, and not to be alarmed if your dreams become full of dragons.

Cruel King and the Great Hero copy provided by the publisher for the purposes of this review.