Posted on September 11, 2014 by Vincent Ward in 3DS, Features, Reviews 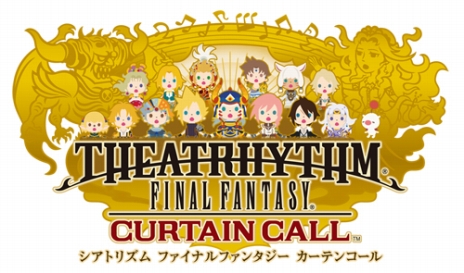 Back in 2012, Square Enix took it upon themselves to celebrate the Final Fantasy’s 25th anniversary by creating a rhythm-based game that involves some of the best soundtracks in gaming. That game was the 3DS title Theatrhythm Final Fantasy, which was incredibly well-received and praised. Two years have passed, and now Square is at it again with Theatrhythm Final Fantasy: Curtain Call – another take on the rhythm based series. Featuring new music, updated visuals, and new gameplay modes, does this game offer enough to be on par with the rest of the franchise? Ir is this game a fantasy gone wrong? 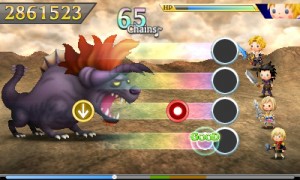 As much as this is a rhythm game, Curtain Call doesn’t stray far from typical Final Fantasy battles

Collectively featuring over 200 songs from the ever so popular Final Fantasy VII all the way to lesser known titles such as Final Fantasy: Battle Quest, Theatrhythm Final Fantasy: Curtain Call attempts to combine all the best music selections from all ends of the series. These songs will make you reminisce on the good times you spent in these worlds with characters you came to love, invoking you to smile like an idiot as you watch those same characters run through worlds of the series’ past. It truly does feel like this game was made by fans who love the series just as much as the ones who’ve been playing it for countless hours.

Thankfully, these developers knew more than just how to tug at the heartstrings of the fans, because not only is this game a love letter to all things Final Fantasy, it’s also an exceptional rhythm game that deserves just as much attention as the fan service.

Amongst the different modes and songs in this game are three core ways to play. Battle Music Stages, which have all four of your selected characters lined down the screen as a barrage of notes begin flying down their lane, is one option. If you hit every note correctly to the tune, you’ll be rewarded with an attack in which you deploy at the enemy awaiting you at the other side. You’ll want to hit every note as well as you can in order to defeat more enemies and watch your score rise. Another way to play is through Field Music Stages, which are slowed down, but involve more precision as they have you dragging your stylus around the screen to follow the notes and get your character from one end of the stage to the other as fast as you can. Finally, although you won’t be seeing as much of these, are the Event Music Stages that feature songs played over iconic cut-scenes from Final Fantasy’s past. These will bring about the most nostalgia for obvious reasons with gameplay kept in line with the other modes. They are a fun little way to change up the mix of the traditionally “chibi” and cutesy art style the rest of the game offers while still feeling like an important piece to the overall experience.

The art style also helps in bringing the environments to life as every song provides its own unique background to traverse and battle your way through. Although some may look a bit bland, most have taken assets from previous titles and designed them in a way where even the most intricately designed landscapes fit right in with all of your chibi characters. 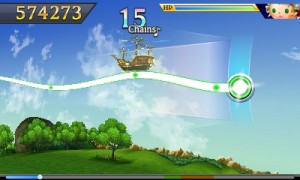 Now, you can pick and play any song your heart desires in the “Music Stages” mode, or you can go for the RPG-esque “Quest Medleys”, where you tackle quests and even defeat bosses in order to earn rewards such as leveling up your party or even unlocking characters. This is a great mode for fans who have time to kill and are looking for a rewarding and fun experience. If you’d like to take it a step further, after you level up your characters far enough, you will unlock CP points that can be used to equip skills. These skills won’t change the game drastically (like slowing down the pace or making the notes easier to hit), but what they will do is upgrade your characters in areas you believe are necessary. Cloud’s not hitting those enemies hard enough? Equip the skill Sacrifice that lowers your overall health in order to boost his attack stat. While this feature isn’t going to have you investing hours upon hours improving your character and seeing what skill works best, it is a great alternative to the otherwise simplistic gameplay that goes a long way in making every character you collect feel that much more different.

Once you feel that you’ve gone questing with your party enough to create a killer group, you can hit up “Versus Mode” to take on friends from around the world to see who has the best rhythm-tapping skills. As soon as you start a match with a friend or someone from across the world, it’ll seem pretty normal – that is, until you or your opponent gets a high enough score to use one of their abilities. Your abilities are sent to the other player, and could be as simple as making the notes move faster, or something as deadly as making the time you have to hit a note noticeably shorter. It’s a blast playing this mode because even the songs you’ve played countless of times feel different when you’re in the heat of battle with new abilities being thrown at you from all directions. 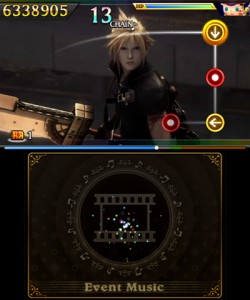 Every song itself also does a lot to make itself feel different from the others, too. Each one has three different difficulties: Basic Score, which is the easiest, Expert Score, which is for more experienced players who like to feel challenged while still not being tested, and finally, Ultimate Score, reserved for folks who’ve honed their craft. Every difficulty mode is certainly a large jump from one another and sometimes feels like there should be another mode to balance some of the more intense songs. Nonetheless, the difficulty settings give you only more reason to come back and keep playing since you’ll be consistently driven to improve your score.

In conclusion, Theatrhythm Final Fantasy: Curtain Call isn’t going to be a system-seller, nor is it going to be a game we’ll all remember for being amazing fifty years down the road. What it is, however, is an exceptionally well-crated rhythm gaming experience that not only sets the bar for what to expect out of the genre while also being a love letter to fans. It’s a Final Fantasy experience that should no doubt be played by fans of all ages.

I cannot stress this enough, but this game feels like it was completely made for the fans. Whether you’ve played all of the previous titles or have only seen footage of one, this game is a nostalgia-driven experience that will you keep you smiling from the minute you press start all they way until you’re just about sick of every song (and don’t worry – that won’t be happening anytime soon).