Posted on October 10, 2022 by Nicolas in Reviews, Switch eShop 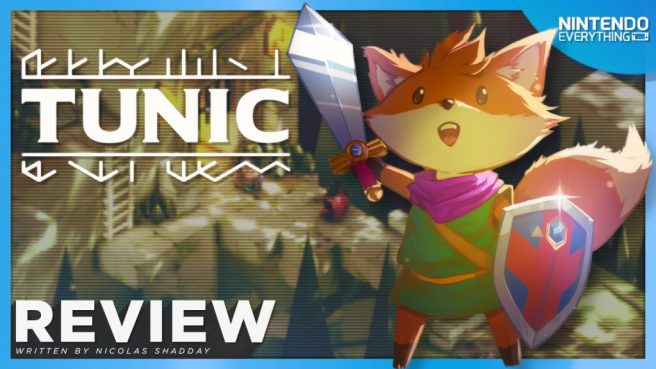 The gaming industry has certainly experienced a rise in the popularity of indie games within the last several years. From Shovel Knight to Undertale, Celeste, or Hades, these games have made a huge splash in the scene, and have coincidentally all made their way onto Switch. Indeed, the platform has found itself to be quite the reliable indie game machine, and as such it feels only fitting that Tunic, a little indie marvel that landed on Xbox earlier this year, would find its way here. It certainly feels right at home on the system, and I definitely enjoyed my time with it; the concept of an indie Zelda-like 2D adventure game remains novel and captivating, and I welcome more entries in the genre. Tunic is definitely a solid little title with some neat ideas, but it doesn’t quite break the mold in the way that the indie classics I mentioned earlier might have.

To get the more technical aspects out of the way, this version of the game is pretty solid. The title was originally developed for much stronger platforms, so it obviously suffers a few downgrades here and there in the form of visuals and frame rate. The resolution and visual effects being worse don’t hinder the game too much as it still has quite the charming art style, but it does lend it a sort-of fuzzy aesthetic, which is a bit of a shame. Frame rate-wise the game is capped at 30 FPS on Switch and sits there pretty consistently, but does suffer occasional performance hitches, especially during intense action. Ideally, for the best graphical experience you’d want to look at other platforms, but the game’s performance is perfectly acceptable here. It’s more than playable, and frankly, worse performance is to be expected of a game ported to the Switch from stronger hardware, so I didn’t find it to be much of an issue. 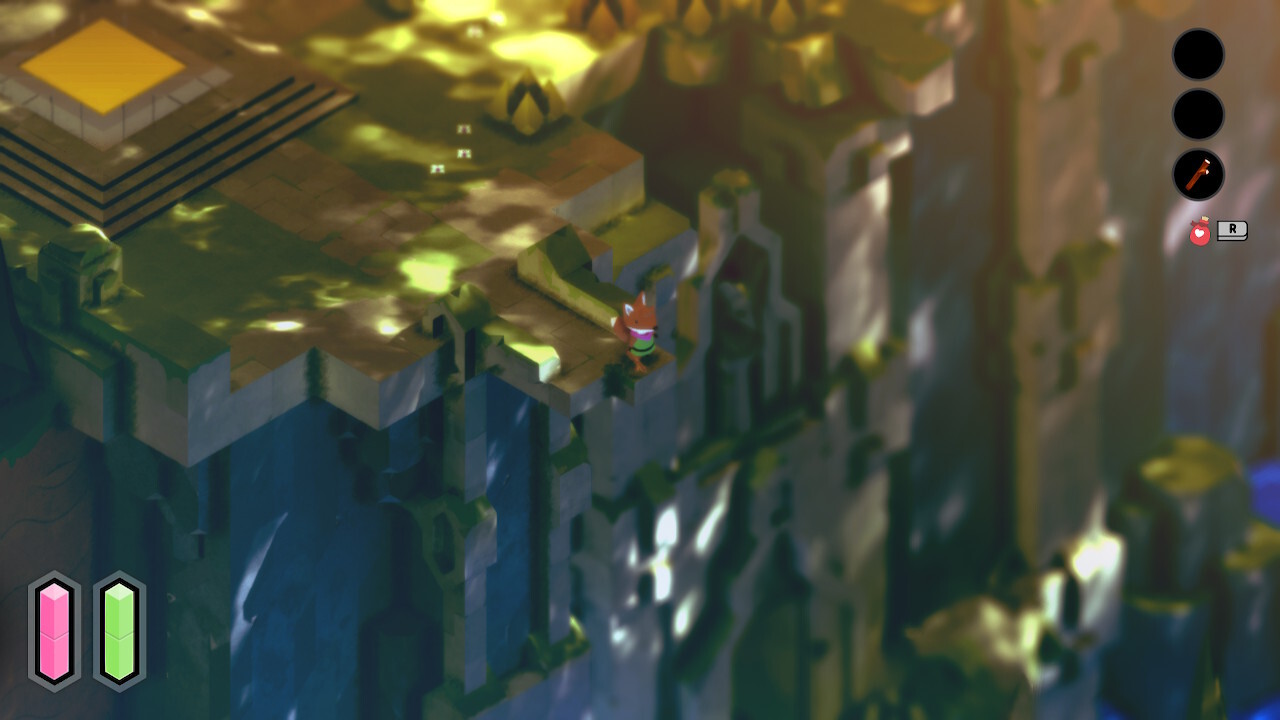 In terms of the game itself, you aren’t presented with much information upon starting it up. You take the role of a cute little fox character who wakes up on a grassy island with no clue of what to do, your only course of action being to start exploring the world. This aimlessness you feel at the start is prevalent throughout a decent portion of the game, and it’s very much intentional. The idea is to emulate the feel of older adventure titles that would just drop you into a location and drive you to exploration, and in doing so encourage the player through a sense of discovery.

This is likely where some of the Zelda comparisons are drawn from, as this manner of exploration is somewhat reminiscent of older games in the series. I would argue, however, that it doesn’t match up to a typical Zelda game as closely as you might expect; for the most part, the game doesn’t follow a strict dungeon structure, and the concept of using a wide array of sub items to solve puzzles and explore the world is mostly absent, barring a couple of exceptions. Regardless, exploration winds up being quite fun; the world is typically vibrant, well-built and positively teeming with secrets. You’ll find yourself wanting to hug every wall and check every corner, because the game is very fond of using perspective to hide away goodies and upgrades, which makes finding said items all the more rewarding. This extends into giving the game a great deal of replayability, as knowing where secrets are located can allow easy sequence breaks and early access to items in future playthroughs. 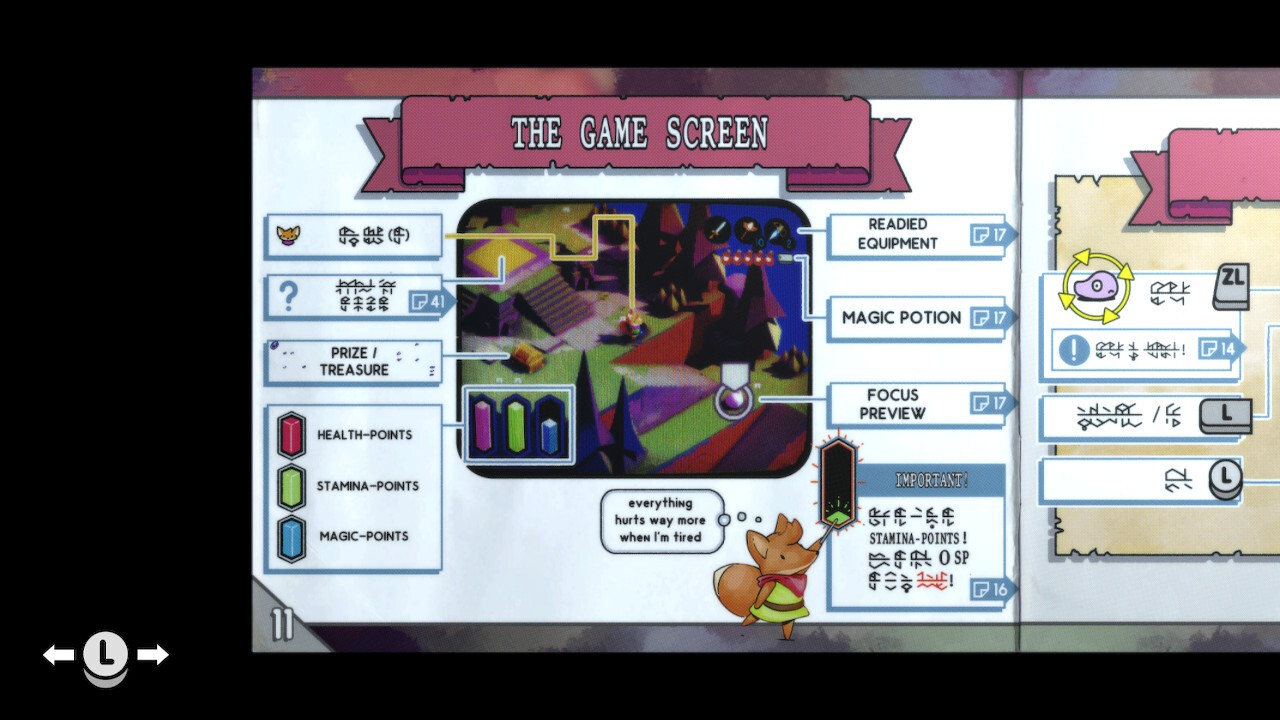 What makes the game’s exploration truly shine in my eye though, is its instruction manual mechanic. You see, the game is very obtuse with its directions, as I mentioned earlier. However, you’ll find little instruction manual pages scattered throughout the world, which are a type of collectible that forms an actual game manual you can access in the menus. This, in my opinion, is the game’s strongest feature; the concept of an instruction manual integrated into the game itself is just fascinating, and for the most part it’s done incredibly well. The manual is pretty much what you’d expect; it comes with tutorials, maps, hints and tips, everything you might expect from an old game manual. The real genius lies in the way the pages are spread out throughout the game, dictating the pace at which you unlock information. You might learn about basic systems or general objectives in a very early page, learn more intricate combat mechanics from after experiencing a few enemy encounters, before then obtaining a map to guide yourself to your next goal once the game’s world has opened up a little. It all feels incredibly natural, and consulting this virtual booklet reminded me of the fun of opening up an old strategy guide.

The instruction manual is even filled with charming little illustrations that decorate each panel (very much like an older Zelda game’s manual), which makes unlocking every new page a treat for the art alone. My only complaint regarding this system, which also extends to the whole game, is the language used. Tunic employs a language specifically crafted for the game, and nearly every bit of text uses this script. The game usually does leave critical information in English so the player can understand the basics of what is going on, but it can still become increasingly frustrating every time you unlock new information or lore, only for that information to be undecipherable and practically worthless to the average player. 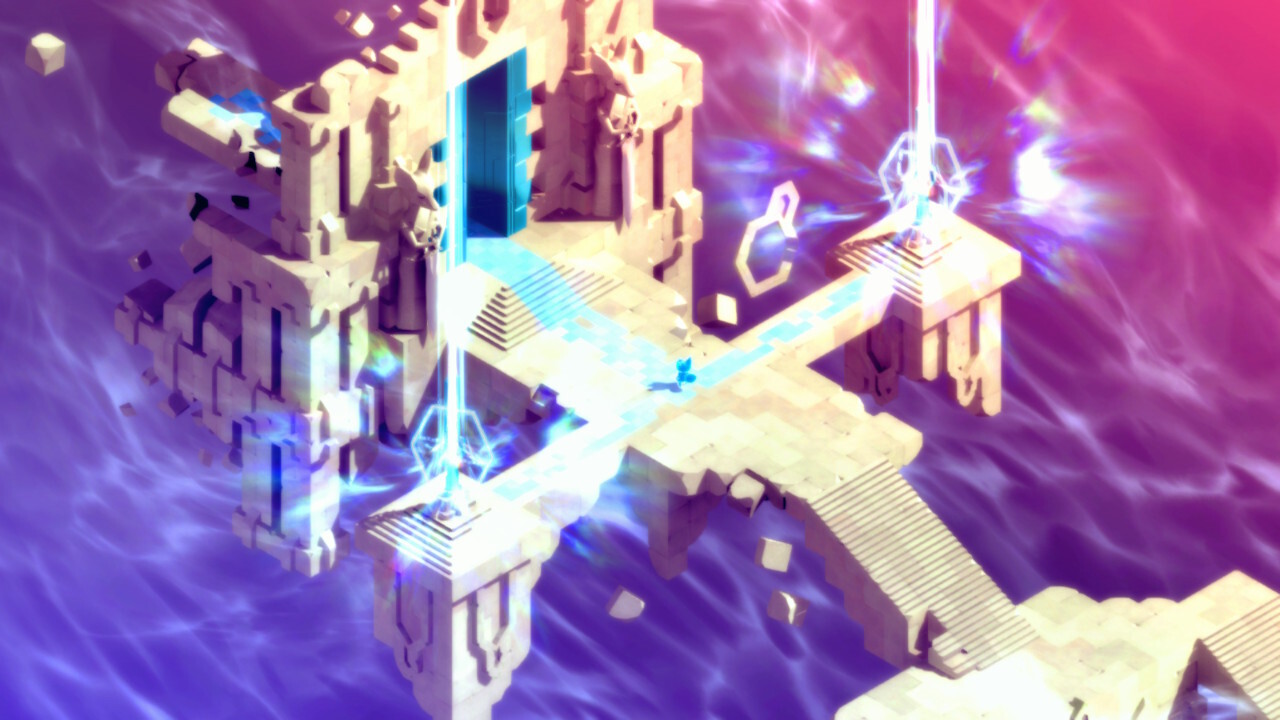 From a combat perspective, the game has often been compared to Dark Souls, and it’s obvious why. You have both a health and stamina meter, the former of which is refilled with a limited amount of potions, and the latter of which is depleted through attacks, blocking and rolling. Rolling provides a certain number of invulnerability frames, and upon dying you’ll lose some amount of currency that you can regain if you return to where you previously died. There’s also a limited magic meter you obtain partway through the game that is tied to specific item usage, and all of these various potions and meters refill when you rest up at specific statues, which also serve as respawn points. Again, it is incredibly reminiscent of Dark Souls, which isn’t inherently a bad thing. But it does mean that from a combat perspective, the game doesn’t really carve a niche for itself in any way, instead mostly just borrowing from other existing titles. This results in fighting being fairly hit-or-miss; attacks are satisfying and do have impact behind them, but both rolling and parrying can feel incredibly slow, and any late-game encounters involving multiple enemies can turn absolutely dreadful because of the game’s flawed targeting system.

Fundamentally, the combat sort of feels like it’s just “there” for the most part; it isn’t really detrimental in any major way, but it rarely feels particularly satisfying or engaging in the way that it probably should. It can also lead to the game being surprisingly difficult, as enemies can do massive damage and catch you off-guard if you aren’t prepared for their onslaughts. There are a few other associated systems linked to combat that alleviate this (which tie nicely into being rewards for exploration), such as an upgrade mechanic involving special items, hidden ability cards that give you certain perks, and consumable healing items or grenades that can provide an edge in battle. Overall though, I think this entire aspect of the game ends up being pretty average, fulfilling the purpose it exists for but not really striving to do much beyond.

As someone that often completes games 100%, one final point I want to touch on is the endgame/postgame of Tunic. I won’t delve into any spoilers (especially because discovering things for yourself is such a huge part of this game’s experience), but it has to be said that the content awaiting you at the very end of the game is a bit… bizarre. The entire game generally follows the structure of a fairly standard (if well-executed) adventure title, with a neat gimmick in the form of the instruction manual. This extends up to the final boss and standard ending of the game, but if you want to view the true ending and experience everything Tunic has to offer, it very quickly turns into a stream of constant, exceedingly complex puzzles. It creates an odd contrast where most of the game is relatively devoid of these complicated puzzles, but suddenly the very end of it turns into something akin to The Witness, complete with fourth wall-breaking riddles, the need for knowledge in musical theory and the ability to decode languages. Now like I said, this is technically an optional part of the game, and I’m sure puzzle enthusiasts absolutely adored this portion; I can certainly concede that many of these puzzles are elaborate and well thought-out. But as someone that enjoyed everything else the game had offered up to that point, it just constituted a bit too drastic of a shift for me.

Overall, I definitely enjoyed my time with Tunic. It’s a fun little adventure game, and its instruction manual mechanic felt like a genuinely novel concept that I would love to see explored in the future. I do think that it fails to break out of its shell outside of this gimmick, but I also don’t know that it necessarily needs to. If you’re looking for a brand-new cutting-edge game concept, this might not be for you, but it’s also okay for games to rely on tried-and-true mechanics every now and then. Heck, Tunic does this and still succeeds at being a charming little game worth the experience. Just be warned that if you plan on pursuing the game’s true ending, you might want to consider getting a degree in enigmatology.

Tunic copy provided by the publisher for the purposes of this review.