Posted on September 15, 2018 by Jakob Vujovic(@jakovujo) in Reviews, Switch 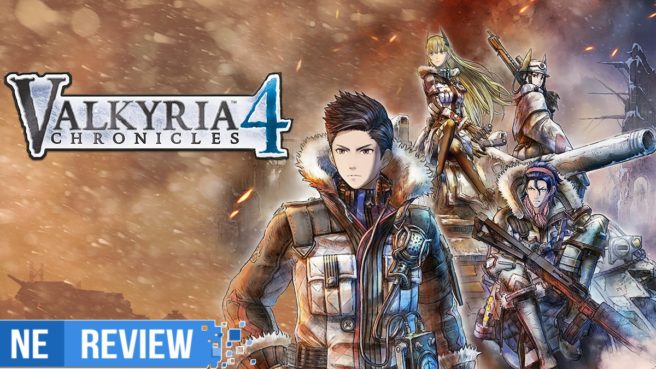 Valkyria Chronicles 4 is a the long-awaited return to the franchise’s roots. After ten years, some strange PSP sequels and odd unwanted offshoots like Valkyria Revolution, this is the first full-on watercolor outing since 2008. If you played Valkyria Chronicles, then you already have a good idea of what to expect here – and from that standpoint this is exactly what could be expected out of a (good) sequel.

This series falls in the tactics genre but there’s no perfect comparison to its style. Valkyria Chronicles 4 is fundamentally unchanged from the first game, but for this tactics subgenre whose closest cousin is Intelligent Systems’ forgotten 3DS game Code Name: S.T.E.A.M., more isn’t necessarily bad. This style of tactics game plays as more of a methodical turn-based third person shooter than it does a number-crunching X-COM. For those unacquainted, these non-traditional strategy elements makes for a softer kind of tactics game. Sure, there are underlying numbers that dictate the universal elements of health points or damage output, but the game streamlines a lot of this. When you’re out for blood, the circle that forms your aiming reticle will display the area that it’s possible for your bullets to spread. This, combined with the way the game displays probability – for example, you have twenty shots in a round, and it will take 25 bullets to kill this enemy if you aim at the body or four if you aim at their head – means that you have to plan your tactics around a different kind of ambiguity than whatever something like a 95% chance of an attack connecting means. It’s a style that’s streamlined and intuitive, but not without its own unique wrinkles to explore. 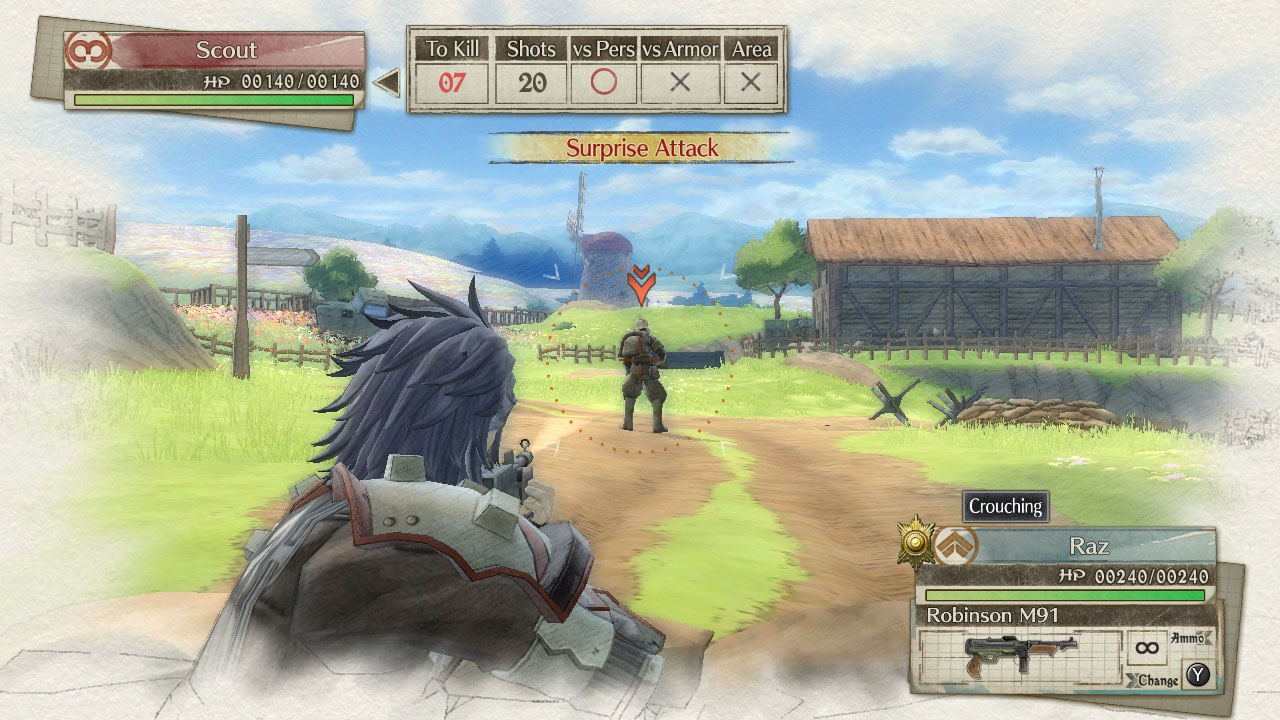 Like the first game, Valkyria Chronicles 4 cares about its characters. It has to put resources into this in particular, both as a backbone to its extremely anime take on Band of Brothers and to support gameplay systems that could get old fast. Each unit under your command is their own unique character with preferences and prejudices, entering the war with the baggage of having lived life as a person of their time and place. Aside from these existing as inconsequential flavor text in brief character bios and side interactions, a unit’s personality is also a consideration in how you develop your strategy in a fight.

Each character has what the game calls ‘potentials’ and they can either be beneficial or something to avoid. A scout on my squad, Rosetta, has the pacifist potential which means there’s a chance her turn will end immediately after she defeats an enemy. At the same time, she also has the potential ‘fighting for ideals’ which paradoxically increases her attack power, as well as ‘neat freak’ which means that she becomes worried about getting dirty while in cover, lowering her firing accuracy. Other characters might be socially awkward, meaning they fight best at a distance from other units, or they’re racist against the Darcsen (the game’s Jewish analogue in its alternative World War II scenario), or Darcsen units might share a bond meaning they fight most effectively together. The list of intricate potentials that the designers thought up is sprawling. On the surface, this system is incredibly silly both in the way it will trigger in battle with a dramatic closeup, as well as the sheer pickiness of these soldiers. But it’s perfectly reflective of the larger tonal whiplash that was present in the first game and returns here in full force.

There’s nothing wrong with some levity in a 40+ hour game that wants to tackle dark subject matter, but the shifts from goofy anime hijinx to the game pondering the cost of war are quick and frequent. This disparity only becomes more odd as the game progresses, and what was supposed to be a swift counterattack to end the war before winter hits becomes a grueling trudge through a winter behind enemy lines, freezing and starved of supplies. 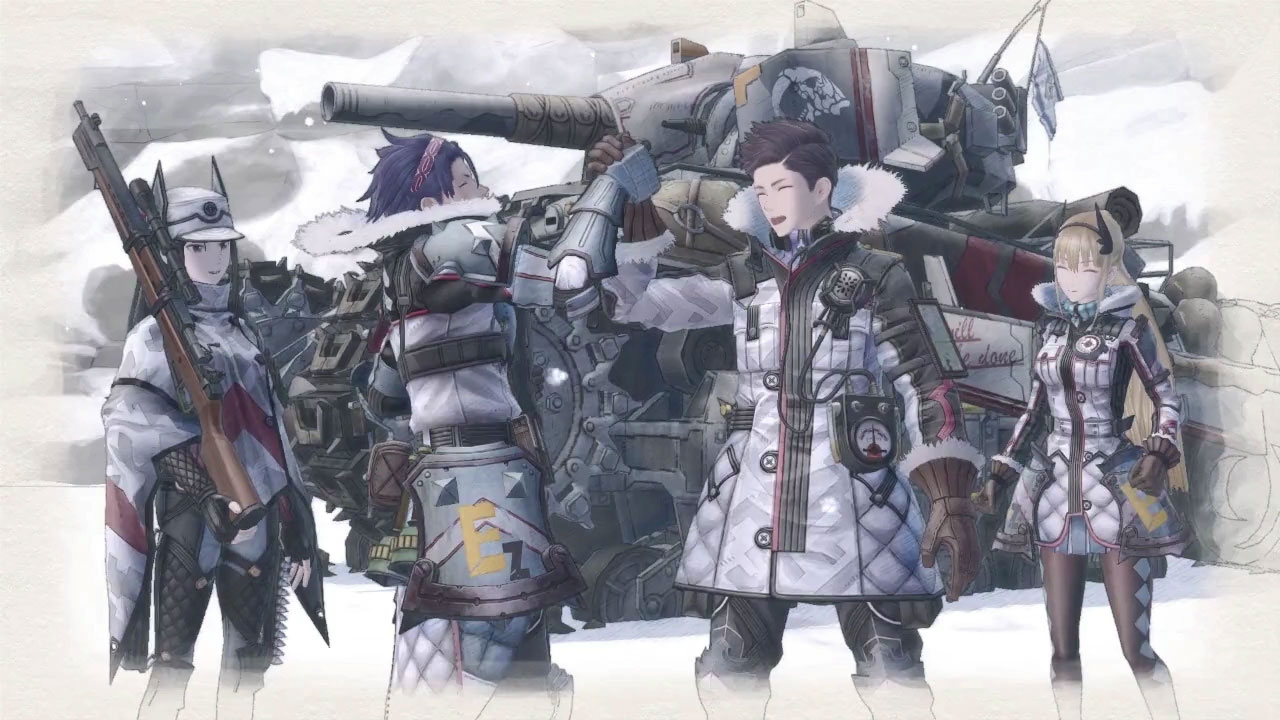 Valkyria Chronicles is really weird about how it goes about portraying World War II. It’s not meant to be exactly literal; Europe becomes Europa, countries and alliances are renamed, somehow the game’s Holland stand-in called Gallia has major military muscle, the Soviet Union is just part of what the game calls the East Europan Imperial Alliance – there’s a lot that depends on nostalgia and reinforced cultural reproductions of this being The Good War. This is so much the case that some of this game doesn’t do a lot to actually make the Imperial invaders evil aside from vague glossary acknowledgements of their political system being autocratic, and Eastern Europe being culturally coded as a bad, scary place. When it does very loosely draw direct parallels to a real life Nazi monsters, the plotlines get so anime that it loses any significance. Curiously, Japan’s involvement is written out of this.
The good news about all of this is that Valkyria Chronicles 4 isn’t really a political drama. At its heart, it’s about Claude Wallace, the talented upstart commander negotiating the interpersonal drama of his squad and earning their trust. This is what ties a pretty straightforward gameplay system, potentials, and the many small character vignettes together. Like the first game, it’s at its best with the characters of Gallia’s Squad E. Those petty, fussy, lovable scamps.

There’s not a strategy game that pushes all the same buttons as Valkyria Chronicles 4. Even as its turn-based third person shooter gameplay systems have been iterated upon by other games since the first game in 2008, there are few strategy games that care so thoroughly about their characters. The game has issues with how it presents its story and tone, but special attention was clearly paid to building cohesion between the personalities of Squad E in both a narrative and gameplay sense. I could poke holes at the game’s oddities all day, but I’d be lying if I said I wasn’t attached to my swathe of allies.

Valkyria Chronicles 4 review copy provided by SEGA for the purposes of this review.