[Review] WarioWare: Get It Together! 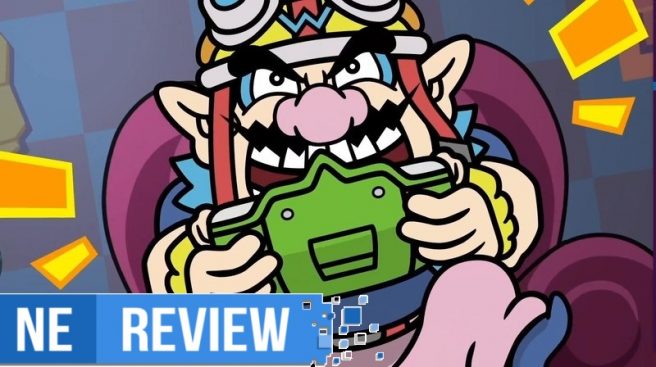 WarioWare games are a collection of simple “microgames” that are fast and often frantic. Debuting back in 2003 on the Game Boy Advance with WarioWare, Inc.: Mega Microgame$!, the series has seen many entries over the years with new characters joining the fray. In our latest entry, our cast is back again, this time on Switch with more microgame mayhem and yet another twist on gameplay. While the franchise has been known to take advantage of Nintendo’s hardware in the past, the changes here are more on the core of play. How does this new WarioWare experience fit Nintendo’s hit hybrid console?

Wario and his colorful crew have been collaborating on a new game project together, each contributing levels and minigames for a finalized experience. Luckily, things seem to be going rather well. That is, until everyone is sucked into the game and massive bugs run rampant across their programming. Trapped in the digital space of their own creation, the scattered crew mates must not only find one another and stick together, but battle it out in their own levels to squish those pesky bugs. Traveling across the levels will add more and more cast members to the roster, which in turn allows the use of their own unique abilities to take on the minigames within the game world. 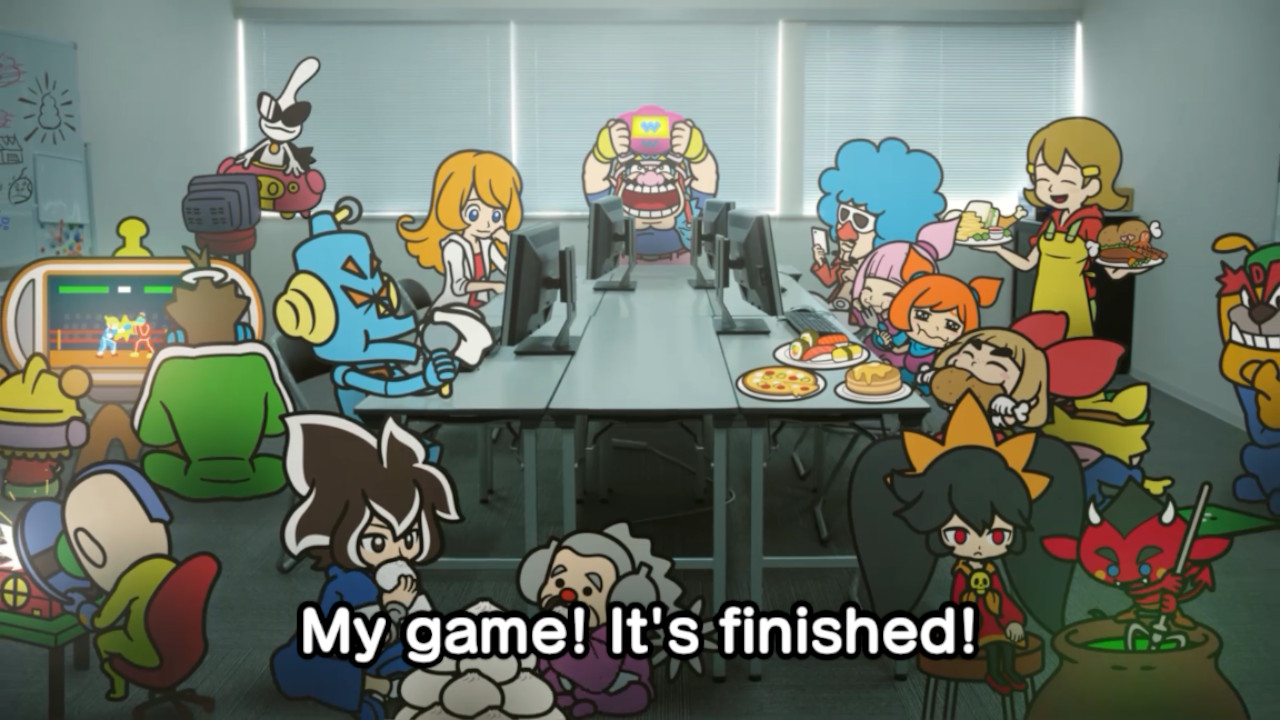 In this particular game, a crew must be formed with multiple members. Each character controls differently in Get it Together! The story mode itself acts as a tutorial for each crew mate, letting the player get used to the controls and different ways to approach the various minigames. While some characters may seem easier to use than others, certain characters have niche uses for particular games that make them a great inclusion in your crew. Getting to know how each one controls and which vibes best with your play style becomes a crucial part of the story progression. Clearing each zone allows you to permanently add a recovered character to your crew list, allowing them to be used in subsequent zones.

Players can practice using a character at any time from the main menu, which can be helpful to return to if you forget how to best make use of a character’s particular skills or if you’re struggling. While I found each unique crew member to be fun to use, I definitely found favorites within the first hour or so of the game, but I never felt like I was locked into particular choices or forced to use one person above another. In fact, as the game progressed, my crew would rapidly change based on how I was feeling at any particular time. Any crew can accomplish a task, and while playing with your favorites seems a safe bet, the challenge of using tougher characters can bring on more fun when you’re ready for it. 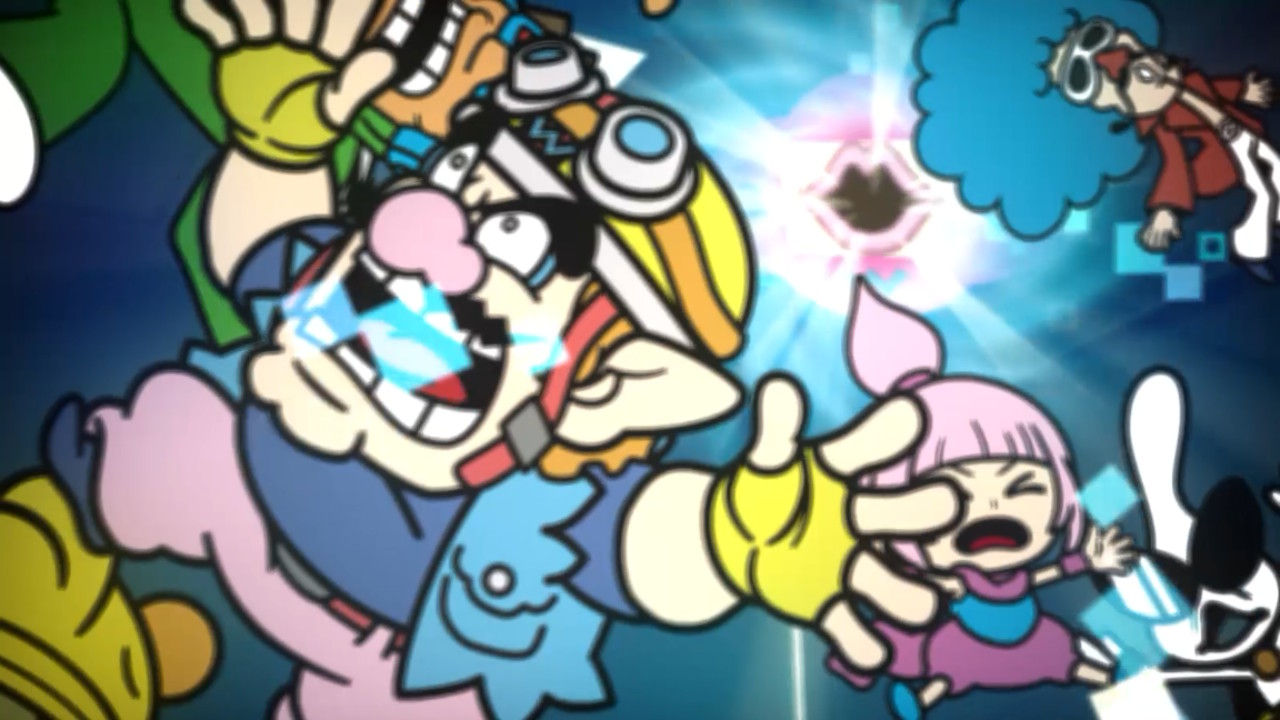 The microgames in this entry are separated out by zones, each one having a different theme based on the character recovered in the area. Themes are sometimes zany affairs that can leave you with lots of laughs, or simple breakdowns of past minigames or Nintendo franchises that many will be familiar with. From trying for a perfect Fire Emblem: Three Houses Tea time to plugging a large nose with your crew member, the games will be short and simple affairs that give you a tool tip on what to do, then leave you to do the task at hand. Sometimes these tasks are very simple, and other times they may seem impossible, but changing out the character being controlled can make all the difference.

While I may not be able to cover cat poop in a litter box using characters like Kat & Ana that keep jumping endlessly, being able to pick up the litter with Orbulon and simply spread it over the top is much easier. Characters will have particular strengths, and very obvious weaknesses, making it frustrating at times to fail a minigame with someone that you know would have went worked within another. This leads us to trying out different combinations per zone and tailoring our party to the tasks at hand – and inciting pretty mad respect for those who can easily accomplish a task you haven’t been able to master before.

If you’re feeling a bit defeated, you can always tackle a zone with a friend. Story mode does allow for two-player cooperative play. While it can be very difficult to play on a tiny screen in tabletop mode, docking the Switch gives a really great couch co-op feel that had me reminiscent of simpler times. Regardless of how you play, the game looks absolutely great in each play mode and the art style of the cut scenes was very endearing on the big and small screen. I did go back and watch the cutscenes in docked mode, and I was surprised to see how great it all looked, having me wish for a WarioWare anime of sorts. One can hope, yes? 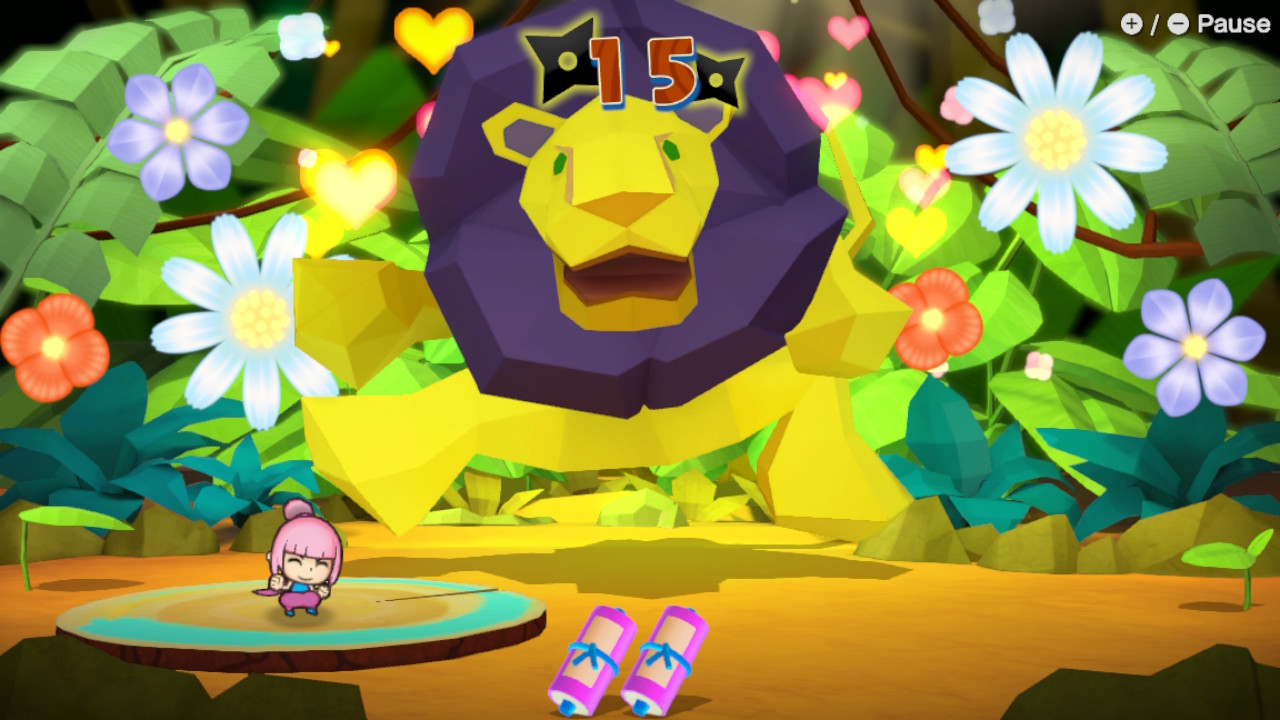 As always, there are some extras packed in to Get it Together! A variety pack is available, allowing for multiplayer experiences for more intensive minigames. In Friendless Battle, players go head to head to fight one another in a Smash-like battle. Whittling down enemy HP and being the last one standing declares you the winner, which can be easier said than done if some of your friends are at home with their chosen characters. Gotta Bounce is a digital game of keep up, which sees players taking turns keeping the ball in the air – should it touch the ground, everyone loses and your streak is at its end. This one saw a lot of play in my home and for such a simple game we put a lot of time into it.

Online ranking is available in the Wario Cup as well. Each week new challenges are posted and you can try to get a high score. The better you do, the more rewards you will reap at the end of the week. Trying for a good rank is hard in some instances, like last week when if you failed a minigame, your crew member was knocked out and unusable, and once you ran out your time was up. This week, a time attack is at play, tasking players with completing a set of themed games in the smallest amount of time possible. While I like this one way more than last week, I still find myself struggling and have to set my group up. Using favorites here is not always in your best interest though, as certain characters deemed easier than others award less points per victory, and more challenging ones can significantly raise your score upon a successful run.

The Play-o-pedia is also back, showing the full catalog of games, unlocking each after successfully completing it in story mode. This has always been a personal favorite inclusion, allowing for practice of challenging games to help players get the hang of them, and allowing the tracking of high scores when completing them. Players can choose a crew size, then continue completing the game over and over until they either fail four times, or just get sick of doing the same thing repetitively. The games are separated out by the zones they appear in, which was an integral part of my team planning for squashing my previous scores in story mode. 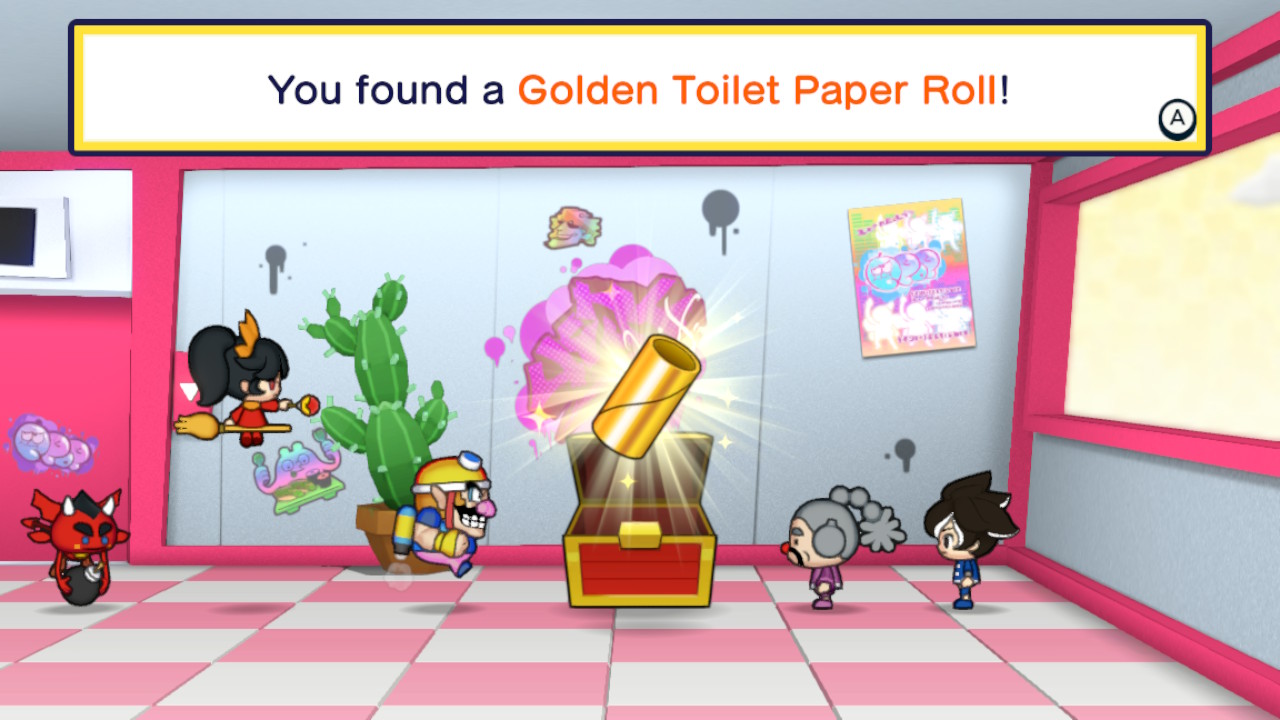 For this title, story mode is the particular shining point. Being able to rack up high scores in each of the zones left me feeling satisfied, and it was always fun to challenge myself with a crew of characters ill-suited for the tasks at hand. Learning the ins and outs of each zone and each character was a lot of fun, and with that I was able to fully enjoy the game. The scenes after completing a zone were always fun and engaging, and seeing the characters interact with one another brought on more than a few laughs. I still have no idea what Wario would want with a golden toilet paper roll, but who am I to begrudge a man of his harmless desires?

As with each WarioWare game, the frantic gameplay works well in small gaming sessions, and I found myself booting up the game while on break from my day job, while waiting on people to get ready for a trip, and even while waiting for dungeon queues in my favorite MMO. WarioWare games have a certain charm about them that is defined by their silly childish humor, and this one is no different. While the games included, story, cast, and controls always change over the years, the same core fun that I had with the first title is still there within, making this yet another great entry in the series.

WarioWare: Get It Together! may not have strange hardware to take advantage of this time around, but that doesn’t mean its any less of an experience. While this game can be frustrating with rotating characters around due to bad matchups with microgames, the feeling of accomplishment when attaining a high score makes it all the more worth it. With multiplayer inclusion, online leaderboards, endless modes, and some old favorite microgames making a return, this game takes a lot of what has worked before and mashes it with enough new to keep things interesting. I would definitely recommend picking this up, and if you’re on the fence about it, the eShop demo may be able to sway you.

WarioWare: Get It Together! copy provided by the publisher for the purposes of this review.

More: highlight, Intelligent Systems, top, WarioWare: Get It Together!