RPGolf Legends getting a physical release on Switch in the west 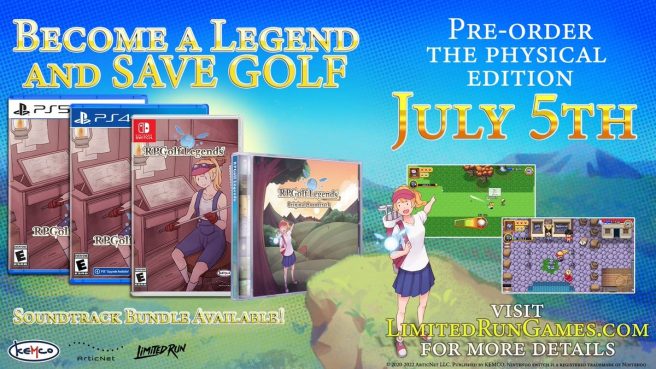 Limited Run Games is preparing a physical version of RPGolf Legends for Switch in the west, the company has revealed.

Fans will be able to pick up a standard copy as part of its distribution line. Right now there are no plans for any special editions.

RPGolf Legends debuted on Switch at the start of the year and although a physical version was offered in Japan, that wasn’t the case in the west.

An evil force has sealed all the golf holes in the world! Join forces with the spirit of a golf club and embark on a fantastic action-golfing adventure to save golf in the world!

Travel around in a unique open-world where monsters and golf coexist, get your best scores in 6 unique environments and beat monsters! When you are resting, do not forget to help people with their quests… every encounter counts!

Thanks to the class system, you will also get new skills, special items and a brand new look!
Whether you spend your time golfing, fishing, crafting or exploring… is entirely up to you.

A fantastic journey is about to start!

You’ll be able to pre-order the physical version of RPGolf Legends on Switch starting June 30, 2022. Limited Run will be taking reservations here.