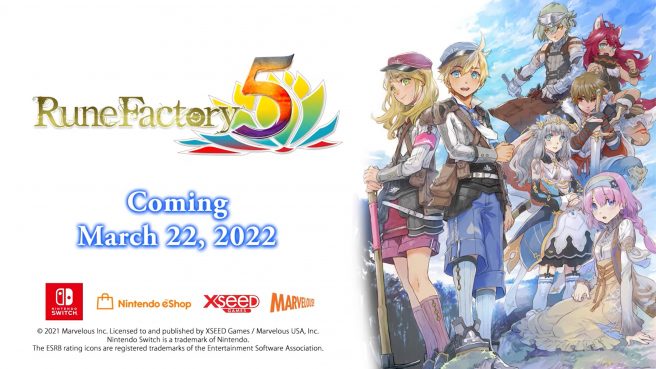 XSEED and Marvelous shared an update on Rune Factory 5 during today’s Nintendo Direct, confirming that the game will launch in the west on March 22, 2022. A new trailer was published as well.

Revealed on today’s Nintendo Direct, XSEED Games, the independent-minded publishing brand of Marvelous USA Inc., is thrilled to announce that Rune Factory 5, the first new entry in the popular farming/life sim RPG series since Rune Factory 4 released in North America in 2012, will launch for the Nintendo Switch system in North America on Mar. 22, 2022. Eager Earthmates who saw the new footage during today’s Nintendo Direct can check out the full trailer to see more of the title in action.

Set off on a grand adventure in a fantasy world with the latest entry in the Rune Factory simulation RPG series. After losing their memory, the hero lands in a small town blessed by nature. There, they are recruited into an organization of peacekeeping rangers known as SEED, and their new life begins. In addition to their normal duties of helping villagers, investigating rune-related mysteries, and rounding up rowdy monsters, leisure activities bring an equal amount of excitement. Whether spending time growing crops on a dragon’s back, embarking on fishing expeditions, prospecting the mountains for ore, or participating in local festivals, there are countless ways for Earthmates to relax after a hard day of adventuring.

Relationships that players foster with townsfolk provide additional depth to combat with brand-new link attacks, or at home with the newly introduced co-op cooking feature. As players grow closer to the twelve eligible marriage candidates and learn more about them through unique storylines, they can propose to their true love to begin a family of their own. Love knows no boundaries, and for the first time in the series Earthmates can choose any of the twelve eligible marriage candidates regardless of gender, which fans can get an in-depth behind-the-scenes look on how it came to fruition in our newly posted localization blog. The stage is set, and the curtain rises on an exciting new adventure in Rune Factory 5!

● Adventure Awaits – Saddle a monster mount and head out into the vast, vibrant wilderness to explore tranquil forests, ancient ruins, and even the inside of a volcano!

●Gardener Guardian – Choose from seven weapon types and fight alongside up to three companions, then swap to farm tools to grow a wide variety of crops with monster farmhands.

●Never A Dull Moment – Compete in cooking, crafting, and fishing contests or invite a sweetheart to join you for stargazing and flower-viewing during one of Rigbarth’s many seasonal festivals.

●Find Your Special Someone – Date one of twelve eligible marriage candidates, learn more about them by completing their unique storyline, then pop the question and start a family!