Sakurai again talks sword fighters in Super Smash Bros. Ultimate, says it’s not up to him whether they get in 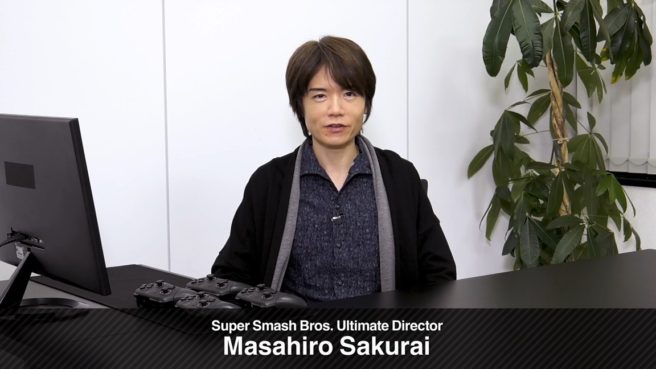 During the latest episode of Washa Live hosted by writer Mafia Kajita and voice actor Yuichi Nakamura, Masahiro Sakurai stopped by for a chat. Given the popularity of Super Smash Bros. Ultimate it’s only natural that he was asked about the game.

Pyra/Mythra from Xenoblade Chronicles 2 will soon be joining the Smash Bros. roster, and there have been all sorts of reactions to the reveal. Some fans have been disappointed to see another sword fighter being added to the game. However, as part of the conversation, the Smash Bros. director reiterated that those kinds of decisions aren’t up to him.

Here’s the full translation from Nintendo Everything:

Nakamura: Is there anything you want to announce?

Sakurai: No, nothing in particular (laughs) … But on the other hand, there is something.

Nakamura: What would that be?

Sakurai: I want to say that tomorrow or the day after that will be my special video on how to use Pyra and Mythra.

Kajita: Oh, the one where you show the in-depth look? That’s exactly what I wanted to know!

Nakamura: It’s those sword fighters again that have you [Sakurai] racking your brain, right?

Sakurai: Sword fighters…? Hey, it is what it is!

(everyone bursts into laughter)

Sakurai: Like it or not, it’s not up to me whether another sword fighter goes in the game.

Nakamura: You’re right. But even the players talk about it, you know? Like, “Agh! Why another sword fighter?!”

Sakurai: Well even if it is another sword fighter, it will be fine as long as we balance them properly.

Nakamura: You’re right about that.

Sakurai: And in contrast, sword fighters are easy [to implement].

Nakamura: What do you mean?

Sakurai: Compare that with Steve.

Kajita: Is it really okay for you to talk about stuff like this?

Sakurai: I’m sure if I go a little further, I will get something from Nintendo…

Kajita: How about signing some kind of contract with us? That should help…

Nakamura: As if such a thing exists! … Anyhow, thank you for joining.

Sakurai: My pleasure, thanks for having me.

Fans can learn more about the inclusion of Pyra/Mythra in Super Smash Bros. Ultimate tomorrow, March 4. The Sakurai Presents broadcast airs at 6 AM PT / 9 AM ET / 2 PM in the UK / 3 PM in Europe.

Big thanks to centurionnugget and Oni Dino for contributing to this post.