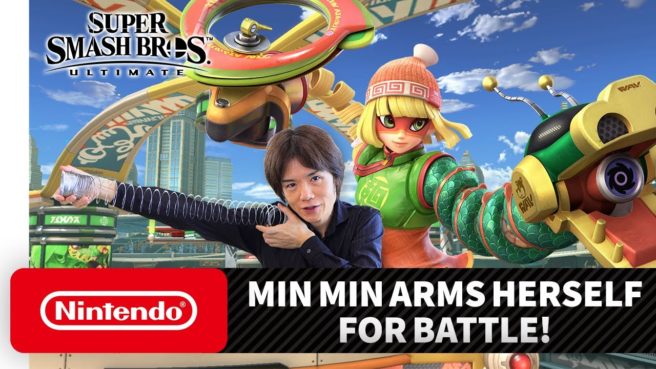 In this week’s issue of Famitsu, Smash Bros. Ultimate director Masahiro Sakurai spoke in-depth about adding Min Min to the game as part of his latest column. He also briefly commented on how he has been continuously working on the series since Smash Bros. Wii U/3DS, and after the next round of DLC fighters are finished, things will finally be over.

By the time this column gets published, the new fighter for Super Smash Bros. Ultimate, Min Min, should be out. I hope you all are enjoying playing as her.

I’m actually writing this ahead of time, well before we’ve released her. Even though I’m probably going to be repeating myself by talking about her playstyle, it is what it is. Let’s talk about one aspect.

The first time I saw ARMS was when Nintendo showed me their games in development so I could incorporate elements of them into the new entry for Smash Bros. This was before both games released, of course.

At that particular time, it was very difficult to integrate a single new fighter into the mix. We had so many different things going on during the production that I initially determined it wasn’t possible. That’s why we were limited to including Spring Man as an Assist Trophy and making some Spirits out of others.

After that, they decided there would be 11 DLC fighters, and one of them would be from ARMS…

That’s easy for them to say, but it was a very challenging task for me. In case it wasn’t obvious: it’s not as simple as just creating a fighter with extendable arms.

Characters in ARMS can punch with their right and left arms independently, as well as move around and jump while they’re throwing their punches. Plus, they don’t really have their own special attacks either. We’ll make them up whenever that’s the case, but we want to create attacks that make sense for the character, as well.

Min Min’s B special in Smash Bros. Ultimate is different from every other fighter. Normally, regular attacks are assigned to the A button and special attacks are assigned to the B button. In contrast to that, the A button controls Min Min’s left arm and the B button controls her right arm. There’s a real ARMS feel to her with managing each alternating punch—it feels perfectly like ARMS and perfectly like Smash Bros. It was really important to get that right.

This doesn’t only apply to Smash Bros., but when dealing with something that has an original iteration, you shouldn’t just copy everything beat for beat. On the other hand, you don’t want to go in making sweeping changes either. The most important thing is whether or not you can take those unique qualities and make something even more appealing than what you set out to do. Again, it’s not limited to just Smash Bros. or even games; you could say the same for making physical objects, stuff on display, comics, anime, film, and more.

Only 5 DLC fighters left now! Once I’m done with these, it’ll mark the end of our continuous development since Smash for Wii U/Nintendo 3DS. I’m going to keep up the pace and work from home on the rest of the fighters!

Speaking of which, I filmed Min Min’s debut from my own home – how do you think I did? Personally, I think there are some things I could improve on, but hopefully I won’t have to film under the same conditions next time around. I hope society gets back to normal soon.

Min Min was the first fighter as part of Fighters Pass Vol. 2 for Super Smash Bros. Ultimate. Nintendo hasn’t provided any hints currently as to which character will be next.