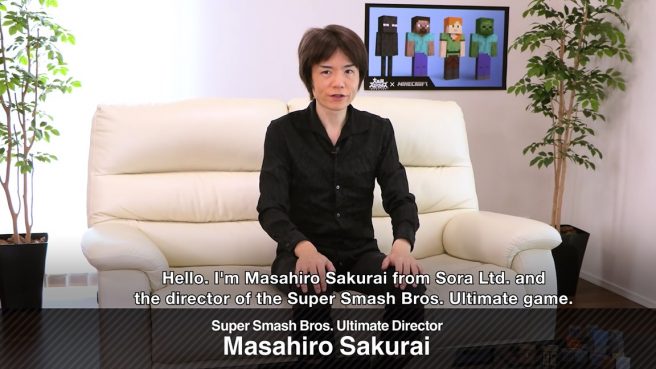 Super Smash Bros. Ultimate recently received new DLC based on Minecraft. In the latest issue of Famitsu, director Masahiro Sakurai opened up a bit more about the development of Steve / Alex.

Below are just a few of the noteworthy comments, courtesy of Siliconera:

– “We went to Microsoft to present the idea. They were very pleased.”
– “We were looking for a way to make edits based on stages made on Minecraft then into Super Smash Bros. Ultimate, but unfortunately, we quickly gave up on it. As expected, it was a bit too much.”
– “The music production was the toughest time we faced out of all Smash Bros. production. We couldn’t use some songs from the original work due to various reasons!”
– “There were a few tracks that we abandoned in the middle of the arrangement. In the end, I think we were able to find common ground without losing the mood thanks to the hard work of the musicians.”

Famitsu hasn’t officially released just yet, but we’re planning on a full translation of Sakurai’s column. We’ll have it ready later this week.