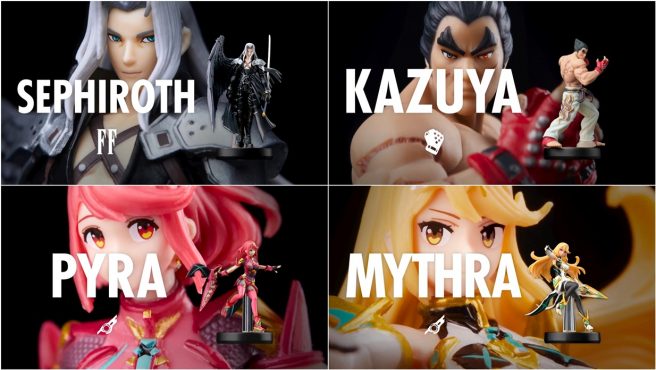 Original (12/14): Nintendo just announced a release date for the Sephiroth and Kazuya amiibo as part of the Super Smash Bros. line. Both figures will be available on January 13, 2023, the company has confirmed.

Nintendo also provided a brief update on the Pyra and Mythra figures. These amiibo are also slated for 2023, though a specific date hasn’t been provided.

Here’s a quick look at the upcoming products as shared by Nintendo on social media:

Super Smash Bros. #amiibo for DLC fighters Kazuya and Sephiroth will be released on 1/13/23.

Plus, look forward to the release of Pyra and Mythra in 2023! pic.twitter.com/6HEuGR07Nv

After the release of Pyra and Mythra, Nintendo may finally be done with the Smash Bros. amiibo. The only question mark at the moment is whether Sora will be getting his own figure. If he doesn’t, he’d be the only DLC character without an amiibo. Nintendo has been keeping quiet, so we’re not sure what its plans are – if any.

Will you be picking up any of these future Smash Bros. amiibo when they arrive in 2023? Share your thoughts with us in the comments.

Update (12/16): Pre-orders for the Sephiroth amiibo are live on GameStop here. The retailer also has Kazuya here.

Update 2:  Pre-orders for the Sephiroth amiibo are live on Best Buy here. Kazuya is up here.