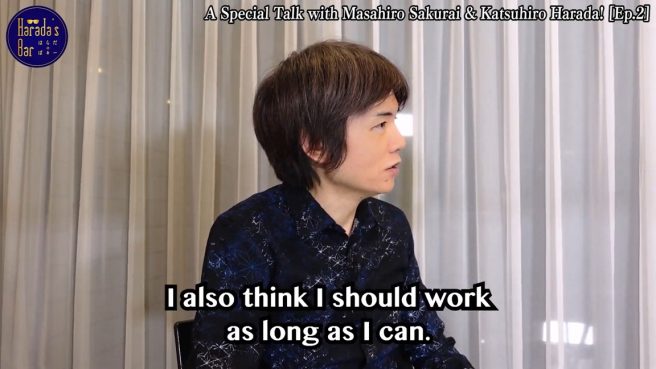 Bandai Namco’s Katsuhiro Harada recently caught up with Super Smash Bros. director Masahiro Sakurai for an interview in which the two developers discussed a bunch of different topics. The first part of the discussion was published last week, and the second portion just went up today.

Retirement is one notable topic brought up in today’s video. Here’s what Sakurai had to say on the subject:

“Our generation believes too heavily about always retiring in their 60’s. So, for example, if they’re around 50 they tend to think they’ve only got 10 years left. But you’re going to live after that too so you have to keep working. Life expectancy is getting longer and the population is getting older so contributing to society even after 60 if you can is, I think, something you have to think about no matter what job you do. If you can still do what you’re good at and if there’s demand, you can just do it. If not, you can just change what you do.

For example, Harada-san, or I, have been doing things that other people haven’t done so I think there’d be always a demand for it in some way. I’ll call it ‘art’ though. If nobody likes your art and there’s no demand, then you can think about what to do then. However, I’m also thinking whenever it ends for me, there’s nothing I can do about it.

Making games is really tough. I can’t count how many times I’ve thought that I want to quit. I looked at the questions we received on Twitter and a lot of people asked what kind of game I wanted to make. There’s no game I want to make… is what I’d like to say, but basically games are just more fun to play then make, guys. Even if you work really hard on making one sometimes you can get picked on, things don’t go well, and there are many setbacks that can happen. Also it could mean that you’re cutting your own life short to make games. It’s really tough like a thorny path. You have to think about competing with others because it’s a competition. You have to fight and survive so… In this way, I don’t think I can choose when I’ll retire myself. However, I also think I should work as long as I can. I think that’s one point. if your heart gets broken you can quit but if not and there’s demand you can keep doing it forever. That’s what I think.”

Sakurai also spoke about development and how he actually goes about making games, noting that he comes up with “a plan to overcome a problem I have at the time.” He commented on Meteos in which he “analyzed what makes falling block puzzle games fun.” Next Sakurai “thought about if you could replace erasing blocks with something” and “thought it’d be fun if you shoot them up”.

You can watch the full discussion below.

We’ll be sure to bring you the next portion of Sakurai and Harada’s talk when it goes live.