Snow Battle Princess Sayuki getting a physical release on Switch 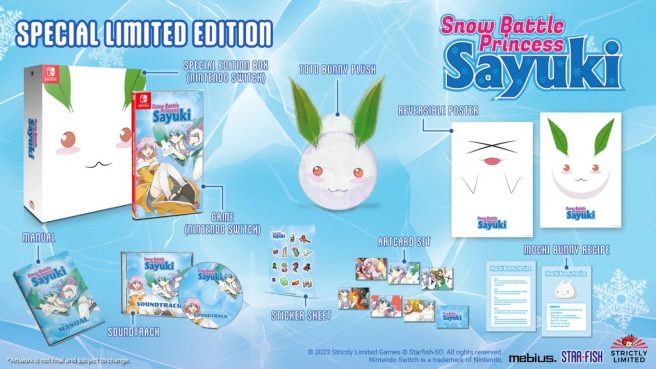 Strictly Limited Games is working on a physical release for Snow Battle Princess Sayuki on Switch, the company announced today.

A limited edition (which is essentially a standard version) will be sold alongside a “Special Limited Edition”. 2,500 copies and 1,500 copies will be produced respectively.

The title first launched for Switch as a digital download in 2019. Read more about it below.

Help Sayuki, a snow princess, break an evil curse set upon her loved one by finding 8 items scattered across 8 lands. The treacherous journey will take you across Blizzard Mountain, Monsters Castle and Hells Valley where you will encounter many mysterious yokai monsters.

Use Sayuki’s ability to control elements made from water to fight off the swarms of monsters with her icicle blast attack. Collect different color crystals to change and powerup the type of shots such as rapid, three-way and homing.

Pre-orders for the physical release of Snow Battle Princess Sayuki begin on October 2, 2022. You’ll be able to reserve it here.