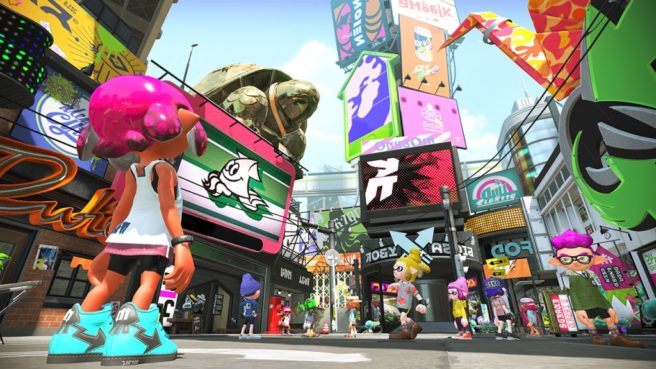 Japanese website 4Gamer put up a new interview with Splatoon 2 producer Hisashi Nogami today. Nogami touched on a variety of topics, including the setting, weapons / stages, gear, single-player campaign, amiibo, online, and quite a bit more.

We now have a pretty in-depth summary of what Nogami shared. Continue on below for our translation.

Nogami still can’t say much, but Nintendo wants to bring about the same type of enjoyment as the first title by introducing weapon updates in a similar kind of way. Also, for players who already decided on using a particular weapon type, Nintendo will prepare more variation so that they become interested in wanting to use other types.

Four stages were shown in the trailer. Three of them are new while the other one has been refreshed from the original game with new gimmicks. Nogami says other stages will be returning as well, but with new elements.

Just like in the real world, two years have passed in Splatoon 2’s world. Music in the last game sounded like pure rock. Since two years had passed, tastes have changed, and young residents of the squid world now tend to listen music that’s a bit more advanced and with a twisted feel, which is featured in the game itself.

Some gear will be carried over from the original, but the developers will add in a lot of new content here. There are completely new designs, and just like sneakers in our world, even if the shape is the same, coloring trends tend to change. That kind of thing is reflected in Splatoon 2. Nogami also basically seems to talk about how in the ’90s, high-tech Nike sneakers may have been hip, but it was later outdated and wearing more low-cut sneakers would be popular. The same kind of thing is happening in the squid world.

About different user interface from Wii U to Switch

The team purposely tried keeping the same game properties and main controls from Wii U. Even on Wii U, you can’t see two different displays at once. When playing on that console, you were moving your gaze back and forth. Nintendo essentially replaced that with button controls.

Nintendo came up with the current system after plenty of trial and error. In Splatoon 2, players can still control their character while displaying the map. The map was fixed in a bird’s-eye view on Wii U, but if you move with gyro controls, the map also moves. Nintendo wants the map to be viewed in a 3D sense. That way you can more easily recognize where enemies are or where areas have been painted (and maybe how much your team / the opposition has painted in terms of percentage).

Nogami was asked about touch controls for Super Jump. Nintendo experimented in various ways, but ultimately decided to only use buttons.

Splatoon 2 will of course have a single-player campaign just like the original. The Squid Research Lab is still “researching” it, but it is planned to have the same volume of content as the first title. Also, like the last game, Nintendo wants the campaign to serve as a way of players to become familiar with the controls if they’re hesitant to jump right into the competitive scene. They also want to show the depth of the squid world similar to what had done with Sunken Scroll.

Since fans bought the amiibo and feel attached to them, he will make sure that they can be used in Splatoon 2. Nogami asks fans to keep the figures with them.

Splatoon 2 will naturally be a part of Switch’s overall online service / subscription. Nogami talks about how if you post something like, “Does someone want to battle?” on social media, you can get together with others and create a nice temporal community. Then you can battle while communicating via voice chat, and when it’s finished, you can dissolve the community. Nintendo is planning on building a system so players can do things like this easily.

The Squid Research Lab is “researching” this, but would like to host regular events which players can look forward to.

Miiverse posts worked especially well during Splatfests. As an example, when there was the “Cat vs. Dog” competition, a lot of player posts were sort of like memes. It was almost like a call and response between developers and players.  There is no Miiverse on Switch, but Nogami wants to create a similar feature which will generate the same kind of excitement which is created by the interaction between developers and players.

Dealing with lag is difficult, but Nintendo is considering various ways of dealing with it. The transmission data size has been decreased thanks to some optimization, meaning connection errors will happen less than in the first Splatoon. Also, Nintendo will be trying to match players who are closer together or on a similar communication quality as much as possible. Various improvements from the last game are being implemented in Splatoon 2 as well.

4Gamer asked if players will be matched together based on similar bandwidth usability. Nogami responds that a person’s internet connection quality can’t just be judged by throughput, since various elements need to be considered, so Nintendo isn’t just measuring with one regulation. Nogami also said Nintendo is trying to improve various layers of communication quality issues.

Splatoon was a new IP on Wii U, so everyone could begin from the same starting point. But with Splatoon 2, there are those who played the last one and others who will be coming in completely new. Nogami wants both types of players to be satisfied. In order to strike a balance, Nintendo is putting an emphasis on making Splatoon 2 fun to control and play above all else. Strategy comes comes after that. Nogami points out how if you don’t feel enjoyment when you kick a ball, you won’t want to continue playing soccer. He thinks strategy will be built by players gradually, and wants to grow the environment together with players. If Nintendo adds new weapons and stages at once, some players will be left behind, so content will be added by carefully watching how players interact with the game.