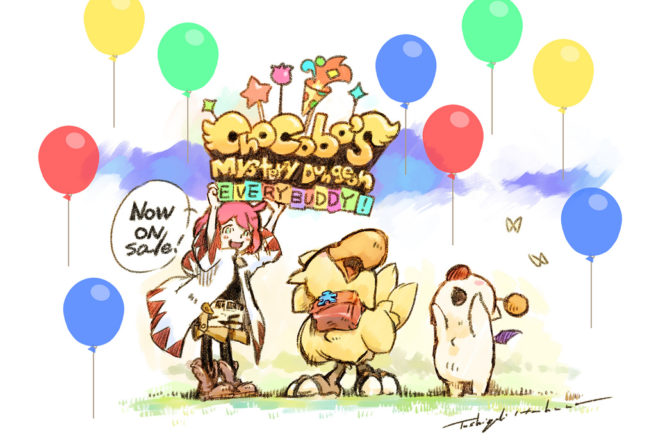 Square Enix character artist Toshiyuki Itahana has participated in a new interview as part of the release of Chocobo’s Mystery Dungeon Every Buddy. There was plenty of talk about the game itself, but a couple of topics outside of that as well. Among other things, Itahana commented on where the idea for chocobos came from.

The full interview is as follows:

Hello Itahana san! What was your role in Chocobo’s Mystery Dungeon Every Buddy!?

I also discussed specifics about the direction of this game with the producer at the beginning of development, including which title in the series would serve as a basis, and what features should be implemented.

Do you know where the idea of chocobos first started?

Chocobo is a character that was contrived and designed by Koichi Ishii when Final Fantasy II was being developed. The one that appears in Chocobo’s Mystery Dungeon is a version that was stylized specifically for a Final Fantasy spin-off with a rogue-like system. I designed it when I was temporarily assigned to work at Square Soft while I was a designer at my previous company, a toy manufacturer. At the time, I explored various designs including chocobos with a sharper beak that appeared more like a dinosaur as well as those that appeared more like a chick.

What’s been your favorite Chocobo design since its inception?

It happens to be a job in Every Buddy!, but the White Mage Chocobo is very cute and has to be one of my favorites. It’s been released as a plush, so I always have it decorating my desk. I also like the Red Mage Chocobo, which also is a job, and its appearance is pretty cool! The red hat suits the Chocobo really well and it’s also a very strong job.

What was it like designing the Chocobo style for this game vs. others?

Compared to other titles I’ve worked on, such as Final Fantasy IX, Final Fantasy Crystal Chronicles, Lightning Returns: Final Fantasy XIII or NieR:Automata, I took care in developing designs that still look appealing, even after simplifying them by paring down the details. Simply put, I aimed to create designs that would be easy for even children to copy and draw.

As a result, we received many wonderful submissions for the “My Chocobo Contest” that the Chocobo’s Mystery Dungeon marketing team recently ran in Japan where we asked participants to share various Chocobo-themed handcrafted items and dishes. I enjoyed looking through each and every one of them with the development team. Everyone is so talented — we were so surprised! I’m truly thankful for everyone who participated.

The appeal for Chocobos in this game is that they have some very neat jobs, how was designing the style and costume for each of the jobs?

There are numerous jobs in this title so it was quite a task to differentiate the designs.

For any character, we need to ensure the job is easily identifiable through the colors used as well as the silhouette. It’s relatively easy to distinguish the job with the equipment in-hand for human characters in Final Fantasy, but a Chocobo is unable to carry anything by hand, so I try to draw designs that make the job easily identifiable with few colors and a simple silhouette.

Aside from that, compared to other titles, these stylized designs are relatively easy to transform into plush and merchandise, so I have a lot of fun drawing these as I’m also conscious about creating designs that would retain its appeal, even when they’re made into merchandise.

Which of these jobs is your favorite to play?

The machinist is a new job that has been added to this title. It allows you to set traps and, if used wisely, unleash very powerful attacks. I also like the design. You’ll be able to enjoy the process of leading monsters into traps in a quite rogue-like manner. In actuality, the machinist is based on a design submitted by a Chocobo’s Dungeon series player for a job design contest we had previously conducted. Regrettably, the design didn’t make the cut back then, but it’s making its first appearance here.

What do you recommend for new players to this game and series?

There are two ways to enjoy Every Buddy! 1) You can have a blast with others by playing and discussing strategy with family and friends, or 2) You can dive into the game alone when you want to take time and cautiously consider your moves as though you’re solving a puzzle.

For those who think rogue-like games may be difficult, I would love to see you try experiencing this adventure with Chocobo at your side since the beginning is designed to ease you in. For experienced players who enjoy and prefer a challenge, we prepared dungeons with higher difficulty, so please give it a try and let us know how far you get! 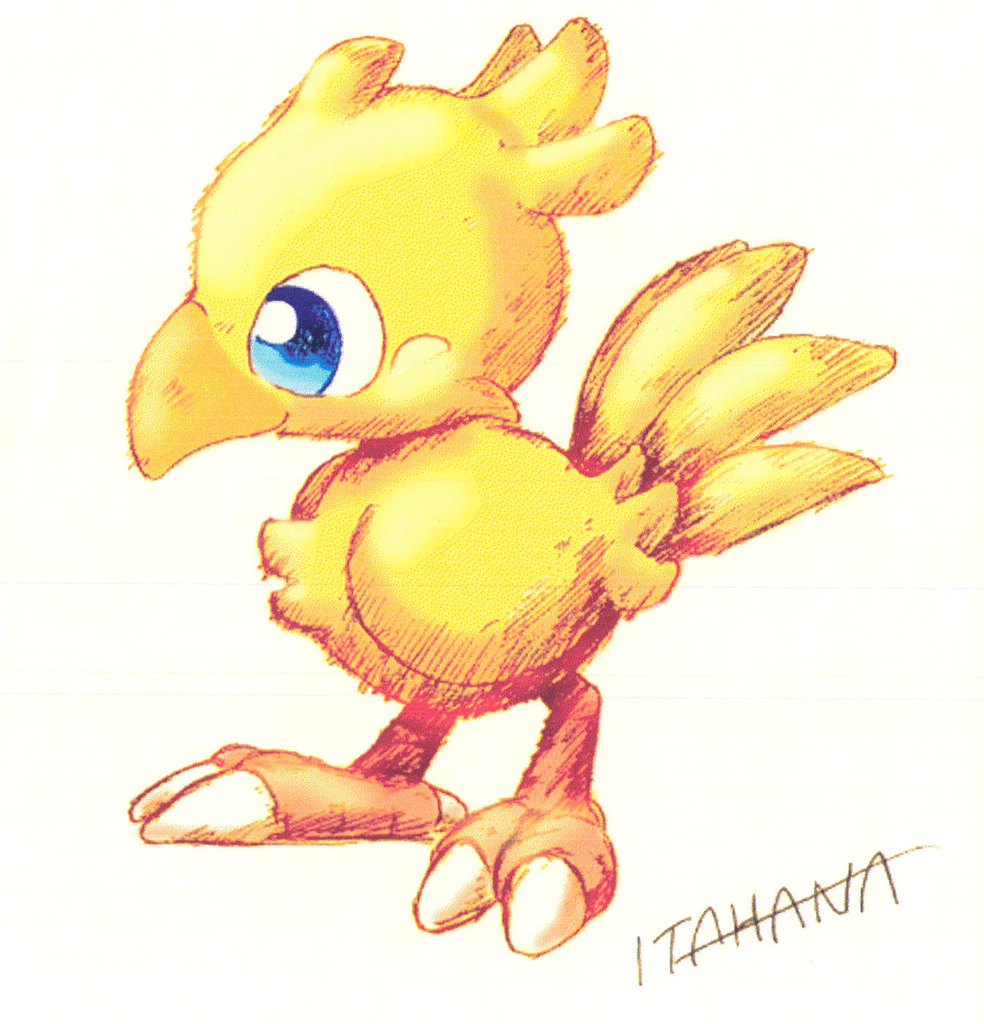 “This art was the first time I designed a super stylized Chocobo, for the first Chocobo’s Mystery Dungeon title. Compared to the stylized Chocobos of today, this one’s beak and nails are quite a bit sharper. We added some more roundness to them when we translated it into pixel art for the actual game data. This is something I designed about 22 years ago, so it makes me feel nostalgic, but the signature beside it is uncool (LOL).”

“I designed this as package art for Chocobo’s soundtrack. Chocobo and the monsters are stylized, and they’re performing instruments together here. I like illustrations that let you imagine the moment that’s being captured, so when I drew this, I made sure to give them facial expressions that hint at some sort of story. Who might be the character hiding in the grass?” 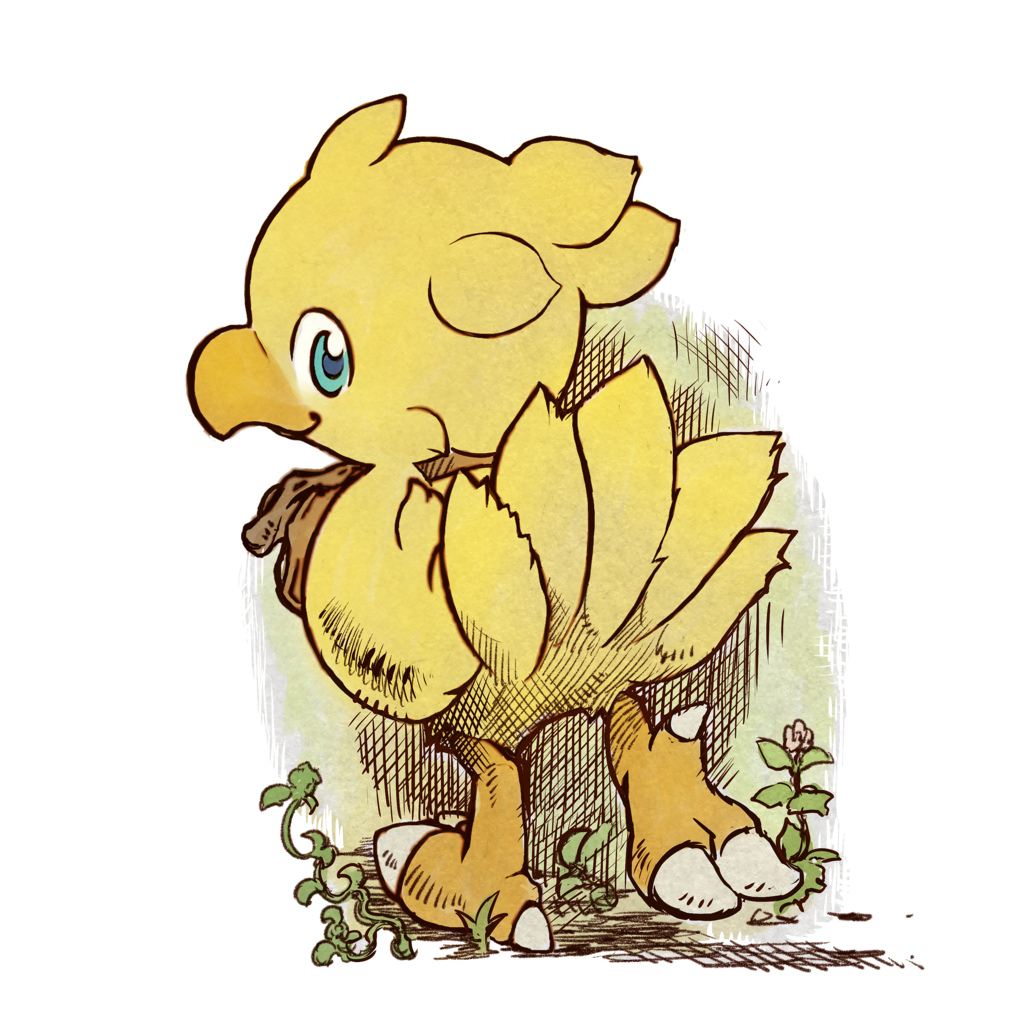 “I drew this up for a party game called “Chocobo’s Crystal Hunt.” I aimed for a similar feel to art that was drawn by Steve Jackson and Ian Livingstone for game books in the past – these were popular in Japan back then as well. I draw Chocobo in this “glancing over the shoulder” pose rather frequently.” 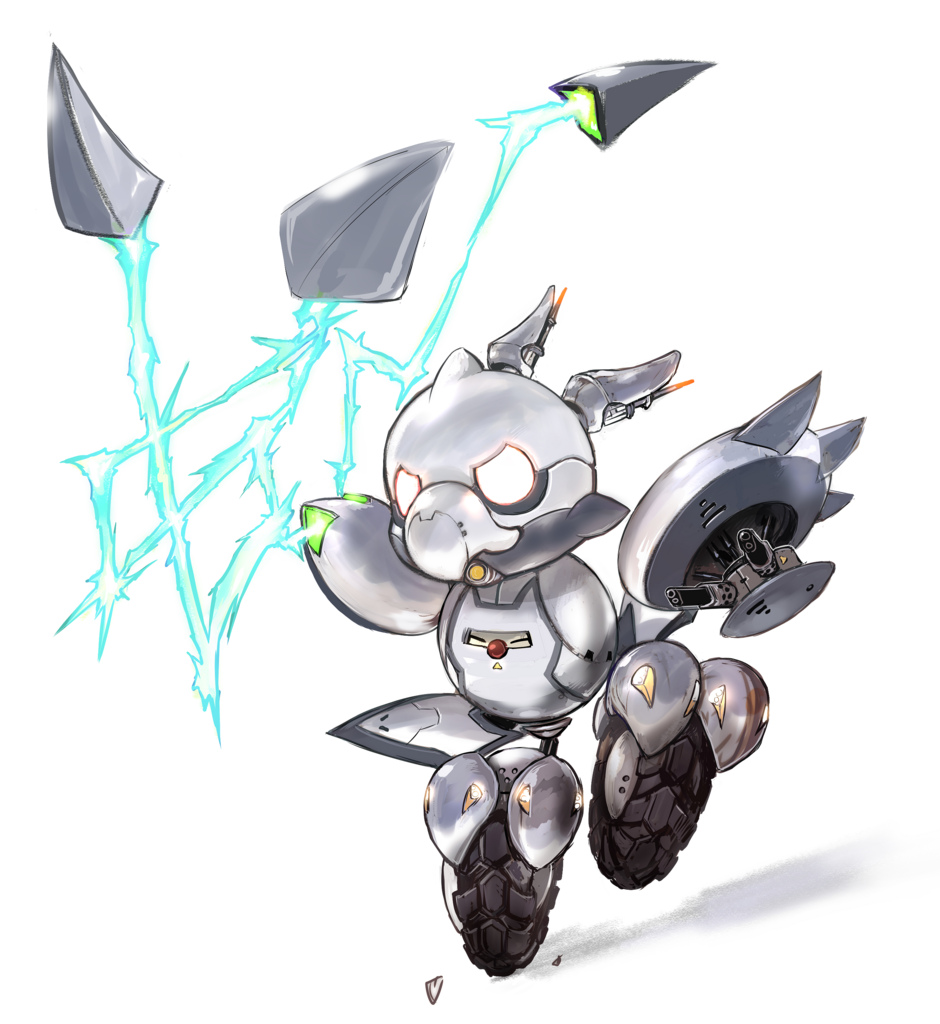 “I designed this as an enemy for World of Final Fantasy. I went for a futuristic mech-style design, keeping the details on the low side. However, I also incorporated a Gatling gun under Chocobo’s wing, and there’s a weapon in the beak as well. Plus, there’s a Moogle hiding on its belly… When I played the game, it turned out that this Chocobo’s voice was actually pretty cute, which warmed my heart.”

Chocobo’s Mystery Dungeon Every Buddy is out now on Switch.