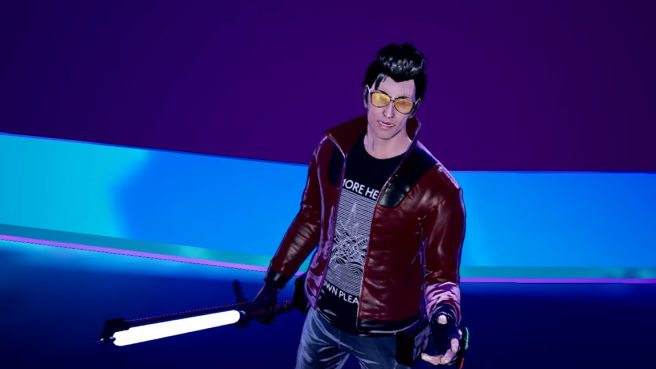 It has a bit of a somber tone, as the game’s director is essentially saying goodbye to Travis Touchdown and the series as a whole – at least for now. We also learn that the full name Suda51 envisioned for No More Heroes 3 is technically “No More Heroes 3 Final Bout – All-Out Galactic War”, but the title was trimmed in the end.

Here’s the full message from Suda51:

I hope everyone is getting by OK in the summer heat.

There is a brand new, exhilarating, action game in which the entire galaxy is thrown into a state of war that will hopefully help to blow away this sweltering heat and humidity, and it’s being released on August 27th.

This game is called No More Heroes 3 Final Bout – All-Out Galactic War! Or, it was going to be called that, but the subtitle was just too long so we ended up taking a hint from the Rocky series and simply going with No More Heroes 3 instead.

As hinted at with the “Final” thing, Travis Touchdown will finally be coming to the end of his final battle, and will be embarking on a much-deserved, long journey.

Join him as he goes absolutely buck wild in the Garden – no, Cosmos of Madness!

Now, carrying with it a thousand thoughts, I run along the Thunder Road once more. As one journey ends, the crimson bike falls into a deep sleep.

If it sounds like Suda51 is saying goodbye to No More Heroes in light of No More Heroes 3, it’s likely because the franchise will be taking a rest. He recently stated that No More Heroes 4 would likely be ten years away, if it happens. However, Suda51 also has interest in creating a spinoff starring Shinobu.