Posted on September 29, 2021 by Nicholas Serpa in Reviews, Switch 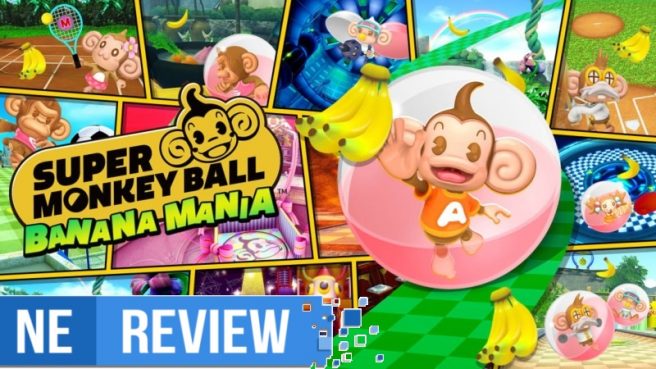 I experienced a wide range of conflicting emotions while playing Super Monkey Ball: Banana Mania. I often caught myself laughing, usually after successfully guiding my expressive, energetic monkey across a particularly gauntlet-esque stage with only seconds to spare. Just as often I found myself sighing or yelling “nonononoooo,” typically as my encapsulated simian plummeted off a platform to its doom… again. But no matter how well I was doing (or not) at playing Super Monkey Ball: Banana Mania, I was almost always having a wonderful time – and considering that this remaster contains stages and minigames from three of what may be the best games in the franchise, I expect I’ll be doing so for a long time.

Super Monkey Ball: Banana Mania may not be the entirely new release that fans of the franchise have been waiting almost a decade for, but it’s perhaps the next best thing: a generous package of stages, mini games and modes from the first three games in the series. And when I say generous, I mean REALLY generous. There are over three hundred stages present from Super Monkey Ball 1, 2, and Deluxe included in Banana Mania, all brought into the modern era with new models, textures and lighting. There are twelve party games included for local multiplayer up to four players, all of which can also be played solo. There are brand new challenge modes, and built-in secondary objectives for every stage and mode in the game. There are costumes and characters to unlock, online leaderboards and even a photo mode! Banana Mania is by far the biggest Super Monkey Ball game to date in terms of sheer content, so fresh players and returning fans alike will have plenty to experience.

Ostensibly, the Super Monkey Ball games have always been remarkably simple from a mechanical standpoint. Surprise: you control a monkey in a ball! And if monkeys in balls are good at anything, that thing appears to be rolling along a stage (or more often in my case: off the edge of it) to a goal within the time limit, collecting as many bananas along the way as possible. It’s mechanically simple, too – tilt the stage, and the monkey rolls in that direction. That’s pretty much all there is to it, yet it’s because of that simple premise that Super Monkey Ball can deliver tightly designed stages that consistently find creative ways to keep players on their toes. 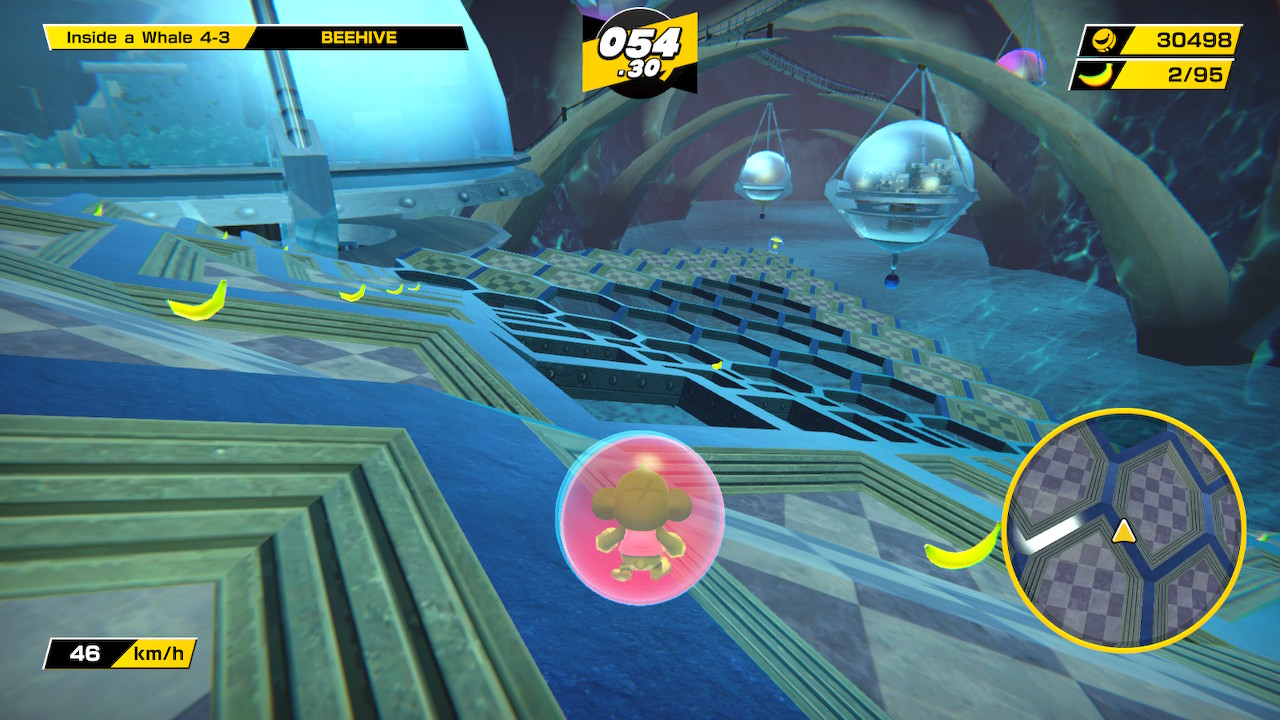 Stages in the main game start out as simple, flat surfaces, but quickly ramp up to being filled with an obscene number of hazards to avoid, from holes you can fall through to platforms that will launch you off the stage. You generally have 60 seconds to get to the end of a stage, each one littered with bananas to collect that are often located in precarious places. Collecting bananas isn’t essential to clear any level, doing so contributes to you overall point tally. Points can be redeemed in Banana Mania’s in-game store for new modes, characters, and costumes, so they are worth collecting. That said, the main objective is simply to reach the goal before the timer runs out – which is often enough of a challenge by itself!

I was surprised, actually, at just how challenging some of these stages could get. Maybe it’s my own lack of finesse, I experienced plenty of stages during my playthrough that were immensely tricky, even just a few worlds into the game. Some levels do have secret switches you can hit to, slay, slow down a fast-moving obstacle to make your life easier, but more often than not, the line between success and failure is simply a thin one you need to balance on (literally). Fortunately, the physics that drive Banana Mania’s gameplay are dependable and feel great. Characters respond how you expect them to (unless you’re using motion controls), and whether I was speeding through levels or falling off the stage every thirty seconds, it always felt like my own doing – a good sign of a balanced game. Still, learning a stage and achieving mastery of it often requires a substantial amount of trial and error, which may not be everyone’s cup of tea.

Fortunately, Banana Mania doesn’t really punish you for falling off a stage, so I also never felt like I was losing any progress. Dying simply results in you instantly restarting from the top of a level, and any bananas collected along the way remain in your score no matter what. In this way, Banana Mania smartly encourages experimenting and taking risks to collect as many as possible, even if the road ultimately results in failure. The forgiving structure of this system made the game significantly more fun to play than it otherwise might have been if it had adopted a stricter progression system. 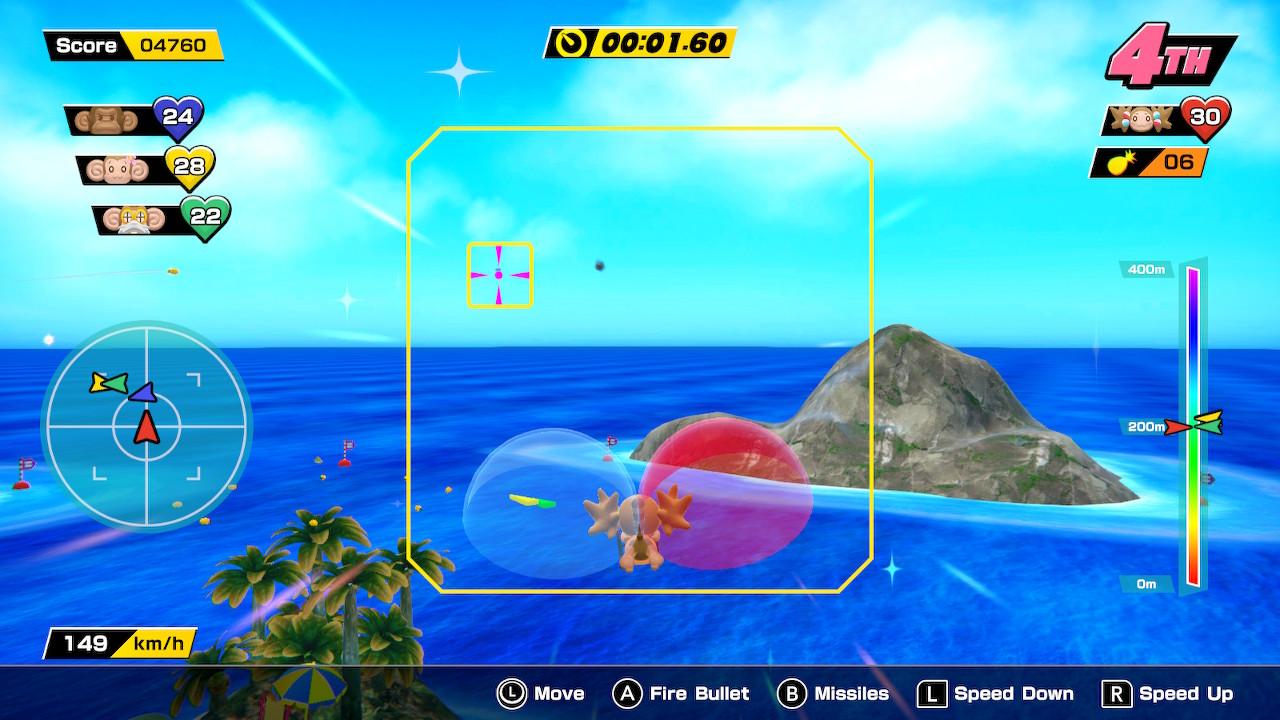 Banana Mania also includes a range of accessibility features for folks who may wish to make the game easier. Fall off a stage too many times, for example, and the game will offer to switch you over into an assist mode which doubles the amount of time you have to complete a level. You can also purchase a jump ability (a feature present in some of the newer games), letting you jump over a tricky pit or similar hazard. Other options include the ability to toggle slow-motion, turn on guide arrows that show the ideal path through each level, or even pay in-game currency to skip the level altogether (it’s worth mentioning that there are no microtransactions of any sort in Banana Mania). I didn’t depend on most of these features for my playthrough, but it’s great that they are here because they enable new or younger players to enjoy the game alongside seasoned players.

By default, players now have complete control of the camera, which doesn’t fundamentally change the game in any way but certainly makes it much easier to see where you are going. I never played the original games, but I can’t imagine playing Banana Mania without this feature – it’s been a critical tool for me to line up my monkey before trying to traverse narrow platforms, for example.

My favorite aspect of story mode – which only contains roughly a third of the stages in the game, believe it or not – is all of the option sub-objectives called Missions for each stage. Every level has at least two or three Missions you can attempt on top of beating the level itself, such as clearing it within a time limit, finishing a stage without stopping, or finding a secret exit goal. These challenges are a terrific way to earn extra points to unlock new characters and game modes, and I actually found myself really enjoying the extra layer of difficulty they presented. Not only are these sub-objectives present in the main game, but they actually apply to every stage and mode in the Banana Mania – even multiplayer modes – so true completionists will have quite a lot to see and do. 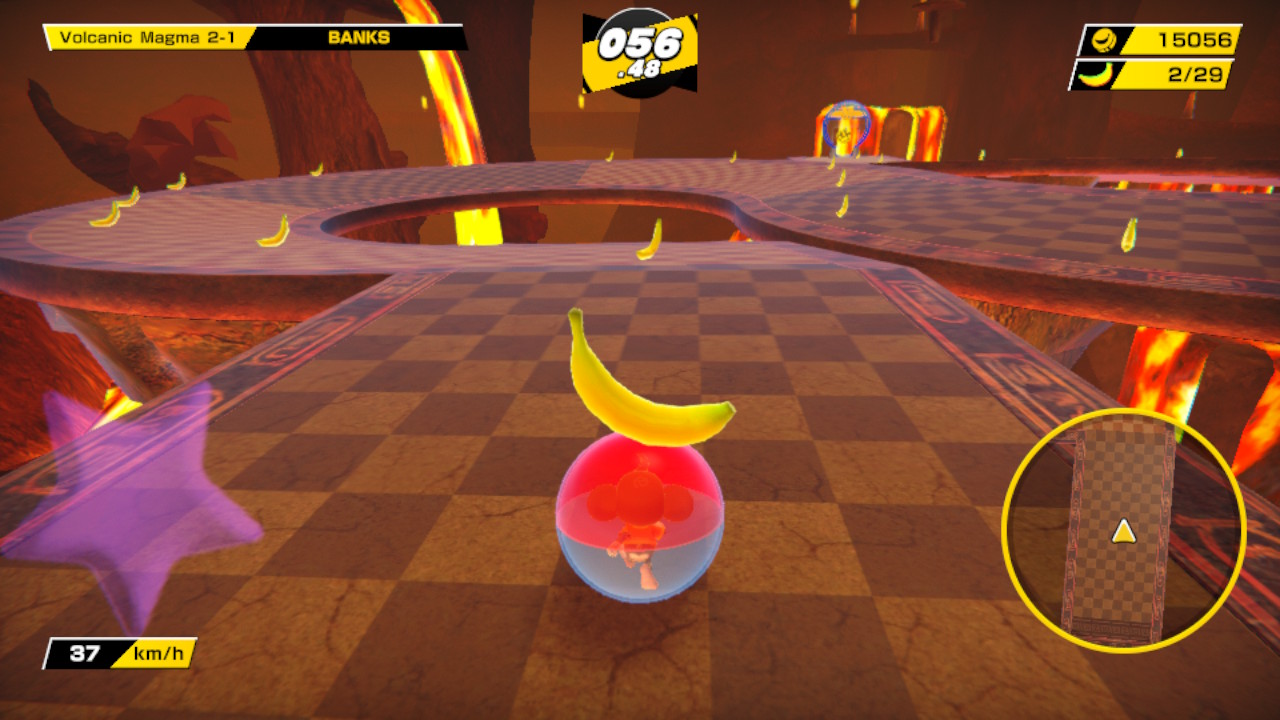 Other single player modes ramp up the challenge level even further. The appropriately named “Challenge Mode” takes players through collections of stages from the first two games with increasing difficulty levels as each batch of stages is cleared. Once you have enough points, you can also purchase additional, substantial single player modes like DX Mode, which contains every stage from Super Monkey Ball Deluxe. I also really enjoyed reverse mode – which modifies and flips around some of the original courses – and Dark Banana mode, which requires you to avoid collecting any bananas to clear the level. Some of these modes only have a handful of stages, but the game is so packed with content that I didn’t feel like I was missing anything.

Any of the game’s characters can be selected for any of the single player modes. In addition to the original cast (including the ever-iconic A-Ai and the lovable ape GonGon), it’s also possible to unlock special characters from other SEGA properties including Sonic the Hedgehog, Beat (from Jet Set Radio) and Kazuma Kiryu (from Yakuza). There’s certainly some novelty in playing as these characters for a few stages here and there, but they don’t affect gameplay in any way as they all control identically. It’s kind of funny seeing the game’s bananas replaced with golden rings or Stamin X energy drinks, but it was strange that none of the bonus characters had any sort of voice acting. You also can’t use the bonus characters in any multiplayer modes, and I’m not entirely sure why.

Speaking of multiplayer, the remaining bulk of the content in Super Monkey Ball: Banana Mania is its Party Games, which includes twelve experiences pulled from Super Monkey Ball Deluxe. While there’s no online play outside of uploading high scores to leaderboards, all games are playable in both single player and local multiplayer. Overall, this portion of Banana Mania is hit-or-miss. On one hand, some of the games centered around real-world sports – Monkey Billiards, for example – are surprisingly comprehensive, containing multiple variations of the game. Monkey Golf includes both mini and regular courses, and even some of the wackier games – like Monkey Dogfight – have a handful of arenas to play in. Generally, though, I found the party games based on sports to be the least exciting of the package, lacking in much of the personality and flair that makes some of the goofier games fun to play. I really enjoyed turning my monkey ball into a glider and trying to land on floating goals in Monkey Target, and even the basic light-gun game that was Monkey Shot was fun while it lasted. I can’t see myself revisiting most of these in the long run, but I thought they were fun enough while they lasted – and they were certainly better with friends. 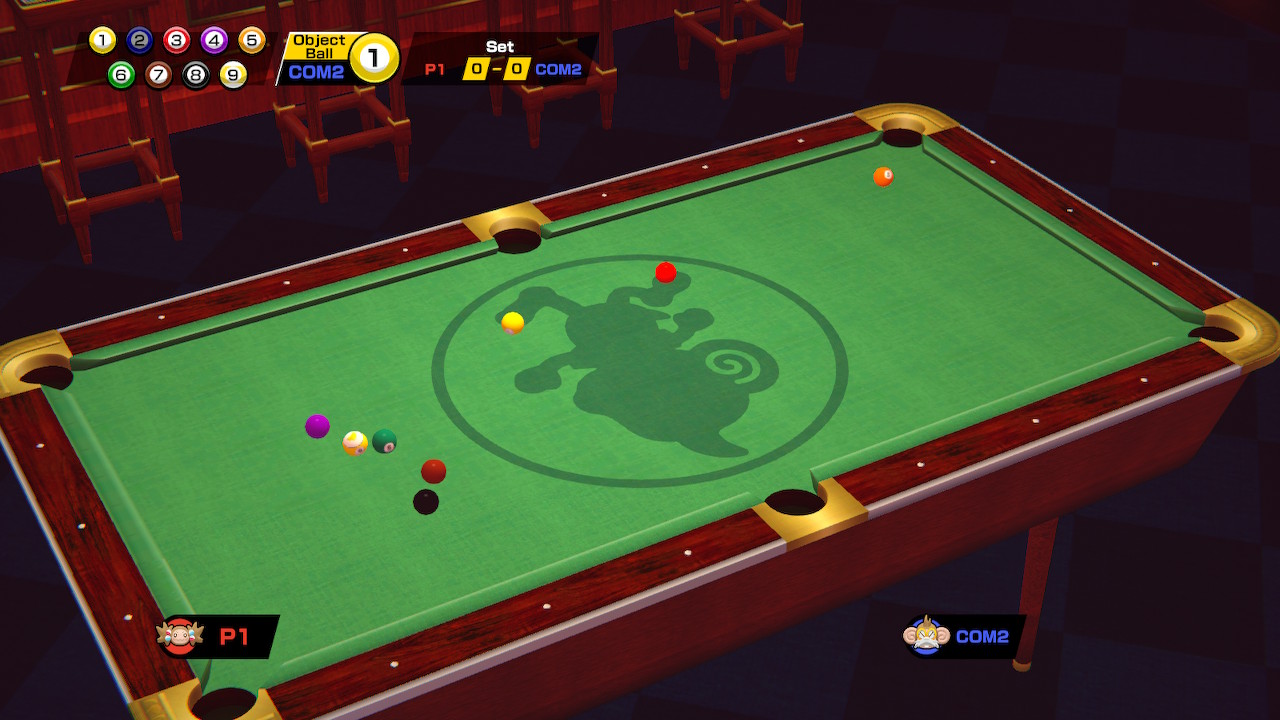 The whole game runs at a solid sixty frames per second on Switch, which I’m glad is the case because while the game looks good – certainly significantly sharper and brighter than the original release – it’s a pretty simple game aesthetically speaking. Part of that is just due to how courses in Banana Mania are designed, with the game removing any visual elements that would distract from the primary objective of being able to read and navigate the stage. It’s all bright, colorful, and fun – it doesn’t have as much personality as, say, Nintendo’s 3D platformers, but it’s still quirky in a way that few games are in 2021. That said, Banana Mania’s included photo mode never really made a lot of sense to me as there simply isn’t much spectacle to capture. Even with the unlockable filters and poses, I felt like viewing replays of stage clears was more useful than the photo mode, as its hard to truly capture the rush of nailing a tricky jump or clearing your best time in a single image.

At the end of the day, though, most people aren’t interested in Banana Mania because of the photo mode (and if you are, I would genuinely love to know why). This is a game that attempts to bring some of the best content that the Monkey Ball series has ever produced into a modern, polished package, and that’s something it absolutely delivers at.

Super Monkey Ball: Banana Mania is the best way to revisit some of the most iconic stages and party games of this franchise’s twenty-year history, and it excels at making what was old feel brand new, and easier to play than ever before thanks to new accessibility features. The breadth and variety of its content is remarkable, and the simple and quirky gameplay is both charming and infuriating in all the right ways. This is a game for both longtime fans and new players, and an easy recommendation for anyone with excitement or curiosity about this type of challenging precision-platformer.

Super Monkey Ball: Banana Mania copy provided by the publisher for the purposes of this review.