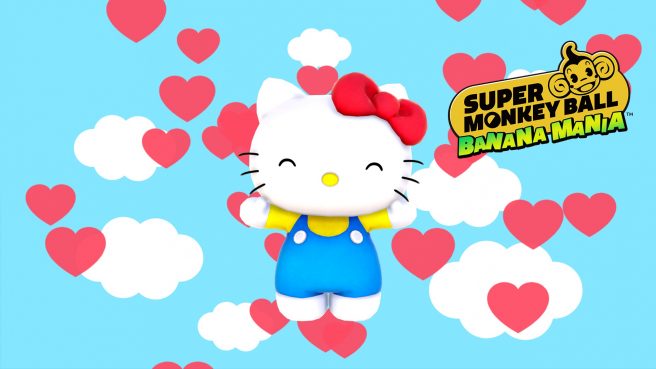 Hello Kitty is joining Super Monkey Ball: Banana Mania as a playable character, it’s been announced. This is the first character to be appearing outside of the SEGA family.

Here’s an official overview with a bit of additional information:

A cheerful and happy girl with a heart of gold, the London-born Hello Kitty joins AiAi and the monkey gang on their latest adventure in Super Monkey Ball Banana Mania. She brings friendship and kindness to Jungle Island, where she joins a star-studded team that includes Morgana from Persona 5, Beat from Jet Set Radio, Kiryu from Yakuza, and beloved duo Sonic the Hedgehog and Miles “Tails” Prower. As she always says, “You can never have too many friends!”

Hello Kitty will be available as paid DLC when the game launches on October 5. Pricing is set at $4.99.

In recent weeks, SEGA has revealed other star characters for Super Monkey Ball: Banana Mania. Sonic and Tails from Sonic the Hedgehog, Beat from Jet Set Radio, and Kazuma Kiryu from Yakuza are all appearing. Additionally, Morgana from Persona 5 was confirmed as post-launch DLC during Gamescom: Opening Night Live.