Posted on February 17, 2022 by Nicolas in News, Switch eShop, Videos 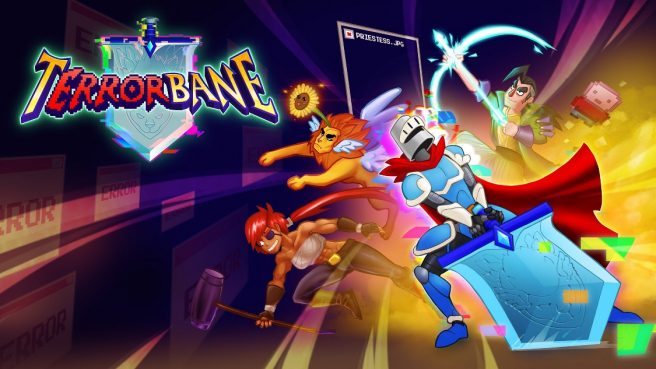 Publisher WhisperGames and developer BitNine Studio have announced the release date for their new game tERRORbane. The JRPG-inspired comedy adventure will release for Switch on April 1, 2022.

The game had been announced last year with an update at Gamescom confirming a Q1 2022 release window.

Here’s an overview for the game:

Choose your own glitch adventure! In tERRORbane the player explores scores of wacky errors and witty glitches, sprinkled with a dash of video game culture references. Help (or challenge) the Developer in his quest to fix his own game and collect all the bugs through multiple, unique playthroughs to become the bane of errors!

At first sight, a familiar, classic jRPG – tERRORbane offers more than exploration of quaint towns and spooky dungeons. Behind every corner and under each stone lies a callback to gaming history’s greats or an unexpected twist on classic mechanics. Hunting down every silly and quirky bug in the game will require a keen eye and several playthroughs, but each one will reward the player with a right laugh, or at the very least a nostalgic smirk.

– jRPG inspired gameplay with majestic lands and mighty foes
– Quirky characters and snappy dialogue
– No bugs!
– More references to video games than you can handle
– A friendly, although a bit cocky Developer
– Original take on classic mechanics
– Absolutely no bugs!
– Diverse lands that don’t fit into any one genre (Fantasy? Post-apo? We don’t know!)
– Alright, there might be a few bugs here and there, but you’ll help us find them, right?

Have a look at the new trailer for tERRORbane below:

tERRORbane will release digitally on Switch via the eShop.