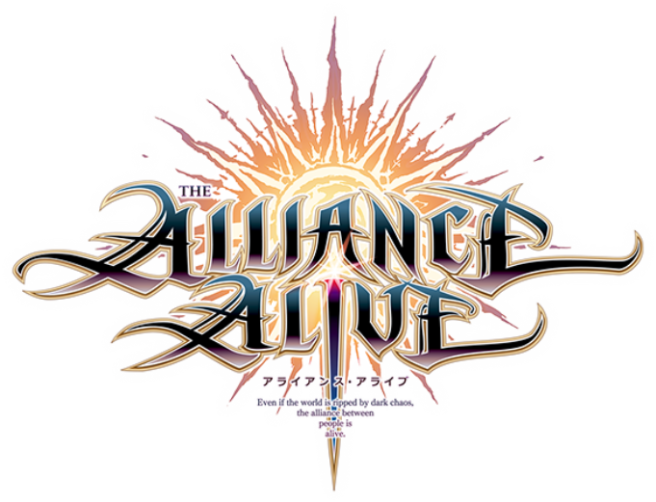 We first found out about The Alliance Alive, FuRyu’s new 3DS RPG, through Jump last week. Famitsu follows up with plenty of additional information in this week’s issue. Along with a preview of the game itself, the magazine also spoke with a few developers.

The Alliance Alive should be considered as a new classic RPG. It uses the standards of RPGs while reconstructing the genre with the latest technology.

In The Alliance Alive, the world has been conquered by the Demon Clan for hundreds of years. It’s a world split into a number of zones, each having a unique culture. A story is told about humans who oppose the demon’s domination.

The player controls the protagonist and moves them on a distant field map. The battle system uses Symbol Encounter.

As previously mentioned, there are nine main characters, and all of them are protagonists. They begin their journeys with different plans at first, but everyone will eventually gather and move towards a single goal.

1. Galil: A young boy under the “Night Crows” resistance. Has a mild personality but very passionate heart.
2. Ursula: A blonde young girl also under the Night Crows. She’s completely ignorant and keeps speaking her real intentions. She also always manipulates Galil.
3. Barbarosa: A ghost knight under Night Crows. His life was saved by Ursula’s father, so he swore allegiance to him.
4. Vivian: Daughter of a noble from Demon Clan. She likes studying history, is interested in human world, and has gentle personality.
5. Ignace: A demon butler serving Vivian. His personality emphasizes order and social rank just like the usual demon.
6. Rachel: A mercenary hired by the Seal Technique Guild. She has deep humanity/empathy and will act instantly once she makes up her mind.
7. Renzo: An adult informant under Night Crows. He’s optimistic but also has eyes that calmly looks at things.
8. Jean: A technique user in the Seal Technique Guild which serves the Demon Clan. He overlooks everything and does not act impulsively.
9. Tigi: A young girl researching the Black Flow. She calls herself a professor and creates many inventions.

Next, some interview excerpts with the developers:

– After researching what the world wants but what hasn’t been made by other companies yet, the conclusion and result was that they want a RPG with a balance between story and gameplay.
– They wanted the world setting to have variety so it will be fun to even just take a stroll.
– They dared going against the current trend by fixating on how to present the world map. They wanted to make an old-school world map that allows one to actually imagine the whole picture when actually strolling inside there.
– They handled the distances between towns and dungeons, as well as the frequency of battles so that it won’t become too stressful.
– There will be also vehicles that help expand the movement range.
– The reason why there are nine protagonists is that they want players to find their favorite characters among them. – Equipment can be freely changed to weapons like the greatsword and spear.
– Battle system will have features like learning new skills inside battles, and Awakening which raises stats.
– The stronger the enemies you fight, the faster your character’s stats will grow. There’s also a feature to raise the growth rate even further.
– The party will have up to five characters with formations available. There will be a Guild system that is used to strengthen the party.

The Alliance Alive launches in Japan next spring. Development is 65 percent complete.